Accessibility links
Swing-State Billboards Warning Against Voter Fraud Stir Backlash : It's All Politics Civil rights groups and Democrats complain that the billboards — many located in black, Hispanic and student-dominated neighborhoods — are meant to intimidate voters. The source of the billboards is an anonymous "private family foundation." 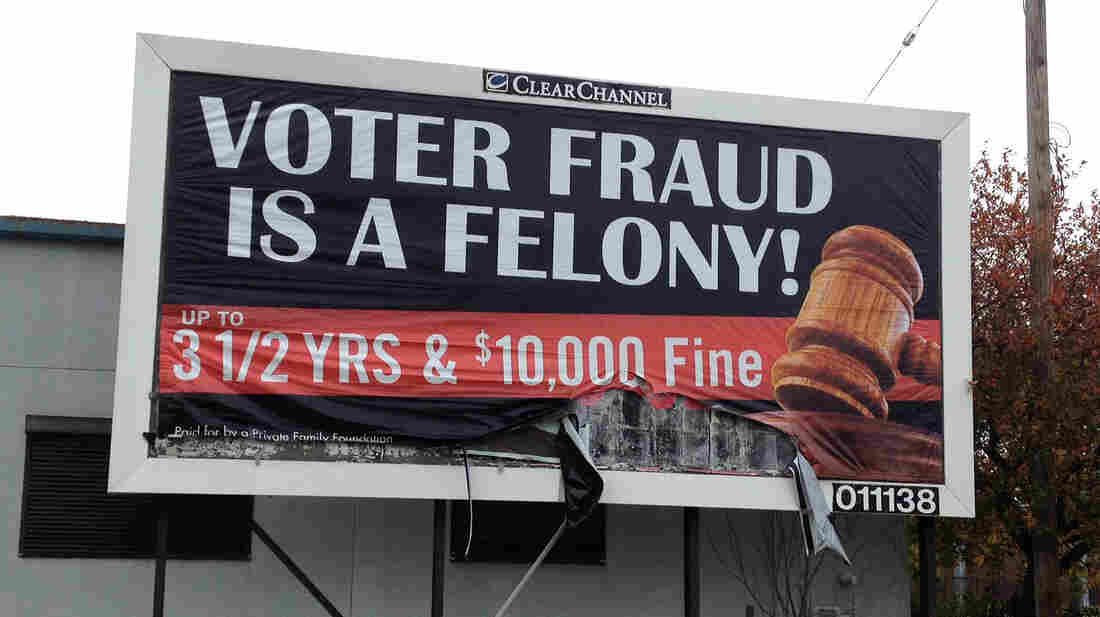 An anonymous "family foundation" is paying for billboards warning against voter fraud, like this one in a minority neighborhood on the east side of Cleveland. Clear Channel, which owns the space, says the anonymity violates its policies but it will not take the ads down. Ken Barcus/NPR hide caption 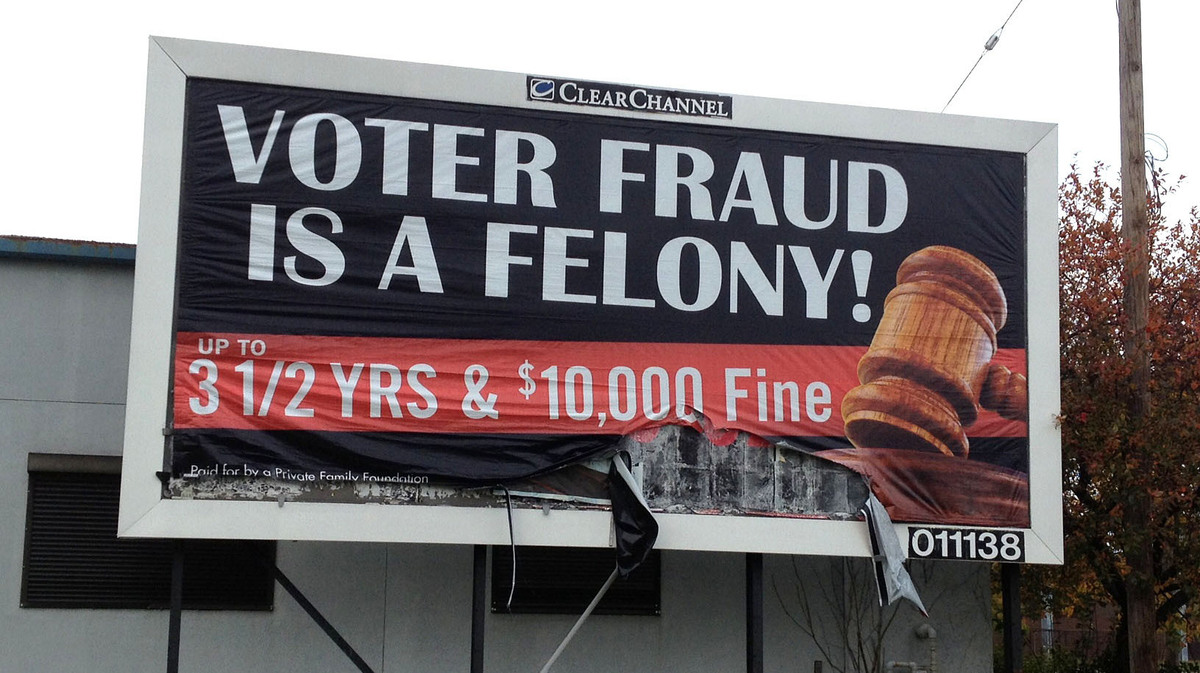 An anonymous "family foundation" is paying for billboards warning against voter fraud, like this one in a minority neighborhood on the east side of Cleveland. Clear Channel, which owns the space, says the anonymity violates its policies but it will not take the ads down.

Dozens of anonymous billboards have popped up in urban areas in the crucial battleground states of Ohio and Wisconsin. The signs note that voter fraud is a felony, punishable by up to 3 1/2 years in prison and a $10,000 fine.

Civil rights groups and Democrats complain that the billboards are meant to intimidate voters.

The billboards began appearing two weeks ago — 85 of them in and around Milwaukee, and an additional 60 in Cleveland and Columbus. The signs say in large white letters "Voter Fraud is a Felony!" There's a big picture of a judge's gavel and small letters at the bottom that say the ads are funded simply by a "private family foundation."

A number of liberal groups and labor organizations are demanding that the billboards be taken down.

"I think that these billboards are designed to suppress the vote. That is their intention," says Scot Ross, executive director of one of those groups, the Institute for One Wisconsin.

Ross notes that many of the signs are located in predominantly black, Hispanic and university neighborhoods.

"Just the concentration of them is a pretty good indication what the end goal is and who these anonymous billboards are targeting for voter suppression," he says. In other words, students, minorities and others who tend to vote Democratic.

And in such a close election, this has lots of people wondering who is behind the ads.

Clear Channel Communications, which owns the billboards, isn't saying. A spokesman wrote in an email to NPR that the advertiser asked to be anonymous. That goes against company policy, but he said the contract was signed by mistake and the company does not plan to take the billboards down.

"We will do all we can to ensure it does not happen again," the spokesman said.

He didn't respond to questions about why the company allowed almost identical billboards to go up anonymously in Milwaukee in 2010. They were also funded by a "private family foundation."

ColorOfChange, an online civil rights group, has launched a petition drive calling on Clear Channel to remove the ads. So far, more than 65,000 people have signed on.

"We're going to work incredibly hard to find out who's behind these," says Rashad Robinson, the group's executive director.

Even though the ads are factually correct, Robinson says, they imply that voter fraud is rampant.

"In fact, you're more likely to get hit by lightning than to have in-person voter fraud," he says. "These anonymous donors are not running billboards warning us about getting hit by lightning. They are running these billboards in black and brown neighborhoods with the real intention of scaring people."

He adds that it doesn't help that Clear Channel is owned in large part by Bain Capital, the former company of Republican presidential nominee Mitt Romney — although the acquisition occurred long after Romney's departure.

To some, all of this is much ado about nothing.

Nathan Conrad, a spokesman for the Republican Party of Wisconsin, says the party has no connection to the billboards, although it does take the issue of voter integrity very seriously.

"My impression and understanding is that they simply state what the law is in the state of Wisconsin," says Conrad. "And that being said, I'm not sure how it would intimidate anyone who was not planning on voting illegally going into the election season."

Larry Gamble of Wisconsin GrandSons of Liberty, a citizens group also concerned about voter fraud, says he doesn't think the billboards are intimidating or racist. He notes that two of them are near his home, well outside Milwaukee.

Instead, he thinks the ads are educational, because they inform people who might not know that voter fraud is a serious crime.

"If it's somebody that might be coerced into trying to game the system and vote twice or manipulate the elections process somehow, it sends a very clear signal, and maybe it would be a wake-up call for that individual," Gamble says.

Even if the billboards are intended to intimidate voters, there's no evidence such tactics work — that they don't instead have the opposite impact.

A coalition of billboard opponents called Election Protection hopes so. They put up new billboards Thursday in Milwaukee and Cleveland encouraging people to vote and stand up for their rights.