Accessibility links
During Debates, Silence On Some Issues Was Deafening : It's All Politics Amid all the talk of the economy and the Middle East, topics such as climate change, gay rights, campaign finance and the Supreme Court were completely ignored during the three presidential debates.

During Debates, Silence On Some Issues Was Deafening

During Debates, Silence On Some Issues Was Deafening 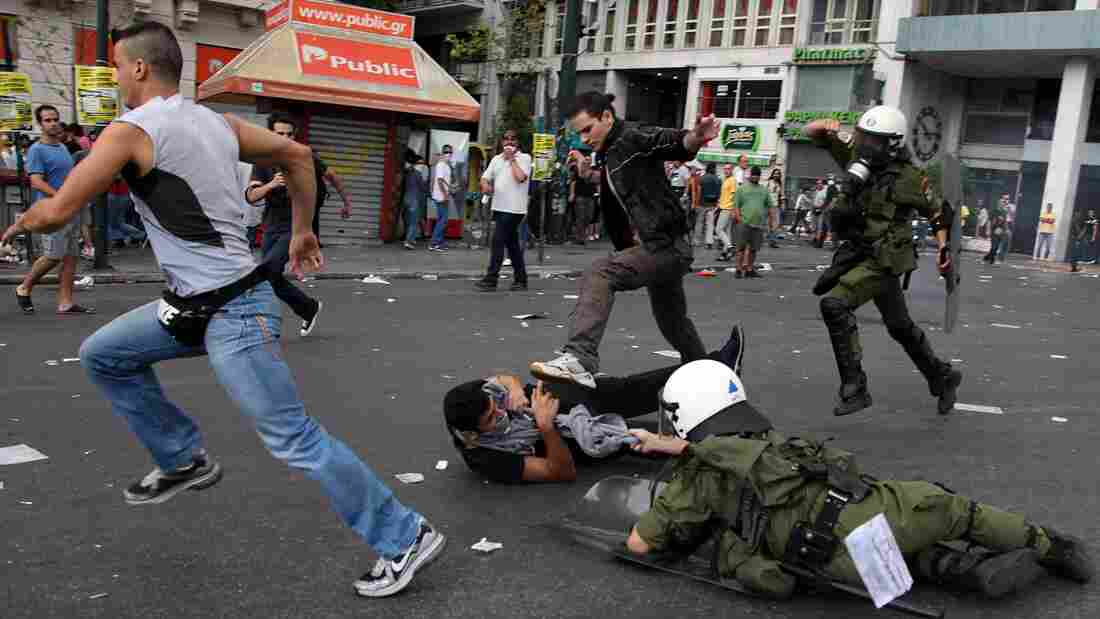 Demonstrators clash with riot police in Athens while protesting the visit of German Chancellor Angela Merkel on Oct. 9. The euro crisis is one of several issues that came up little, if at all, during the U.S. presidential debates. Max Gyselinck/AFP/Getty Images hide caption 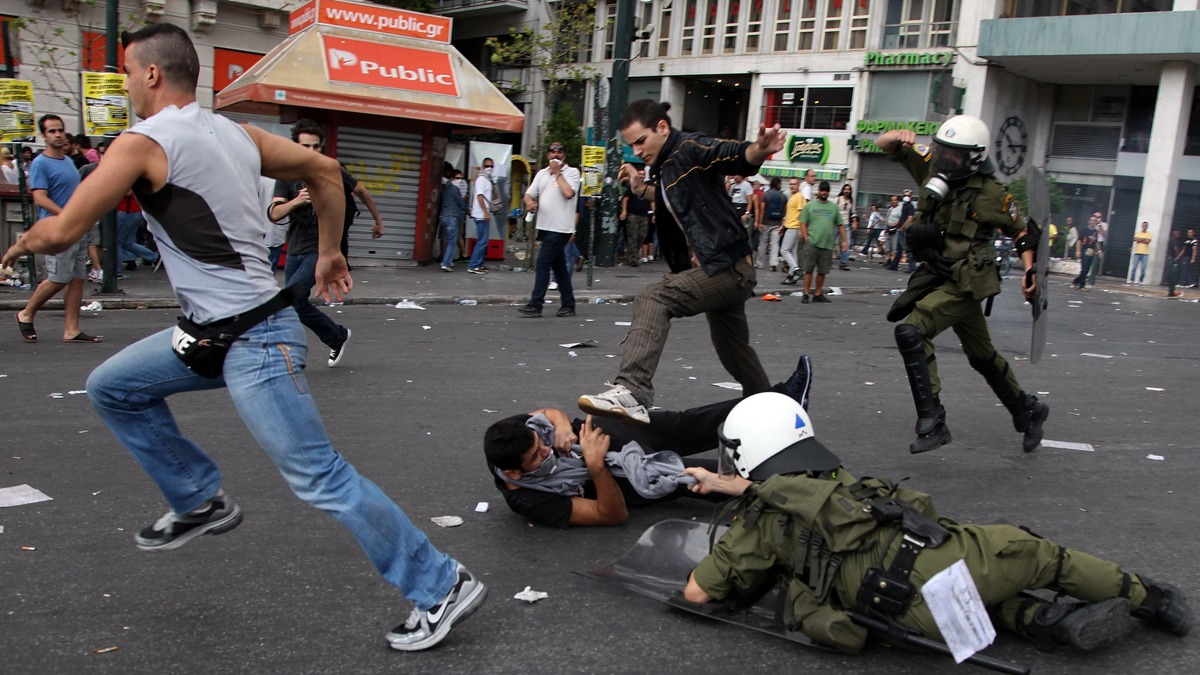 Demonstrators clash with riot police in Athens while protesting the visit of German Chancellor Angela Merkel on Oct. 9. The euro crisis is one of several issues that came up little, if at all, during the U.S. presidential debates.

It's possible that the presidential debates will be remembered mainly for trivia — Big Bird, binders and bayonets.

But Mitt Romney and President Obama did discuss issues of paramount importance, including taxes, entitlements and the role the U.S. should play in the Middle East.

Those issues — and above all else, the economy — dominated discussion throughout the debate season. That meant other important topics such as immigration were barely mentioned, while others never came up at all.

To some extent, Romney and Obama had to respond to the topics moderators were most interested in. Still, they managed to talk about any issue they wanted — especially during Monday's foreign policy debate, in which domestic issues were discussed repeatedly and at some length.

Here are a few topics that were not touched on at all over the course of their three debates:

The issue had gained resonance this summer after a series of powerful storms and widespread drought. CNN's Candy Crowley, who moderated last week's town hall-style debate, said there was a question about climate ready to go from the audience, but "we knew that the economy was still the main thing."

Romney criticized Obama's spending on clean energy companies more than once, while Obama criticized Romney, during last week's debate, for his bragging that as governor of Massachusetts he shut down coal-powered plants.

But neither addressed climate change directly.

"The president as a matter of foreign policy will be called upon to engage with climate change with other countries around the world," says Angela Anderson, the head of the energy and climate program at the Union of Concerned Scientists, which advocates policies to address climate change.

"There is a real confusion on the part of two campaigns in how to talk about this in a way that doesn't polarize the issue further," she says.

Through much of the spring, there was a lot of talk about how Obama's chances for re-election rested largely on the shoulders of Angela Merkel, the chancellor of Germany. The U.S. economy could be put at risk by a serious failure of the economies within the eurozone.

Things have calmed down on that front. "There was a change of heart in Germany about forcing Greece out of the euro, at least right now," says Desmond Lachman, a resident fellow at the American Enterprise Institute. "This kept Greece out of world headlines and took away an issue that Romney might have more forcefully exploited."

Still, as Lachman points out, Romney did warn that the U.S. could go the way of Greece if Obama's policies were continued. But neither candidate talked about how the continuing struggles of Europe could affect the U.S. economy. And Obama didn't try to point to the European recession as a warning of where Romney's policies of austerity might lead the U.S.

This is the first presidential campaign since Watergate in which neither candidate is accepting public financing of his campaign.

Perhaps it's not altogether surprising, then, that campaign finance did not come up in the debates. "Who wants to draw attention to the fact that Obama has raised more money than any candidate in history, and Romney is doing everything he can to keep up?" says Meredith McGehee, policy director for the Campaign Legal Center, which supports campaign finance restrictions.

McGehee suggests that the Supreme Court's decision in Citizens United, which allowed direct corporate spending on campaigns and indirectly opened the door to free-spending superPACs, may have left the candidates with limited policymaking opportunities to discuss.

Still, even if Obama might have been open to charges of "hypocrisy" had he decried the influence of big money in politics, as McGehee suggests, it's a little surprising that he didn't seek a chance to exploit the issue.

Gay rights have been a major issue during Obama's presidency, from his signing of a bill to allow gays to serve openly in the military to his announcement this spring that he supports same-sex marriage.

The fact that these issues were entirely absent from the presidential debates itself constitutes a victory, says Fred Sainz, vice president of Human Rights Campaign, a gay-rights group.

"It is a measure of progress in terms of how far the LBGT issue has come in that it is no longer an issue," says Sainz, referring to the lesbian, bisexual, gay and transgendered community.

He notes that public support of gay rights has grown enormously over the past decade, with even gay marriage — which was a potent tool for President George W. Bush in 2004 — now enjoying bare majority support in polls.

"Gov. Romney stays away from the issue like I stay away from five-day-old tuna fish salad," Sainz says.

Gay marriage has never been approved by voters, while it's been banned by voters in 32 states. On Nov. 6, voters in Washington state, Maine and Maryland will vote whether to allow gay marriages, while Minnesota voters will decide whether to approve a ban.

"Same-sex-marriage advocates are wrong when they suggest that gay marriage is inevitable throughout the United States," says Chip White, spokesman for Preserve Marriage Washington, which is opposing the gay-marriage measure in Washington state.

The possibility of appointments to the Supreme Court is typically an underdiscussed issue in presidential campaigns.

Still, it's notable that none of the moderators asked Obama or Romney about it, as there have been four new justices appointed since 2005, while four of the current justices are each at least 74 years old.

It's possible that the candidates' own reticence had something to do with the fact that discussing Supreme Court picks might have brought up all manner of controversial topics, including same-sex marriage, affirmative action and abortion.

Obama was eager during the debates to present himself as a champion of women and reproductive rights. But neither he nor Romney ever uttered the word "abortion." (Abortion was raised during the vice presidential debate.)

"The risk for Obama in reminding women that Roe could be overturned is that creates an opening for Romney to say that you could lose your gun rights if you get some more Democratic appointees," says Dorf, the Cornell professor, who was a clerk for Justice Anthony Kennedy.

Dorf notes that Romney presented a more moderate image during the debates than he had throughout much of the campaign. He may not have wanted to remind voters that he would very likely appoint conservative justices.

"Each of them would be likely to nominate justices who will take positions on some things that will be unpopular with a majority of Americans," Dorf says.