Accessibility links
Hurricane Sandy Throws A Wrench Into Early Voting : It's All Politics The fearsome storm has shut down early voting in multiple states and disrupted the presidential candidates' campaign schedules. Sandy may wreak havoc as it claws up the East Coast, but voting experts say its impact may fizzle come Election Day. 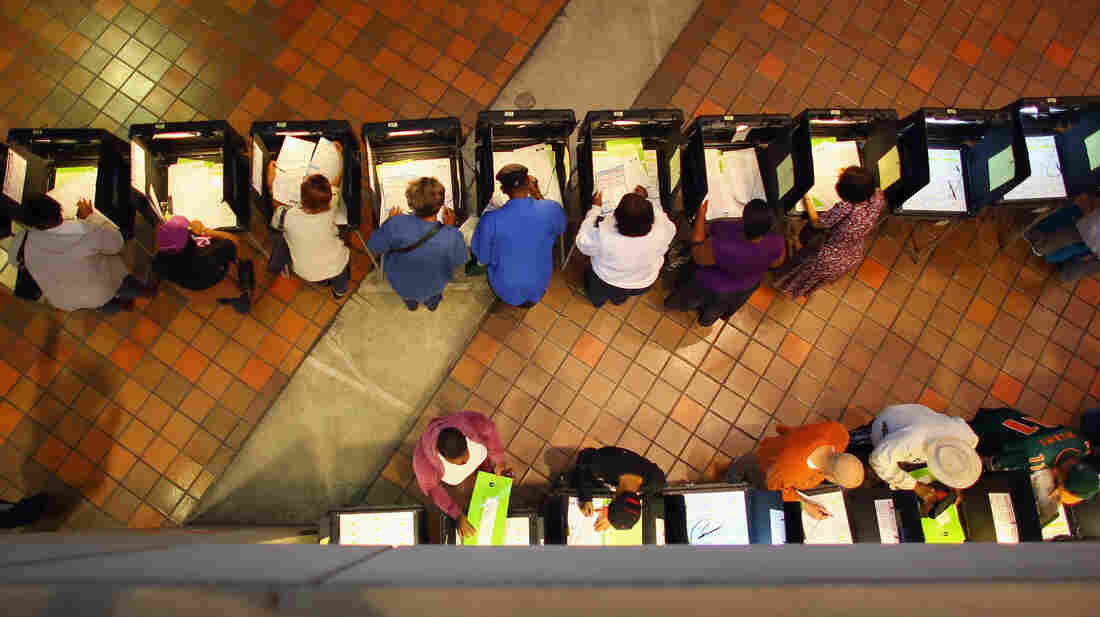 Early voters fill out ballots in Miami. Voting experts say Hurricane Sandy isn't likely to cause major disruptions — but that it would have been a far different matter had Florida taken a direct hit from the storm. Joe Raedle/Getty Images hide caption 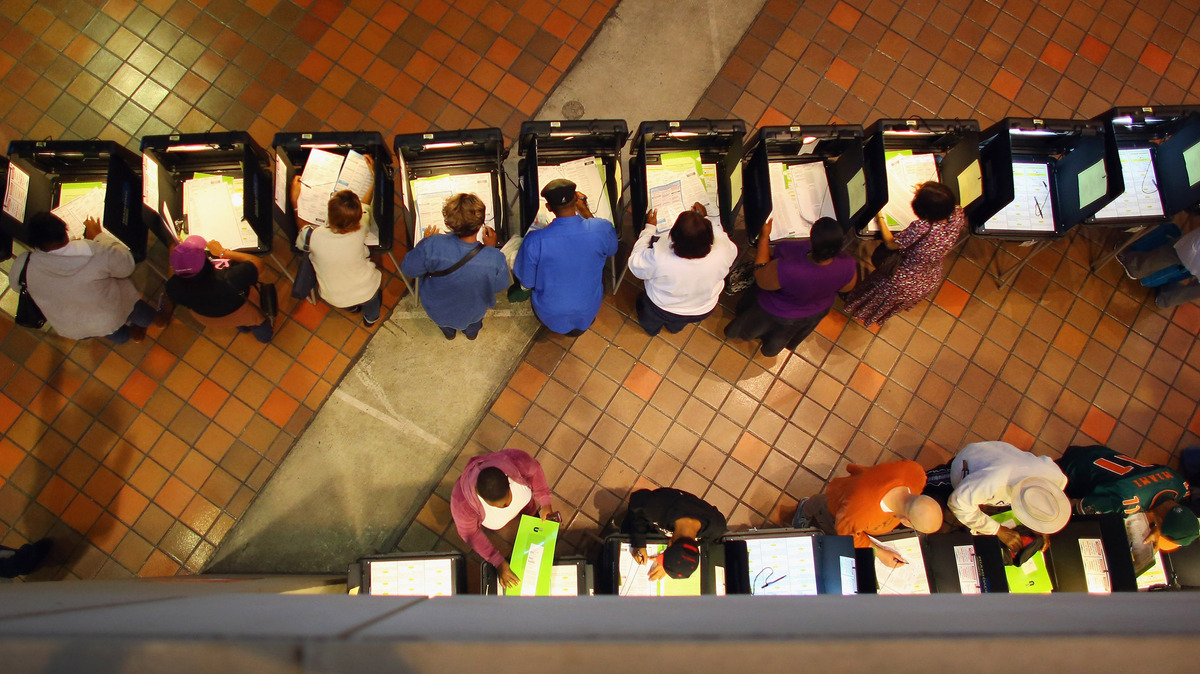 Early voters fill out ballots in Miami. Voting experts say Hurricane Sandy isn't likely to cause major disruptions — but that it would have been a far different matter had Florida taken a direct hit from the storm.

As Hurricane Sandy continues its slow progress toward the East Coast, thoughts of voting aren't uppermost in most people's minds. Nevertheless, state and local officials are scrambling to accommodate early voters as best they can.

Depending on how the storm ultimately plays out, Sandy isn't expected to have much effect on the outcome of the presidential race. Most of the states in its path are not considered competitive.

But the storm is already having an effect on campaigning. President Obama canceled a Florida rally on Monday to monitor events from the White House. Republican Mitt Romney scuttled campaign events in Virginia and New Hampshire, instead spending more time in the Midwest.

Obama may get a boost from assuming a "take-charge posture," says Larry Sabato, who directs the University of Virginia's Center for Politics. But of course the president would be held responsible for any foul-ups in terms of disaster response and relief. While decamped in the Midwest, Romney will also want to appear sensitive to the ravages of the storm.

Remember that Republicans postponed the opening of their national convention in August owing to the proximity of the storm that became Hurricane Isaac. Democrats also had to reshuffle some events during their gathering.

Both campaigns have announced they are suspending fundraising email appeals in several states affected by Sandy, although they haven't pulled their TV ads.

In terms of actual voting, it remains to be seen whether Sandy will matter much. "We're certainly seeing some [polling place] closures now from Sandy," says Michael McDonald, a voting expert at the Brookings Institution.

But McDonald points out that most of the states in the storm's path don't allow early voting without excuses, unlike swing states such as Iowa and Florida.

"If this was a direct hit on Florida, then we would be having a much different discussion about the impact of this storm," he says. "With ample time for local officials to respond and utility companies to restore power, we should have voting places up and running in most places by Election Day."

Lines were long for early voting this weekend in Maryland and the District of Columbia, as people sought to cast ballots while they could. Early-voting polling places were shuttered in both jurisdictions Monday.

Both Maryland and the District are expected to vote Democratic in the Nov. 6 presidential election. In terms of the Electoral College, Sandy's impact could be greatest in Virginia.

"Virginia is indeed the swing state in the storm's sweep," Sabato says.

Virginia allows early voting only under certain conditions, such as being absent from the state. Only 13 percent of voters there cast ballots ahead of Election Day in 2008.

The commonwealth's board of elections has decided to allow people to cite Hurricane Sandy as a reason they need to vote early.

"Our message to local election officials was to accommodate voters who would likely be impacted by the storm," Justin Riemer, the election board's deputy secretary, told NPR's Pam Fessler. "The guidance was focused particularly on voters who are concerned that they may not be able to travel to their polling place locations on Election Day due to possible power outages, impassable or obstructed roads, temporary relocation, etc."

Some polling places in the densely populated suburbs of Northern Virginia were closed Monday, but some others were open in the morning.

Northern Virginia is a key battleground not just for the presidential election but for a close U.S. Senate race as well. Tim Kaine, the Democratic Senate candidate, sent an email to supporters asking them to take down yard signs for fear they might turn into projectiles during the massive storm.

Some early-voting stations were closed in coastal North Carolina counties, and the hurricane could ultimately affect Ohio. But most of the other states getting drenched are not swing states in the presidential contest. And they may recover in time to keep turnout at normal levels.

To accommodate potential voters inconvenienced by the storm, Connecticut Gov. Dannel Malloy, a Democrat, extended the voter registration deadline two days, to Thursday. He made a similar allowance last year for municipal elections, in light of a freak snowstorm.

McDonald, the Brookings scholar, says early voting in most places should be accommodated by the time the storm is through. New Jersey, he notes, allows no-excuse early voting, but early voting there is conducted by mail, so disruptions should be minimal.

In general, he says, the biggest impact may be on old-fashioned in-person voting on Election Day. Election officials in some jurisdictions will now be delayed running their usual last-minute preparations.

Some poll worker training has been canceled in Northern Virginia, for instance.

"Election officials are already stressed when you're going into an Election Day," McDonald says. "They're going to have to work even harder, because now they have all the contingency plans they have to consider."