Accessibility links
NPR Poll Finds Presidential Race Too Close To Call : It's All Politics The latest NPR Battleground Poll shows former Massachusetts Gov. Mitt Romney holding the narrowest of leads in the national sample, but trailing President Obama in the dozen states that will decide the election. The poll adds evidence that the Oct. 3 debate between the two men redefined the race. 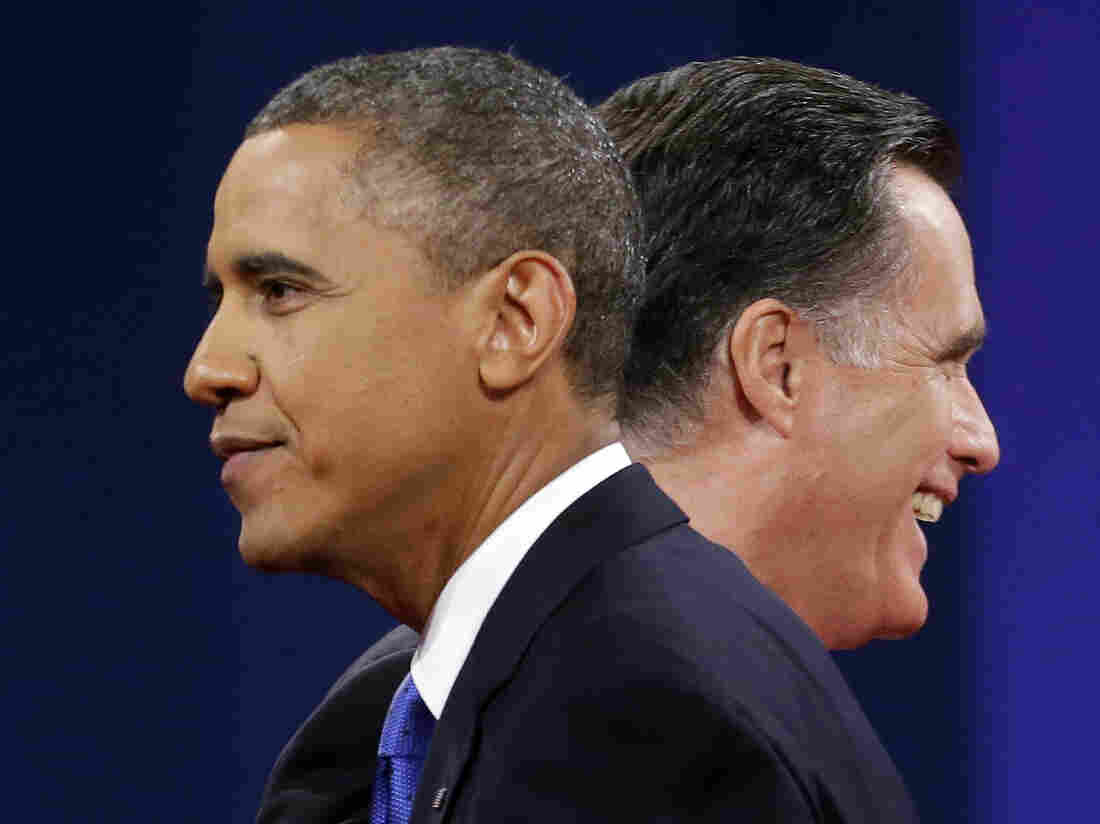 A new NPR poll shows the outcome of the Nov. 6 election is too close to call. Mitt Romney leads President Obama nationwide; Obama leads Romney in key battleground states. Both leads are within the poll's margin of error. Pablo Martinez Monsivais/AP hide caption 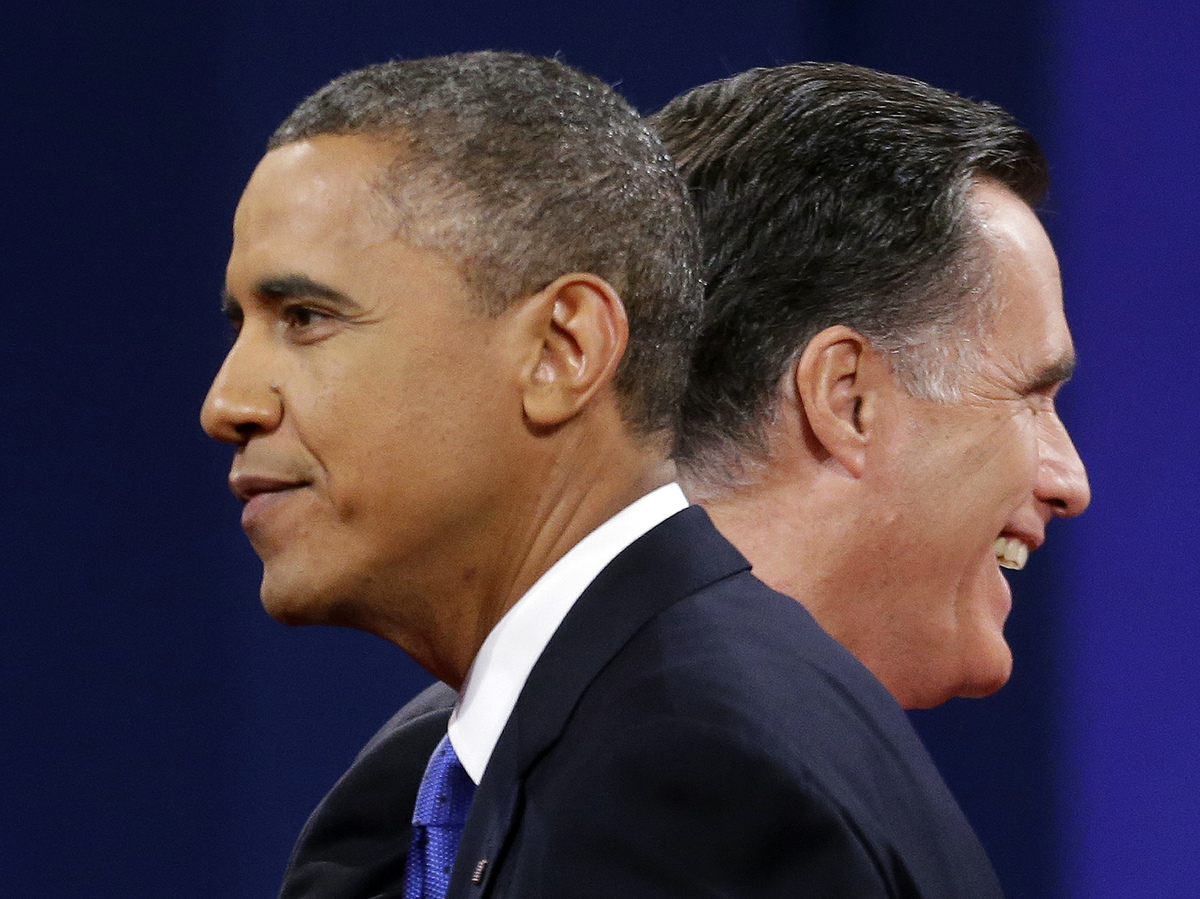 A new NPR poll shows the outcome of the Nov. 6 election is too close to call. Mitt Romney leads President Obama nationwide; Obama leads Romney in key battleground states. Both leads are within the poll's margin of error.

The latest and last NPR Battleground Poll for 2012 shows former Massachusetts Gov. Mitt Romney holding the narrowest of leads in the national sample, but trailing President Obama in the dozen states that will decide the election.

The poll adds evidence that the Oct. 3 debate between the two men redefined the race. But the movement toward Romney that emerged after that night in Denver also seems to have stalled after the race drew even — leaving the outcome difficult to call.

The former governor had a 1 percentage point lead overall in the head-to-head preference poll. The president led by 4 percentage points in the smaller sample of 466 voters in 12 states: Nevada, Colorado, New Mexico, Iowa, Wisconsin, Michigan, Ohio, Pennsylvania, New Hampshire, Virginia, North Carolina and Florida. Both the Romney lead and the Obama lead were within the poll's margin of error.

That was a mirror image of the result of the first NPR poll in July, which found the Democrat ahead by 2 points in the national poll of likely voters, but tied with his Republican rival in the battleground at 46 percent each.

A second NPR poll, released on the day of the Denver debate, found the president had opened a 7-point lead nationally and a 6-point lead in the battleground. That poll included slightly more voters who identified themselves as Democrats than had the first poll or the one just completed.

The poll was the third conducted by this year's iteration of the NPR bipartisan polling team. The Republican pollster Whit Ayres of Resurgent Republic was joined in the effort by Democratic counterpart Stan Greenberg of Democracy Corps (and the firm of Greenberg, Quinlan & Rosner). Their joint report was based on interviews with 1,000 likely voters conducted from Tuesday through Thursday last week (Oct. 23-25). The margin of error for such a poll is 3 percentage points for the national sample and 4.5 percentage points for the smaller sub-sample (462 respondents) in the battleground states.

Four weeks earlier, just before the first debate in Denver, the NPR team produced a report showing the president ahead by 7 points nationally and by 6 points in the battleground. That poll included a higher-than-usual elevated number of respondents who identified themselves as Democrats (7 points more than Republicans). The current poll shows those identifying with each of the two major parties to be closer to even (4 points).

Romney forces have maintained throughout October that the Denver debate transformed the dynamics of the race, and by some measures the former Massachusetts governor has been on the march. But after closing the gap between himself and the president, Romney's gains seemed to hit a wall — at least temporarily.

Ayres, the Republican half of the NPR polling team, said most of the gains for Romney had come among independents, who went from favoring Romney by a few points before the debates to favoring him 51 percent to 39 percent after the debates. In 2008, candidate Barack Obama won among independent voters.

"So were it not for the debates," Ayres concluded, "I think Obama would be cruising to a victory right now. Because of the debates, this is going to be an incredibly close election."

But Ayres' Democratic counterpart, Greenberg, said he still saw the latest poll as evidence the president would be re-elected.

"For me the main takeaway is Barack Obama will be president if this poll holds," he said.

While conceding that the debates had helped Romney establish himself with a slice of the electorate, Greenberg insisted the real battle was in the target states where the president still maintains a small lead. He called it "the kind of lead that could allow you to be re-elected as president."

Both pollsters agreed the element of Hurricane Sandy and the protracted coverage of storm damage and cleanup would distract voters in the final days of the campaign. The aftermath of the storm may also make it more difficult for early voting to continue as it has in some Eastern states, and even more difficult than usual for pollsters to reach voters to interview.