Accessibility links
There's No Contingency Plan If Disaster Strikes On Election Day : It's All Politics What if Hurricane Sandy had waited a week to strike the East Coast? There's no contingency plan in place for rescheduling an election if a storm or terrorist attack wiped out power in multiple states while voting was taking place. Says one expert: "We'll ignore it until it happens, and when it happens, we'll figure it out."

There's No Contingency Plan If Disaster Strikes On Election Day

There's No Contingency Plan If Disaster Strikes On Election Day 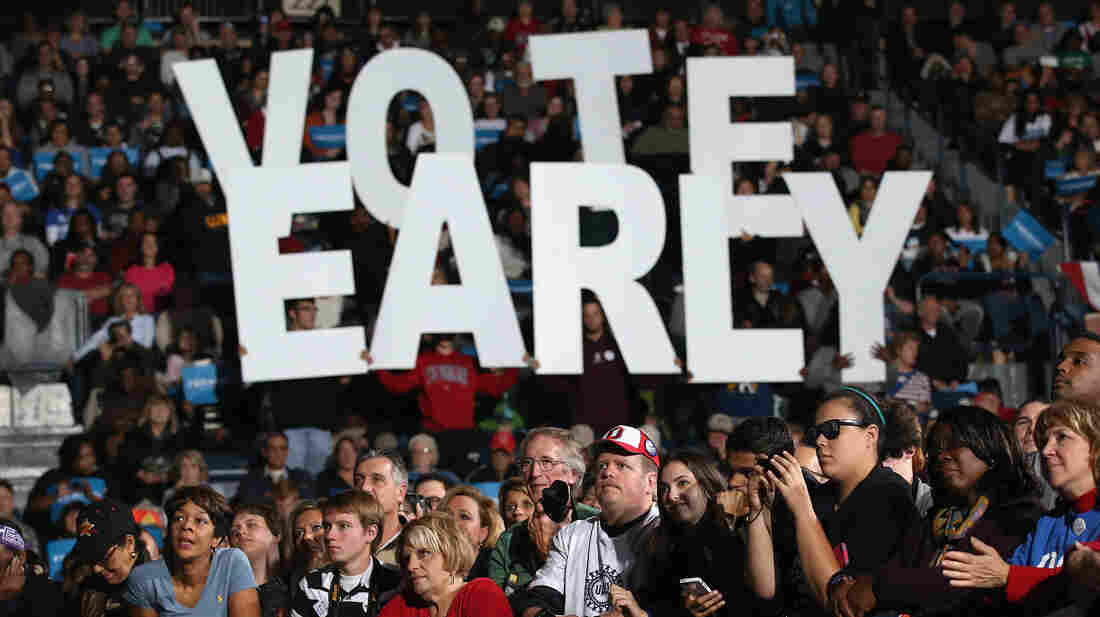 A crowd listens at a rally with former President Bill Clinton and Vice President Joe Biden in Youngstown, Ohio, on Monday. President Obama canceled his appearance to return to the White House to monitor Hurricane Sandy. Both campaigns have urged supporters whose states allow early voting to vote as soon as possible. John Moore/Getty Images hide caption 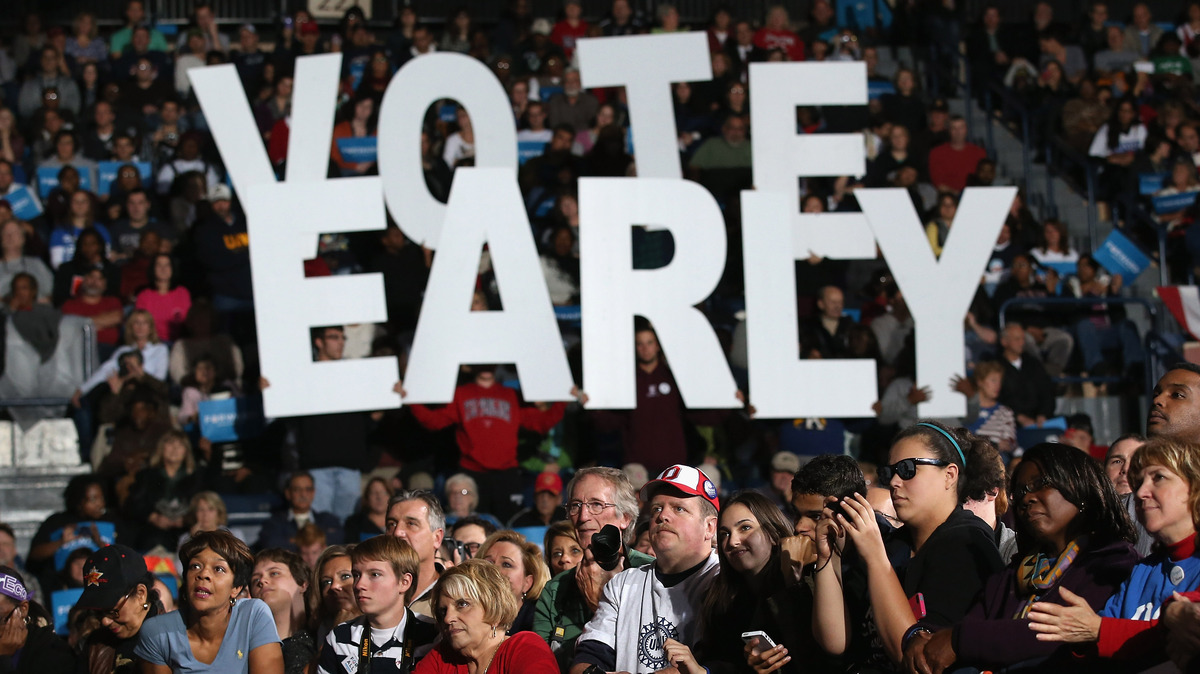 A crowd listens at a rally with former President Bill Clinton and Vice President Joe Biden in Youngstown, Ohio, on Monday. President Obama canceled his appearance to return to the White House to monitor Hurricane Sandy. Both campaigns have urged supporters whose states allow early voting to vote as soon as possible.

Suppose Sandy had struck a week later. With power out across multiple states, how would people be able to vote on Election Day?

"If this were happening next week, we have no provisions for dealing with this in law," says Thad Hall, a political scientist at the University of Utah.

Many states have contingency plans for conducting elections in the wake of a natural disaster or terrorist attack. But they tend to focus on strictly local effects — moving polling places over to a neighboring precinct, for example.

There's no controlling authority when it comes to rescheduling presidential voting when roads are blocked and power is down in several states at once, according to the Congressional Research Service.

When terrorists struck Manhattan on Sept. 11, 2001, New York City suspended its mayoral primary, which was to be held that day, delaying the vote for two weeks.

But postponing the vote in a single city or state — or across multiple states — would skew the result of a national election, says Curtis Gans, director of the Center for the Study of the American Electorate at American University.

"We don't have a contingency for major disasters on Election Day," he says. "If [Sandy] occurred next Monday and Tuesday, there'd be an enormous number of people who couldn't vote."

Local officials frequently call on courts to allow a little more time for voting when there are blizzards or power outages within a contained area. On Colorado's primary Election Day in June, wildfires were raging across 12 counties, but vote counting continued.

"The people in Colorado Springs were counting even with masks on, and there were embers and everything," says Donetta Davidson, executive director of the Colorado County Clerks Association. "They didn't leave until they were told to get out."

Colorado's primary, though, was conducted mostly by mail. Getting voters and poll workers to voting stations could be difficult after a disaster.

And, while counties have gotten better about having backup batteries and generators in place to power voting machines, making sure schools, churches and other voting centers remain open in an emergency might be tricky.

"We'll ignore it until it happens, and when it happens, we'll figure it out," says Doug Lewis, executive director of the National Association of Election Officials. "It's not the best way to go about doing something like this."

It might be smarter to have plans in place ahead of time. Overburdened state and local officials understandably have other priorities while coping with a crisis.

"I don't give a damn about Election Day," New Jersey GOP Gov. Chris Christie told reporters Tuesday, during a briefing about Sandy. "It doesn't matter a lick to me at the moment. I've got bigger fish to fry."

But Lewis says election officials have typically been shouted down the moment they bring the subject up for discussion. No politician, it seems, wants to be accused of plotting to manipulate an election by changing its possible time frame.

"Elected officials are reluctant to take on the task of canceling the election and being accused of doing that for partisan purposes," says Ray Holmberg, a Republican state senator in North Dakota.

Early voting might ease some of the strain of a storm-struck Election Day, Davidson suggests. States along Sandy's path, such as Pennsylvania, Connecticut and Massachusetts, allow very little by way of early voting, which would leave them with a much more difficult task if voting were disrupted.

But early voting has become a partisan issue, with Republicans in states such as Ohio and Florida seeking to curb the practice this year.

In terms of tinkering with the final Election Date, Congress clearly has that power. The current system, in which the presidential election is held on the first Tuesday after the first Monday in November, was set by statute. But despite prodding from some academics, Congress hasn't taken up the question of contingency planning if disaster were to strike.

That means, should the time ever come when a storm the size of Sandy occurs on or just before Election Day, officials in the affected areas would be left scrambling at the worst possible time.

"Whether it's man-made or natural," says Lewis, the association director, "we're eventually going to get hit by something on Election Day."