Accessibility links
In Sandy's Wake, Romney Struggles To Regain Attention : It's All Politics A hurricane is no time for campaigning. That naturally gives an advantage to the incumbent, whose job is leading the cleanup and recovery efforts. The media will eventually turn its gaze back to the campaign, but there isn't much time left. 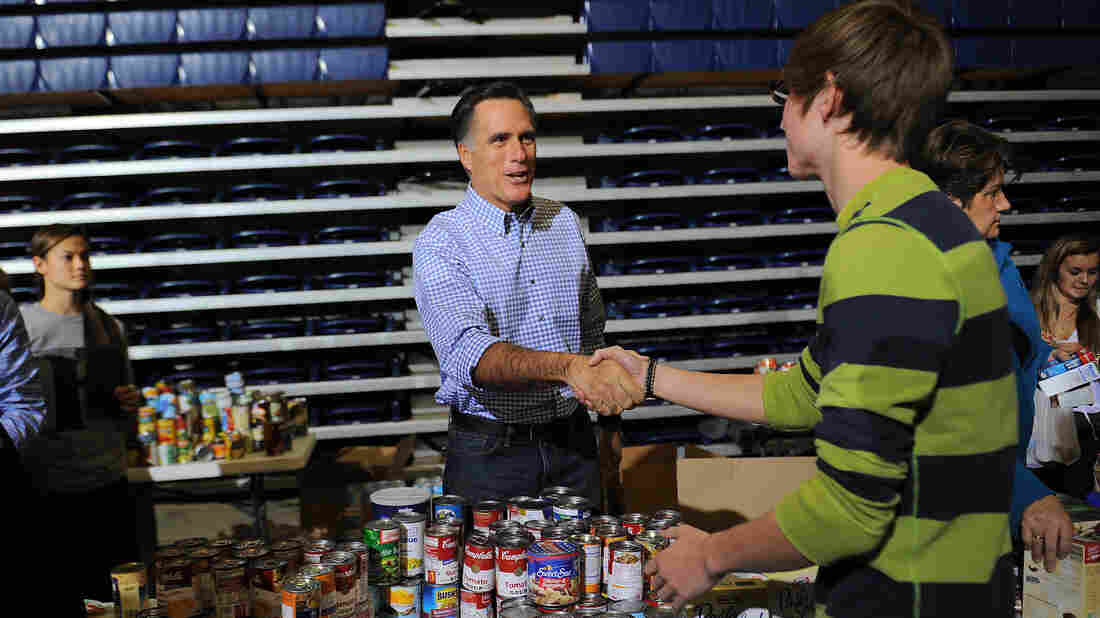 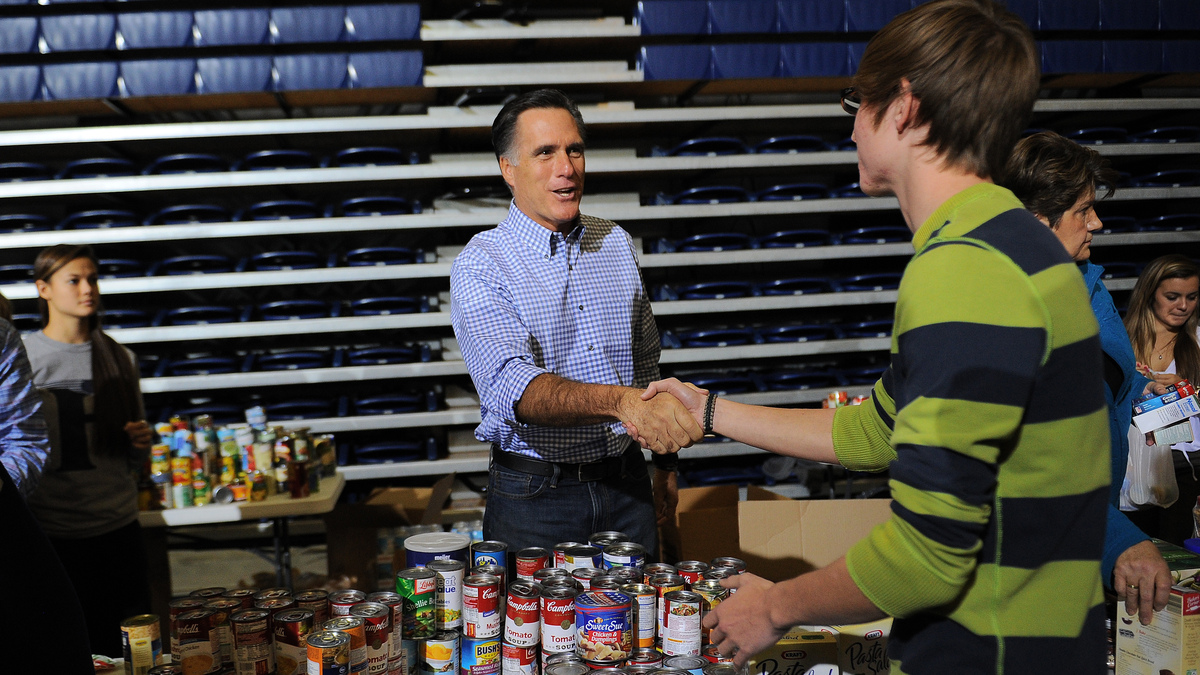 Mitt Romney helps collect and pack donated goods for those affected by Hurricane Sandy, in Kettering, Ohio, on Tuesday.

It's not yet time to change the subject. That might pose a problem for Mitt Romney.

Media coverage of Hurricane Sandy and its aftermath has been intense in recent days, dominating regular news shows and prompting prime-time specials. With just a few days left before the election, the presidential contest has become an afterthought.

"It interrupted the news cycle at a time when there were favorable horse race stories for Mitt," says Tom Rath, a senior adviser to the Romney campaign. "In a campaign, you don't get to design the racetrack; you play the cards you're dealt."

Romney has been sensitive to the ravages caused by the superstorm, collecting donated food in Ohio on Tuesday, calling for donations to the American Red Cross and sending out messages of sympathy.

Still, he has not commanded the same amount of attention that President Obama naturally attracts, given his role heading up the federal government's response to the storm and cleanup efforts.

Obama was touring New Jersey Wednesday with Republican Gov. Chris Christie, who has praised Obama for his handling of the disaster. Romney was campaigning in Florida.

"The attention is all on the president," says William Schneider, a senior fellow at Third Way, a centrist think tank. "It's going to be a little harder for [Romney] to argue that this is a failed presidency, because the president appears to have performed well in this crisis."

Sandy may not pay any direct political dividends for Obama. People expect their leaders to step up at times of crisis. "I don't see a rallying-around-the-president effect," says David Yepsen, director of the Paul Simon Public Policy Institute at Southern Illinois University.

The storm is also unlikely to reshape the electoral map, given that the worst of the destruction occurred in northeastern states that were considered certain to vote for Obama.

But the more days that pass without much media attention paid to the campaign, the harder it will be for Romney to erase Obama's thin polling leads in the battleground states that matter most.

For all the talk over the years about "October surprises" — late-breaking news stories that were thought to sway voters or divert attention from the presidential race — Yepsen says there's never been an event as dominant as Sandy in the closing weeks of any campaign.

"This is a seismic national tragedy," he says. "I don't think there's anything that Romney or the president can do. This is a story in which the narrative has to play out for a few days."

Speaking strictly in terms of media attention, though, all hot stories eventually cool off. With any major news event, there's a point at which most media outlets decide they've reached a saturation point and begin dialing back the coverage — at least outside the affected areas.

Certainly, the presidential election will take precedence in terms of media coverage at some point between now and next Tuesday.

It's hard to know exactly when that might happen, though. Schneider, who is also a public policy professor at George Mason University, suggests that Friday's jobs report might change the subject — particularly if unemployment numbers are looking worse than they were in September.

"Romney has to broaden the issue to the last four years, not the last few days," Schneider says.

Even if Romney isn't able to get much attention for final rallies and appeals — and Obama doesn't turn his attention to campaigning, either — it may not matter much, suggests David Carney, a Republican consultant.

Voters have already heard just about enough of this campaign. The vast majority of Americans seem to have made up their minds early in the process. And, especially with millions having voted early, it's not clear that a strong closing argument from a candidate or a bit more coverage from the media would change the eventual outcome.

"Traditionally, in the last week of the campaign, the messages have all been sent and it's really about turning out your voters," Carney says. "If the 65 trillion TV ads haven't affected you yet, there isn't a week of TV or some new slogan that can move you one way or another."

Rath, the Romney adviser, suggests that voters are sufficiently invested in the presidential race to want to make their choices known, regardless of the shape and coverage of any final campaign sprint, or lack thereof.

"Everybody is overwhelmed and moved by the pictures, which are compelling beyond measure, but at the end of the day, they'll think, 'We've got to vote,' " Rath says. "The American people are going to say, after putting up with this race for 18 months, 'It's time for me to make my decision.' "