Accessibility links
Time May Be Running Out For Missouri's Todd Akin : It's All Politics In the closing days of the campaign, some serious money is coming in behind the controversial GOP Senate nominee, and one recent poll showed his race against Claire McCaskill is a dead heat. But most observers think Akin's already done his campaign too much damage.

Time May Be Running Out For Missouri's Todd Akin

Time May Be Running Out For Missouri's Todd Akin 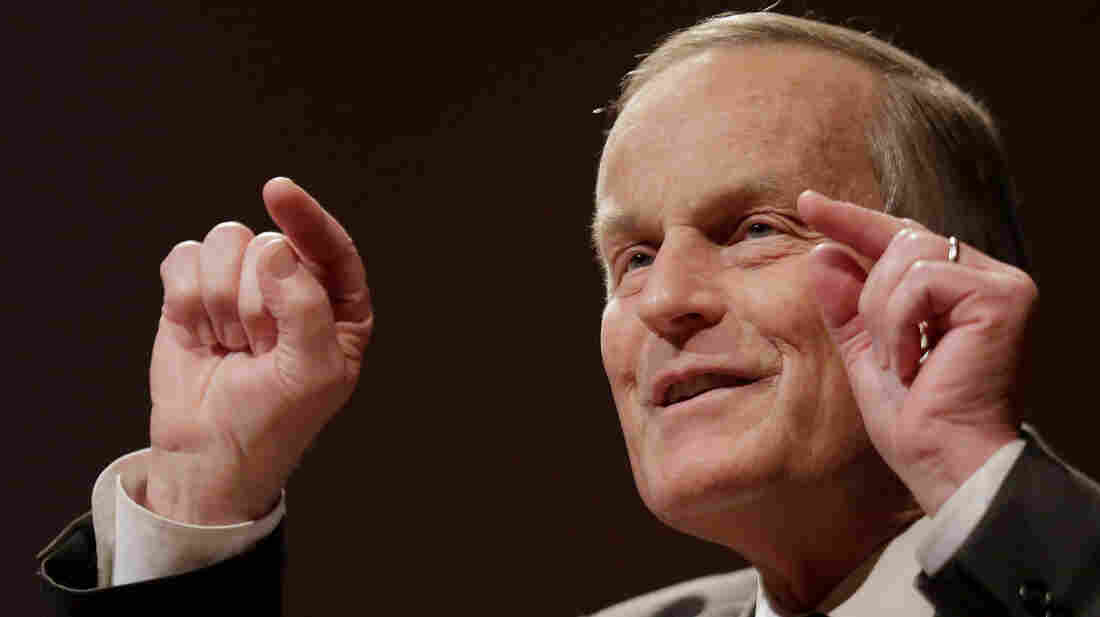 It may be too little, too late for Rep. Todd Akin.

The Republican candidate for Senate from Missouri is seeing an influx of money in the closing days of his campaign. Still, it would come as a surprise to seasoned observers in the state if Democratic Sen. Claire McCaskill went down to defeat.

"Everything I know about politics screams that Claire McCaskill will be re-elected to the U.S. Senate Tuesday," wrote Steve Kraske, a columnist with The Kansas City Star.

McCaskill has vastly outspent Akin, portraying herself as a centrist and him as out of touch. But with control of the Senate potentially on the line, Akin is getting some late help. Now or Never, a superPAC that had backed one of Akin's opponents in the GOP primary, announced a $1 million ad buy on Thursday.

An additional $700,000 has come into state party coffers in support of Akin, with Democrats charging the funds are coming from the National Republican Senatorial Committee.

The NRSC, along with many other national Republicans, had distanced themselves from Akin's candidacy following his remarks in an August interview that in cases of "legitimate rape," the woman's body would avoid becoming pregnant.

That comment brought Akin national derision and the enmity of Republicans from presidential nominee Mitt Romney on down. During the last debate between Akin and McCaskill, one of the panelists actually asked the candidates if an Akin win would cause the state embarrassment in the national media.

Since that comment, Akin has made other remarks that have not played well, saying that McCaskill has not been as "ladylike" as she had been during her 2006 campaign and comparing her to a "dog" playing "fetch" in retrieving higher taxes from Washington.

Akin has lately been more careful in his remarks, but considerable damage has already been done. On Thursday, McCaskill released an ad showing Republicans including Romney and Arizona Sen. John McCain talking about how Akin has no business in the U.S. Senate.

Akin has campaigned in recent days with Republicans such as former House Speaker Newt Gingrich and Oklahoma Sen. Jim Inhofe, but in-state Republican leaders and the rest of the statewide GOP ticket have mostly kept their distance.

"What the 'legitimate rape' comment allowed McCaskill and the media to do was to encourage and stimulate a broader look at the Akin record," says Terry Jones, a University of Missouri-St. Louis political scientist. "He had said things about student lunch and student loans and Social Security, and [the rape comment] encouraged people to take another look at those other issues as well."

For all that, the race remains close. Akin retains considerable support within Missouri's large evangelical communities and McCaskill had been considered the most vulnerable incumbent up for re-election this year before Akin's stumbles.

Akin has attacked McCaskill for her support of President Obama's policies, which are unpopular in the state, notably his health care law and deficit spending. McCaskill has also had to fend off questions about her family finances and failure to pay personal income taxes on an airplane.

"Akin has a core of supporters who will vote for him come hell or high water, and there are some people who won't be voting for him but against McCaskill," says Marvin Overby, a political scientist at the University of Missouri in Columbia.

Maxine Rader, who chairs the GOP in Barton County, which is one of the most Republican jurisdictions in Missouri, says only the handful of local diehard Democrats are supporting McCaskill. County Republicans, she says, believe Akin has been "railroaded."

"She has too much baggage," said Jim Cain, vice president of the Maryland Heights Township Republicans in St. Louis County, referring to McCaskill. "Todd's problems, I believe, are no more significant than hers."

Cain says he thinks a strong finish by Romney — who is expected not only to win Missouri but finish stronger than McCain did four years ago — will carry Akin to victory. Others, however, are skeptical.

Many Missouri Republicans say they'll leave their Senate ballot line blank, or possibly vote for Jonathan Dine, the Libertarian candidate, who has been polling well for a third-party challenger.

"One interesting number to look at after Nov. 6 will be the number of dropoffs from the Romney vote to the Akin vote," says Jones, the UMSL political scientist.

One recent poll showed Akin within two points of McCaskill,, but Jones says that was "probably an outlier." Most public polls show her up by 5 or 6 points.

The late influx of money behind Akin may not be enough to persuade enough voters at this point. Ads bought now will come more dear than time booked a month ago. At any rate, there may not be $1.7 million worth of advertising spots left to buy in the days remaining before the election.

"It may be too late," Overby says.