Accessibility links
Obama's Win Powered By Organization, If Not Ideas : It's All Politics Bloopers and stumbles made the news this presidential campaign, but Barack Obama's re-election was powered by plans begun on the ground four years ago. Here's how he did it. 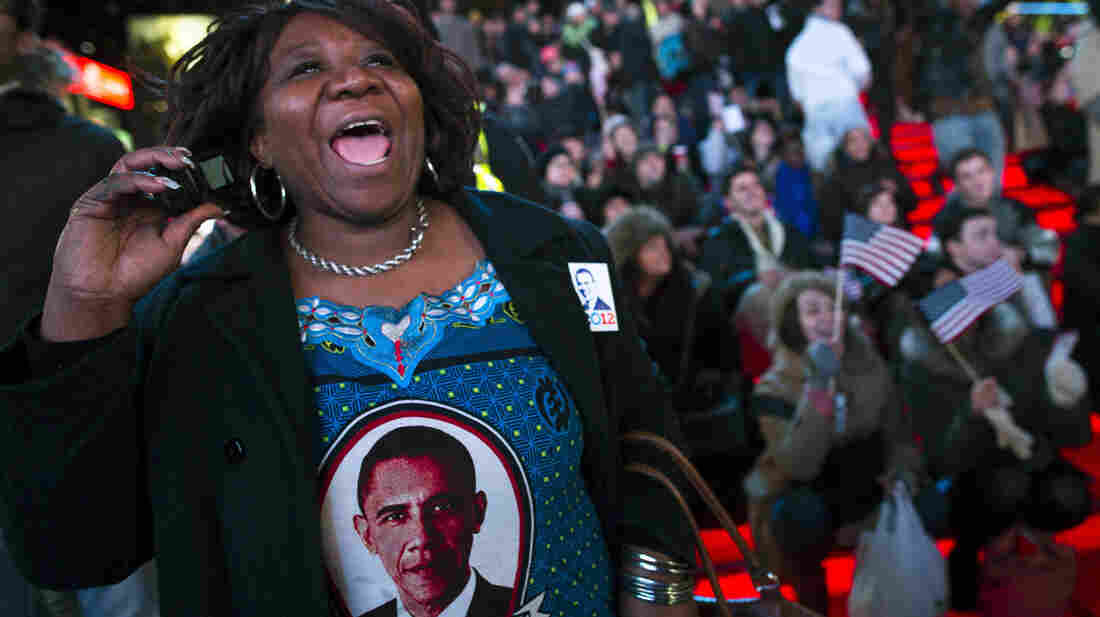 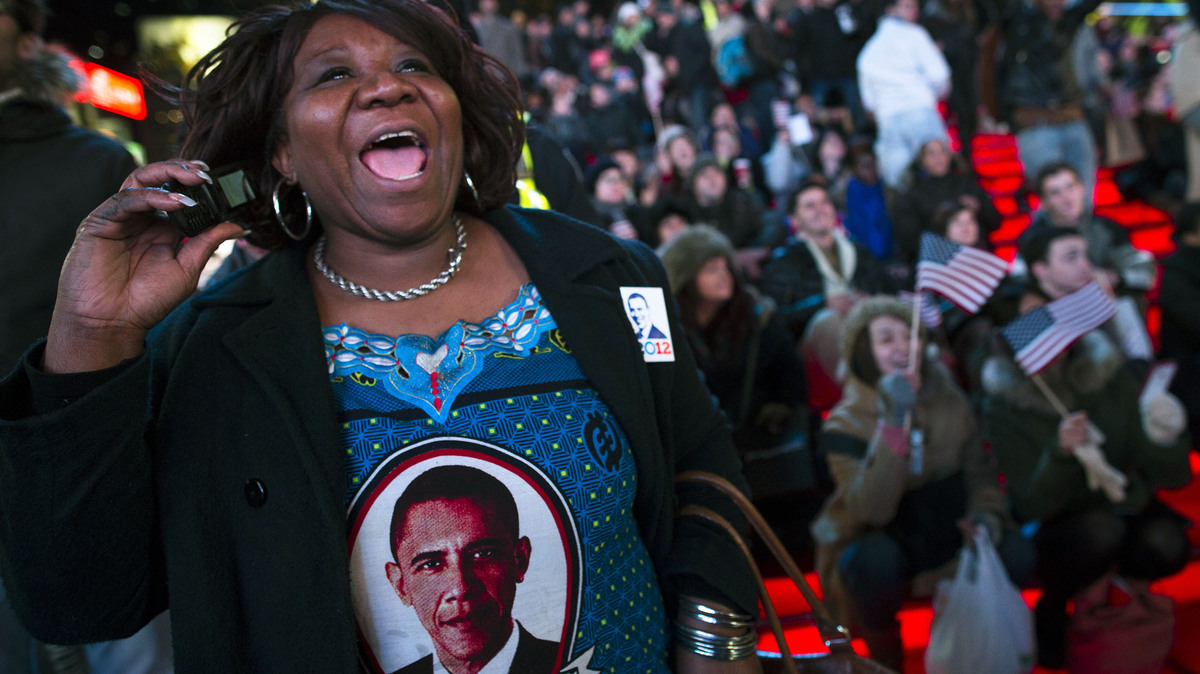 The euphoria of Barack Obama's supporters on election night four years ago was replaced Tuesday by relief, as the incumbent president won a second term over Republican Mitt Romney in an effort powered more by organization than by ideas.

To retain the White House, Obama managed to overcome the handicap of an economy just finding its footing after a devastating recession, and an unemployment rate higher than it's been under any president seeking re-election since Franklin Roosevelt during the Great Depression.

And in swing states that now serve as pickers of our presidents, Obama and his team orchestrated the larger national economic question into a conversation that focused almost solely on the important automobile industry there and his role in its revival.

"The auto workers really feel that he saved their jobs," says Paul Beck, a political scientist at the Ohio State University. Obama won the pivotal state. Results are expected to show him capturing a larger segment — though perhaps not a majority — of the working-class white vote than his national average.

Romney's last-ditch attempt to sour the issue by running an ad that misleadingly, at best, claimed Jeep was moving jobs out of Ohio backfired. Says Beck: "He should have just left the auto issue alone."

Obama's victory in starkly divided America was a study in maniacal, years-long, state-level preparation. It was aided by having an opponent who was fatally hobbled by damage inflicted during a long and harsh GOP primary season, and who seemed unable or unwilling to reach out to voters who weren't in the Republicans' most reliable but fading national demographic: aging, married white people.

With his own fellow Republicans casting Romney as a "vulture capitalist" for his time at Bain Capital, and a "liar" for his evolving positions on issues ranging from abortion and gay rights to health care reform, Obama simply built on what the GOP began.

"Obama essentially framed the election as a choice, not a referendum," says George C. Edwards III, author of Governing by Campaigning. "His message was that, 'You may not like me, but Romney's a risky choice; he's out of touch.' "

"It's easy to overdetermine election results," Edwards says, "but the one thing that was very successful was their definition of Romney in the summer after the Republican primaries."

Sure, Romney displayed other shortcomings. His awkward debate syntax suggested he kept women in "binders." His lackluster nominating convention was overtaken by an aged Hollywood actor addressing an empty chair. A leaked videotape from a fundraiser captured him dismissing "47 percent" of Americans as seeing themselves as "victims" unable to "take personal responsibility and care for their lives."

And his party offered up Tea Party Senate candidates, Todd Akin in Missouri, and Richard Mourdock in Indiana, whose comments on women and rape allowed Democrats to emphasize the divide on women's health and reproductive issues.

But Obama was not always playing from a position of power, despite his incumbency. He turned in a widely panned first debate performance. Saw his "you didn't build that" phrase taken out of context and used to fuel the GOP convention. And a U.S. ambassador and three other Americans were murdered in Libya on Sept. 11.

Former President Bill Clinton's riveting speech at Obama's nominating convention, and his subsequent campaigning, helped define the president's first term in a way Obama had not.

Hurricane Sandy allowed Obama, in the waning days of the campaign, to break from a negative campaign and look presidential overseeing relief efforts with New Jersey's GOP Gov. Chris Christie.

Samuel Popkin, author of The Candidate: What it takes to Win — and Hold — the White House, says he is also convinced that the president's decision to suspend deportations of young people brought to this country illegally as children helped him immeasurably with the growing Latino community. And that his embrace of same-sex marriage brought more important voters, and donors, into the fold.

"You're talking about a re-election, not a first election here," Popkin said. "This is not a wedding night — this is a renewal of vows."

But, perhaps more important than any of the above is that the ceremony could not have been more carefully orchestrated. The planning started back in 2008 when Obama became the nation's first African-American president.

"The Obama campaign realized better than any other campaign that elections aren't about one big thing anymore," says Sasha Issenberg, author of The Victory Lab: The Secret Science of Winning Campaigns. "Part of that is we have much better tools now to isolate the impact of individual interactions between a campaign and voters, and lots of data that allows us to segment the voters themselves."

Issenberg argues that the Obama campaign took those tools, including the application of social science insights and experiments, and, with the gift of four years to perfect its operation, "used them better than any other political enterprise in history."

With a polarized electorate, the campaigns, he says, saw no need to focus on big, persuasive messages or to drive a major change in public opinion. They needed to figure out how to get their electorate out and use their targeting tools to find more voters in perhaps unexpected places.

The Obama campaign had four years to think like an organization, think like a corporation, test strategies, and then invest resources that would find, persuade and motivate voters, says Issenberg, a columnist for Slate.com.

Bottom line, he says, Obama and the Democrats outran Republicans in the increasingly sophisticated game of finding voters, communicating with them, and getting them to the polls.

Issenberg is correct. It wasn't a campaign that involved the selling of big ideas, though size-of-government arguments ostensibly defined the contest.

For Kathleen Hall Jamieson, director of the Annenberg Public Policy Center at the University of Pennsylvania, that was an enormous disappointment.

It was a campaign marked by both sides attempting to capitalize on comments taken out of context, she said, by outright lies by candidates and their surrogates, and by failure to address the realities of an economy that needs fixing.

"They didn't have the courage to tell us what we'd have to do because they believe we're not mature enough," she says. "They're wrong."

Obama may have played it safe because behind the scenes, from Ohio to Iowa, Colorado and back to New Hampshire, the four-year plan was working. Exit polls suggested that nationally, Obama retained the same level of support from demographic groups that fueled his 2008 victory, including blacks, Latinos and young voters.

"It's amazing how little movement there actually was in this campaign," Issenberg says. "Voters pick their teams early, and neither of these candidates saw their paths to victory as challenging that divide, or building a new coalition."

Albeit ones that, when the outside money is counted, will end up costing on the order of $6 billion.