Accessibility links
For Obama, Vindication, But Not A Mandate : It's All Politics Obama has become only the third U.S. president to win re-election by a narrower margin than his first victory. Having won a second term, Obama will seek to set the nation's agenda on issues ranging from taxes to immigration, but he may continue to struggle in selling his ideas to Congress.

Listen
For Obama, Vindication, But Not A Mandate

For Obama, Vindication, But Not A Mandate 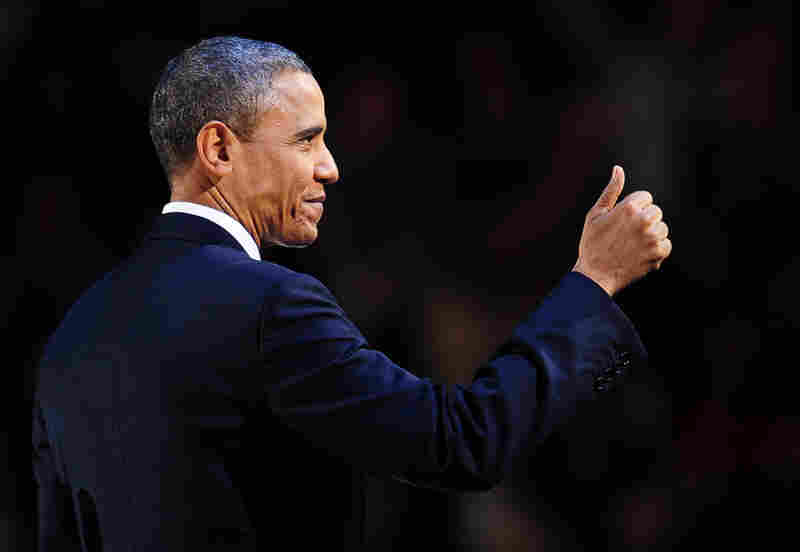 Obama has become only the third U.S. president to win re-election by a narrower margin than his first victory. Having won a second term, Obama will seek to set the nation's agenda on issues ranging from taxes to immigration, but he may continue to struggle in selling his ideas to Congress. Robyn Beck/AFP/Getty Images hide caption 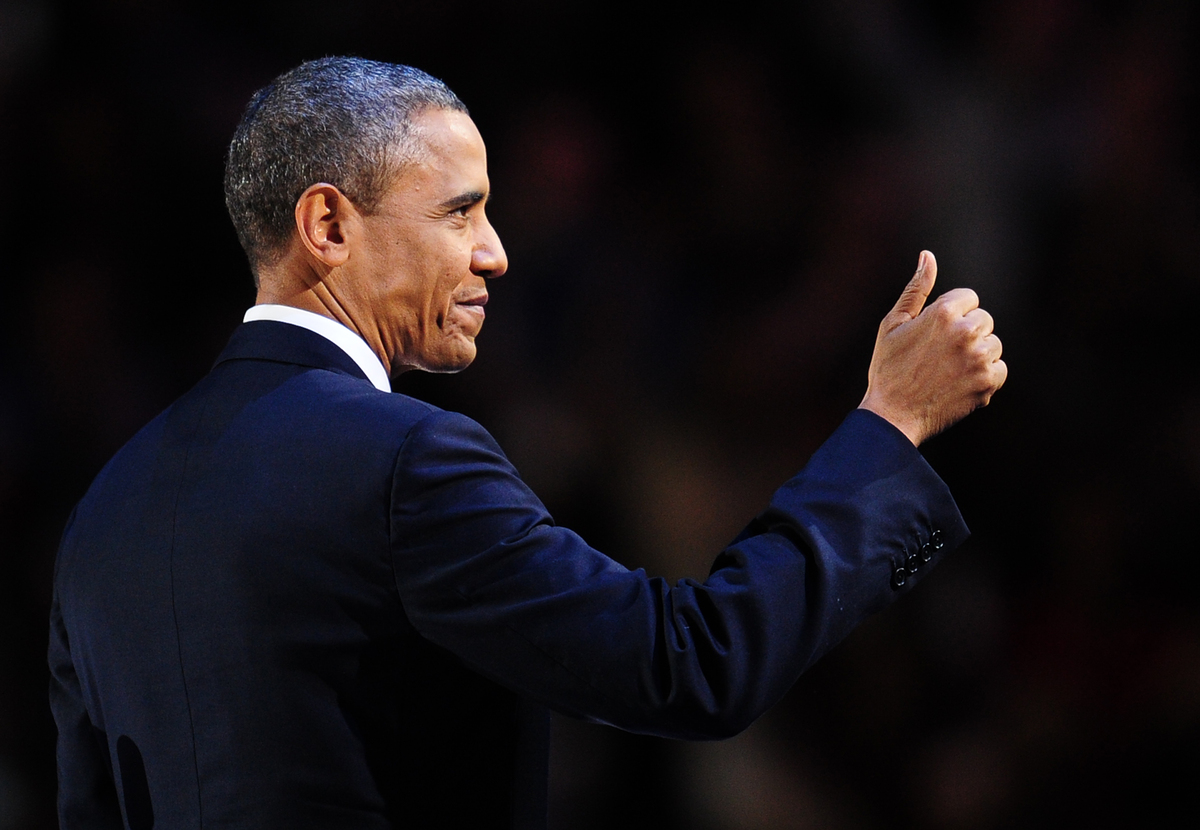 Obama has become only the third U.S. president to win re-election by a narrower margin than his first victory. Having won a second term, Obama will seek to set the nation's agenda on issues ranging from taxes to immigration, but he may continue to struggle in selling his ideas to Congress.

Winning matters. Having earned a second term, President Obama will attempt to build on and expand the agenda from his first, launching new initiatives on tax policy, education and immigration.

But having won the popular vote by a bare majority — and still facing a divided Congress — Obama may find it difficult to gather momentum for his policies.

Despite the close result in the popular vote nationwide, Obama wasted no time claiming vindication for his ideas. In his victory speech early Wednesday in Chicago, he tied his re-election to two centuries of American progress.

His speech was light on policy specifics, but he touched on several priorities including deficit reduction, overhaul of the tax code, immigration and energy independence.

"Tonight, you voted for action, not politics as usual," he said.

Any president gains a boost from re-election. Obama may also be helped by an improving economy. The International Monetary Fund projected last month the U.S. will enjoy the most growth of any rich nation over the next couple of years.

Obama will also hold the whip hand in his initial negotiations with Congress, because of the so-called fiscal cliff. Any deal to avoid painful tax increases and spending cuts will require the president's signature.

"I'm confident that he and the Senate Democrats will continue to insist that part of a deal is the expiration of the Bush tax cuts for the top 2 percent [of earners]," says Jared Bernstein, who has been an economic adviser in the Obama White House. "Everyone agrees on the other 98 percent."

In addition, Bernstein notes, Obama now has the chance to solidify two of the major achievements of his first term — the Affordable Care Act and the Dodd-Frank banking regulations. The president also has made it clear he wants to move major legislation regarding immigration.

"A lot of the time, newly elected and re-elected presidents get more than you think they could," Bernstein says.

But on those issues — as well as many others — Obama cannot count on help from Republicans in Congress. The president's desires will clearly do much to shape the national agenda over the coming years, but his narrow win suggests that there is a lack of consensus for his policies.

"You have to ask the question why it would be any different than the last two years," says Alan Cobb, vice president of Americans for Prosperity, a conservative advocacy group. "It's stalemate for another four years, isn't it?"

Stephen Hess, an expert on the presidency at the Brookings Institution, a center-left think tank, agreed that was possible. "There really are some basic splits between the two parties that each represent half the country."

Obama, in fact, appears, like his predecessor, to have been more of a divider than a uniter. He certainly has not ushered in a post-partisan era of good feelings, as some of his supporters thought possible four years ago.

Despite hopes that his historic stature as the nation's first African-American president would lead to a "post-racial period," Tuesday's election was largely divided along racial and ethnic lines.

A big majority of white voters supported his Republican opponent, Mitt Romney, while Obama won even bigger margins among Hispanic and African-American voters.

Obama's presidency has also done nothing, as yet, to alleviate the nation's partisan divide. Republicans will no longer be seeking to deprive Obama of a second term, but there's no indication that they have warmed to his policy ambitions.

"Obama will have a hard time making his case where it counts, on Capitol Hill," says Jack Pitney, a political scientist at Claremont McKenna College in California.

Just as Obama may feel vindicated by victory, so, too, will House Republicans, Pitney says. They managed to hold on to their majority, surviving campaign attacks from Democrats over Medicare and other issues.

With Democrats in the minority in the House and far short, despite their Senate victories, of holding the 60 votes needed to shut off filibusters, governing the country will be difficult, predicts Rick Perlstein, a liberal journalist and historian.

"Ultimately, it [ends] Barack Obama's grand dream of elevating the discourse and the lion laying down with the lamb," Perlstein says.

Obama is now just the third president in U.S. history to have been re-elected with a smaller share of the vote than during his initial election. The other two were Franklin D. Roosevelt, whose winning percentage ticked down in both 1940 and 1944, and Andrew Jackson, who took less of the popular vote in 1832.

Still, the diminished confidence of voters didn't stop FDR from prosecuting World War II or Jackson paying off the national debt and helping to establish the primacy of the federal government over the states.

"You have a second-term president who doesn't have control of Congress," Dallek says. "He's probably going to do a lot more foreign policy, because that's where they have running room."

Despite the status quo nature of the election results, with partisan control of the White House, Senate and House all remaining unchanged, Obama supporters are hopeful in the wake of his win that he can indeed make good on his campaign slogan and move the country "forward."

The line of people waiting to vote Tuesday morning at Foundry Methodist United Church in Washington, D.C., stretched for nearly a block outside along P Street. Many said they wanted to show their support for Obama, despite near-freezing temperatures and the certainty he would take roughly 90 percent of the District of Columbia vote.

Several people said they wanted to give a boost to his national popular vote total. "I hope he not only wins in the Electoral College but wins a popular vote mandate," said Sara Schapiro, who works at an education policy think tank.

In his victory speech, Obama offered a largely communitarian vision of shared values and destinies of individuals in the country.

Still, he recognized that the election will not put controversy and "sometimes fierce" disagreement to rest. "That won't change after tonight," he said, "and it shouldn't."