Accessibility links
Deja Vu All Over Again: Obama And Boehner Clash On Fiscal Cliff And Taxes : It's All Politics The words from President Obama and House Speaker John Boehner on Friday over taxes and the fiscal cliff could be properly viewed as the two men staking out opening positions in coming negotiations. They also could be seen as addressing the two very different constituencies the men must answer to.

Deja Vu All Over Again: Obama And Boehner Clash On Fiscal Cliff And Taxes

Deja Vu All Over Again: Obama And Boehner Clash On Fiscal Cliff And Taxes 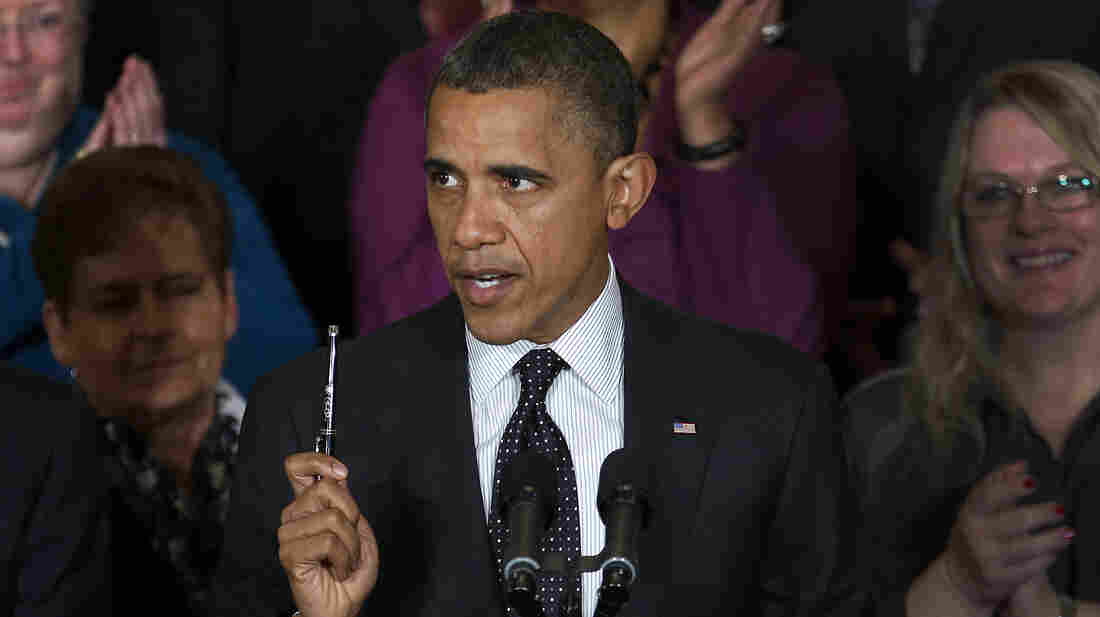 President Obama speaks about the economy and the deficit Friday in the East Room of the White House. Carolyn Kaster/AP hide caption 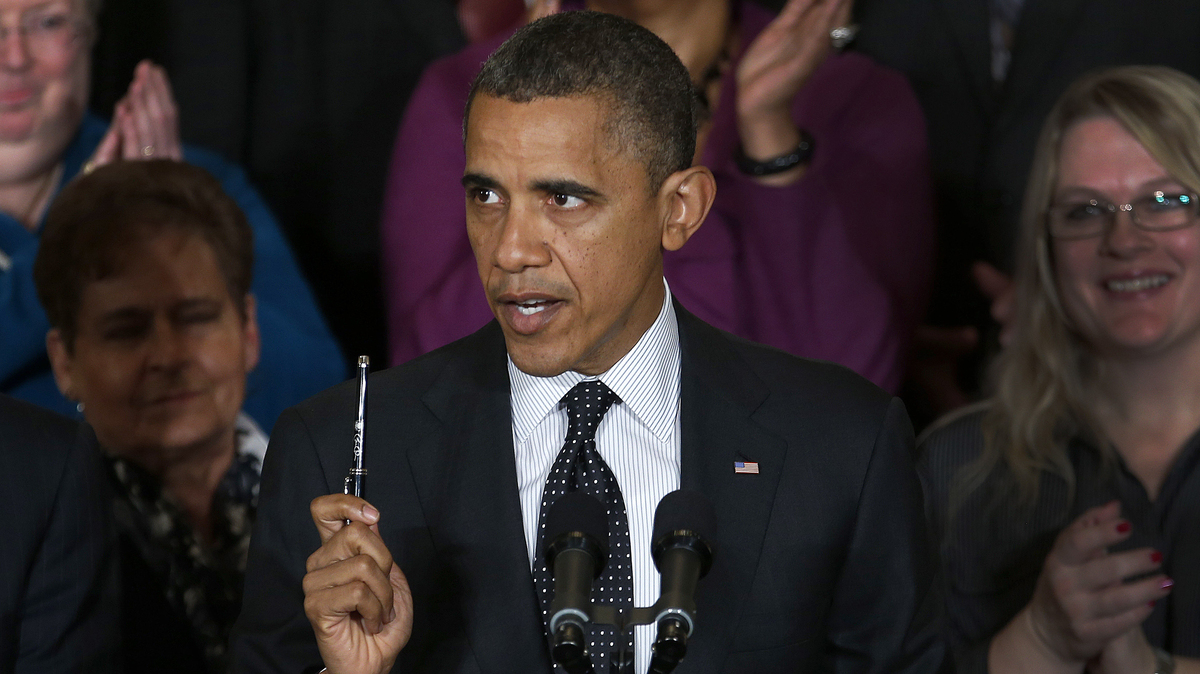 President Obama speaks about the economy and the deficit Friday in the East Room of the White House.

If you fell asleep Rip Van Winkle-like earlier in the year only to wake up Friday, you might be forgiven for thinking no time had passed.

Because on Friday, President Obama called for higher taxes on the wealthy to be part of any agreement to avoid the fiscal cliff, while House Speaker John Boehner strongly indicated that proposal was a non-starter with House Republicans.

But, of course, we just had an election in which the president won a second term and, through that, some political capital. Exactly how much remains to be seen.

So with the president's big — and, to many Republicans, unexpected — win Tuesday in the Electoral College behind him, Obama made an offer he's counting on Boehner finding hard to refuse in the coming, tense negotiations over a deficit-cutting deal.

The president proposed that Republicans should immediately agree to extend the middle-class tax cuts scheduled to expire at the end of the year while discussions continue on a more comprehensive agreement to avert the spending cuts and tax increases due to take effect in the new year, the so-called fiscal cliff, which experts warn could return the U.S. economy to recession.

At a White House event that featured a diverse group of people standing on risers behind him, which gave the appearance that for the White House, Tuesday was just a pause in the presidential campaign, Obama said:

"So let's not wait. Even as we're negotiating a broader deficit reduction package, let's extend the middle-class tax cuts right now. Let's do that right now.

"That one step, that one step would give millions of families, 98 percent of Americans and 97 percent of small businesses, the certainty that they need going into the new year. It would immediately take a huge chunk of the economic uncertainty off the table. And that will lead to new jobs and faster growth. Business will know that consumers, they're not going to see a big tax increase. They'll know that most small businesses won't see this increase. And so a lot of uncertainty that you're reading about, that will be removed."

Not only did Obama have Tuesday's Electoral College and popular vote on his side, he also had exit polling. Sixty percent of voters surveyed said they thought taxes should be increased on either all taxpayers or those with more than $250,000 in annual income.

Even a significant minority of voters who backed Republican Mitt Romney — 29 percent — agreed that taxes should be raised on those with income over $250,000.

Because Romney made opposition to raising tax rates on the superwealthy part of his campaign, Obama seemed to interpret his defeat of his GOP challenger as a referendum on this point:

"And I just want to point out, this was a central question during the election. It was debated over and over again. And on Tuesday night, we found out that the majority of Americans agree with my approach. And that includes Democrats, independents and a lot of Republicans across the country, as well as independent economists and budget experts."

Obama was clearly trying to pressure Republicans by putting on the table an extension of the middle-class tax cuts that were part of tax-reduction packages enacted by his predecessor, George W. Bush.

By calling for an immediate extension of the middle-class tax cuts, Obama was attempting to paint congressional Republicans into a corner. While he didn't say it, the implication was clear: If taxes go up next year on millions of middle-income earners, Obama will blame Republican resistance to raising tax rates on the wealthy as the cause. 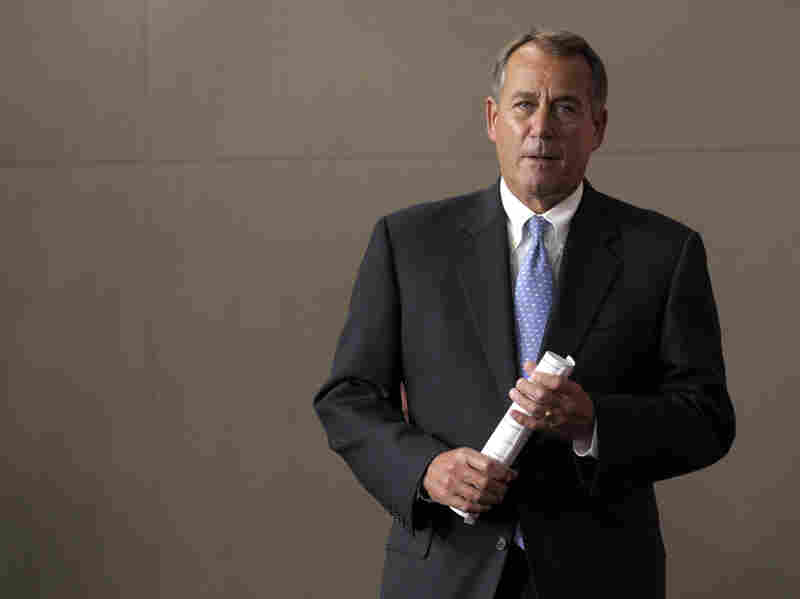 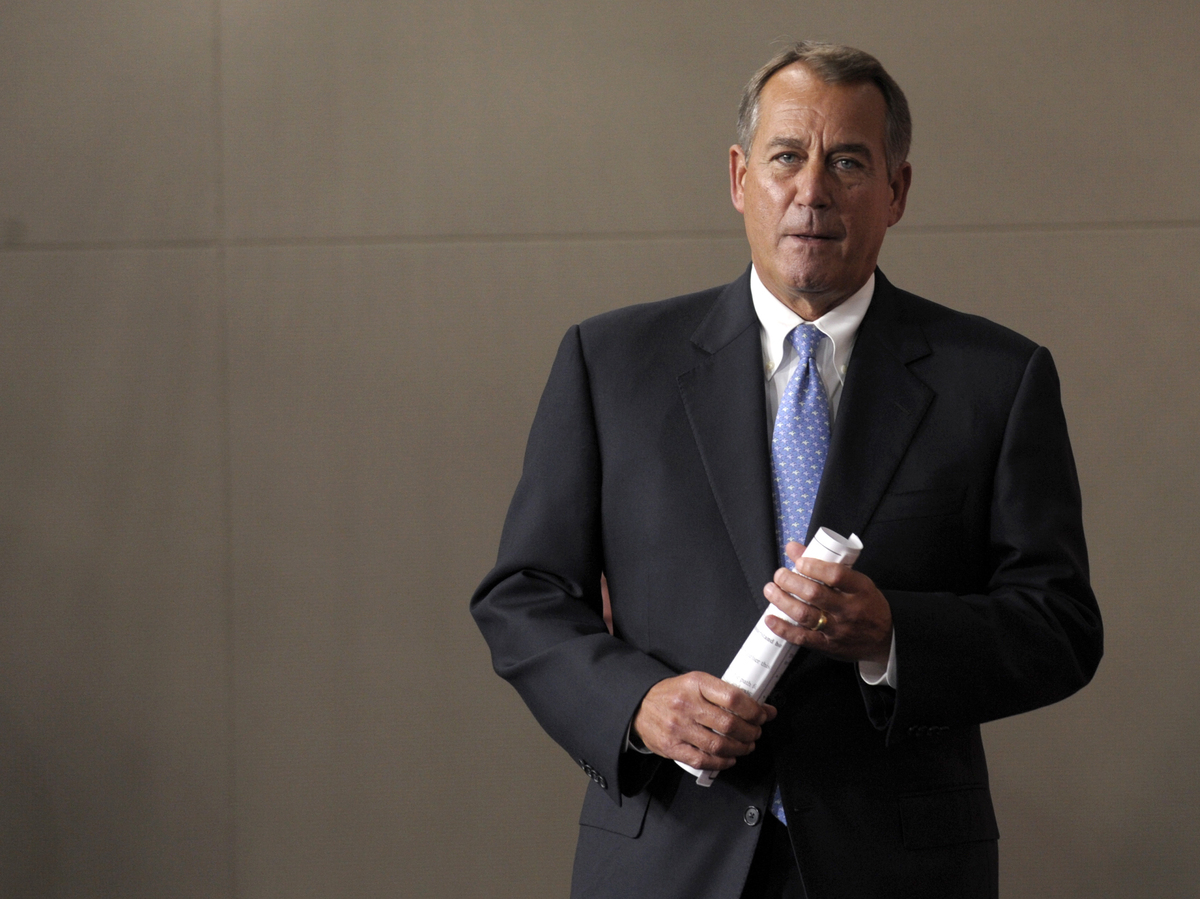 The president's proposal was reminiscent of earlier tactical moves in his presidency. When Bush-era tax cuts were due to expire at the end of 2010, for instance, the president linked an extension of those cuts to a renewal of long-term unemployment insurance.

Republicans initially balked, but a deal was reached as the deadline approached that extended the jobless benefits. The tax cuts were extended as well for two years, including cuts for the wealthiest taxpayers.

If Republican leaders on Capitol Hill were feeling any pressure from the president's gambit, it wasn't readily apparent.

On election night, Boehner offered this interpretation of the election returns while speaking at the Republican National Committee:

"The American people want solutions — and tonight, they've responded by renewing our House Republican majority. With this vote, the American people have also made clear that there is no mandate for raising tax rates."

On Friday, after the president cited legislation he supports and that the Democratic-controlled Senate passed that would raise rates on those with the highest income, Boehner said:

While the words from Obama and Boehner on Friday could be properly viewed as the two men staking out opening positions in the coming negotiations over solving the fiscal cliff, they also could be seen as addressing the two very different constituencies the men must answer to.

Obama won re-election largely because of support from a coalition of more progressive supporters in urban and suburban areas, many of them minorities and women, who came out for him on Tuesday and during early voting in the weeks before.

It's that disconnect in their constituencies that helps explain much of the difference in the opening salvos of Obama and Boehner. They'll have a chance to see if there's common ground starting next Friday, when Obama has asked Boehner and other congressional leaders to join him at the White House for talks.