Accessibility links
Meet The New GOP, Same As The Old GOP? : It's All Politics There has been no dearth of post-election Republican self-flagellation. But the party is still sorting out solutions, wrangling over whether its problems lie in its positions on issues ranging from immigration to women's reproductive health, or simply in its sales job with the voting public.

Meet The New GOP, Same As The Old GOP?

Meet The New GOP, Same As The Old GOP? 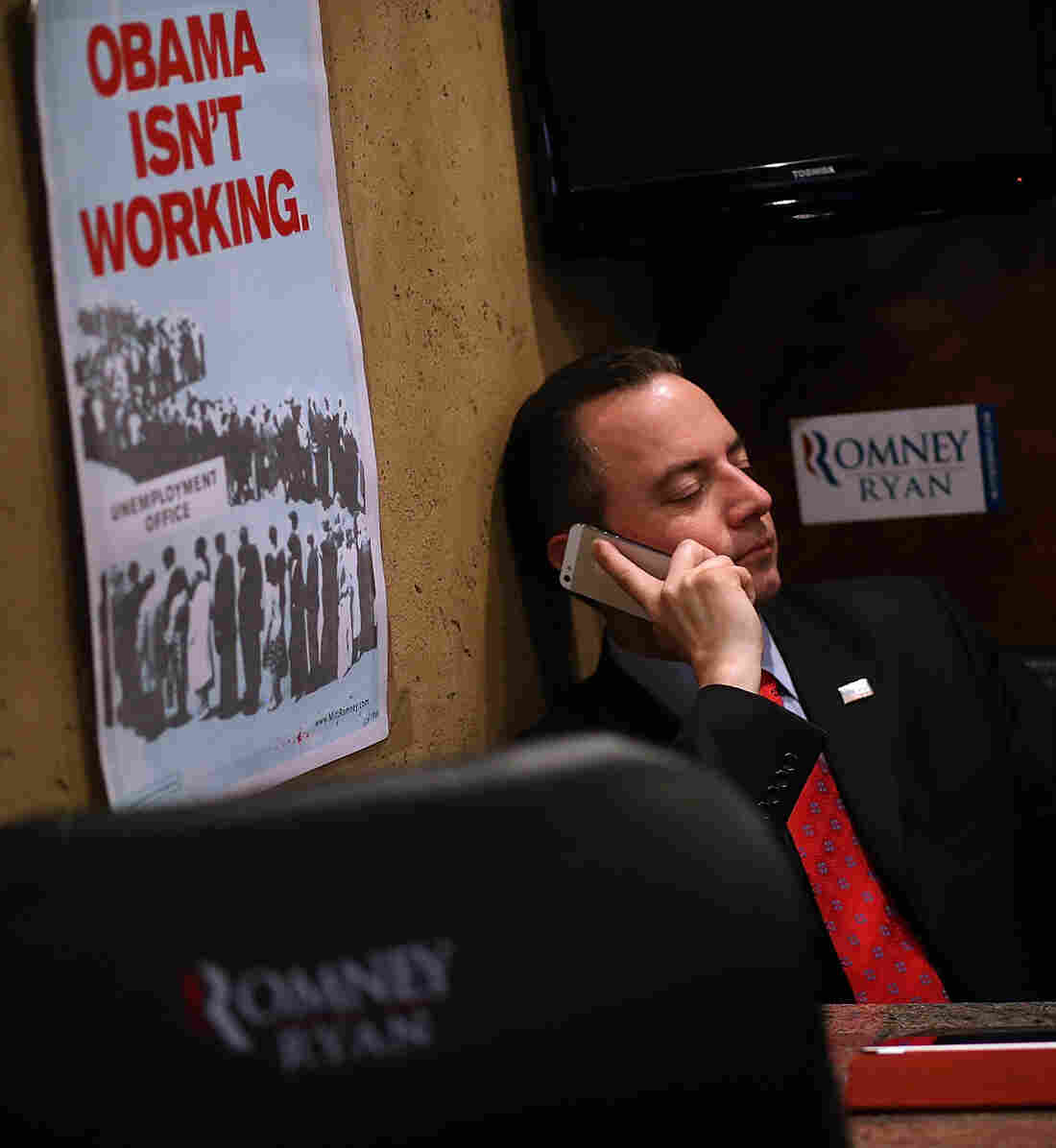 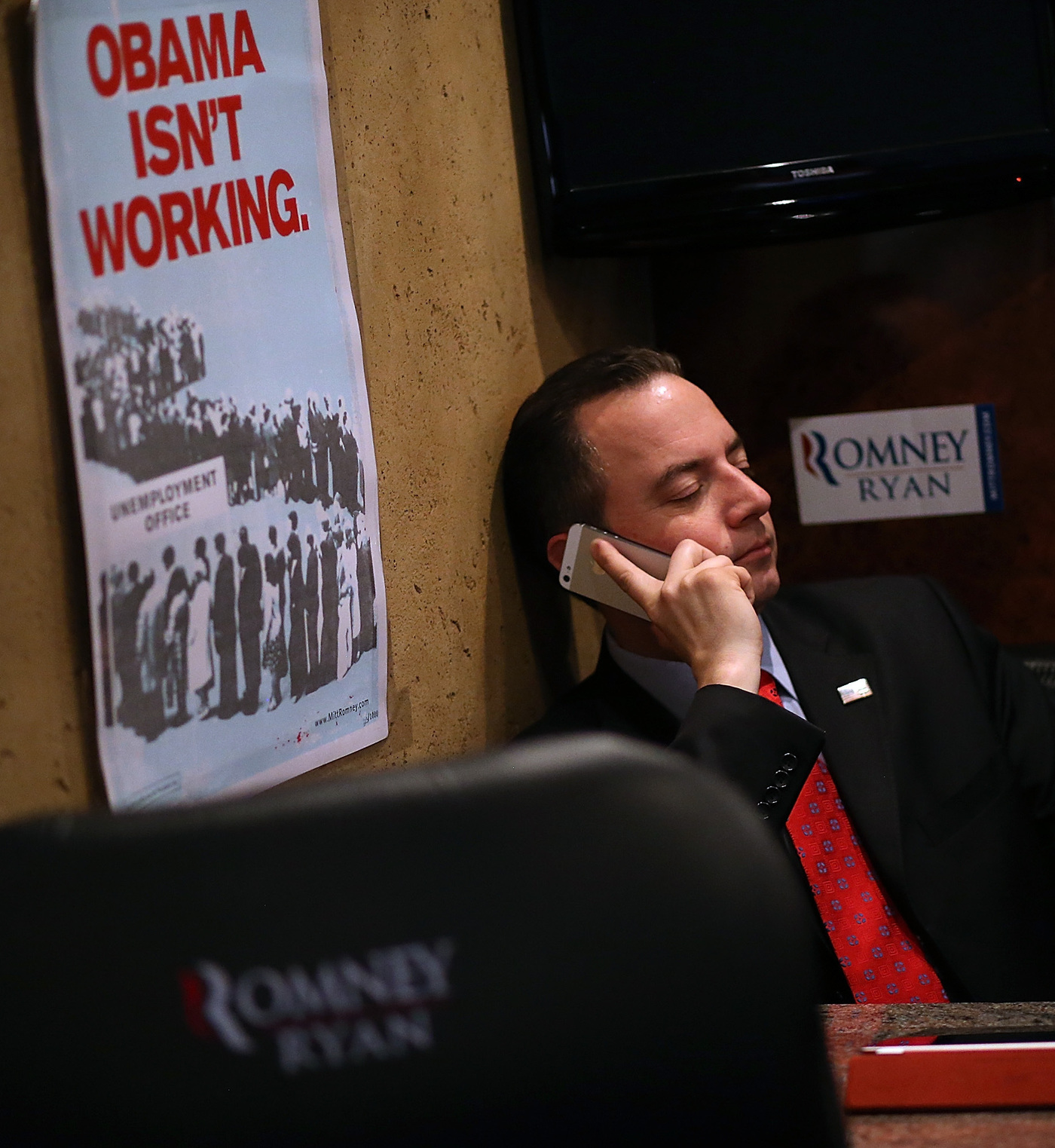 Republican National Committee Chairman Reince Priebus rides the Mitt Romney campaign bus days before the presidential election. Despite Romney's loss and other GOP failures, Priebus, who helped the party raise huge sums of money in 2012, may seek a second term.

There has been no dearth of post-election Republican self-flagellation.

Louisiana Gov. Bobby Jindal, on the eve of heading out to a meeting of Republican governors in Las Vegas, warned the GOP to "stop being the stupid party." At the gathering Wednesday night, he leveled more harsh criticism at party presidential candidate Mitt Romney.

Others, including analyst Charlie Cook in a post-election briefing, have suggested that the party's dismal performance with Hispanic and younger voters suggests it may be well-served by replacing Republican National Committee Chairman Reince Priebus with a higher-profile leader in the mode of Democratic chairman Bob Strauss in the 1970s, or GOP chairman Haley Barbour in the 1990s.

Shirley, in an interview Wednesday, agreed: "The Republican Party suffered reversals across the board. The party needs a new approach."

But the party is still sorting out solutions, wrangling over whether its problems lie in its positions on issues ranging from immigration to women's reproductive health, or simply in its sales job with the voting public.

In the meantime, Priebus, the Wisconsin lawyer elected party chairman in early 2011 when he successfully challenged Michael Steele, will likely seek a second term in January — and is being urged to do so by influential party members.

Priebus is expected to announce his intentions soon.

"He inherited a total, unmitigated disaster from Michael Steele," the former Maryland lieutenant governor who ran the RNC for two years, says Jack Oliver, who was national finance vice chairman for the 2004 George W. Bush-Dick Cheney campaign, was finance director for Bush's 2000 campaign, and served as deputy chairman of the RNC during the 2002 midterm elections.

"He straightened the ship," says Oliver, a senior adviser for Bryan Cave and Barclays Capital.

Oliver and others, including Bill Greener, a former communications director and political operations staffer at the RNC, say people within the party recognize the skill Priebus brought to putting the committee on competitive financial footing after inheriting $20 million in debt, and his tactical skills will be needed to improve the party's get-out-the-vote effort, which was swamped by President Obama's operation.

"I think Reince did a very, very strong job as chairman," says Greener, a strategist who advises politicians and corporations.

"I don't believe in saying, 'Let's hang them,' " he said of Priebus, as well as GOP House Speaker John Boehner and Senate Minority Leader Mitch McConnell. "I don't think you can negate the multitude of good things those three individuals have done."

"In terms of where the party goes next, we need to be smart, we need to look into all sorts of things, and we need to not overreact," Greener says.

Steele, the party's first African-American chairman, who was criticized for the debt he left Priebus, says his his own legacy included something more important than raising money: "winning." The party during his tenure delivered unto Democrats a 2010 midterm "shellacking," to use Obama's word. Republicans won control of the House, picking up 63 seats, along with five Senate seats.

One theme that has emerged from within the GOP since the election is the argument that the party was hobbled more by its language and organization than by its core conservative beliefs.

At the Republican meeting of its 30 governors, the message from former Mississippi Gov. Barbour was that everything is pretty darn fine, and the party must avoid becoming something akin to Democratic "lite."

But others, like Shirley, see a need for much more fundamental reconsiderations, given what he sees as the historic nature of Obama's re-election, and the GOP's failure to capitalize on a prime opportunity to make gains in the Senate.

"Sometimes it takes a second election to understand the first election," he said. "We didn't know the meaning of the 2008 election until now."

Shirley's suggestion for his party? Embrace federalism, and build up the state Republican parties by shifting power from Washington-based "consultants, media and lobbyists" to the state organizations.

"Insulting Democratic voters is not a way to get them to look at the Republican Party," he said.

It wasn't demographics that caused the GOP to lose, Shirley argues, but the underlying problem with the "party of the past" message it was projecting — beginning with Romney's slogan, "Take Back America."

Greener says that if Republicans continue to look and sound like they did in this past election, they are destined to become a modern-day Whig Party, weak and factionalized.

"The important lesson in this for me is that Republicans have believed for a long time that the things we want are best for all Americans, that we're not practitioners of identity politics," he says. "The problem with that is that there's now an abundance of evidence that suggests no matter what we believe, or how well-intentioned, the reality is that nonwhites don't see themselves as being part of what Republicans care about."

But that's part of it, and implementing immigration reform, Oliver says, is "going to require pushing back" on some of the more conservative elements of the GOP.

It can, he says, "be a beginning of a conversation with a community that shares our values."

Many have referred to the election as one of "status quo" because the essential balance of power remained the same. A Democrat in the White House, a Senate controlled by Democrats and a House led by Republicans. And, perhaps, Priebus still chairing a flailing party.

That, however, understates what happened on Nov. 6.

Greener says the big challenges faced by the party have now been "verified and corroborated by the data."

The shift from the party of omission to one of inclusion looms larger than any mechanical fix Priebus and other tacticians have to tackle.

"That's a partywide issue," Oliver says. "It takes Bobby Jindal and other great governors across the country. It takes [Florida's] Marco Rubio and [Ohio's] Rob Portman and others in the Senate. It takes Speaker Boehner driving his caucus to see the demographics are changing."

"We don't have to change our party, but we have to move forward and be inclusive," he says.

But that is a type of change and would make Republicans fundamentally different from the party that just lost the White House, and lost ground in the Senate — a party struggling to define conservatism going forward and with a restive base bitterly divided on just how that should play out.