Accessibility links
Obama Says He Has One Mandate: To Help The Middle Class : It's All Politics The newly re-elected president indicated that he, not congressional Republicans, reflected more of the popular will, with his call for higher taxes on the wealthy as part of any agreement to avert the fiscal cliff.

Obama Says He Has One Mandate: To Help The Middle Class

Obama Says He Has One Mandate: To Help The Middle Class 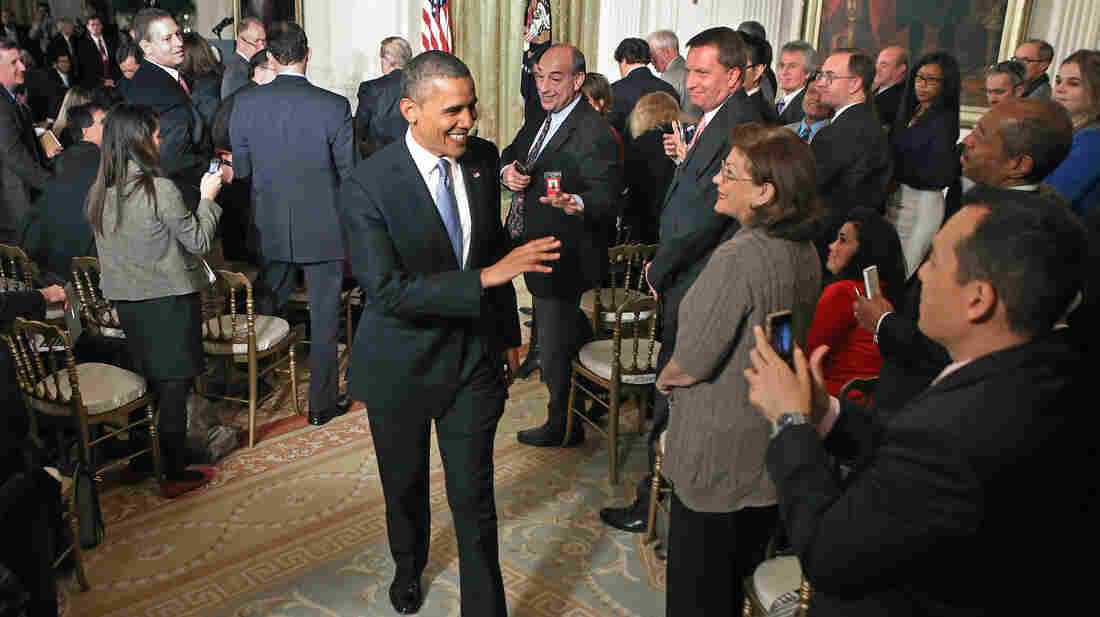 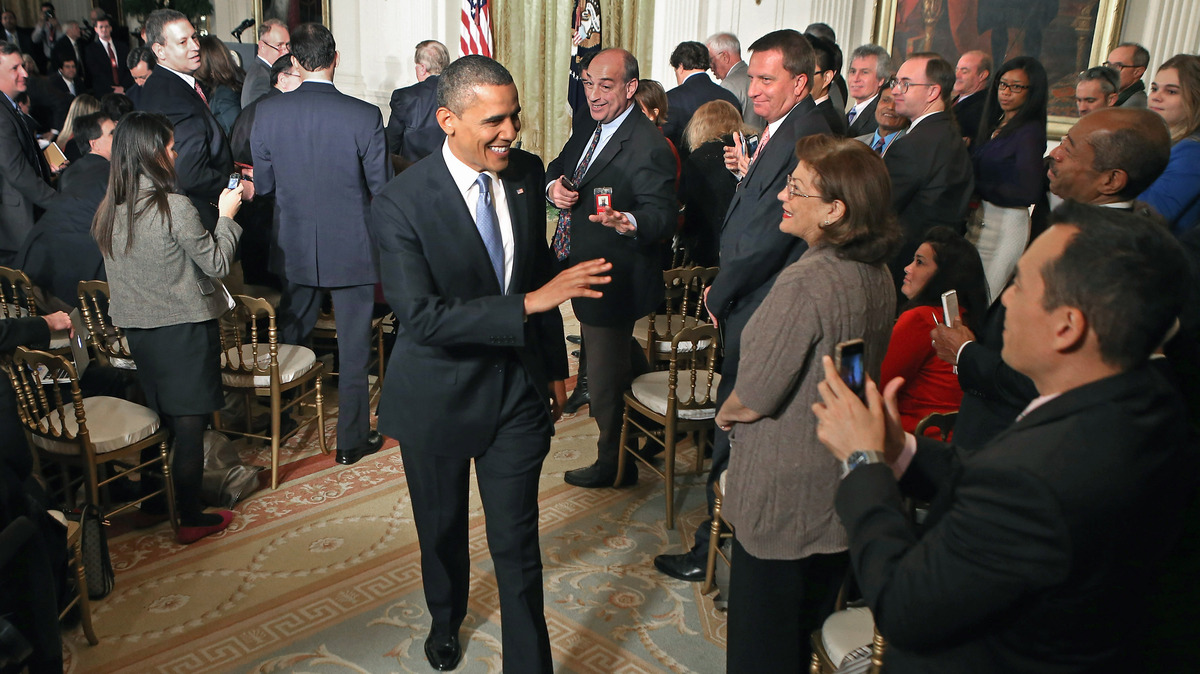 A president just re-elected has arguably the most political capital he's likely to have during his entire second term.

And President Obama clearly has some capital, though he didn't overtly refer to it or vow to "spend it," as his predecessor George W. Bush famously said upon his 2004 re-election.

But in his first post-election news conference, while Obama didn't openly talk about spending his political capital, it was fairly obvious he plans to do just that. Whether the issue was his proposal for avoiding the so-called fiscal cliff or reforming the nation's immigration laws, the president sounded like a man confident he would have the majority of voters with him.

Among the unanswerable questions for the moment, however, is just how much political capital the president gained in his re-election, and when would it run out?

That sense that the president had the political winds at his back seemed to extend to an area where the public mood is more ambiguous — the attack on the American Consulate in Benghazi, Libya, that left four Americans dead. In one of his feistiest moments of the news conference, Obama rebuked congressional critics of U.N. Ambassador Susan Rice, which include his 2008 rival for the White House, Sen. John McCain, R-Ariz.

One area where the president certainly appeared to have more leverage after the election was in fiscal negotiations with congressional Republicans to avert the significant tax cuts and spending increases that would begin to take effect early next year if no accord is reached.

As he has for the better part of his presidency, Obama called for any agreement to include higher tax rates on the wealthiest Americans, not just spending cuts.

General elections have consequences, and one of them is that they come with exit polls. And those polls show some 60 percent of those surveyed agreeing with the president that taxes should be raised on at least the highest income earners.

And as the president noted, not all of those people are Democrats. In response to a reporter's question, he said:

"So we've got a clear majority of the American people who recognize if we're going to be serious about deficit reduction, we've got to do it in a balanced way."

But even with a public that very much wants to see an agreement from Washington policymakers, Obama was careful not to suggest that it had to be his way or else. Obama wanted it known that he was keeping an open mind, to a point:

"I am open to new ideas. If the Republican counterparts or some Democrats have a great idea for us to raise revenue, maintain progressivity, make sure the middle class isn't getting hit, reduces our deficit, encourages growth, I'm not going to just slam the door in their face."

That is, unless congressional Republicans make claims that supply-side economics could solve the problem. A president obviously emboldened by last Tuesday's results said he wouldn't stand for that.

That is a point of looming conflict for Obama and Republican negotiators. In his public utterances since Election Day, House Speaker John Boehner has not used the words "supply-side economics." But his remarks suggest that the idea that lower taxes inevitably lead to faster economic growth and eventually higher tax receipts appears to still be very much a part of his thinking.

In any event, in response to a reporter's question about whether he had a mandate coming out of the election, the president didn't reject the idea. But he framed it in the same way he had during the campaign, that he, not the Republicans, was the true champion of the middle class:

"With respect to the issue of mandate, I've got one mandate. I've got a mandate to help middle-class families and families that are working hard to try to get into the middle class. That's my mandate."

That could be a powerful and oft-repeated line in the fiscal-cliff negotiations to come, especially as the president continues to allege that by resisting higher tax rates for the wealthy and pushing for deep social spending cuts, Republicans were choosing to hurt the middle class.

While it's difficult to see how Obama and Capitol Hill Republicans reconcile the president's wish that the rich pay taxes at a higher rate and the GOP's determination to maintain current tax rates or even cut them, there could be more agreement between the sides on immigration reform.

Republicans can read the exit polls as well as Obama can, and those polls indicated that 65 percent of all voters want reforms that would give illegal immigrants a path to citizenship.

That Obama won 71 percent support from the nation's fastest growing minority group — Latinos — who were 10 percent of the Election Day turnout, higher than ever before, provided Republicans with a wake-up call that has numerous GOP lawmakers calling for reform and a less hard-line immigration stance from their party.

If immigration was an issue on which Obama was likely to find common ground with Republicans, the potential appeared high for a clash between Obama and Republican lawmakers over the tragedy in Libya.

McCain and Sen. Lindsey Graham of South Carolina have gone on record with their opposition to the possibility that Obama would name Rice to succeed Hillary Clinton as secretary of state, when Clinton formally decides to step down.

Their objections to Rice, McCain and Graham have said, are based on her initial public statements that the Sept. 11, 2012, violence that killed U.S. Ambassador to Libya Christopher Stevens and three other Americans was a reaction to an anti-Muslim video. According to administration officials and Obama on Wednesday, Rice was just relating the initial information she was provided through U.S. intelligence channels.

That was in part because Obama used that attack to show the kind of fire he lacked during his infamous first-debate performance.

Using language similar to what he employed during the second debate, Obama on Wednesday said that for Republicans to "besmirch [Rice's] reputation is outrageous." And then he put Senate Republicans on notice that if he eventually decides Rice is the best person for the State Department post, he would very well nominate her.

Whether Obama will ultimately want to wage a nomination battle with Senate Republicans over Rice, and whether Republicans would hold together against her, remains to be seen.

But while foreign policy didn't prove to be a decisive factor in the election, it appeared Obama could at least contemplate using some of his newly gained and hard-won political capital in a looming foreign policy fight.