Accessibility links
In Fiscal Cliff Talks, Higher Taxes Vs. Closing Loopholes : It's All Politics The White House and Congress continue to work on a deal that avoids the fiscal cliff and cuts deficits in the long run. President Obama wants to raise tax rates for the wealthy. Republicans want to raise revenue by closing loopholes and limiting deductions for high-income people. But could that raise enough money? 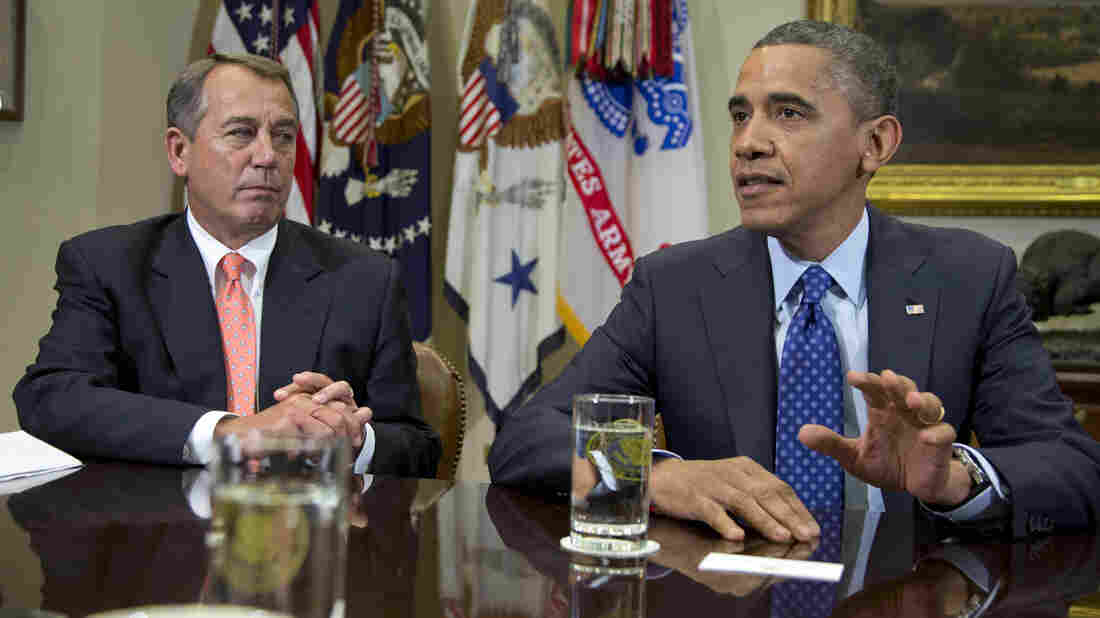 President Obama, accompanied by House Speaker John Boehner of Ohio, speaks to reporters at the White House on Friday during a meeting to discuss the fiscal cliff. Carolyn Kaster/AP hide caption 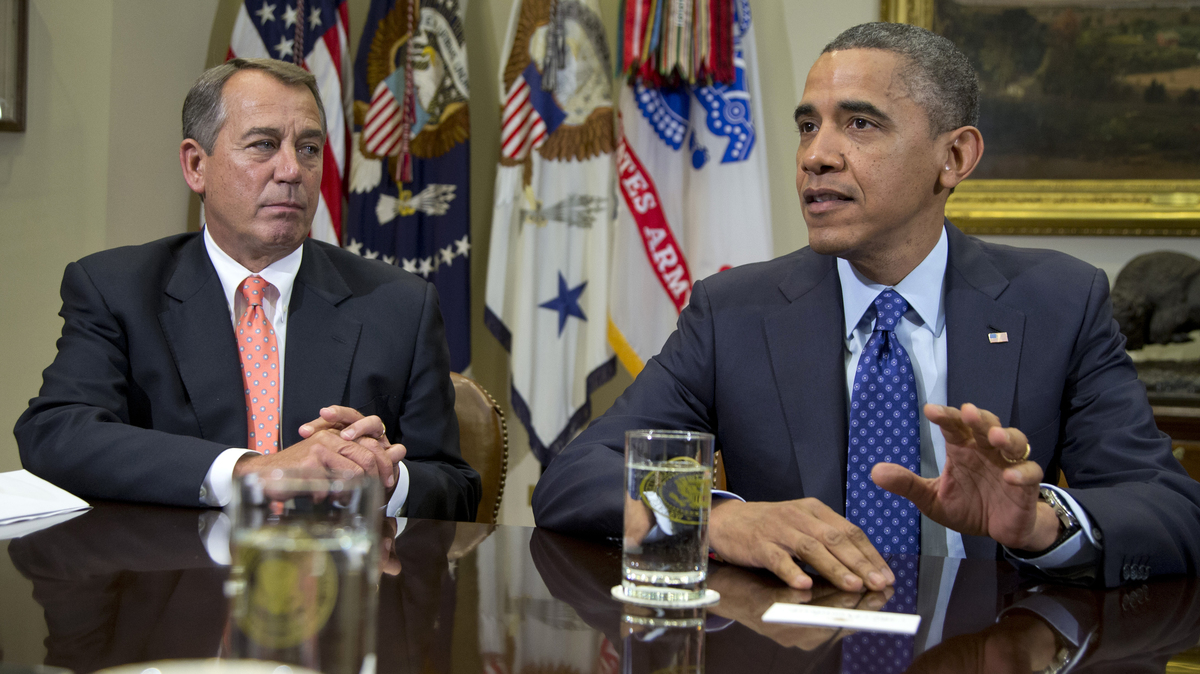 President Obama, accompanied by House Speaker John Boehner of Ohio, speaks to reporters at the White House on Friday during a meeting to discuss the fiscal cliff.

The White House and Congress continue to work on a deal that avoids the fiscal cliff and cuts deficits in the long run. One of the biggest hurdles is President Obama's proposal to raise tax rates for the wealthy.

Republicans think a better course would be to raise revenue by closing loopholes and limiting deductions for high-income people. The question is, could that method raise enough money.

The argument over how to get additional revenue to close the budget gap was carried on in dueling post-election news conferences last week.

"There are a lot of special-interest loopholes in the tax code, both corporate and personal," said House Speaker John Boehner, R-Ohio. "There are all kinds of deductions, some of which make sense, others don't."

"It's very difficult to see how you make up that trillion dollars — if we're serious about deficit reduction — just by closing loopholes and deductions," the president said. "You know, the math tends not to work."

That's a tall order. One approach that was suggested by Mitt Romney during the campaign, and endorsed by the Wall Street Journal's editorial page last week, is to cap tax deductions at a specific dollar level. The nonpartisan Tax Policy Center has analyzed the idea. Its co-director, Donald Marron, says capping deductions for all taxpayers at $17,000 could produce $1.7 trillion in revenue over 10 years. That would meet the president's dollar goal. But there's one problem, Marron says.

"That would get to the president's revenue target, but obviously it would violate his desire not to raise taxes on people below the top 2 percent," he says.

Of course, Marron says, Republicans don't agree with the president that $1.6 trillion in added tax revenue over the next 10 years is the right goal.

"There's also been discussion of aiming for $1 trillion rather than $1.6 trillion, and obviously $1 trillion would be easier to get to by doing things purely through deductions and exclusions and other tax breaks," Marron says.

If you push that cap on deductions higher, let's say, up to $25,000, you could meet that $1 trillion revenue target. But you still don't eliminate the political problem, because around a quarter of the added tax burden would still fall on the middle-class taxpayers the president has pledged to protect.

Marron does believe that eliminating many of the deductions and loopholes in the tax code is a good idea and could make the economy more efficient. But he says it needs to be done thoughtfully and deliberately.

"You know, if we had a rational, careful process, we would go through all of them one by one and decide whether to keep them, to fix them or to get rid of them," Marron says.

He says dealing with the mortgage deduction provides a good example of the care that needs to be taken.

"There are many good arguments for why the mortgage interest deduction is bad policy and ought to be changed or eliminated. But you wouldn't want to do that tomorrow. That would be unfair to the people who've just bought a home on the expectation that they would have it. The housing market is weak."

And ending the deduction could send the housing market back into the tank. Marron says it's the same with many of the other deductions that don't make sense. If they're going to be eliminated, Congress needs to figure out a way to phase them out slowly to give people time to adjust.