Accessibility links
Roughing Up Rice: GOP Senators Play The Personal And Political : It's All Politics History suggests that Susan Rice will be confirmed, if nominated for secretary of state. But some Republicans may be focusing on her statements about Benghazi to discredit the Obama administration. Here's a look at that possibility, and what else might be part of the Capitol Hill wrangling.

Roughing Up Rice: GOP Senators Play The Personal And Political

Roughing Up Rice: GOP Senators Play The Personal And Political 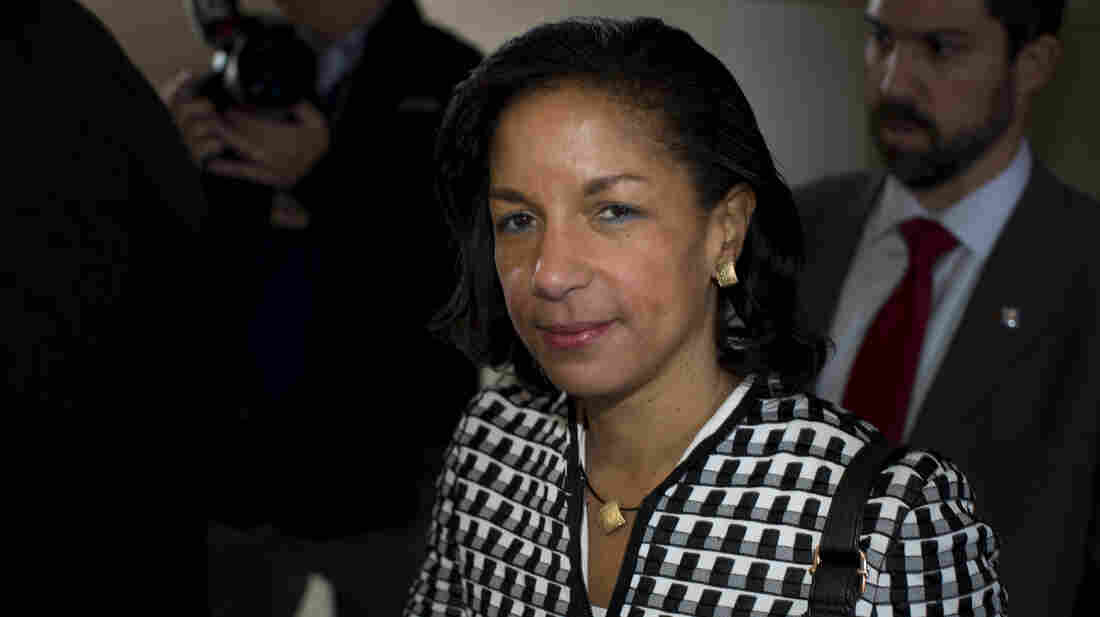 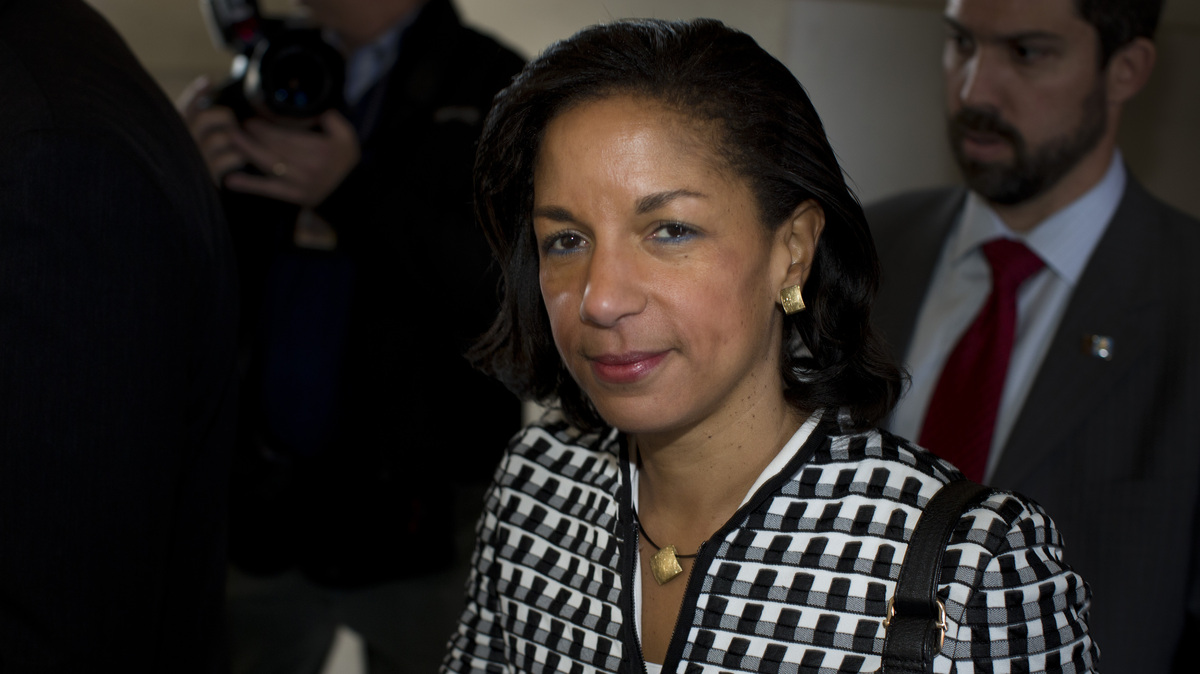 The GOP's roughing up of U.N. Ambassador Susan Rice, thought to be President Obama's top pick for his second-term secretary of state, brings to mind the last time the Senate rejected a commander in chief's choice for that most crucial position.

It was some six decades ago, and after bitter and tumultuous hearings — think allegations of communism and homosexuality, as well as a high-profile suicide — that senators dumped the president's nominee by a vote of 74-24.

One historical note: That didn't actually occur under the Capitol dome. It was a 1959 work of Pulitzer Prize-winning fiction by Allen Drury.

"I can only recall that happening in Advise and Consent," Drury's novel, says Ira Shapiro, a former longtime Senate staffer and author of The Last Great Senate.

A similar real-life scenario featuring Obama nominating Rice, and given what Shapiro characterizes as her strong record at the United Nations, would be "stunning," he says.

Secretary of State Nominees Who Recieved Nay Votes in Senate

In fact, it would be more than that.

Which brings us to this: As Republican senators John McCain of Arizona, Lindsey Graham of South Carolina and Kelly Ayotte of New Hampshire dig in their heels against Rice, based on her dissemination of now-acknowledged misinformation after the Sept. 11 murders of a U.S. ambassador and three Americans in Libya, what is their expectation?

The three, after meeting Tuesday with Rice on Capitol Hill, ostensibly to clear the air, pronounced themselves more "disturbed" than ever by her earlier recitation on national television of CIA talking points about the origins of the attack on the American Consulate in Benghazi.

On Wednesday, Rice was back on Capitol Hill to meet with moderate Republican Sen. Susan Collins of Maine, who also emerged unimpressed. "I continue to be troubled by the fact that the U.N. ambassador decided to play what was essentially a political role at the height of the contentious presidential election campaign," Collins told reporters, "by agreeing to go on the Sunday shows to present the administration's position."

Their pursuit of Rice, just a prospective nominee but one who, during a recent press conference, the president heatedly defended against GOP attacks, certainly has elements of legitimate policy inquiry.

But as are all things Washington, it also is liberally peppered with politics and the personal.

Robert Draper, the author of Do Not Ask What Good We Do: Inside the U.S. House of Representatives, views the anti-Rice agitating as emblematic of the GOP's post-election convulsions.

"The Republicans are still struggling to find a foothold after the elections," says Draper, who was in Benghazi reporting a story for National Geographic three months before the consulate attacks.

Ninety-seven House Republicans signed a letter to Obama characterizing Rice as "unfit" to succeed Hillary Clinton as secretary of state.

Who Is Susan Rice?

"They seem at pains to make something out of the Benghazi tragedy that reflects on high-ranking members of the Obama administration," he says.

That answers, in part, the "why now, the election is over" question about their pursuit of Rice.

The other political part of the answer is that the Benghazi debacle has been elevated by Fox News and other conservatives to "scandal" level, and that has implications for Republicans facing re-election in the near future.

"Sen. Graham is well aware that he's going to face a primary in 2014 when he runs again," Draper says.

He predicted a potential challenge from conservative South Carolina GOP Rep. Mick Mulvaney, whose campaigns have enjoyed significant contributions from the small-government advocates at Club for Growth

The club, which has already targeted Graham for defeat in two years, has been instrumental in taking out Republicans not deemed conservative enough, including veteran GOP Sen. Richard Lugar in Indiana, who was toppled in a party primary this year.

"Sen. Graham is always adroit at positioning himself when he needs to," Draper says. "He's playing this for all its worth to the right, even though his colleagues may have no appetite for this fight."

Ayotte, who has pledged to place a hold on Rice's nomination should the president pick her, has made her own political calculation in taking on the female, African-American U.N. ambassador.

A relatively new member of the Senate, and one of only four female Republicans who will serve in the chamber in the coming session, Ayotte has decided to make this her first big foray onto the national scene.

Ayotte has already been forced to defend her objections to Rice, and those of Graham and McCain, as not rooted in racism or sexism.

One of the niggling questions the senators face is whether they would be kicking up a fuss if, say, it had been Democratic Sen. John Kerry — also considered a potential secretary of state candidate and preferred by his Senate colleagues — instead of Rice who delivered the CIA talking points on television.

Liberals think not, as reflected in a recent headline from the website Daily Kos, which characterized attacks on Rice as "racist, sexist, hypocritical bafflegab."

"It's worth remembering," says Shapiro, the author and a Washington lawyer, "that eight years ago the Senate confirmed Condoleezza Rice by a vote of 85-13 despite deep divisions over the Iraq War and her performance as national security adviser."

McCain, who lost the presidential race to Obama in 2008, has never been an admirer of the man who smote him — particularly on issues of foreign policy. 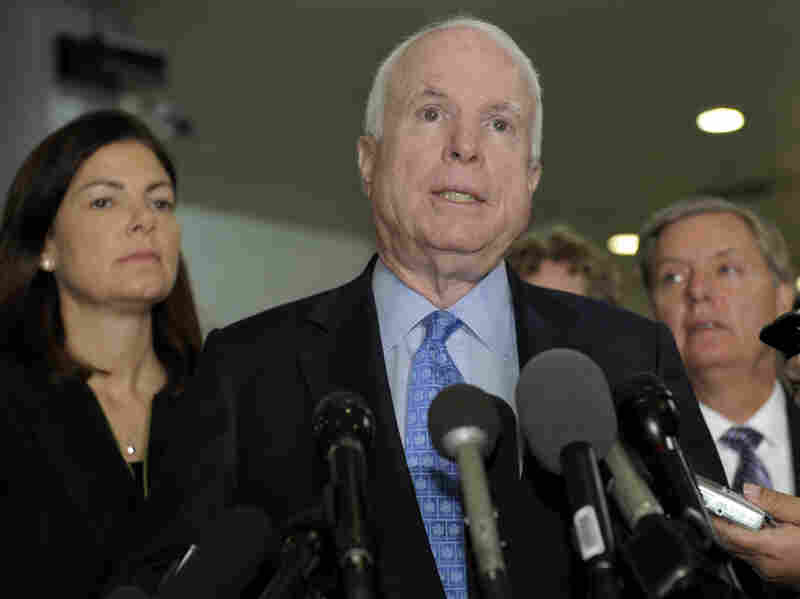 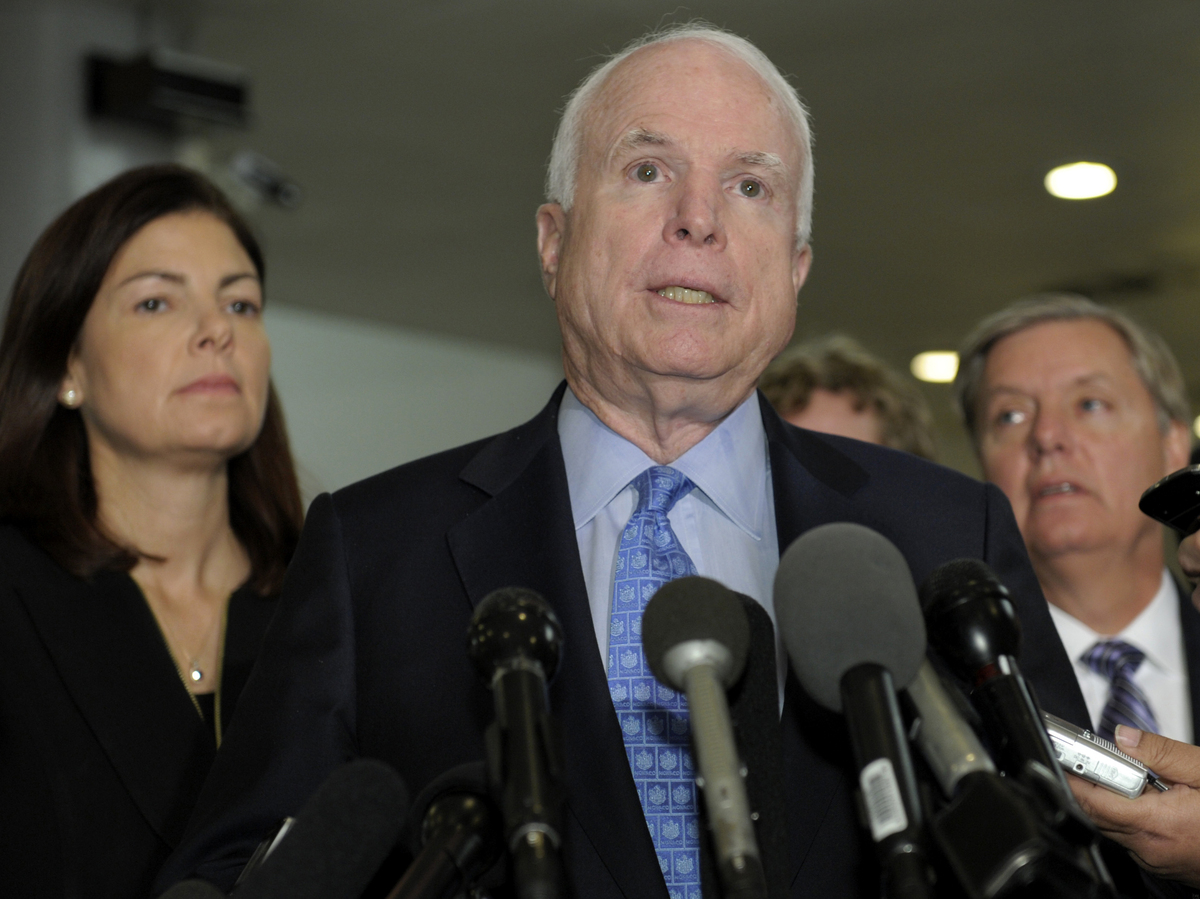 That animus has been extended to Rice, a Rhodes scholar and Phi Beta Kappa Stanford graduate whom he has characterized as "not very bright."

McCain, who graduated fifth from the bottom in his Naval Academy graduating class of 899, has also pronounced Rice "not qualified" to be secretary of state.

But Draper argues that McCain, 76, whose fifth Senate term runs through 2016, is not "ginning this up for political sake — he'll never run again."

"And I don't think that it's out of pure contempt for Barack Obama," says Draper, "except for his real feeling that Obama has insufficient gravitas and a lack of good judgment and experience in foreign policy."

Those feelings, he said, go back to 2007 when the men were on a political collision course; and McCain has been quick to see incompetence in the Benghazi tragedy.

There is little question that things went very wrong at the American Consulate in Benghazi on Sept. 11, and there is no question now that it was not caused by an incendiary anti-Muslim video, as Rice once asserted.

"[The Republican senators] have a legitimate interest in ascertaining the full Benghazi story, if they don't already have it," Shapiro says. "This issue, as well as all the larger foreign policy issues, will undoubtedly be the subject of intense questioning in confirmation hearings after the president chooses his nominee."

Those familiar with the Benghazi tragedy say there are lingering questions about why the Defense Department couldn't get military support to the consulate more quickly once it was under attack. There are more serious questions about whether or not the State Department had adequate security at the consulate, and whether requests for additional security were ignored or not adequately fulfilled.

The CIA, however, has pushed back on the notion that it was told to stand down, and timelines appear to debunk those criticisms.

What Draper says he saw in Benghazi in June was a place whose people were embracing of Americans and democracy, but destabilized by a lack of government and porous borders.

"I think most people can agree that there were real complications or mistakes made that led to the Benghazi tragedy," he said, noting that because of the peacefulness of Libyans he encountered, he was convinced from the outset that the consulate attack was fomented by outside forces.

"Libya is an ungoverned and porous place," says Draper, a contract writer for National Geographic and The New York Times Magazine. "If you want to cause trouble in the Arab world, Libya is a good place."

A small cadre of Republican senators is trying to lay that trouble at the feet of Ambassador Rice. History suggests that, if nominated, Rice will be confirmed.

"I just don't think that Republicans have sufficient appetite to throw everything on the table for that," Draper says.

Rice might not be the most popular person in official Washington — Washington Post columnist Dana Milbank wrote that "she has made an impressive array of enemies" in the nation's capital, including McCain, whose 2008 trip to Iraq she characterized as "strolling around the market in a flak jacket."

But if the president wants her, he'll very likely get her. And maybe along the way, the Republicans will get Benghazi answers that will satisfy.