Accessibility links
Obama And Boehner Call It Negotiation; The Rest Of Us Are Permitted To Laugh : It's All Politics As the president and House speaker try to lead the nation away from the so-called fiscal cliff, experts in the art of negotiation say they're not impressed. "Much of this process is theater," says one. "I think that now, everyone needs to shut up and get to work."

Obama And Boehner Call It Negotiation; The Rest Of Us Are Permitted To Laugh

Obama And Boehner Call It Negotiation; The Rest Of Us Are Permitted To Laugh 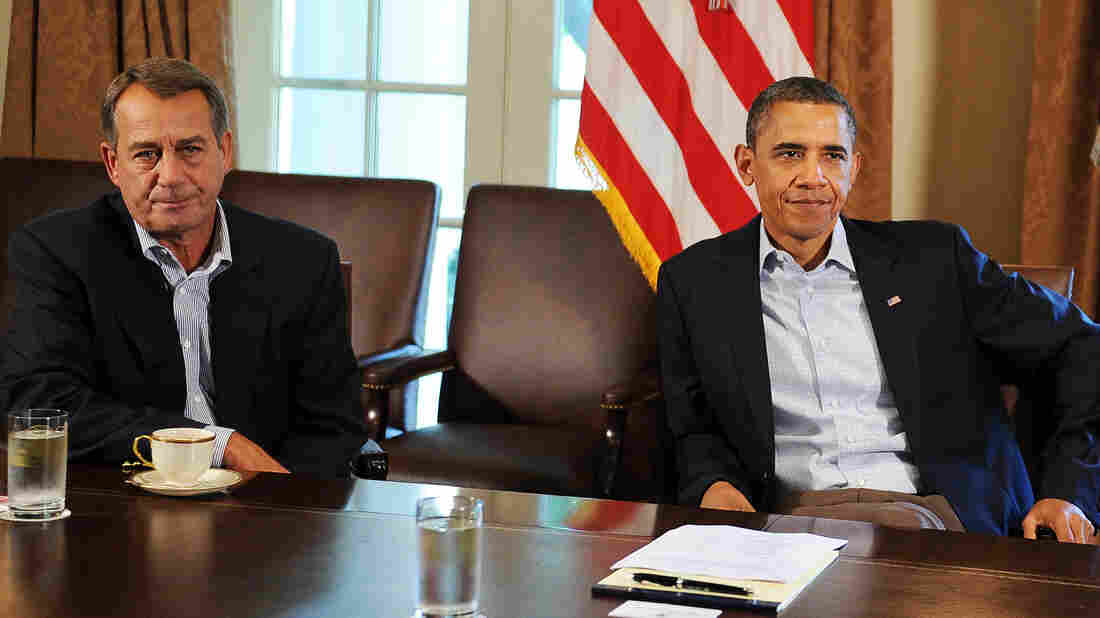 President Obama and House Speaker John Boehner meet in the White House on July 23, 2011. At that time, they were discussing how to avert a debt default. The talks ultimately led to the deal that now brings us aspects of the so-called fiscal cliff. Jewel Samad/AFP/Getty Images hide caption 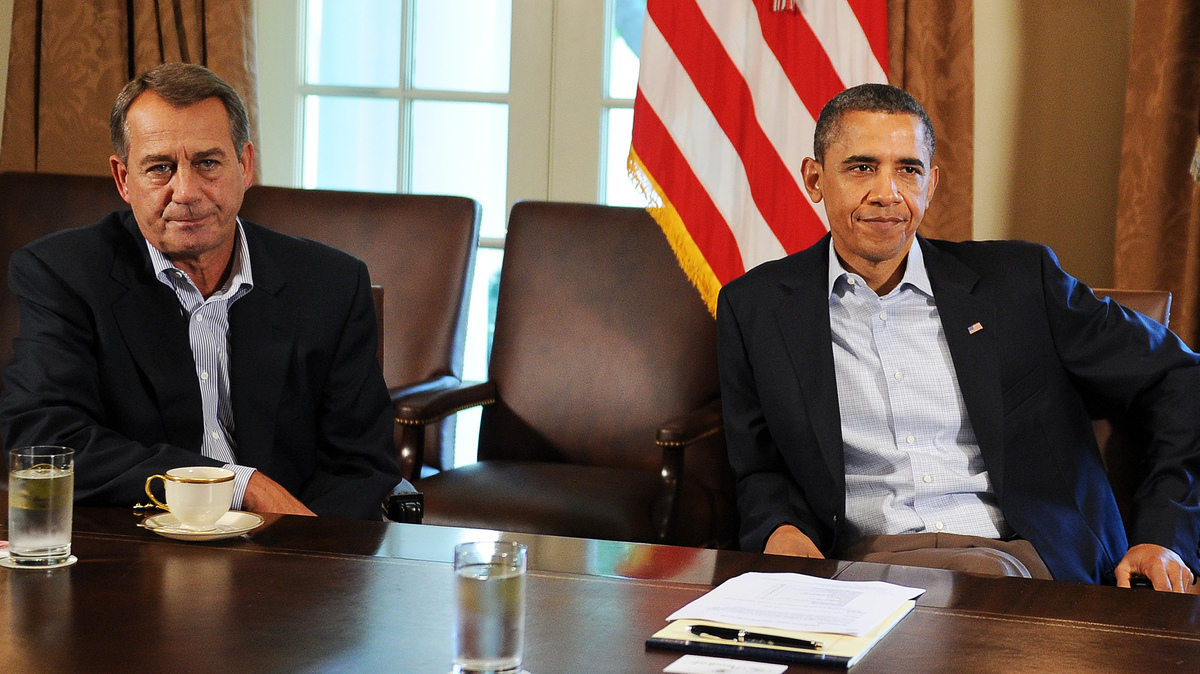 President Obama and House Speaker John Boehner meet in the White House on July 23, 2011. At that time, they were discussing how to avert a debt default. The talks ultimately led to the deal that now brings us aspects of the so-called fiscal cliff.

If you're tempted to throw back your head and guffaw when you hear the word "negotiation" linked with "Congress" and "fiscal cliff," please, don't hesitate.

Because what you're seeing play out publicly between congressional Republicans and Democrats and the White House bears little resemblance to negotiation.

"The game that's being played is the same game that's been played over the past few years — brinksmanship, and hard positional bargaining," says William Ury, who knows negotiation when he sees it.

A co-founder of Harvard's Program on Negotiation, Ury has advised and mediated conflicts ranging from those in the Middle East to the former Soviet Union. He's also written best-selling books on productive negotiations.

It's a not-so-productive scenario when, as has been happening on Capitol Hill, positions are staked out publicly, attacks commence, and the conversation is about who wins and who loses, he says.

"These negotiations are looking like classic 'positional bargaining' brinksmanship," says Patton, also a co-founder of the Harvard negotiation program. And that, he says, tends to promote very little creativity in reaching resolution, and the expectation of "late-night, last-minute compromises."

As the White House and a divided Congress stumble toward another fiscal deadline — this one occurs Dec. 31, when more than $6 billion in automatic tax increases and spending cuts kick in if there's no budget deal — we turned our tired eyes to Ury, Patton, and other noted negotiators for some perspective.

The Third Side? It's All Of Us

"Much of this process is theater," says Jim Thomas, author of Negotiate to Win: the 21 Rules for Successful Negotiating. "I think that now, everyone needs to shut up and get to work."

There's no question that a deal could be reached with a commitment to real negotiation, the pros say, especially now that President Obama and Republican leaders have issued their opening offers — no matter how distasteful to the other side.

GOP House Speaker John Boehner characterized as coming from "la-la land" the president's proposal, which would roll back Bush-era tax cuts for Americans earning more than $250,000.

The White House says the Republican proposal "does not meet the test of balance" between new revenue (taxes) and spending cuts.

Doesn't sound promising, but it's a start.

And getting to a deal even given the circumstances, Ury says, could be straightforward — but deceptively so.

As he noted in a 2010 TED talk about negotiating to end conflict: "It's not easy. But it's simple." 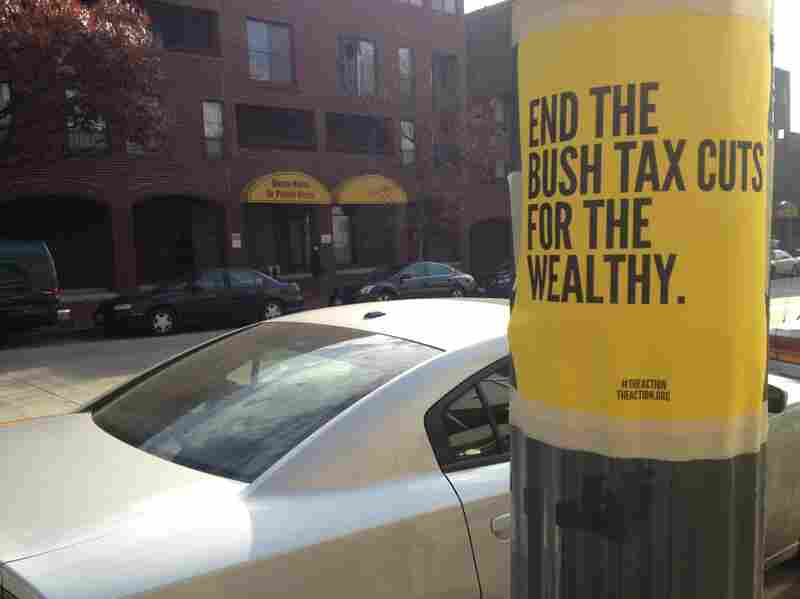 A sign in downtown Washington, D.C., on Tuesday. The president, congressional Republicans and outside groups all are trying to rally public support for their positions in the fiscal talks. Liz Halloran/NPR hide caption 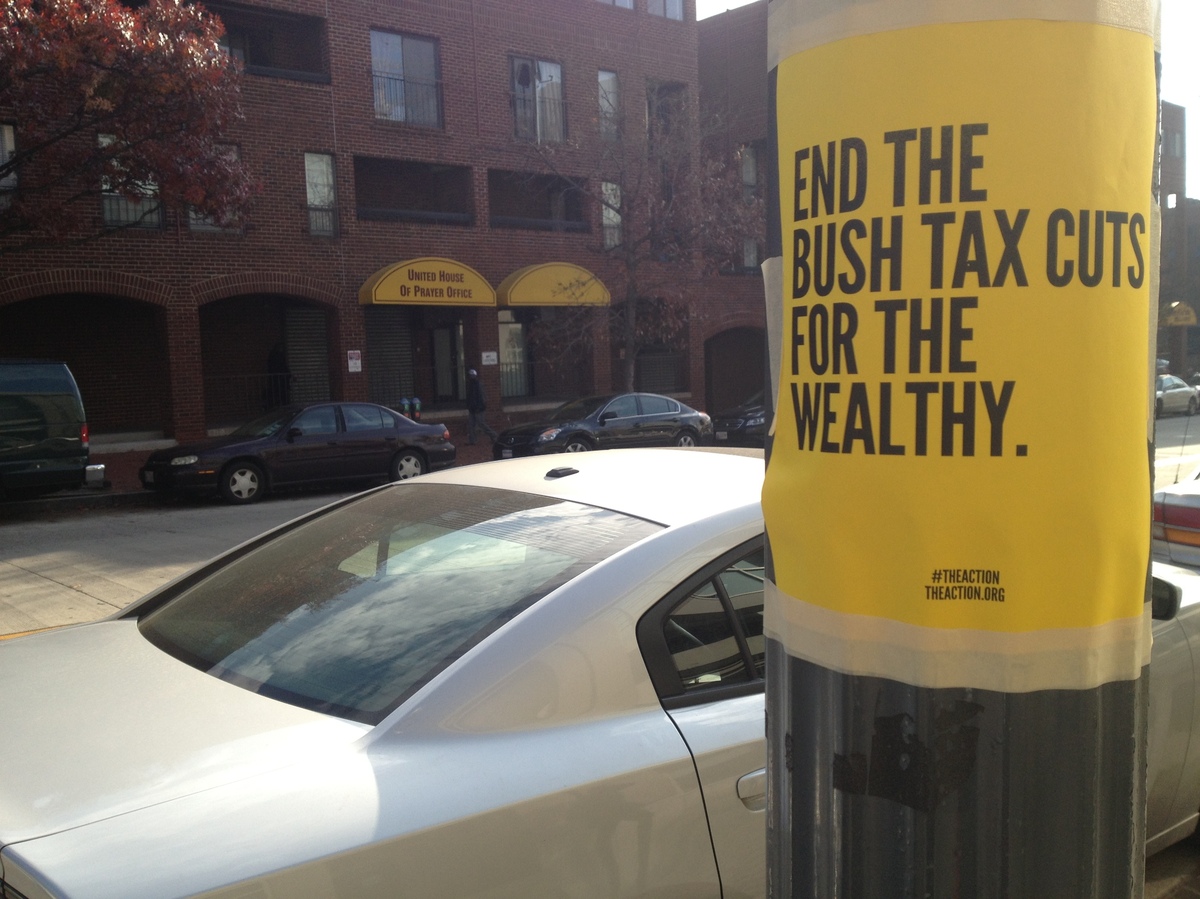 A sign in downtown Washington, D.C., on Tuesday. The president, congressional Republicans and outside groups all are trying to rally public support for their positions in the fiscal talks.

He argues that perhaps the most important element in reaching resolution between two sides in difficult matters — in Congress, in international strife, at home — is the consideration of the "third side," or those most affected by the outcome.

"The third side here clearly is the American people," Ury says. "They have the most to lose." Their stories matter, he says, in framing the negotiations because they, metaphorically, send the parties in dispute "to the balcony" for perspective.

Maybe Obama has listened to Ury in the past, because his recent campaign-style trip to Pennsylvania, as well as his appearance Monday to answer questions on Twitter and the White House push to have people share their economic stories on social media sites, has the markings of an attempt to engage that "third side."

New polls suggest the outreach may be working: Most Americans surveyed said they would be more apt to blame Republicans than they would the president for a budget impasse.

"What I think people long for is a more creative discussion," Patton says.

He and Ury agree that at this point, it appears that if there's no budget deal before the end of the year, Obama will very likely fare better in the public's eye in the short run than congressional Republicans.

"Once the Bush tax cuts expire, he'll be proposing tax cuts for the middle class, and more spending on defense," in the new year, Patton says. "That will be hard for the Republicans to vote against."

A Nation Of Bad Negotiators?

Thomas, the Negotiate to Win author who helps negotiate for clients around the world, says that Americans are just flat-out poor negotiators, more prone to John Wayne posturing and ad hominem attacks than diplomacy.

He explains it like this: When a new proposal is worse in the eyes of the other side than the last best offer, as Obama's was to Republicans, that's "escalation."

"The only thing worse," he says, "is a personal attack."

However, since Obama's last best offer, things have decidedly changed.

During the last budget negotiations, Democrats were coming off what Obama himself characterized as a "shellacking" in the 2010 midterm elections.

Obama has now won re-election, and Democrats increased their majority in the Senate and added to their minority numbers in the House. The White House, not without reason, views this as a whole new negotiation, with past offers — including the last best one that Boehner rejected in the summer of 2011 — as inoperable.

Thomas advocates having the negotiations go dark publicly, and the two sides work around the clock to hash out a deal. It's the "less mature" politicians, he says, who will continue to participate in the grandstanding.

Truly successful negotiations involve putting aside ego, and listening to what is driving the demands of the other side, Ury says.

"If you were to listen to Grover Norquist, as I have, what's driving him, what he's really interested in is his belief in the erosion of liberty in this country, and that large government gets addicted to taxes," Ury says.

There are creative ways, he argues, to respect Norquist's beliefs, and those of like-minded people, in a way not antithetical to people on the other side who want to create, for example, a safety net to protect the country's most vulnerable.

"When you start thinking of ways to do that, it becomes a different question," Ury says. "We have to craft a deal in which neither side loses, and the American people win."

It's All About The BATNA

But he acknowledges that it's become a game of who blinks first.

That suggests that the movement on Capitol Hill is toward what those in the negotiation world refer to as the "best alternative to a negotiated agreement," or BATNA. In laymen's terms, BATNA is the best course of action that would satisfy one's interest if an actual agreement can't be reached.

Obama's BATNA, Ury suggests, may be to go over the fiscal cliff, which would allow Bush-era tax cuts across the board to expire. Then, in the new year, he could introduce legislation that would roll back the taxes on the middle class.

The Republicans' BATNA? The president gets blamed if there's no deal to avoid the automatic cuts and tax rollbacks that come with going over the fiscal cliff.

"If I look at the BATNA right now, the president's is slightly stronger in the short term because of the automatic expiration of the tax increases," Ury says.

But, he adds: "From a negotiation analyst's view, you can see a zone of agreement that lies between each one's BATNA."

The BATNA way is not the optimal way.

"To me," Ury says, "the advantages of negotiation, and negotiating now, far outweigh the BATNA." Any victory, he argues, would be pyrrhic given the countless issues, including more debt ceiling debates, that the president and Congress will face.

But right now, anyway, it appears that all of us on the third side will be getting a big bag of BATNA for the holidays.

Unless, as Thomas suggests, the jet fumes of planes waiting to take members of Congress home for the holidays inject the process with urgency.

"Just remember — if the tax cuts expire, they can be reinstated. If we go off the cliff, it's economic tough love," he says.

In other words, deadlock in these "negotiations" when everyone's hair is on fire, he says, "might be a good thing."

Even if it's a failure of true negotiations.