Accessibility links
Looming Spending Cuts Would Hit Hard All Over : It's All Politics If Congress fails to reach an agreement on tax increases and spending cuts this year, it will mean sharp reductions in a broad swath of federal spending, from defense and Medicare to education and unemployment benefits. Economists say the cuts would be a serious setback for the economy as a whole. 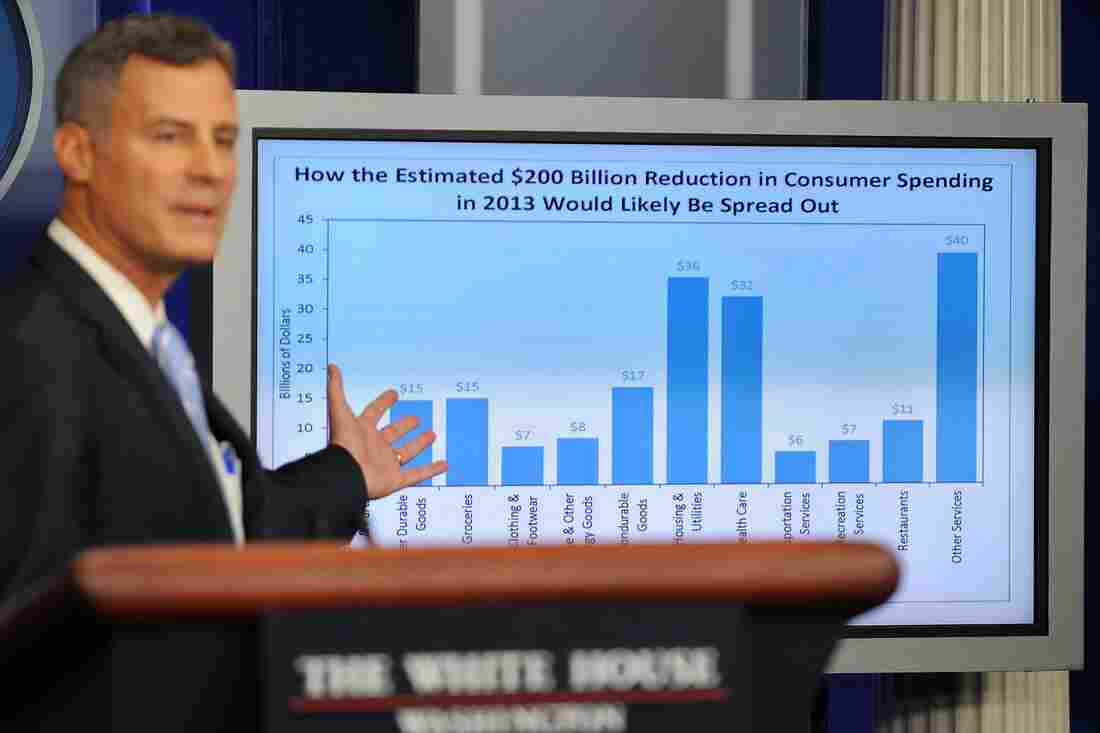 Alan Krueger, chairman of the president's Council of Economic Advisers, warns that consumer spending will drop if Congress and the White House fail to reach a deal on spending cuts and tax increases. Jewel Samad/AFP/Getty Images hide caption 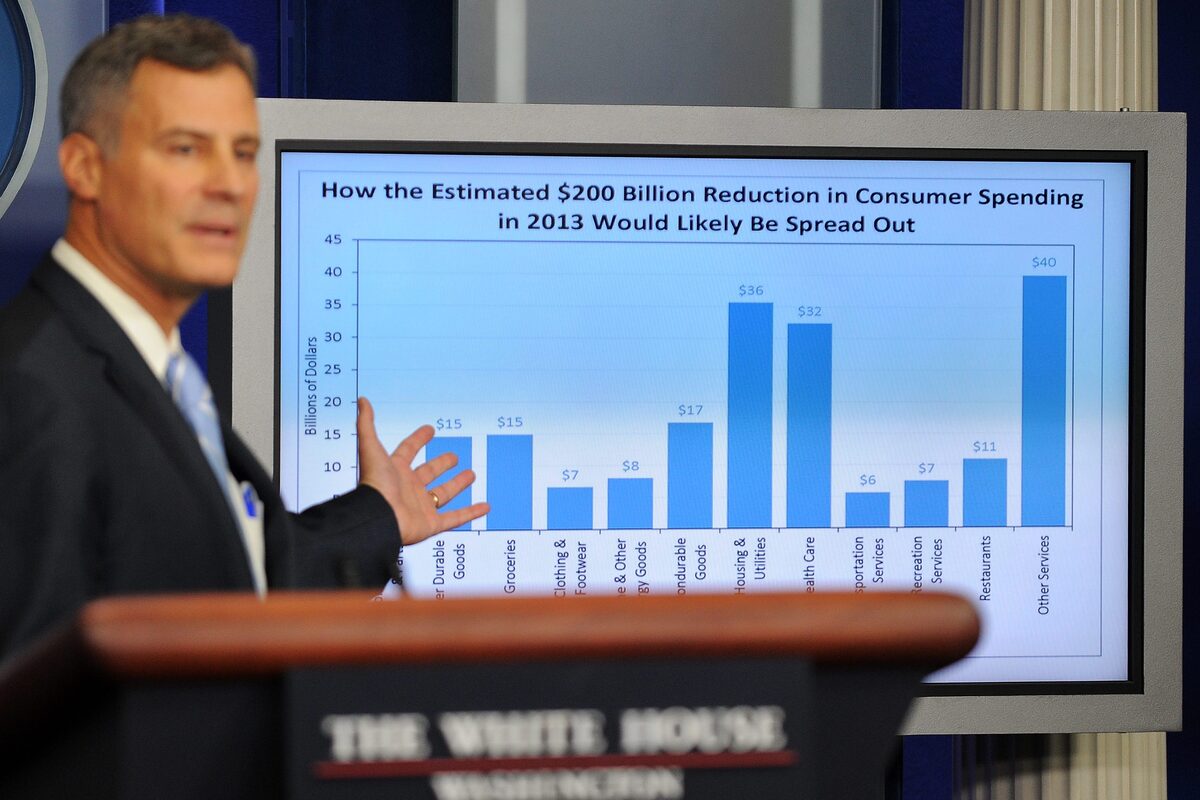 Alan Krueger, chairman of the president's Council of Economic Advisers, warns that consumer spending will drop if Congress and the White House fail to reach a deal on spending cuts and tax increases.

Tax increases are only a part of what lies ahead if Congress can't come to an agreement to avert the fiscal cliff by the new year. Massive spending cuts will also kick in — and those cuts will be felt throughout the economy.

The current stalemate got under way two years ago when Congress, locked in a bitter partisan battle over whether to extend the George W. Bush-era tax cuts, passed what was known as the Budget Control Act of 2011.

If Congress couldn't resolve its spending battles by the end of 2012, the law said, there would be what are called "sequester cuts" — automatic, massive reductions in nearly every part of the budget.

"Each particular program which would be affected would all be cut pretty much by the same percentage amount," Leahey says. "And it would not be done rationally — it would just be done that you cut all programs the same."

Altogether, the cuts would eliminate more than $110 billion in federal spending in 2013 alone. Nearly half of that would be in defense spending. But there would also be cuts in education, health care and law enforcement. Much of that money goes to the states in the form of grants.

"State budget officers and policymakers have already had to make a series of really serious decisions on balancing their budgets," says Ingrid Schroeder, director of the Fiscal Analysis Initiative at the Pew Center on the States. "This is going to add a whole other layer of complexity to some already tough decisions that they've made."

Obama and Boehner Call It Negotiation; The Rest of Us Are Permitted To Laugh

'You're Going To Feel It'

Schroeder says states like Virginia and Maryland, which depend heavily on federal spending, will take a hit, as will states with a strong military presence, like Hawaii. Former Federal Reserve Vice Chairman Alan Blinder says cuts in defense spending have a way of spilling over into the rest of the economy.

"If you run a business near a military base — a cafe, a grocery store, a bowling alley ... a restaurant, anything — and the military base has meaningful cutbacks in spending, you're going to feel it as a civilian," Blinder says.

But even without this kind of spillover effect, Blinder says the looming sequester cuts will slow the economy at a time when it's already weak. He says the cuts could reduce economic activity by anywhere from 0.7 percent to 1 percent.

And a 1 percent reduction in economic activity, he says, means about a 1 percent cut in the labor market.

"And 1 percent of employment in the United States now is roughly 1.3 million jobs," Blinder says. "That's not good."

Blinder notes that the cuts won't necessarily happen right away; the government, he says, has some wiggle room about when it implements them. So if the two sides are close to an agreement on Jan. 1, they can stall a bit. But he also says the window for solving the dispute is closing.

"My judgment would be that if this is not settled by the second half of January, we're going to feel severe effects on the economy."

And there are signs the effects are already being felt. Leahey, of Decision Economics, says companies need time to plan when they bring in new people — and that they may already be holding back on hiring in anticipation of the cuts.

"So if the numbers for this Friday's employment report are dismal, it may not be [due to Hurricane Sandy] — it may be preparing for these sequester cuts," Leahey says.

All of this will be happening at a time when consumers are already feeling the bite from higher taxes — and that could be an even bigger problem for the economy.