Accessibility links
DeMint's Exit Creates Political Ripples, Raises Questions For Tea Party : It's All Politics Sen. Jim DeMint, R-S.C., an early supporter of the Tea Party movement who helped foster its growth in Congress and worked for the election of like-minded lawmakers, is leaving to run the conservative Heritage Foundation. His exit set in motion political maneuvers from Columbia, S.C., to Washington, D.C. 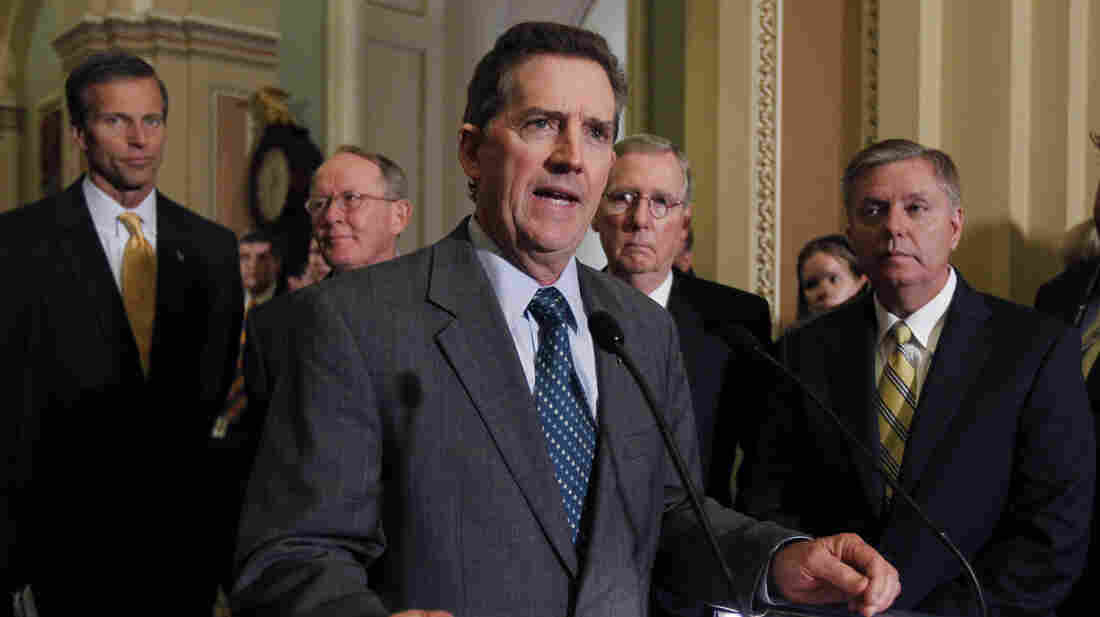 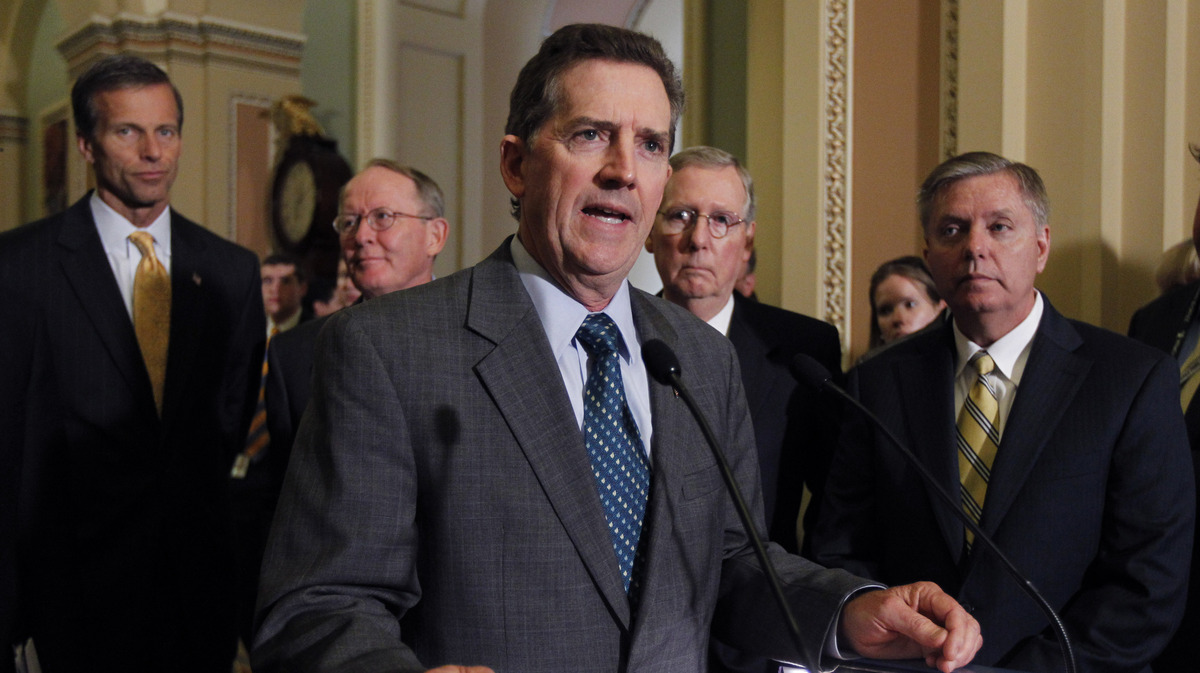 When Thursday dawned in Washington, some things seemed certain: The fiscal cliff fight would continue; the National Christmas Tree would be aglow by evening, and Sen. Jim DeMint of South Carolina would continue to be the Senate's most important Tea Party voice.

So much for Washington certainties.

With his surprise announcement that he was exiting the Senate to head the Heritage Foundation think tank, a job that paid his predecessor $1 million annually, DeMint brought to an end his role as the Tea Party's godfather in the Senate.

As with most political news out of Washington, how the announcement was interpreted had a lot to do with who was doing the interpreting.

While some progressives read DeMint's departure as the latest sign of a Tea Party movement in retreat — especially after an unfavorable general election — others saw a potential upside for conservatives: DeMint could very well use his new position running the influential Heritage Foundation to advance fiscal conservatism to greater effect than if he had remained among the minority party in the Senate.

'Biggest Senate Casualty Of The Election'

But there also was a note of unhappiness in right-wing circles, certainly mingled with any thoughts that DeMint's exit from Congress might reap benefits for their causes.

"We're sad to see him leave the Senate, but thrilled to see him taking over at Heritage, where he may be even more effective than in the new Congress," said Dean Clancy, legislative counsel for FreedomWorks, a Tea Party-aligned group.

"I think he had done as much as a man could do to restore liberty and constitutionalism in the Senate," said Clancy. "Now he can work to do that from the outside. Our movement is focused in the House and in the states. From Heritage, he can help educate and inspire in those places."

Bob MacGuffie, a grass-roots leader of the Tea Party movement in Connecticut, said: "It's unfortunate news, certainly, that Sen. DeMint is leaving. He may be the biggest Senate casualty of the election."

From a sheer political perspective, DeMint's departure was likely to relieve some of his fellow Senate Republicans, especially Minority Leader Mitch McConnell of Kentucky.

DeMint, a senator since 2004, had become something of an alternate GOP power center to McConnell in the body, especially when it came to primaries. With his Senate Conservatives Fund, DeMint sometimes pushed for more ideological but tougher-to-elect conservatives than his party establishment would have preferred.

"The criticism didn't just come from Democrats," said David Woodard, a Clemson University political science professor who wrote a book with DeMint and has been a consultant for GOP politicians.

"He could live with that. It was the fact that he got criticized so much by Republicans. He went against the Senate (leadership)..." for instance, in 2010 backing Sen. Marco Rubio over Charlie Crist for the Senate seat from Florida. "Let's face it, it was the moderates in the Republican Party who probably hated him as much as the Democrats."

While he had his share of victories — besides Rubio there was Rand Paul of Kentucky in 2010, who beat McConnell's preferred candidate; and Ted Cruz of Texas this year — DeMint also had a string of high-profile losses.

In 2010, he backed Sharron Angle in Nevada, who lost to a highly vulnerable Senate Majority Leader Harry Reid; and Christine O'Donnell in Delaware, who fumbled what Republicans had seen as a winnable open seat.

Then there was Richard Mourdock in 2012. With DeMint's backing, Mourdock ousted six-term incumbent Sen. Richard Lugar of Indiana in the state's GOP primary, only to lose the general election to Democrat Joe Donnelly for a seat initially thought to be safe for Republicans.

DeMint's departure could also be good news for his colleague from South Carolina, Sen. Lindsey Graham. The Palmetto State's senior senator, Graham is up for re-election in 2014. Now that DeMint's seat will be subject to a special election in the same year, South Carolina politicians interested in a Senate bid have another seat to target.

Meanwhile, Graham can argue that a climate of austerity is no time for South Carolina to lose a veteran senator who might be able to limit the pain of budget cuts to a state with a significant Defense Department presence, as well as a large population of veterans.

DeMint's Senate exit, which takes effect in January, also immediately affects South Carolina politics. Republican Gov. Nikki Haley will have to appoint his successor, who will serve two years before the special election.

While there's speculation that she could name Tea Party favorite Rep. Tim Scott to the seat — which would make him the only African-American in the Senate next year — other speculation falls on Henry McMaster, the state's former attorney general.

There's even some thought that Haley, a first-term governor whose popularity has fallen significantly since her 2010 election, could even appoint herself. "I wouldn't be surprised. That would kind of fit her," said Woodard, the Clemson professor.

DeMint certainly isn't leaving the life of a working politician due to unpopularity. Woodard said his Palmetto Polls, show DeMint's approval ratings exceeding 70 percent and his disapprovals in the teens. "He's revered, if you can use that word," he said. "He's going out on top."