Accessibility links
Add This Group To Obama's Winning Coalition: 'Religiously Unaffiliated' : It's All Politics The growing number of voters not aligned with a specific religion helped President Obama overcome deficits with Protestants and Catholics in key swing states. The Pew Research Center calls this group "nones" — agnostics, atheist and those who define themselves simply as "religious" or "spiritual but not religious." 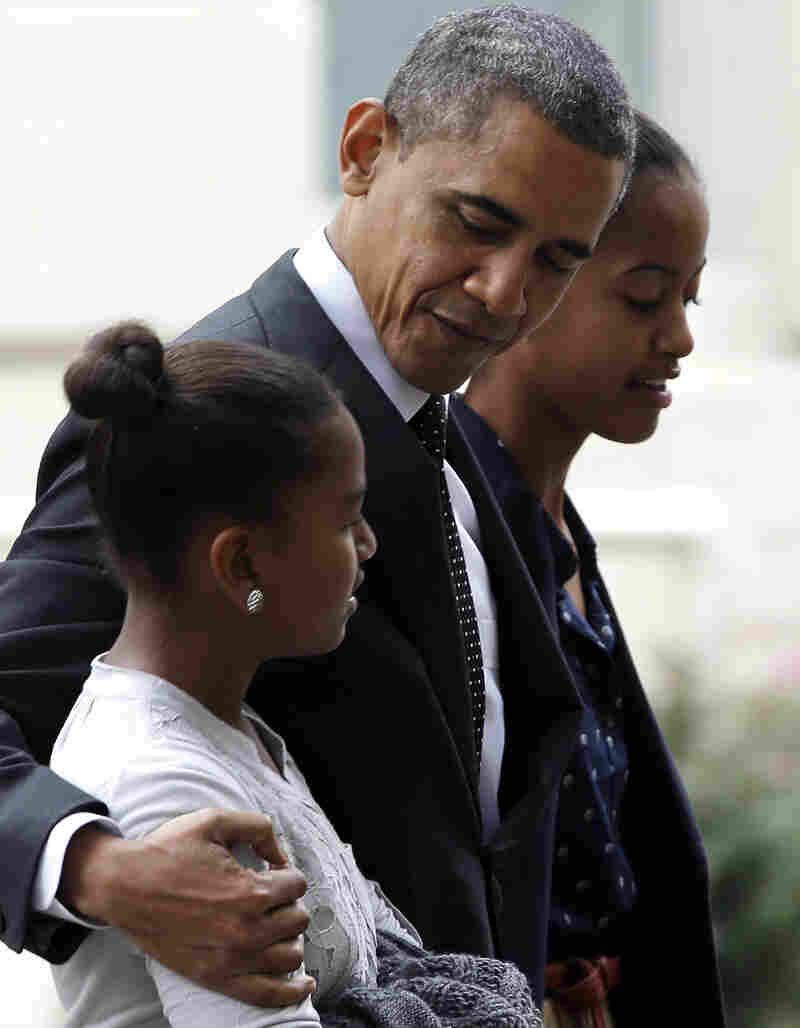 President Obama walks with his daughters Sasha, foreground, and Malia as they leave St. John's Episcopal Church in Washington, on Oct. 28. An analysis of exit polls shows that those who claim no specific religious affiliation were a key Obama voting bloc in the presidential race. Jacquelyn Martin/AP hide caption 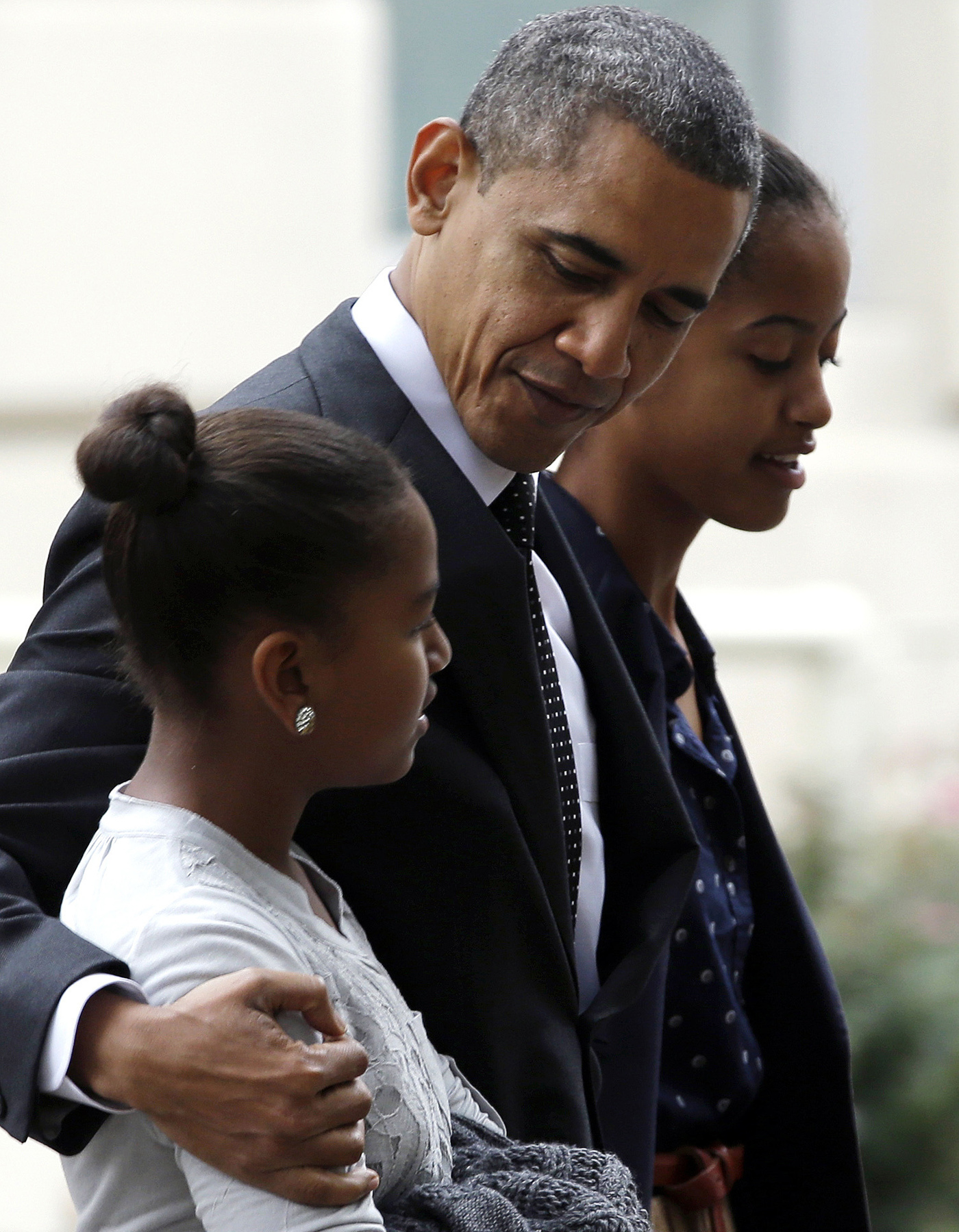 President Obama walks with his daughters Sasha, foreground, and Malia as they leave St. John's Episcopal Church in Washington, on Oct. 28. An analysis of exit polls shows that those who claim no specific religious affiliation were a key Obama voting bloc in the presidential race.

The big demographic story out of the 2012 presidential election may have been President Obama's domination of the Hispanic vote, and rightfully so.

But as we close the book on the election, it bears noting that another less obvious bloc of key swing state voters helped the president win a second term.

They're the "nones" — that's the Pew Research Center's shorthand for the growing number of American voters who don't have a specific religious affiliation. Some are agnostic, some atheist, but more than half define themselves as either "religious" or "spiritual but not religious," Pew found in a recent survey.

They are typically younger, more socially liberal than their forebears, vote Democratic, and now make up nearly 20 percent of the country's population. Exit polls suggest that 12 percent of voters on Election Day were counted as "religiously unaffiliated."

"This really is a striking development in American politics," says Gregory Smith of the Pew Forum on Religion & Public Life. "There's no question that the religiously unaffiliated are a very important, politically consequential group."

Their overwhelming support of Obama proved crucial in a number of swing states where the president lost both the Catholic and Protestant vote by single and low-double digits, but won the "nones" by capturing 70-plus percent of their votes.

Election analysts have hashed over the gender gap and the marriage gap. They talked about Hispanic voters and gay voters. But it was the religiously unaffiliated voters, says Iowa-based pollster J Ann Selzer, who gave her one of the election season's big "aha" moments.

Selzer tells us that in her last Iowa poll before Election Day, data she had compiled for the Des Moines Register showed that Obama was losing to GOP nominee Mitt Romney among both Protestant and Catholic voters.

Those voters make up 88 percent of the state's electorate, yet her final numbers still had Obama leading Romney by 5 percentage points.

"I see this in the data, and give a shout out to Michelle," Selzer says, referring to her research assistant, Michelle Yeoman.

"How is this possible?" Selzer recalls saying. "I was pretty much awestruck."

What Selzer found was that though her polling showed Romney leading among Catholics by 14 points and among Protestants by 6 points, Obama was winning the "nones" by a 52-point margin.

It defied conventional wisdom, she says, but Election Day largely bore out her numbers (though Romney's advantage with Catholics in the states was actually only 5 points) and the dynamic was replicated in a slew of other swing states the president carried.

-- In Virginia, Obama lost Protestants by 9 points and Catholics by 10 points, but won 76 percent of the "nones," who were 10 percent of the electorate.

-- In Florida, Obama lost Protestants by 16 points and Catholics by 5 points, but captured 72 percent of the "nones." They were 15 percent of the electorate.

Similar results were seen in states including Michigan, New Hampshire and Pennsylvania.

"It was hard to think this was just Iowa," Selzer said. "And it wasn't. One of the reasons Barack Obama won was that he had the 'no religion' vote by a huge margin."

Nationally, Obama lost the Protestant vote by 15 points, won the Catholic vote by 2 points, and captured 70 percent of the "nones."

"My question is what is it about having no religion that makes you align so dramatically with the Democratic Party," Selzer says. "Sociologically, how fascinating is this?"

Pew took a deep dive into this dynamic earlier this year, and came up with some answers.

"One of the things that really jumped out at us in our analysis was that this is a group that's quite socially liberal," says Smith, of Pew's Forum on Religion & Public Life.

More than three quarters of them say that abortion should be legal in most or all cases, and a similar number support the legalization of same-sex marriage.

The growth in their numbers as part of the electorate is driven in large part by generational change, and generational replacement, Smith says.

He cautions, however, against conflating the "nones" with nonbelievers.

"Those two things are not the same," Smith says. The "nones' are certainly less religious than those who say they belong to a religious group, but many are also believers.

Pew has tracked their growth, and found that in 2010 about a quarter of those in the "millennial generation" defined themselves as religiously unaffiliated. That's up from the 20 percent of Gen X-ers who said they had no religious affiliation, and 13 percent of baby boomers who said the same.

The slow, but inexorable, growth of religiously unaffiliated voters is certainly a phenomenon political parties are watching, but Smith offers at least one word of caution about where the dynamic is going.

"Religious switching is a very common thing in the United States," he said. "People go in and out of the unaffiliated column, and it's always possible that if more people switch, it could have a countervailing effect on the trends."

This presidential election, however, and the one four years ago, suggest that Democrats have a firm hold on a not-inconsequential voting bloc, one that was among the reasons Obama is in the White House for four more years.

"They will be a big piece of what we are thinking about as we look forward," Selzer says, a sentiment no doubt shared by political strategists in both major parties.