Accessibility links
Robert Bork's Supreme Court Nomination 'Changed Everything, Maybe Forever' : It's All Politics Known as a charming and witty man in private, Bork, who died Wednesday, was dour and humorless in his Senate confirmation hearings, and his answers seemed to play into the stereotype liberals painted of a man who cared little for the public. His Senate rejection changed the way future nominees have testified. 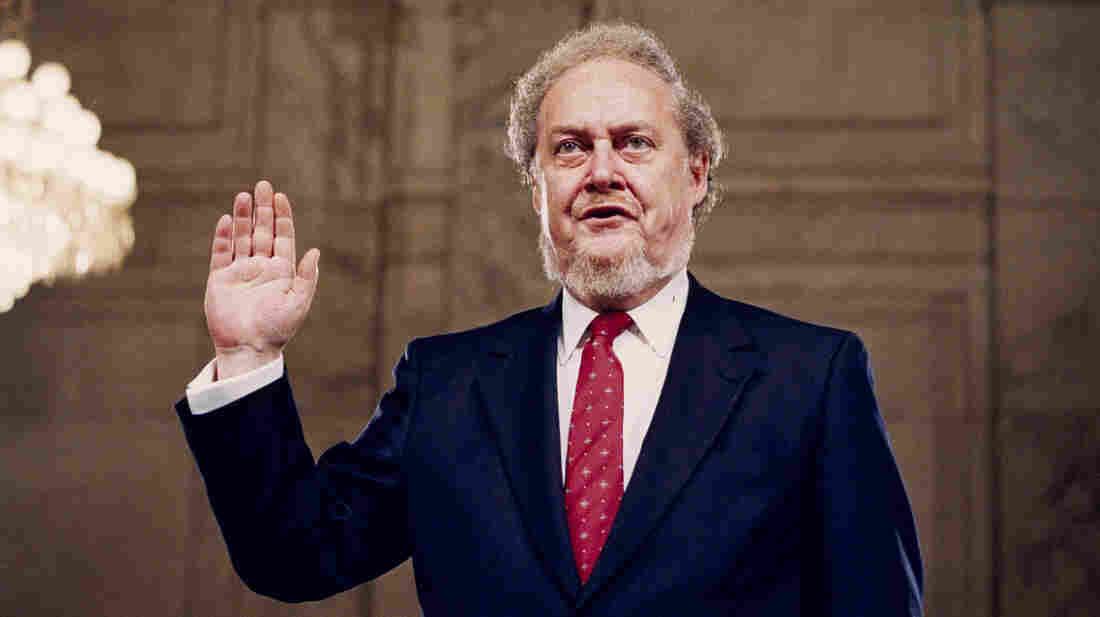 Robert Bork, nominated by President Reagan to the Supreme Court, is sworn in before the Senate Judiciary Committee at his confirmation hearing, Sept. 15, 1987. John Duricka/AP hide caption 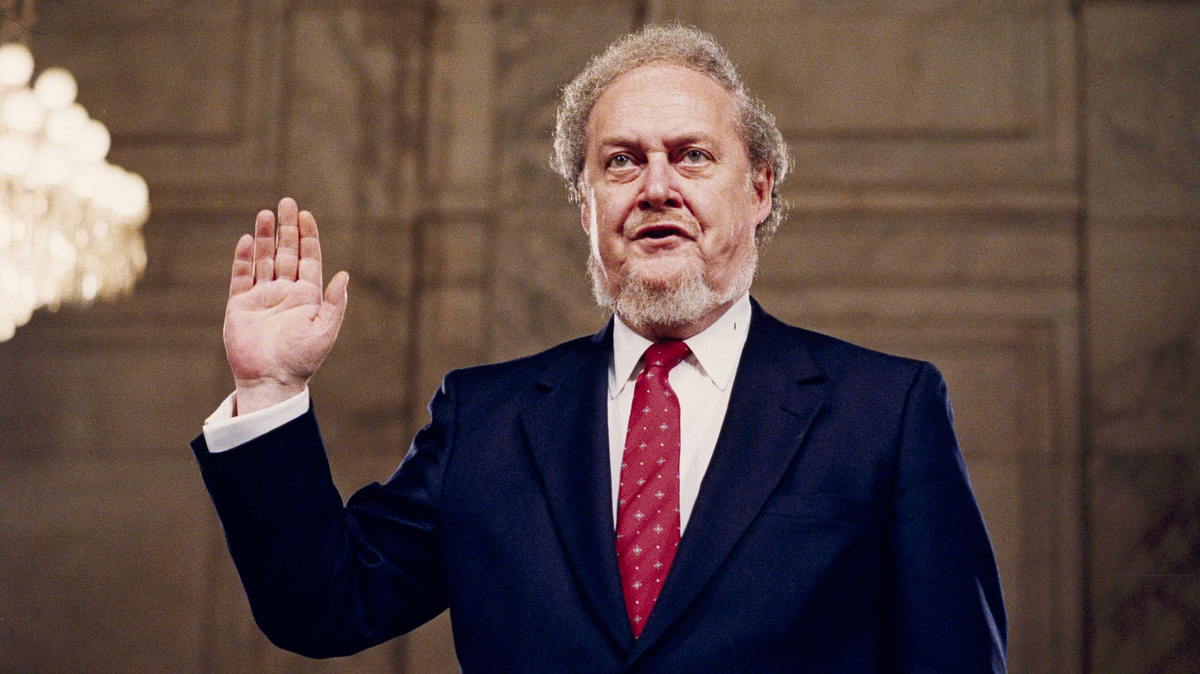 Robert Bork, nominated by President Reagan to the Supreme Court, is sworn in before the Senate Judiciary Committee at his confirmation hearing, Sept. 15, 1987.

A former federal judge and conservative legal theorist, he subsequently became a hero to modern-day conservatives. And as solicitor general in the Nixon administration, he played a small but crucial role in the Watergate crisis. In what came to be known as the Saturday Night Massacre, he fired Special Prosecutor Archibald Cox after the attorney general and deputy attorney general refused President Nixon's firing order and quit.

Bork, a ruddy-faced, bearded and burly former Marine, made his first mark in academia as a specialist in antitrust. But by the 1960s he was selling a new brand of legal conservatism, which he dubbed "original intent" — meaning that judges should go no further in interpreting the Constitution than the words of the founding document.

By the time President Reagan nominated him to the U.S. Supreme Court in 1987, Bork had spent five years as a federal appeals court judge and had in both his judicial and academic roles amassed a long paper trail of controversial legal writings.

He opposed the Supreme Court's one man, one vote decision on legislative apportionment.

He wrote an article opposing the 1964 civil rights law that required hotels, restaurants and other businesses to serve people of all races.

He opposed a 1965 Supreme Court decision that struck down a state law banning contraceptives for married couples. There is no right to privacy in the Constitution, Bork said.

And he opposed Supreme Court decisions on gender equality, too.

That record prompted liberals and civil rights activists to launch an all-out campaign to defeat the nomination, beginning with a speech by Sen. Edward Kennedy, D-Mass., on the Senate floor within hours of the nomination announcement.

"Robert Bork's America is a land in which women would be forced into back-alley abortions, blacks would sit at segregated lunch counters, rogue police could break down citizens' doors in midnight raids, and schoolchildren could not be taught about evolution," Kennedy said. 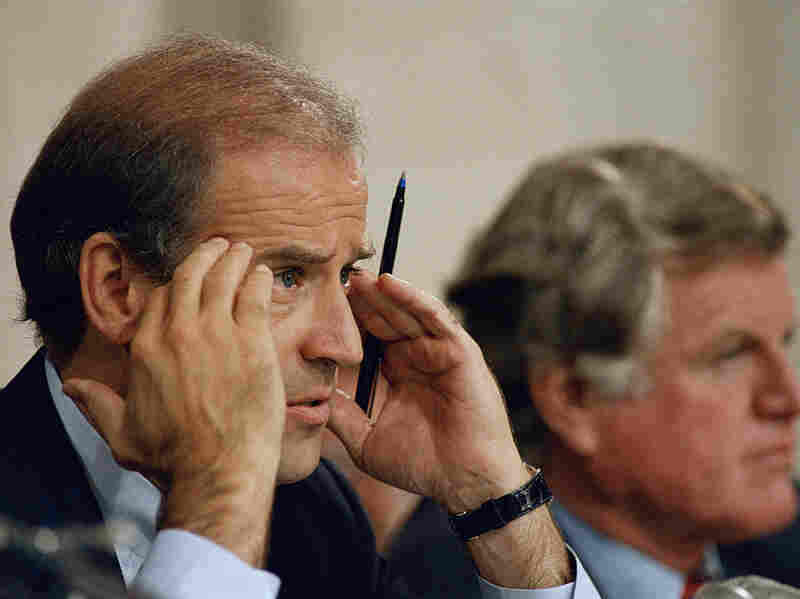 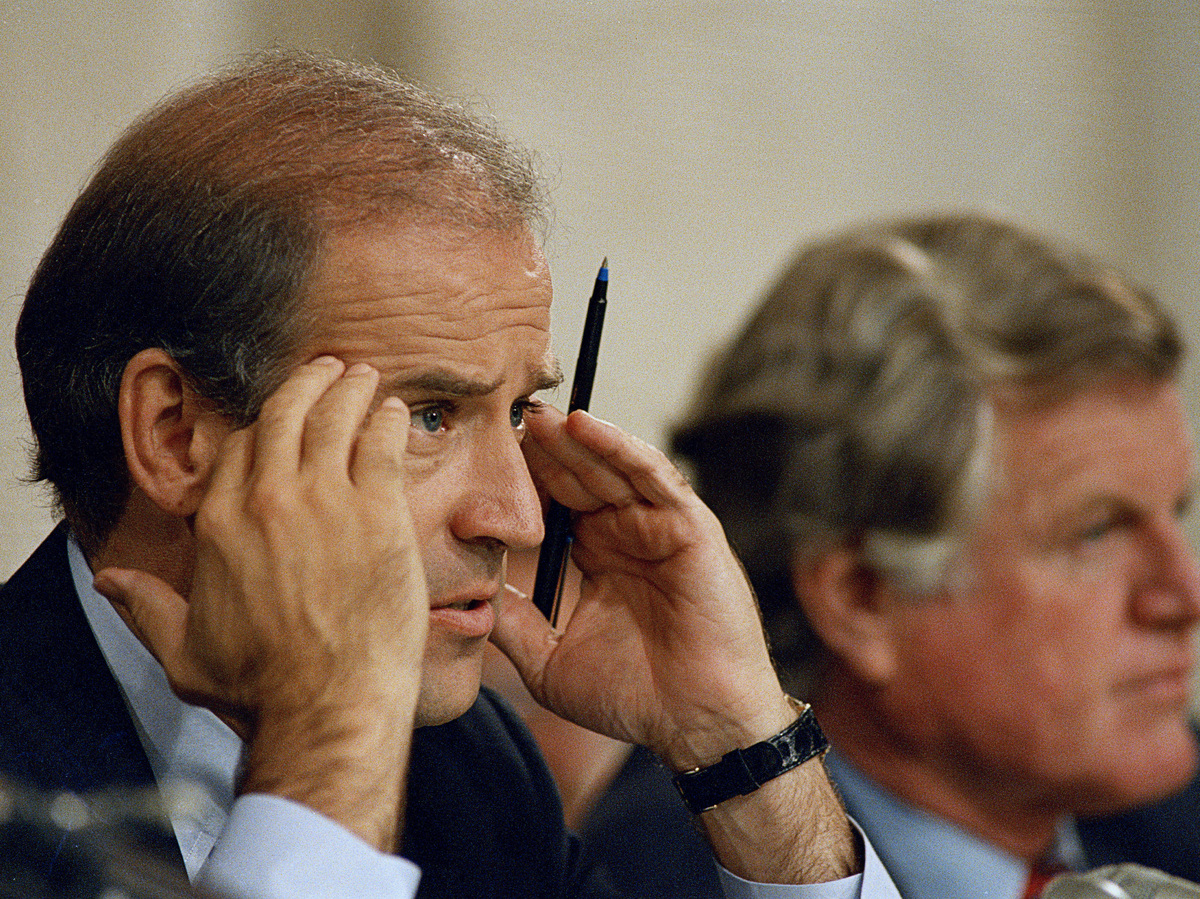 Nonetheless, two months later, when the confirmation hearings began, public opinion still was on Bork's side. The hearings, however, would not work to his advantage.

Known as a charming and witty man in private, Bork was dour and humorless in public, and his answers seemed to play into the stereotype liberals were painting of a man who cared little for the public. When Republican Sen. Alan Simpson of Wyoming pitched a softball to Bork, asking him why he wanted to serve on the Supreme Court, the nominee replied that "it would be an intellectual feast."

TV critic Tom Shales of The Washington Post would write of the testimony: "He looked and talked like a man who would throw the book at you — and maybe the whole country."

In the end, Bork was defeated by a vote of 58 to 42, the largest margin in history.

The whole episode, however, enraged many Republicans. Bork's name became a symbol of conservative grievance, and a new verb — to "bork" — was born, defined in the Oxford English Dictionary as "to defame or vilify a person systematically."

"The nomination changed everything, maybe forever," says Tom Goldstein, publisher of the popular SCOTUSblog, which extensively covers the Supreme Court. "Republicans nominated this brilliant guy to move the law in this dramatically more conservative direction. Liberal groups turned around and blocked him precisely because of those views. Their fight legitimized scorched-earth ideological wars over nominations at the Supreme Court, and to this day both sides remain completely convinced they were right. The upshot is that we have this ridiculous system now where nominees shut up and don't say anything that might signal what they really think."

The whole experience embittered Bork and hardened his conservative positions. He resigned his lower court judgeship and soon became a popular author, speaker and culture warrior.

In his book Slouching Towards Gomorrah, he inveighed against liberals, premarital sex and working mothers. "A decline runs across our entire culture," he wrote, "and the rot is spreading."