Accessibility links
Single-Issue Solidarity Behind NRA's Clout : It's All Politics The National Rifle Association ranks among the most effective advocacy groups in America. It reaches its members almost every way imaginable — and it gets them to volunteer for campaigns and educates them on how to vote. 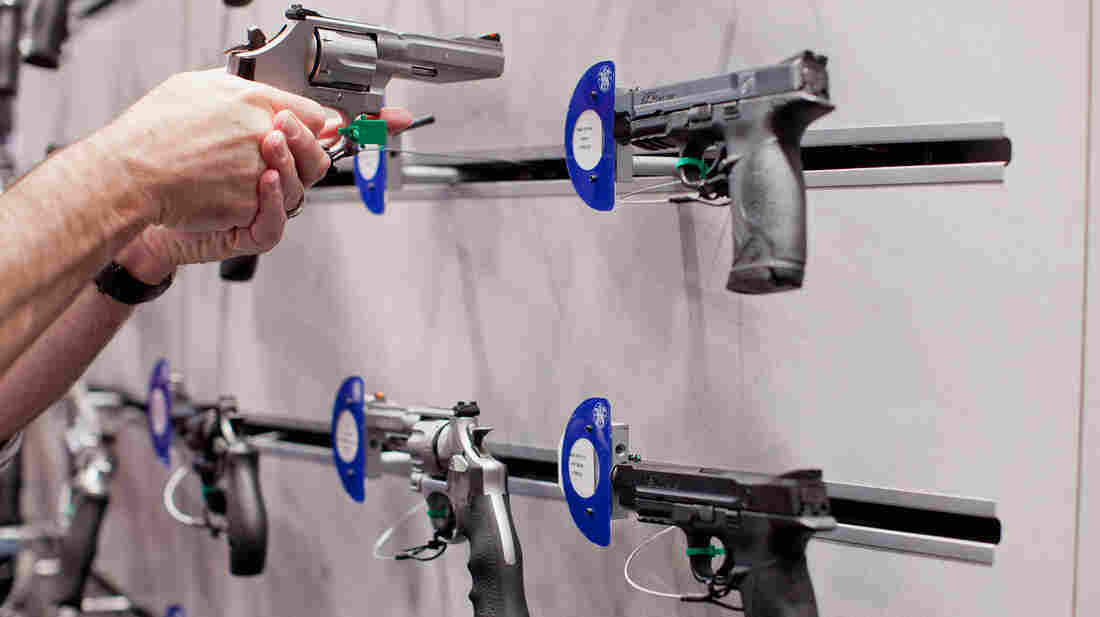 A visitor handles a revolver at a Smith & Wesson display during the NRA Annual Meetings and Exhibits on April 14 at America's Center in St. Louis, Mo. Whitney Curtis/Getty Images hide caption 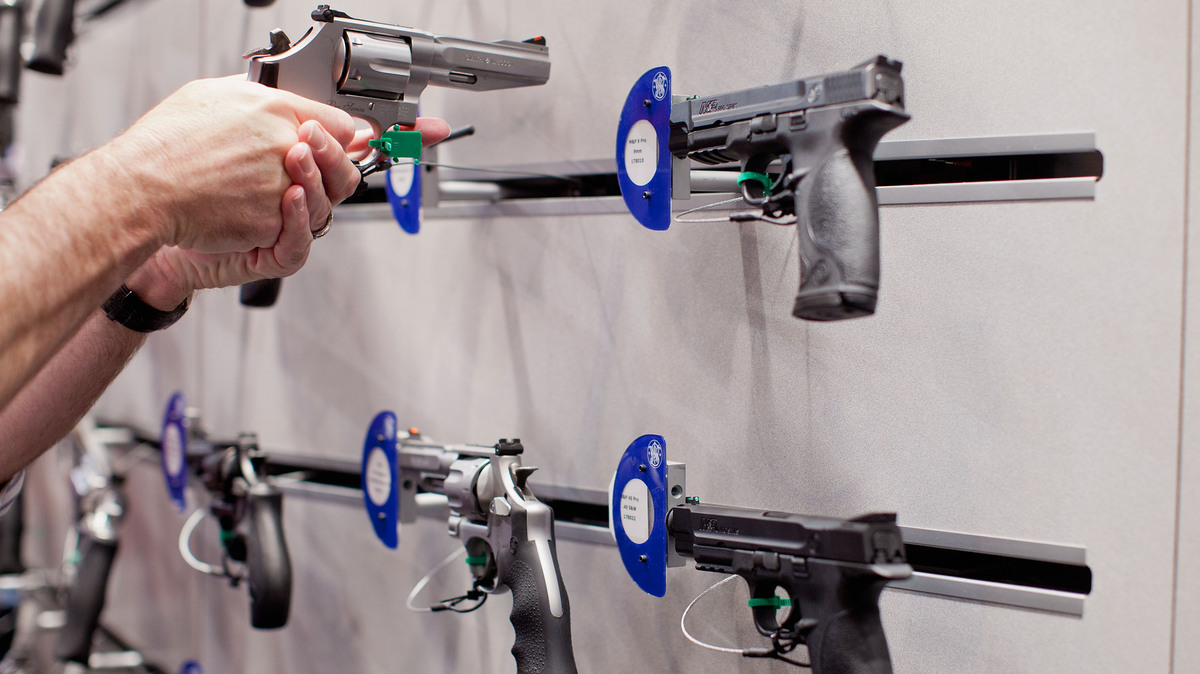 A visitor handles a revolver at a Smith & Wesson display during the NRA Annual Meetings and Exhibits on April 14 at America's Center in St. Louis, Mo.

The National Rifle Association says it will hold a major news conference Friday — a week after the school massacre in Connecticut — and that it is "prepared to offer meaningful contributions to help make sure this never happens again."

The 4 million-member organization is known in Washington as a lobbying force so powerful, it quashed any gun control debate for nearly two decades.

On Tuesday, gun control advocates gathered outside the Capitol. Next-of-kin of shooting victims formed a procession to the microphone.

"My name's Jerri Jackson, and my son Matt McQuinn was 27, and he died in the Aurora shooting on July 20," one woman said. "In addition, he saved his girlfriend." 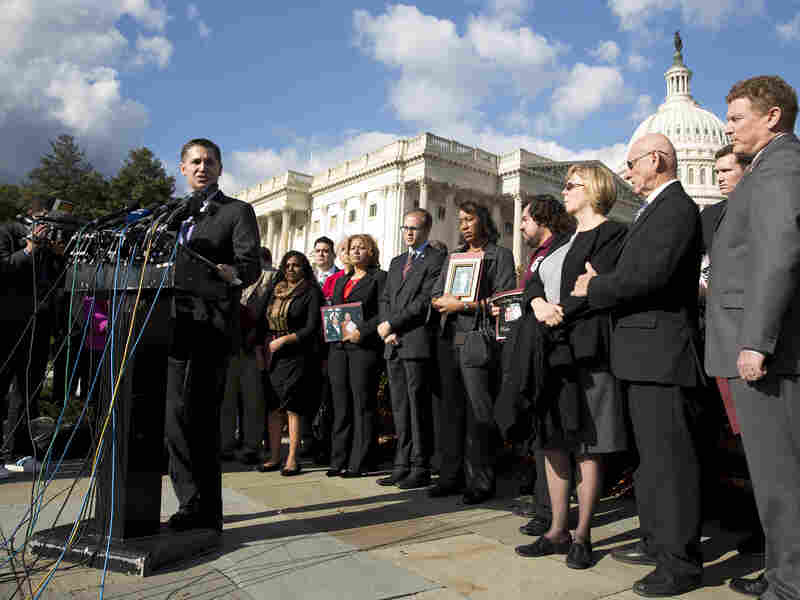 Dan Gross, president of the Brady Campaign to Prevent Gun Violence, calls on Congress to address gun violence at a news conference on Capitol Hill on Tuesday. More than 20 family members and victims of mass shootings across America joined him. Joshua Roberts/Reuters/Landov hide caption 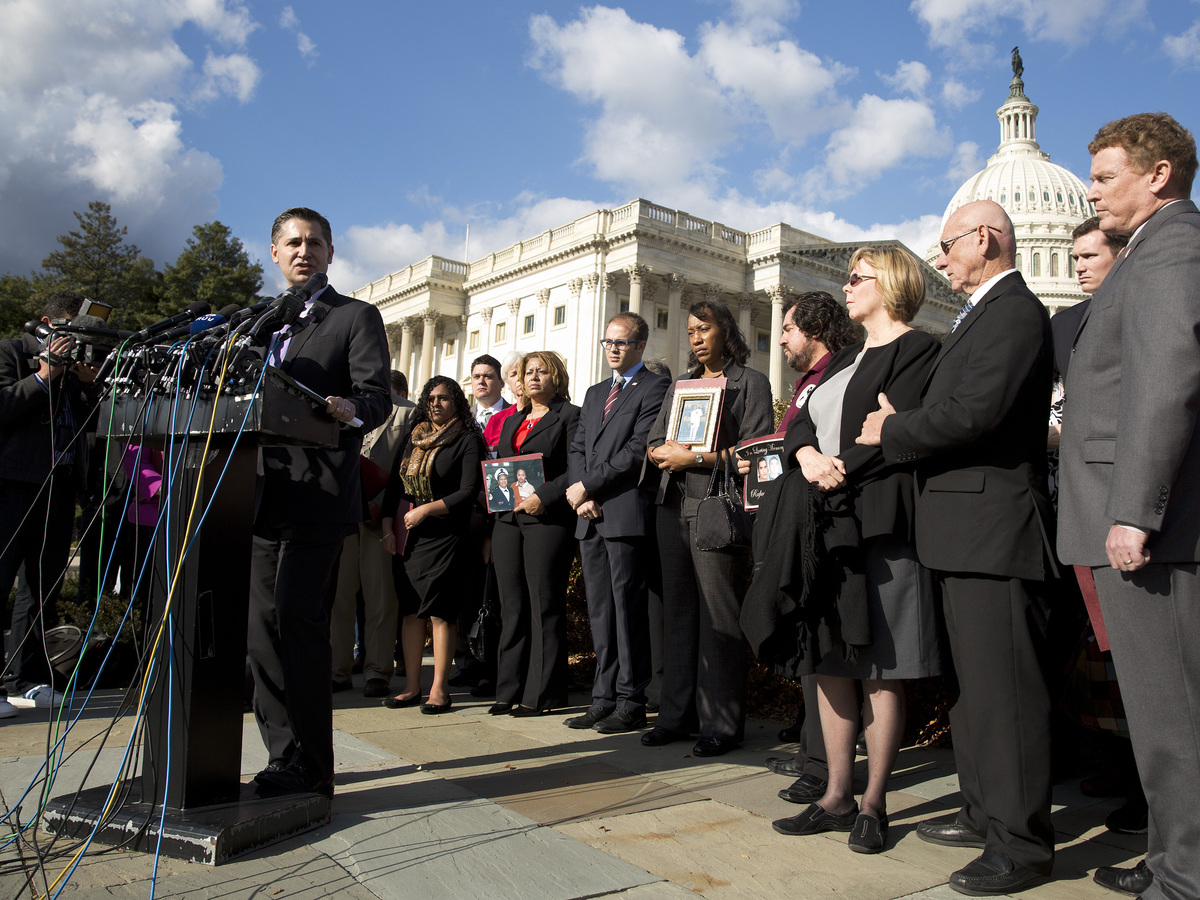 Dan Gross, president of the Brady Campaign to Prevent Gun Violence, calls on Congress to address gun violence at a news conference on Capitol Hill on Tuesday. More than 20 family members and victims of mass shootings across America joined him.

"My father was Professor G.V. Loganathan," Uma Loganathan said into the microphone. "He taught civil engineering at Virginia Tech and he was killed on April 16, 2007."

Thirty-two people died that day in a mass shooting at the university in Blacksburg, Va.

Others mentioned shootings you would probably barely remember, if at all.

The event was organized by the Brady Campaign to Prevent Gun Violence. Its president, Dan Gross, didn't attack the NRA. He simply offered an invitation "to anyone who loves to hunt, who owns guns for any lawful purpose, to join us in having this national conversation to make this the better nation that we need to be."

Gross suggested that the NRA leadership is more extreme than many of its members. But that has been a tough sell.

The NRA ranks among the most effective advocacy groups in America. It reaches its members almost every way imaginable: high-quality magazines, Web TV, gun club affiliates for local bonding, and national conventions every year — a festival of guns and those who appreciate them.

The whole thing is wrapped in patriotism.

"We're the longest-standing civil rights organization in the U.S., proud defenders of history's patriots, protectors of the Second Amendment," says one promotional video.

Nina Kasniunas, a political scientist at Goucher College in Baltimore, uses the NRA as a showcase of advocacy techniques — everything, she says, down to the swag that members get.

"When they see the T-shirt, when they see the baseball hat that says the NRA, there's kind of just like a wink and a nod — sure, you know, 'We're in this together. We are the NRA,' " she says.

And it's through that slogan — that solidarity — that the NRA gets its clout. It grades lawmakers — grades them harshly. It supplies volunteers to political campaigns. And it educates its members on how to vote — using extensive mailing lists that candidates both covet and fear.

All for a single issue: guns.

In this year's campaign, the NRA ran ads like this one: "Obama put two justices on the Supreme Court who threaten our right to self-defense. Defend freedom. Defeat Obama."

At Brigham Young University, political scientist Kelly Patterson says it is possible to give the NRA too much credit.

"Many of these members of Congress already came in predisposed to see the National Rifle Association's agenda a certain way and to be sympathetic toward it," Patterson says.

But it's also true that the NRA has more clout than liberal groups.

"If they win, that is going to cost people money," he says. "You don't have this kind of conflict on the right, when you're advancing what some people call gun rights."

The question now is whether the NRA's core issue comes with a new and different kind of cost.