Accessibility links
Often Written Off, Biden Has Long List Of Deals To His Name : It's All Politics The "fiscal cliff" wasn't the first time Vice President Joe Biden has helped carry a deal across the finish line. Though critics dismiss him as a gaffe-prone windbag, he has reached across the aisle many times to get compromises through Congress. 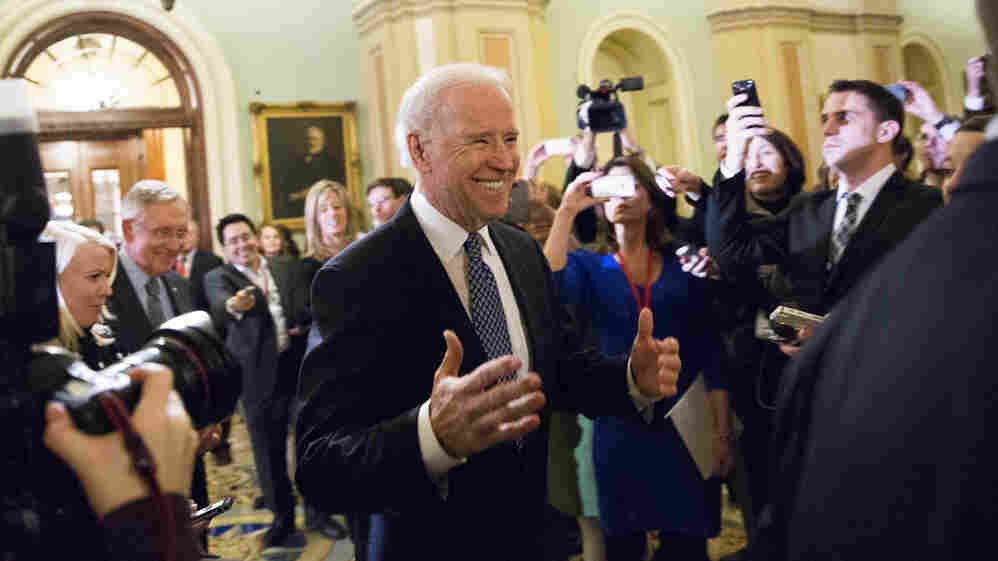 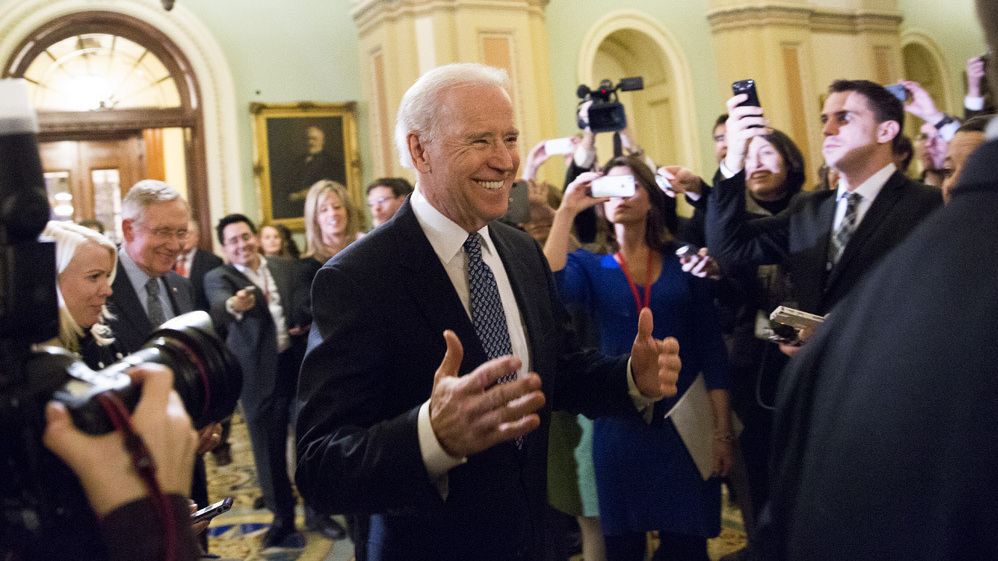 Vice President Joe Biden arrives for a closed-door meeting with Senate Democrats to urge them to support a fiscal cliff deal on Monday.

When President Obama finally announced a fiscal cliff agreement late Tuesday night, he thanked several people who had worked to get a deal.

The first one he mentioned by name was the man standing next to him at the podium: "my extraordinary vice president, Joe Biden."

In the final hours of the standoff, Republican Mitch McConnell asked Biden to help push a deal over the finish line. It was far from the first time the vice president has played that role.

In 2009, Biden's chief economist, Jared Bernstein, was in an Oval Office meeting with the president. In the middle of the meeting, Bernstein remembers, the phone rang.

"And it's Arlen Specter announcing that he's going to become a Democrat and give the Democrats the majority in the Senate," Bernstein recalls. "And the president took the call and was extremely pleased. And when he got off the phone, he said something to the effect of, 'That was Joe Biden's work.' "

The White House has an entire legislative affairs office whose only job is to keep in touch with Congress. But often, this vice president acts as a one-man shop, doing the job on his own.

Bernstein says everyone in the White House acknowledges this.

"Not only is it recognized as one of his strengths, but it's one of the reasons he's there," Bernstein says. "I mean, you're talking about a president who was in Washington and in the Senate for all of two years, and a vice president who was there for 36."

Obama has a reputation for being aloof, especially with members of Congress. He doesn't take lawmakers golfing. He doesn't invite them over for movie night. He doesn't schmooze.

Biden is just the opposite. This week, he greeted incoming senators and their families at the start of the new Congress. He gave bear hugs, workout advice and facial caresses.

That side of Biden is easy to mock. Critics dismiss him as a gaffe-prone windbag who talks more than he listens. That's what veteran Republican staffer Jack Howard had heard before he met Biden in 1994.

Howard was working for then-Rep. Newt Gingrich in the House at the time. Congress was deadlocked over a crime bill. Lawmakers were still in the office deep into what would usually have been the August recess, when Biden, then the Senate Judiciary Committee chairman, came over to help break the logjam.

"My first reaction was: Why is he coming over here to try to help this? And my experience to that point had pretty much been only what I'd seen or heard from other people, which, you know, was kind of a caricature of him," Howard says. "But all those notions were quickly dispelled within hours."

Howard says Biden was there until 2 a.m. or 3 a.m., night after night, sleeves rolled up, pushing everyone toward a deal.

"The Republican members quickly came to realize we could trust the guy," Howard says. "He was a straight shooter. He kind of knew what our limits were, and he was quite candid in terms of telling us what his limits were. ... Once you kind of get that established, that's the first real predicate to a successful negotiation."

That 1994 crime bill ultimately came through. It's one in a long series of deals from Biden's time in the Senate. He struck many of them with people who were his utter political opposite. And those relationships endured to the very end.

As former Democratic Sen. Ted Kaufman, who was Biden's chief of staff for years, recalls: "Sen. Strom Thurmond, who I think has a reputation of being one of the most conservative members in Senate history, and Jesse Helms, who probably would be in the top 10 along with Thurmond — both of those senators had asked that when they died, they'd asked Sen. Biden to be one of the people to give the eulogy at their memorial service."

With that history, Senate Minority Leader Mitch McConnell made this final overture last weekend as a fiscal cliff deal seemed to be slipping out of reach:

"The vice president and I have worked together on solutions before, and I believe we can again," McConnell said.

Sure enough, that's what happened. And it won't be the last time.

Biden's next task is to lead the administration effort on gun control — an issue where Republicans and Democrats are at least as far apart as they were on the fiscal cliff.