Accessibility links
Sinema, First Openly Bisexual Member Of Congress, Represents 'Changing Arizona' : It's All Politics Democrat Kyrsten Sinema, 36, is a former social worker who spent part of her childhood living in an abandoned gas station. To win her district, made up of almost equal parts Republicans, Democrats and independents, she had to focus on voters in the middle. 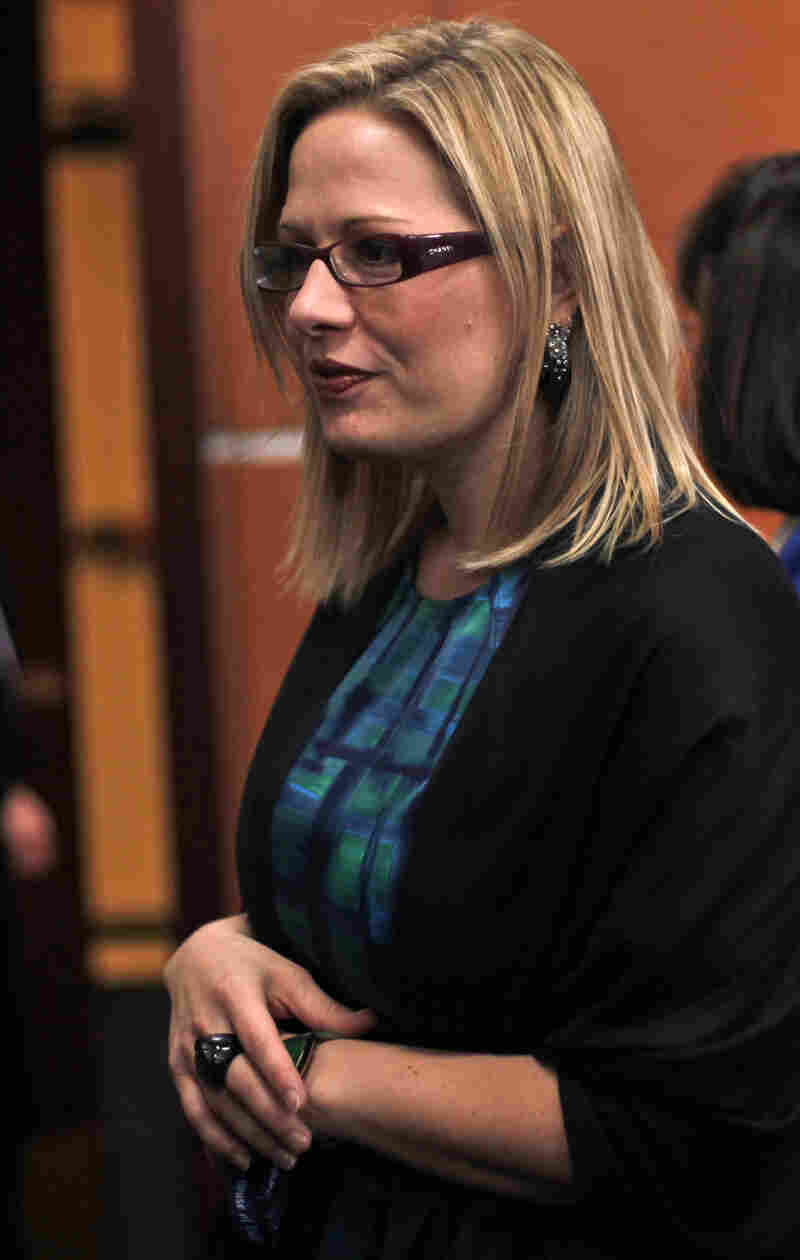 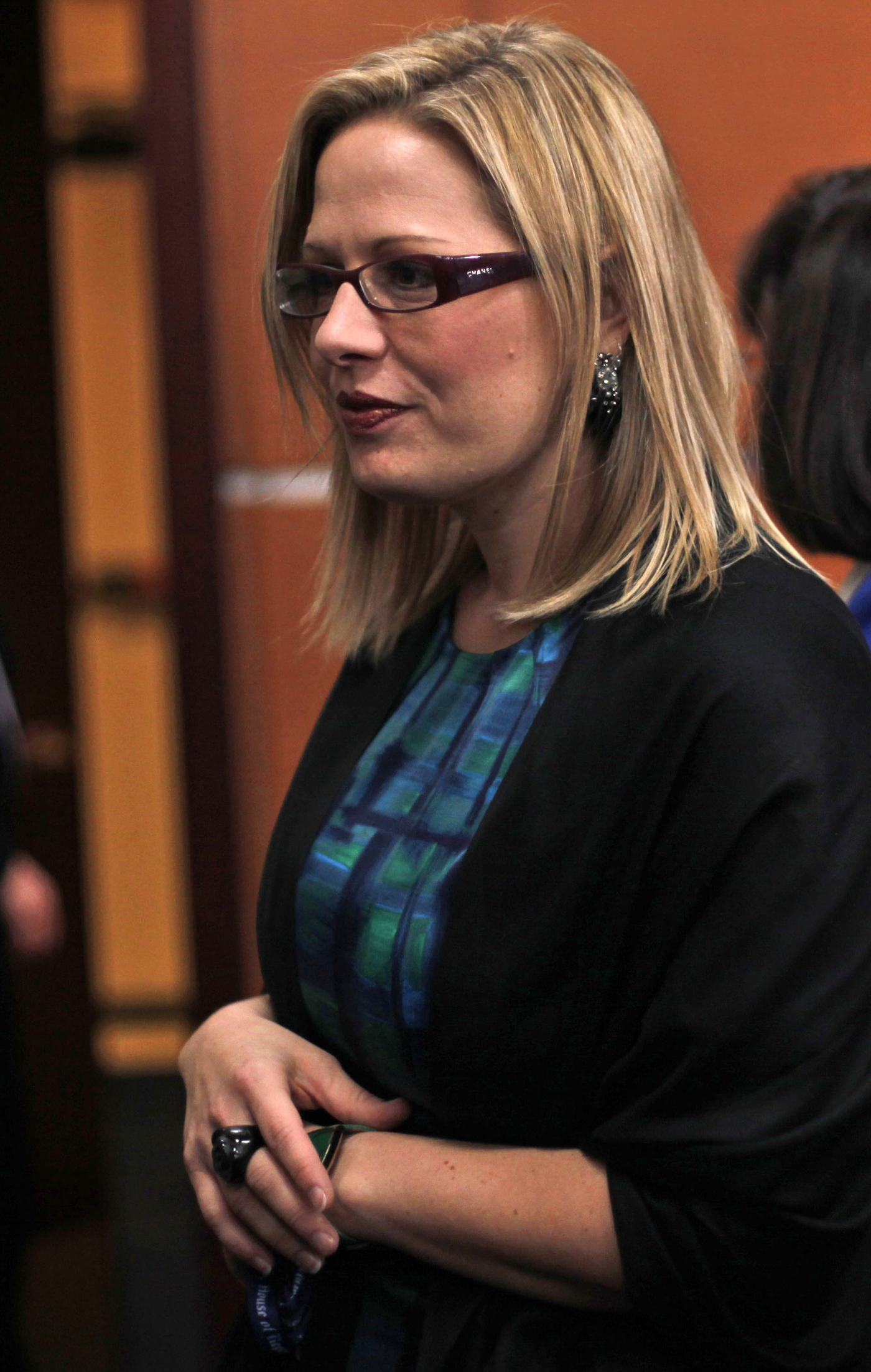 Arizona's new 9th Congressional District is sending a different type of representative to Washington this week: She's young — 36. She grew up homeless for a time. And she'll be the first openly bisexual member of Congress.

Democrat Kyrsten Sinema marvels at the number of women, minorities and members of the LGBT community who will join her in the freshman class, which will be sworn in Thursday.

"I'm just really proud of the Democratic caucus," she told voters in her district at a coffee meeting on a recent rainy winter morning. "I look around in our meetings, and I think we really look like America."

For a while it was unclear whether Sinema — a social worker who rose quickly through the state Legislature — would make it to Congress. It took nearly a week after Election Day for Sinema to learn she had beaten her Tea Party opponent by 10,000 votes.

"How often can you say a kid who was homeless is going to Congress?" she says.

Sinema grew up in a Mormon family. Although she's no longer affiliated with any religion, she says her family's conservative roots helped launch her career. Amid recession in the 1980s, her parents divorced. When the bank foreclosed on their home, Sinema moved into an abandoned gas station with her mom and stepfather. She says for two years they had no toilet or electricity.

"I kind of grew up with a mix of two things," she says. "One was kind of this individual work ethic that my father and my stepfather and my mother all taught me, which was never depend on anyone else to do things for you, and work really hard on your own."

Not Your Father's (Or Mother's) Congress

And Sinema did work hard. She graduated from college at 18. She got a job as a social worker, then got a law degree. In 2004, she ran for the state Legislature and won. This year, she threw in a doctorate for good measure.

"At the same time, I benefited from the help of church and family and government my whole life," she says.

Democratic Sen. David Lujan, a colleague of Sinema's in the state Legislature, says he had "no doubt she would be in Congress someday."

Lujan says she was the smartest person in the state Capitol — and the hardest-working. "There were a lot of people that were jealous of her," he says. "And I saw that on both sides of the aisle."

Early on, Sinema formed a reputation as an outspoken advocate for women's rights and same-sex marriage. But Lujan says she also learned to moderate her tone and found Republicans to co-sponsor her bills. Even critics say they respect Sinema's charm and political skill.

"She created this transformation ... going from one of the most left-wing leftists of the state House into one of the more moderate Democrats in the state Senate — which was a facade," he says.

And perhaps shrewd. Her district is made up of almost equal parts Republicans, Democrats and independents. GOP political analyst Kris Mayes says to win, Sinema had to seek the middle.

"It is representative of a changing Arizona — such that you are going to see a much more diverse cast of characters go to Congress from Arizona than ever before," Mayes says.

Back at the coffee shop, Sinema wraps up an hourlong chat with supporters that ranged from immigration reform to access to education.

When asked why the public seems to be fascinated with her, Sinema says: "I speak my mind. I'm not really afraid of things. I actually don't think that's that unusual. And I think it's not a surprise here in Arizona."

The real surprise may come later. Will Sinema continue a path of moderation? Or will this new-generation congresswoman end up too liberal for Arizona voters?