Accessibility links
What 'Lincoln' Says About Today's Congress : It's All Politics The anti-slavery movie has picked up a dozen Oscar nominations. Its resonance may stem partly from the way in which it shows politicians working out a deal on a tough issue — something many Americans ardently wish for today.

What 'Lincoln' Says About Today's Congress

What 'Lincoln' Says About Today's Congress 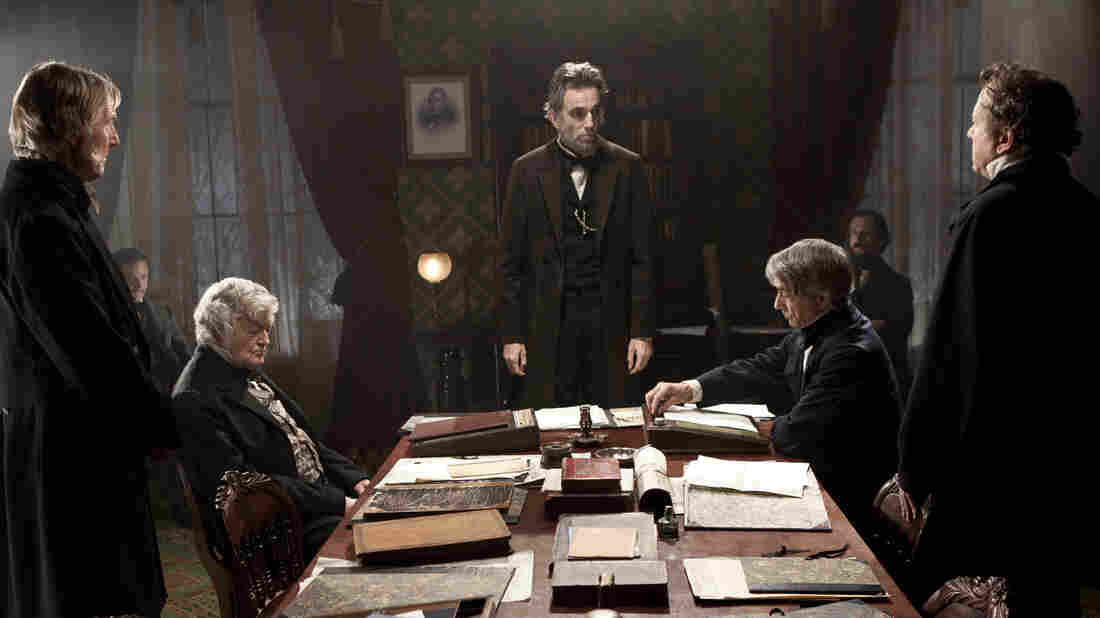 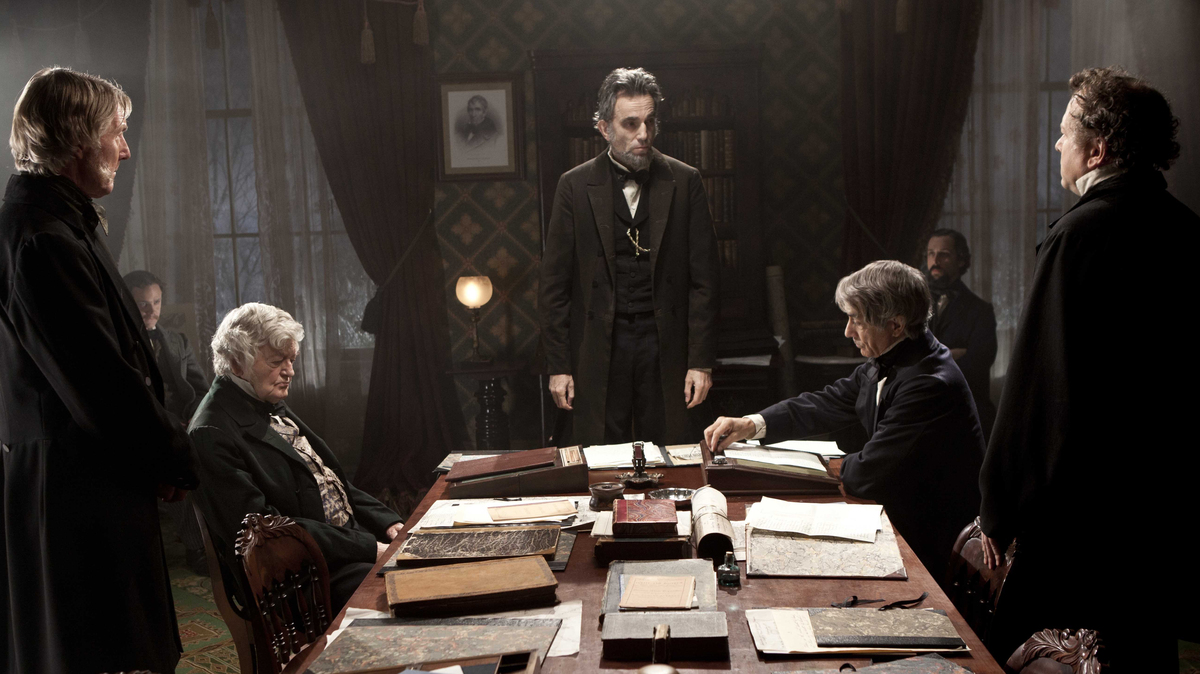 Daniel Day-Lewis (center) portrays Abraham Lincoln in the film Lincoln, which might leave audiences feeling a little more hopeful about the state of today's Congress.

Lincoln may not be a political film for the ages, but it's certainly a movie that speaks to our own time.

Although the movie centers on the abolition of slavery, Lincoln taps into one of the deepest desires of our historical moment — the desire for politicians in Washington to get their acts together and compromise to succeed in passing major legislation.

"People like the idea of the system working," says John Powers, a critic for Vogue and NPR's Fresh Air. "In terms of the public fantasy, it's the perfect one for the Obama age because you have this tall, principled guy dealing with all these crazies who all come together to get important things done."

Lincoln was garlanded with 12 Oscar nominations on Thursday, including best picture. Daniel Day-Lewis was nominated for his portrayal of President Abraham Lincoln, as was Steven Spielberg for his direction.

The movie hasn't been a smash hit, but it's taken in $145 million at U.S. box offices — not bad for a talky, mostly interior historical epic.

In 'Django' And 'Lincoln,' Two Very Different Takes On America's Racial Past

Film historian David Thomson suggests the reason the film has resonated with the public and politicians themselves — with separate screenings held at the House, Senate and White House — is ultimately due to its message of pragmatic problem-solving.

"I think the reason why the reason the film is doing so well, I think the reason why it will be voted best picture by the Academy, is that that coincides with our sense, our plea almost, that the people who are hired and paid as our governors [should] compromise, make a deal," Thomson said recently on KQED's Forum. "Know that you're never going to get everything you want, but we can work something out."

When historians want to calm people down about how bitter the partisan polarization of our own time has gotten, they almost invariably refer to the 1856 incident in which Rep. Preston Brooks beat Sen. Charles Sumner on the Senate floor following a speech about slavery.

Today's politicians may not be wholly cooperating, but things are not so bad as that.

Lincoln does not downplay the enormous divisions caused by slavery, but it doesn't focus on them, either. Instead, it's an end-of-war film that looks narrowly at the question of whether the nearly victorious North can find the will to abolish slavery permanently.

"They're at a point where they understand there's really no going back," says Civil War historian and blogger Kevin M. Levin. "It only works because Spielberg is able to take a very narrow snapshot of this broader process of emancipation that takes place throughout the war."

The film might have been more complicated had it been set earlier, when Lincoln himself was not as readily convinced that an abolitionist amendment was the way to go. Instead, Lincoln is able to present the argument as a relatively simple one — the holdouts are racists — confident that no one watching the movie in 2012 or 2013 will have any doubt about the virtue of abolishing slavery. 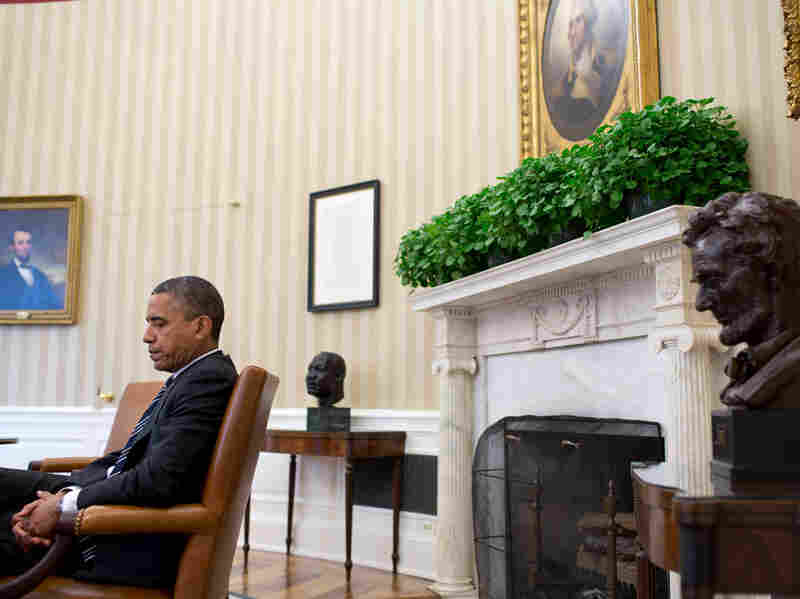 President Obama is seen during a September meeting at the White House, juxtaposed with the paintings of Abraham Lincoln and George Washington, busts of Martin Luther King Jr. and Abraham Lincoln, and the Emancipation Proclamation. Pete Souza/White House hide caption

"They're accomplishing something that we now, in the present, think is so obviously right to do," says Northwestern University historian Kate Masur, author of a well-regarded book about emancipation.

"By putting abolition of slavery at the center of it, they can show that Congress can do something that really needs to be done," she says.

As the audience roots for Congress to abolish slavery, moviegoers might be left feeling a little more optimistic that present-day politicians can tackle divisive issues.

We'd all like to believe there are solutions regarding gun control, climate change and immigration that will seem as obvious 150 years from now as abolishing slavery does today. Of course, the problem is Americans hold equal and opposing views about what those might be.

"One of the reasons it works and resonates with Americans today is that they do see gridlock around now, but with a little backroom dealing, that Congress is able to pass the amendment," Levin says.

The movie in this way offers an implicit criticism of Obama, says Powers, the Vogue critic. By showing Lincoln as an arm-twister along the lines of a President Lyndon B. Johnson, it makes him look less like a plaster saint and more like a hugely successful practical politician.

By contrast, Villanova University political scientist Lara Brown says of President Obama, "We have a president who really doesn't like the dirtiness of politics."

Referring to the recent fiscal package negotiated by Vice President Joe Biden, she says, "Obama signs off on the deals that other people get done."

While that might be unfair, it's true that at various points in his presidency, Obama has preferred to take his case directly to the American people, seeking to put pressure on Congress from outside.

This is in keeping with the usual portrayal of politicians in American film, Brown says. The bad guys are always the corrupt politicians who are entrenched in the system. The hero finds some way to rise above the mud and win over the American people.

Lincoln illustrates nothing so much as how much the president needs Congress to carry out important ideas.

"Lincoln is a hero for mastering the system," Brown says. "That's a completely opposite paradigm from what our usual fantasy is, in terms of Hollywood."

The Triumph Of Compromise

Although the film is about a House vote in which the president has no formal part — he plays with his son while it's going on — all the members of Congress have to come around to something like Lincoln's point of view, from the left or from the right.

As Masur points out, when Rep. Thaddeus Stevens (played by Tommy Lee Jones, who is also up for an Oscar) renounces his ardent support for full equality for blacks in order to help ease passage of the amendment, "it's a triumph of compromise."

By showing how strong leadership can lead to a pragmatic result following a messy debate, the movie satisfies contemporary desires of those looking for politicians who can achieve results rather than remaining unyielding on the key issues of the day.

"Maybe it's closer to showing how crazy the whole process is and having it still work," Powers says. "So it's hopeful in a new kind of way."