Accessibility links
Estimated Costs Drive Debate As Florida Weighs Medicaid Expansion : It's All Politics Gov. Rick Scott says he's concerned about how much expanding Medicaid under the Affordable Care Act would cost. But after he was charged with exaggerating, his administration released a new study with much lower estimates. 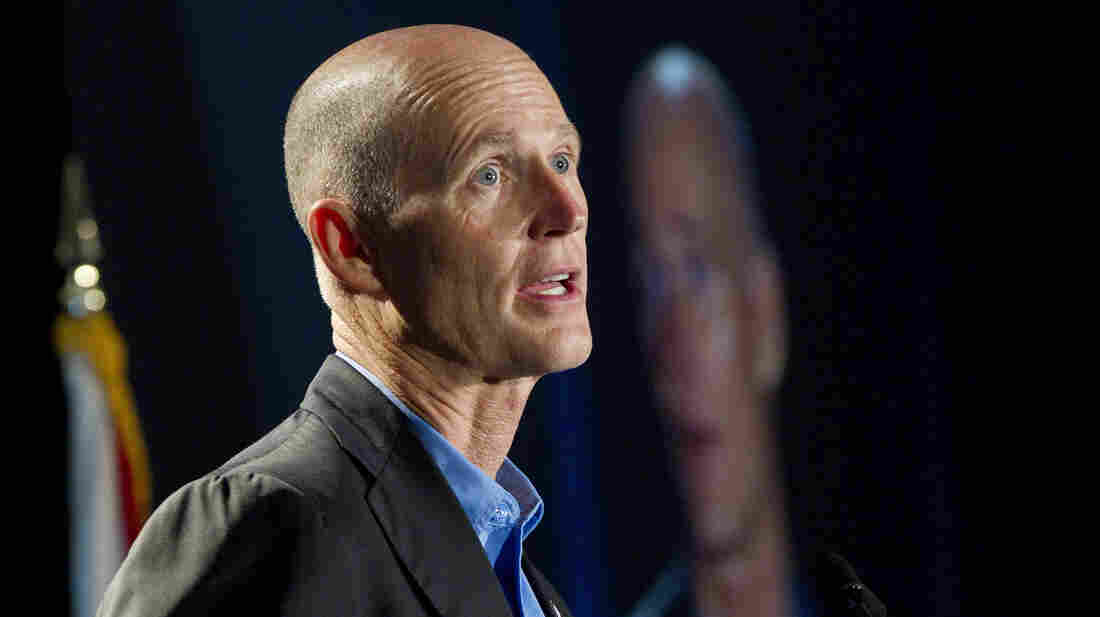 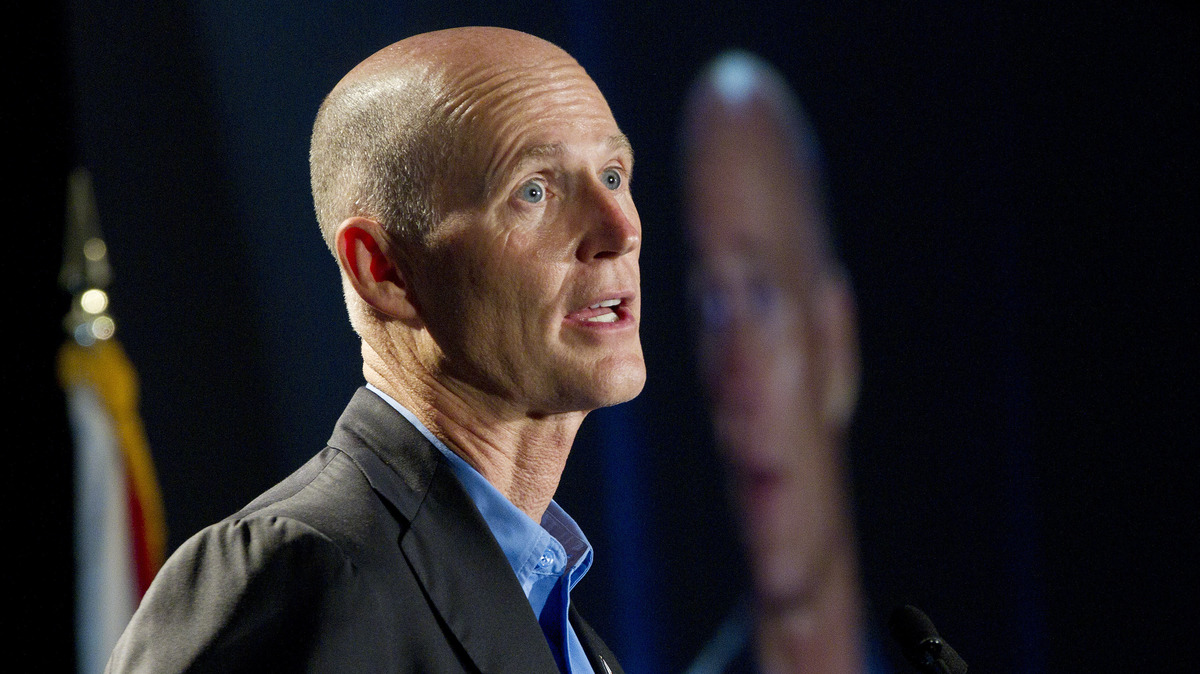 Florida Gov. Rick Scott speaks in Fort Lauderdale in May.

Florida and several other states are wrestling with a decision: whether to expand Medicaid.

When the Supreme Court upheld the Affordable Care Act last year, the court said states could opt out of that part of the law. But it's key. It would provide coverage to millions of low-income Americans who currently have no health insurance.

Florida Gov. Rick Scott says he's concerned about how much expanding Medicaid would cost. But others charge the governor is exaggerating.

No governor fought harder against the Affordable Care Act than Scott. With President Obama's re-election, Scott says he now accepts that it is "the law of the land."

But in an interview this week with a Jacksonville TV station, Scott talked about the area that still troubles him: Medicaid expansion.

"Once you put somebody in a program, you can't undo it," he said.

Under the Affordable Care Act, more than 21 million people across the country currently without insurance could be covered by Medicaid. They "could" because the Supreme Court ruled that for states, expanding Medicaid is optional.

The Obama administration worked to make it an attractive option. Under the law, the federal government would pick up the entire cost of insuring new Medicaid recipients for the first three years and 90 percent of the costs after that.

Despite that, some states, like Texas, say they have no plans to expand Medicaid. That's also been Scott's position in Florida. He says that's because of its potential impact on the state's budget.

"The Florida Agency for Health Care Administration put out a report that said it's going to cost $26 billion over 10 years. There's going to be other studies. It's all tied to what assumptions you have," he says. "But here's what we know: It's not free."

But that estimate appears to be greatly inflated. Since the Scott administration first released those numbers last month, they have been panned by health care analysts and economists for ignoring the new, larger share of Medicaid costs being picked up under the Affordable Care Act by the federal government.

The governor's numbers are at least four times higher than estimates compiled by independent health care analysts and the Florida Legislature.

Karen Woodall, who heads the Florida Center for Fiscal and Economic Policy, says that rather than costing the state $26 billion, some independent estimates show Medicaid expansion may actually help Florida save money.

"And that's because they are calculating the cost benefit of expansion of Medicaid in that we would be saving money that wouldn't have to be spent taking care of people who don't have insurance," she says.

According to a report this week in Health News Florida, Republicans in the state Legislature last month alerted Scott's staff that his Medicaid expansion numbers were faulty. But Scott continued to use them, even in a meeting this week with Health and Human Services Secretary Kathleen Sebelius.

"To me, it suggests that the governor's not having an honest conversation — not only with the folks who are going to depend on the Affordable Care Act, but also with major officials in Washington, D.C.," he says.

At first, Scott's office stood by his numbers, saying they were one of a set of different cost estimates he would consider going forward. But on Wednesday, the Republican chairman of Florida's House Appropriations Committee joined the criticism. A few hours later, the Scott administration released a new study that downgraded the cost of expanding Medicaid to $3 billion over 10 years — only about one-tenth of his original estimate.

Ultimately, the decision about expanding Medicaid may be made, not by Scott, but the state Legislature. Florida's House and Senate have set up special committees to begin working on the issue.

Woodall says Medicaid expansion would bring $20 billion in federal health care funds to Florida over the next decade — a cash infusion that would help the economy, especially small businesses that rely on low-wage workers.

"So I think, ultimately, the Legislature is going to see that this is a benefit to Florida and they'll move forward with it," she says.

Scott's decision then would be whether to sign it.