Accessibility links
For Young Republican, Defying Boehner In Washington Plays Well Back Home : It's All Politics After trying to help remove fellow Republican John Boehner as House speaker, Rep. Justin Amash got a very warm reception upon returning to his Michigan district. For a conservative Republican from a conservative district, being labeled a Washington troublemaker is not necessarily a bad thing. 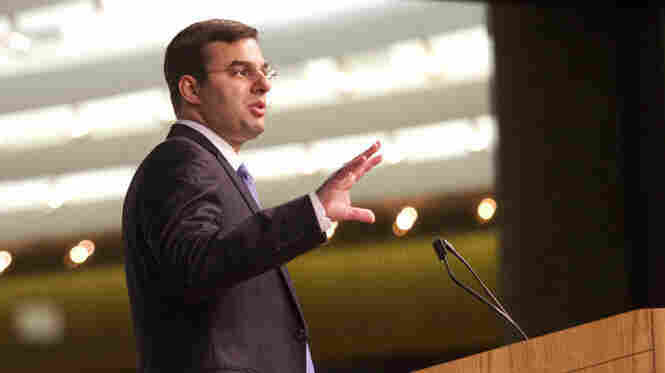 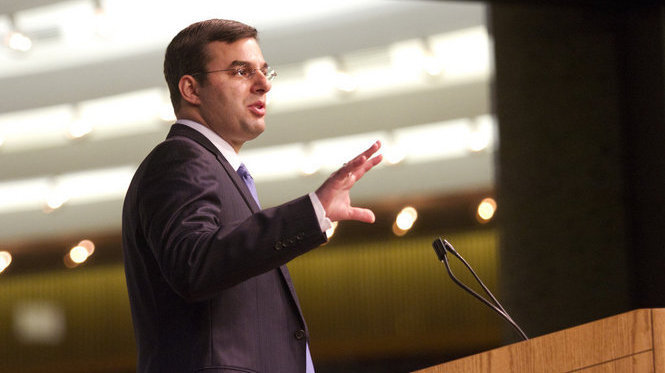 When the rumored rebellion against House Speaker John Boehner's bid for a second term played out last week, the very first Republican to not vote for Boehner was Rep. Justin Amash, R-Mich., just three names into the alphabetical roll call.

The revolt failed, with fewer than a dozen House Republicans following Amash's lead. Now, the 32-year-old second-term congressman is back in his Grand Rapids-based district for the first time since that drama. And he's finding that being a Washington gadfly can be a plus back home.

On Wednesday night, Amash took questions at a town hall meeting at the Gerald R. Ford Presidential Museum, a place that honors the presidency and long congressional career of a consummate party loyalist and legislative consensus builder.

Amash, born three years after Ford left the White House, is taking a different path — bucking the GOP leadership on issue after issue, including last week's challenge to Boehner's re-election as speaker.

A crowd of about 175 people turned out for the town hall in downtown Grand Rapids.

"It's been a very eventful last month or two in Congress, to say the least," Amash said, alluding to his newfound notoriety. "Even I'm sick of seeing myself in the paper."

But the very warm reception was also a reminder that for a conservative Republican elected from a conservative district, being labeled a troublemaker by the establishment is not necessarily bad politics back home.

Amash said his two main goals as a congressman are to get a handle on spending and to bring transparency to the process. He says Americans need to better understand how Washington works and what Congress does to begin to fix things. Republican House Speaker John Boehner administers the oath of office to Amash during a mock swearing-in ceremony on Jan. 5, 2011, at the start of Amash's first term. Jacquelyn Martin/AP hide caption 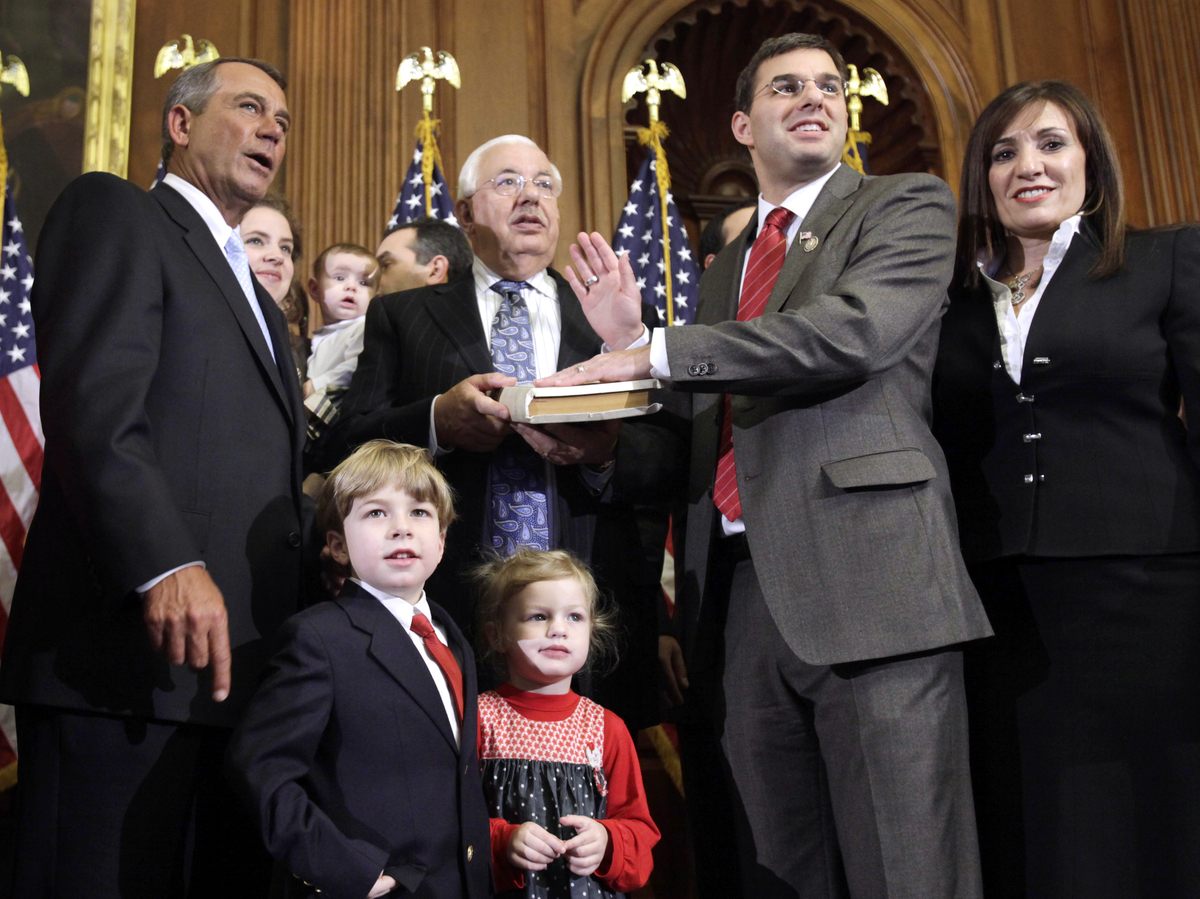 Republican House Speaker John Boehner administers the oath of office to Amash during a mock swearing-in ceremony on Jan. 5, 2011, at the start of Amash's first term.

"There's a system in Washington, D.C., that is not right. And it's not because people are Republican or Democrat. The whole thing is broken," said Amash, who has garnered attention for using Facebook to explain each of his House votes.

Wednesday night, he was also again critical of the deal to address the so-called fiscal cliff. He was a no vote, citing the lack of any serious attention to spending cuts.

Amash is a Tea Party favorite, though he describes himself as a libertarian. Both groups were well-represented at the town hall. And there was plenty of ire directed at Washington in general.

There was this question about President Obama: "You've been great in standing up in what you can do, but is there nobody in this Congress [that's] got the guts to deal with this guy?" a woman asked. "He's scaring me to death."

Amash replied: "I'm not a fan of President Obama, but I also want to reiterate what I said before, which is, 'If we think that the problem is President Obama then we have missed the point.' "

That kind of response does set Amash apart from a large portion of the Tea Party, which applauds the way he's stood up to Boehner, the Ohio Republican.

Amash is one of four Republicans stripped of key committee assignments in the new Congress, a move seen as punishment for insufficient loyalty to Boehner and the GOP leadership.

Amash lost his seat on the Budget Committee. That prompted the toughest question he got at the town hall, from college senior Zack Sikkema: "I'm very confused as how getting kicked off the Budget Committee and then voting against leadership, whether they're right or wrong, helps us as your constituents when you serve us."

Amash responded: "At the end of the day, the kind of, where you go along with everyone just to get along politics, it doesn't really do much for the American people. It doesn't do much for you as my constituents — the people I'm representing."

Amash and the other Republican caucus rebels seem certain to remain a thorn in Boehner's side. David Rohde, a congressional scholar at Duke University, says it's a product of the very slim majority (233 to 200 currently) that Republicans hold in the House.

"It just shows there is a group that is prepared to withhold their support from Boehner's initiatives in specific circumstances. So when he's trying to organize procedural devices on specific issues as they go down the line, like the debt ceiling for example, he may not have the votes among Republicans to do it," says Rohde.

Amash rejects any suggestion that his relationship with Boehner is a problem for him or for his district. He also makes it clear that he and the others who voted against Boehner last week will be watching him closely in the coming months as new battles over the debt ceiling and automatic spending cuts approach.