Accessibility links
What Now? Obama Leads Polarized Government Into Second Term : It's All Politics Unlike with his first swearing-in, Barack Obama does not face two ongoing wars and an economy on the verge of collapse. But thorny issues remain, and there's less hope than there was four years ago that Obama can bend Washington to his will. 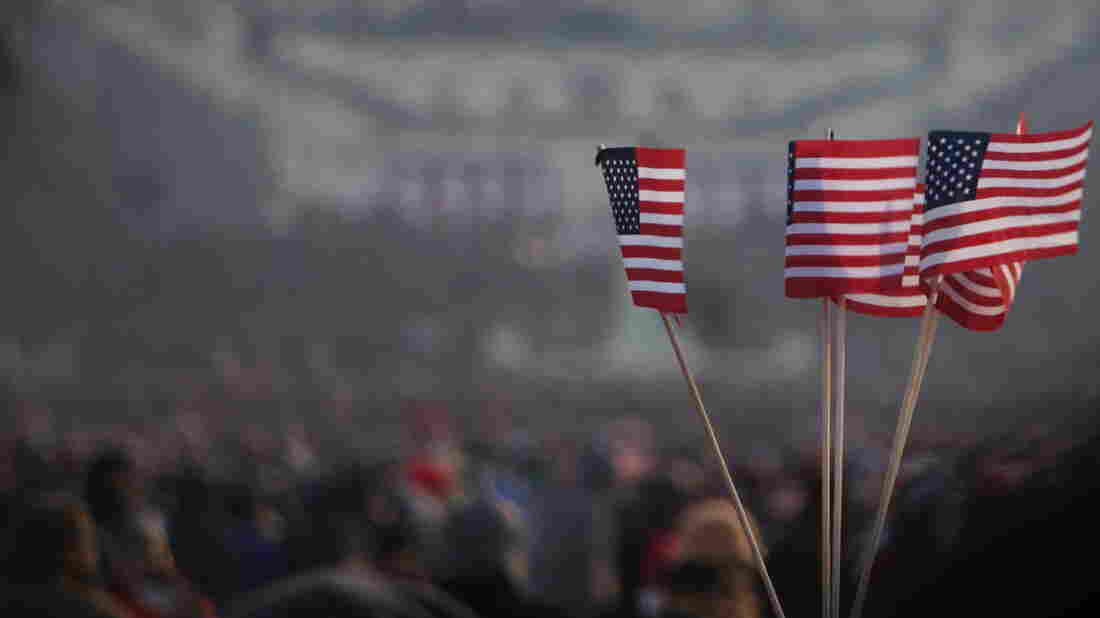 As a second-term president, Barack Obama necessarily generates less excitement than he did as a newcomer. Above, flags flew during his 2009 inauguration. Eric Purcell/FlickrVision via Getty Images hide caption

Feelings of hope and change have mostly faded.

The country is in better shape than it was when Barack Obama became president four years ago. The economy is no longer in free fall, and the nation has for the most part extricated itself from seemingly endless wars abroad.

Yet as Obama prepares to enter his second term, there seems to be less optimism about his ability to address the nation's problems than was the case when he first entered the White House. 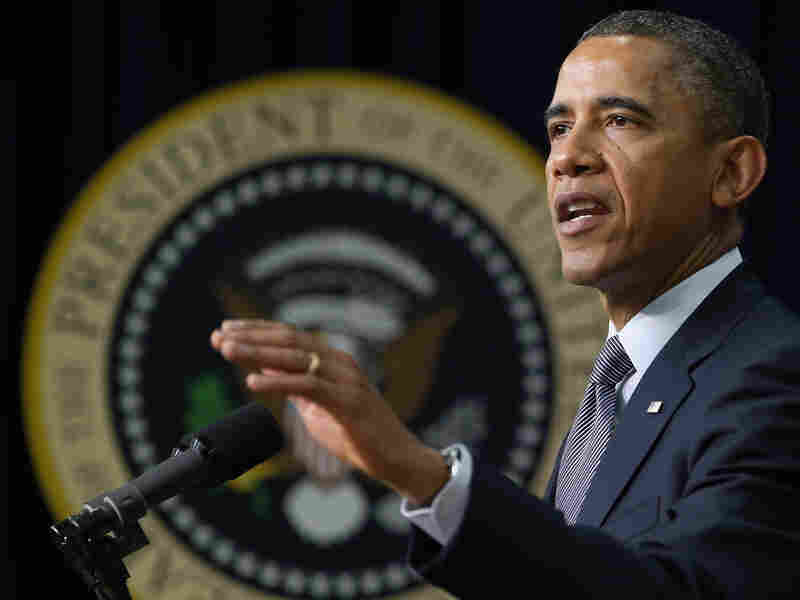 "There's an immense amount for him [President Obama] to do just to secure the legacy of the first term," says Paul Glastris, editor-in-chief of The Washington Monthly. Chip Somodevilla/Getty Images hide caption

A lot of that has to do with rancorous relations with Congress. Obama scored huge legislative victories during his first two years in office, but since Republicans took control of the House in 2010, he's been lucky just to avoid fiscal calamity through last-minute deals.

"We just had an election that gave us the status quo," says Gary Jacobson, a political scientist at the University of California, San Diego. "If you didn't like the last two years, then the next four don't look so attractive."

Not only does Obama face continuing GOP opposition in Congress, but as a second-term president, he necessarily generates less excitement than he did as a newcomer — particularly as someone who made history as the nation's first African-American president.

"The excitement you always get in Washington when there's change is not there," says William Schneider, a senior fellow at Third Way, a centrist think tank. "This was a vote for continuity."

About a week ago, Gallup released a poll asking Americans what they felt was the most important problem facing the country. "Dissatisfaction with government" was the third-most-mentioned problem, at 18 percent, behind the economy and the federal budget deficit.

It was the most worried that Americans have been about government since Watergate, according to Gallup.

"The dissatisfaction with Washington is pretty intense right now," says Karlyn Bowman, a polling expert at the conservative American Enterprise Institute. "The mood about the way this city is working is so grim."

In the coming months, Obama faces fresh fights with Congress about the debt ceiling and spending cuts. Republicans won't be inclined to give him much of what he wants.

"In many ways, polarization is even worse than it was before — and it was bad then," says George Edwards, a visiting political scientist at Oxford University. "Republicans truly hate him, so the idea of getting cooperation is a long shot."

Obama also will seek to break the years-old logjam over immigration policy, and there are some indications that Republicans will want to make a deal on this issue. The GOP, however, is unlikely to embrace the package of gun control measures the president recently outlined.

"People who voted for the House majority have no stake in Obama's success," says Jacobson, the UC San Diego professor. "The guys that got elected to the House don't have to adapt to the changing world."

President Obama was sketchy about outlining his second-term agenda during the campaign but nonetheless faces a full plate.

Fiscal Issues: Obama and Congress must come to terms about spending cuts, the debt ceiling and funding government operations for the rest of the fiscal year. The upcoming debates may or may not lead to deals to address longer-term debt problems.

Gun Control: The president has made clear his intention to fight hard for restrictions on guns, notably bans on assault-style weapons and large-capacity magazines. He signed 23 executive orders related to guns on Wednesday but faces an uphill climb on his legislative proposals, although further background checks on purchasers has considerable support.

Immigration: Obama has reasons for optimism about resolving a thorny issue, with some Republicans more open to compromise on an idea with increased political resonance. A plan outlined recently by GOP Sen. Marco Rubio of Florida, in fact, resembles in broad outlines some of Obama's proposals. But reaching agreement on any deal that allows a path to legal status for undocumented immigrants will be difficult.

Health Care: The bulk of the Affordable Care Act will be implemented over the coming year. The Obama administration has offered more time for states to set up exchanges, which are the main marketplaces for private insurance under the law, in hopes more of them will get onboard.

Foreign Affairs: Obama is winding down the U.S. military presence in Afghanistan. His challenge now is how to respond to Iran's nuclear ambitions, repression in Syria and Islamist insurgents in Mali without committing U.S. ground troops in great numbers.

What's changing is the nature of the American electorate. As has been widely noted, Obama has benefited from a coalition that includes Hispanics, blacks, college-educated whites, single women and people with no church affiliation.

"He brought the new America to power," Schneider says. "He brought them to power and they protected him against a counterrevolution, which was the Tea Party."

Obama may have defeated the Tea Party, but he hasn't wholly vanquished it. He'll continue to face considerable opposition on issues such as tax increases and gun control.

What Obama Can Achieve

Like a lot of presidents seeking a second term, Obama was not "overly specific" about what he intends to do, Edwards says.

He adds: "The only thing Obama did say was that he wants higher taxes for the wealthy. That's been done. Before he even took the oath of office a second time, he's expended that."

The president might not rack up a string of policy victories to match his first two years in office, when he pushed through major legislation concerning health care and financial regulation, as well as an $800 billion stimulus package that not only lifted the country out of an economic canyon, but reshaped policy in areas such as energy and education. Still, implementing "Obamacare" alone will keep the president busy.

"There's an immense amount for him to do just to secure the legacy of the first term," says Paul Glastris, editor-in-chief of The Washington Monthly. "Everything he does over the next four years on health care will really do more to determine our fiscal situation — because it's really all driven by health care costs — than anything else he might do."

Fears About The Economy

Glastris says the media is too quick to gauge presidential success by simply looking through the "narrow prism" of legislative accomplishments. Presidents have enormous power to reshape the government's role in society not just through new bills, but through the annual budget process that determines the size and ambition of existing programs.

The economy almost certainly will look better at the end of Obama's term than when he first took office. Already, polls indicate that the public believes its own economic fortunes and those of the country as a whole look brighter than they did four years ago.

"Not since Roosevelt in 1933 has an incoming U.S. president faced a tougher economic challenge than Barack Obama," the economics editor of The Guardian wrote in 2008, expressing a sentiment common at the time.

There is still, however, a great deal of nervousness. Obama talks about preserving and protecting the middle class, but like any politician, he faces questions about finding sources of good jobs and growth in a globalizing economy.

Americans are worried about income inequality as well as the fact that middle-class wages have largely stagnated over the past 30 years, relative to productivity, while lower-class wages have declined, says Rajan Menon, a political scientist at City College of New York.

"There's this general sense that you work hard and do less well, and there's data to back that up," he says.

That's fueled the sense that the U.S. should avoid foreign entanglements that represent multiyear commitments in terms of both treasure and human costs, Menon argues.

It's also contributed to the extreme wariness in which Americans regard Washington when it comes to domestic matters. Obama's approval ratings are higher than those of Congress, which struggles to stay in double digits.

The country's strengths remain evident, with an economy and demographic future that look brighter than Europe's, less corruption and pollution than China, and governmental institutions that, no matter how hobbled they may appear at the moment, function better than India's.

Although the challenges Obama faces aren't as great as they were four years ago, the hope that he can address them successfully is much diminished.

"I was certainly more optimistic four years ago than I am now," says Robert Smith, a political scientist at San Francisco State University and author of a forthcoming book comparing Obama and President John F. Kennedy.

"That was misplaced," Smith says. "I had not realized at that time the extent to which the ideological and partisan polarization would actually lead the Republican Party to oppose virtually everything the president would propose."