Accessibility links
5 Questions About The Inauguration : It's All Politics Who pays for this quadrennial party? When does Beyoncé sing? If I'm going to the National Mall, how do I find a bathroom? And beyond the oath, what's the point of the whole thing, anyway?

5 Questions About The Inauguration

5 Questions About The Inauguration 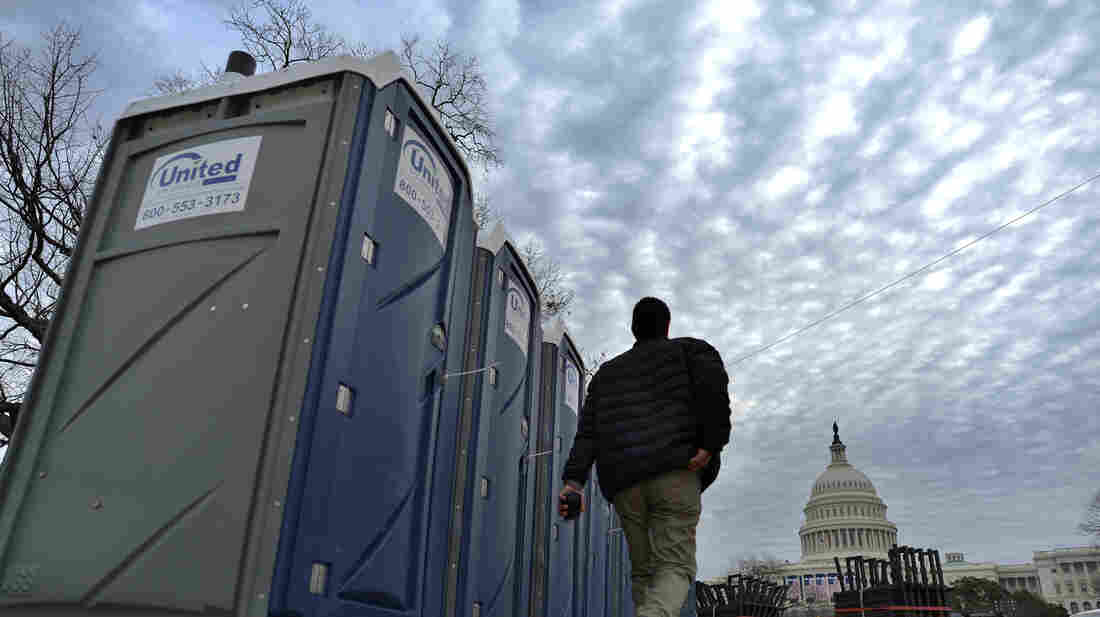 Portable toilets are installed around the U.S. Capitol in preparation for Monday's inauguration. A new app this year will help the crowd follow the event — and even find the closest port-a-potty. Jewel Samad/AFP/Getty Images hide caption 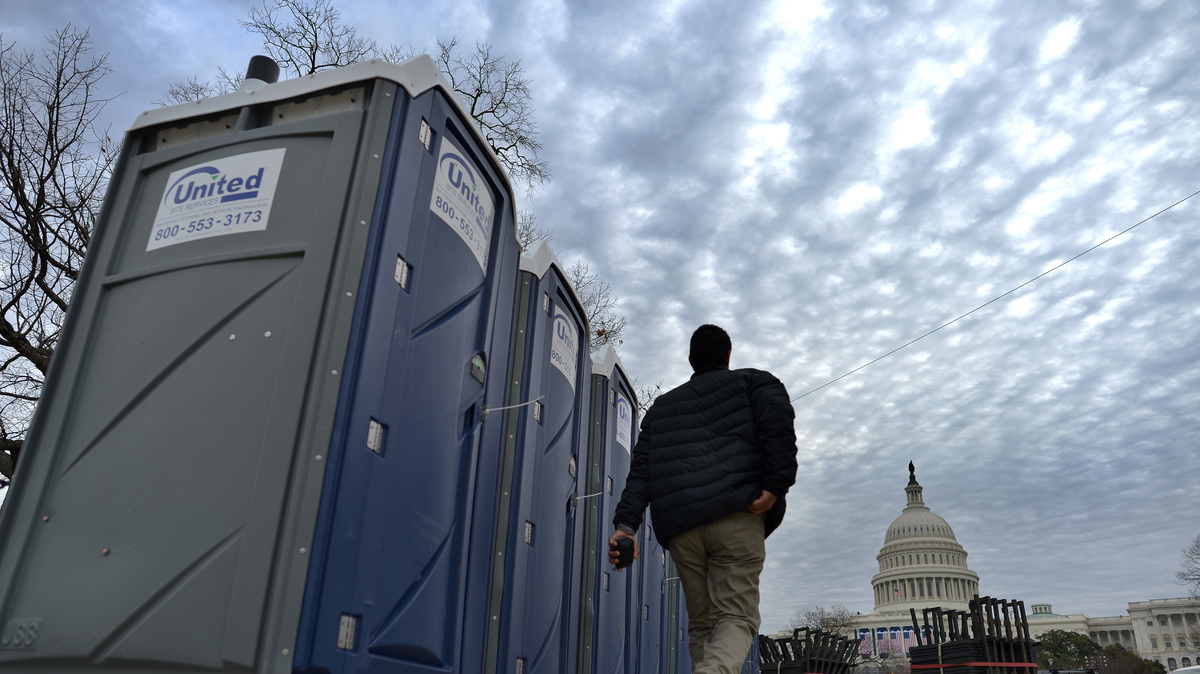 Portable toilets are installed around the U.S. Capitol in preparation for Monday's inauguration. A new app this year will help the crowd follow the event — and even find the closest port-a-potty.

Inaugural events are sprinkled over three days, with the most important one actually taking place out of the public eye on Sunday. That's when the official oath of office will be administered at the White House, on the date and time (noon on Jan. 20) specified by the Constitution. But because the 20th falls on a Sunday this year, the public festivities, including another oath taking, all happen Monday.

This is the seventh time in the nation's history that Inauguration Day has fallen on a Sunday, with the public swearing-in pushed to Monday in each instance. The precedent was set in 1821, as James Monroe began his second term.

In Monroe's case, as well as the next time it happened, with Zachary Taylor in 1849, no private weekend swearing-in was held. That practice began in 1877 with Rutherford B. Hayes.

This is also the second Inauguration Day to coincide with the federal holiday to honor civil rights leader Dr. Martin Luther King Jr., after President Bill Clinton's second inaugural in 1997.

Here are highlights of Monday's inauguration on the West Front of the Capitol. The "tentative" times are provided by the Joint Congressional Committee on Inaugural Ceremonies:

11:09 a.m.: The Obama family is announced and seated in the inaugural platform, built by the Architect of the Capitol, which will hold some 1,600 people, including members of Congress, the Cabinet and the Supreme Court, the Joint Chiefs of Staff, and former presidents and governors.

11:35 a.m.: Invocation by Myrlie Evers-Williams, the widow of slain civil rights organizer Medgar Evers. She will be the first woman and first nonclergy member to lead the pre-oath prayer.

11:46 a.m.: Supreme Court Justice Sonia Sotomayor administers the oath of office to Vice President Joe Biden. Sotomayor is the first Hispanic and fourth woman to swear in a president or vice president.

11:55 a.m.: Chief Justice John Roberts administers the oath of office to President Obama, who will use two Bibles: the one used by President Lincoln in 1861 (which Obama used four years ago); and a Bible that belonged to Dr. Martin Luther King Jr.

It will be the fourth time Roberts and Obama recite the oath: twice in two days this weekend, and twice during Obama's first inauguration in 2009. That year, they did a private do-over swearing in the day after the public ceremony "out of an abundance of caution" because there had been a slight word mix-up the first time.

12:30 p.m.: The Rev. Dr. Luis Leon delivers the benediction. The pastor of St. John's Episcopal Church near the White House was chosen after Atlanta pastor Louie Giglio withdrew from the ceremony, facing criticism for statements about gay relationships.

2:36 p.m.: After attending an inaugural luncheon in the Capitol, the Obamas and Bidens lead the inaugural parade down Pennsylvania Avenue from the Capitol to the White House. The event will take several hours and include thousands of participants from across the country.

The inauguration is expensive, with the official event financed by taxpayers, and the parade and inaugural balls and other ceremonial activities covered largely by private donations. Exact costs aren't known, but with recent history as a guide, the taxpayer-funded portion — including security, transportation and emergency services — could comprise most of the final bill.

Four years ago, Obama raised $53 million for the non-publicly funded aspects of his inauguration, which attracted a record 1.8 million people to the nation's capital. ABC News puts the total cost of that inauguration — public and private — at $170 million, and has a good breakdown of known costs this time. This year's crowd won't be as big as 2009, and events have been scaled back. Festivities are down from four days to three, and the 10 official balls have been cut to two. Obama also is accepting corporate donations, which he didn't four years ago.

There are a lot of historical firsts, but the biggest change in how we'll experience the nation's 57th inaugural relates to technology. There's an official app, as you'd expect (which, among other things, will help those on the National Mall find a port-a-potty). And in a real sense, this will be the first Tweeted inauguration. Twitter was around in early 2009, just on the cusp of an explosion in its use, but an overloaded cellular system virtually shut down mobile phone usage on and around the Mall.

"Phone companies are setting up an extensive network of temporary towers and other equipment the length of the Mall to handle the explosion in wireless traffic," The Washington Post reports, with at least nine towers and signal repeaters in three hotels. NPR, among others, is basing part of its live coverage plan on updates and social media images coming from the festivities.

Senate historian Donald Ritchie said beyond the constitutionally required start of a presidential term, the inauguration can "set a tone" for an administration — even a second term, when there's no change in president. He called it an "anti-political event" that "puts an end to the presidential campaign" and brings together the three branches of government in an event organized by Congress and administered by the chief justice.

And while it has happened just a few times in the nation's history (think Franklin D. Roosevelt's "The only thing we have to fear" declaration, and John F. Kennedy's "Ask not what your country can do for you" speech) the inaugural address can be a transcendent moment. Abraham Lincoln's second inaugural address is carved on his memorial, toward which Obama will face as he speaks. But as Obama and his speechwriters are no doubt aware, the speeches of many, many other presidents are largely lost to history.