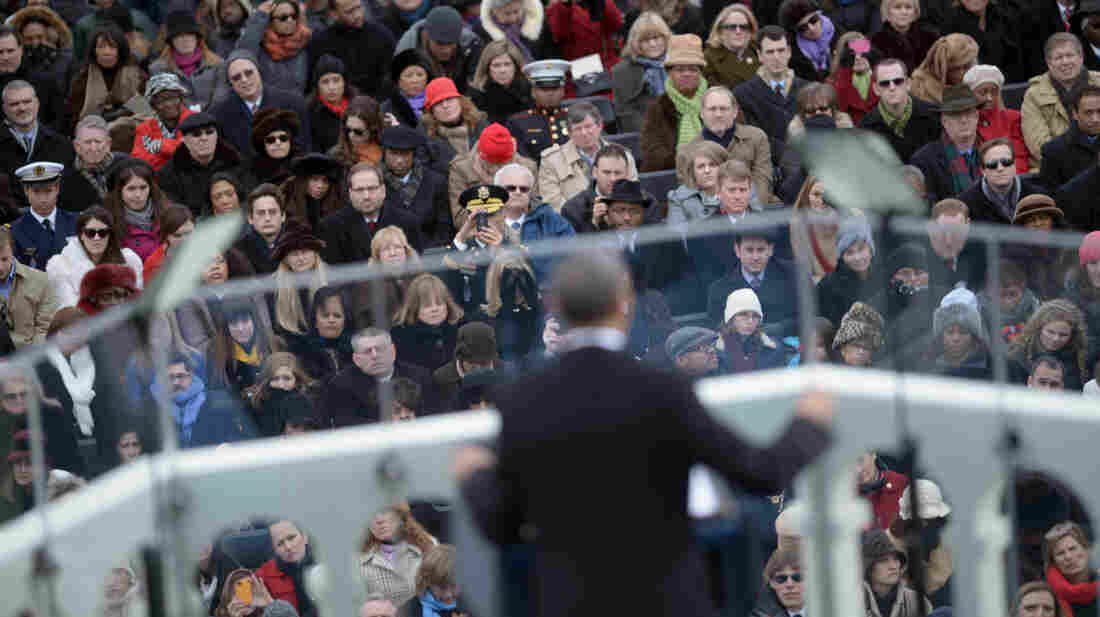 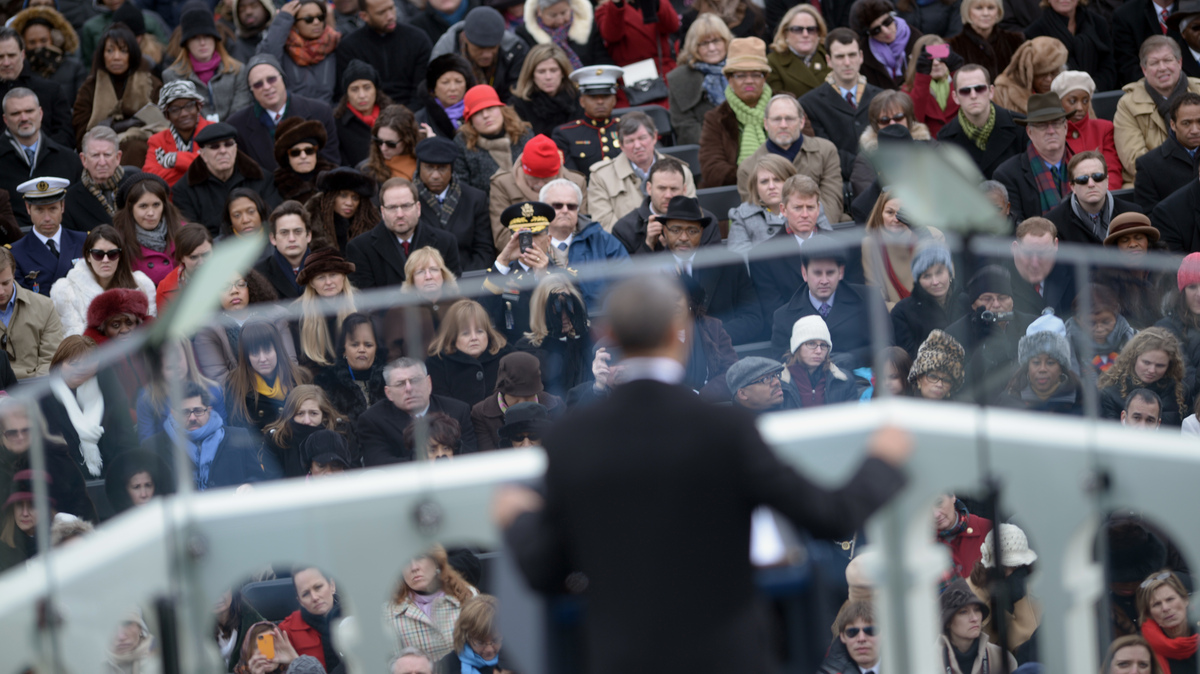 President Obama gives his inaugural address after taking the oath of office Monday.

"Together, we discovered that a free market only thrives when there are rules to ensure competition and fair play," the president said. "Together, we resolved that a great nation must care for the vulnerable and protect its people from life's worst hazards and misfortune."

"He pointed out very clearly that the U.S., when we set our mind to it, we can get things done," said Cardin, a Maryland Democrat. "It was very clear about moving this country forward to its best days."

With its calls for "collective action" and defense of government spending on infrastructure and human capital, at times Obama's speech sounded like a rejoinder to criticisms he had received during last year's campaign with his "you didn't build that" remark.

I think it portends a very ideological, aggressive approach from this administration.

That comment, which was about how business creation relied on public investments, became a hallmark of Republican criticism, particularly during the GOP national convention.

Obama, despite his frequent calls for Americans to work with common purpose, made no remarks that suggested he was ready to embrace Republican ideas. Instead, he insisted on a communitarian vision that, he said, will fulfill the nation's "creed," as outlined by America's Founding Fathers.

"I think it portends a very ideological, aggressive approach from this administration," says Tim Phillips, president of Americans for Prosperity, a conservative group that favors limited government. "It's ironic, because he has less of a mandate this time than last time."

Leaving The Heavy Lifting For Later

For all the pageantry of the occasion, the president's second inaugural address may matter less than the State of the Union, which Obama will deliver on Feb. 12.

That speech will do more to flesh out the specifics of his agenda for the year and perhaps the entirety of his second term. Obama's address on Monday, however, made clear that he intends to pursue policies that will use the power of government to bolster the middle class.

"The commitments we make to each other — through Medicare, and Medicaid, and Social Security — these things do not sap our initiative; they strengthen us," the president said. "They do not make us a nation of takers; they free us to take the risks that make this country great."

Obama called on the nation to be more welcoming to immigrants, saying he would prefer to see "bright young students and engineers ... enlisted in our workforce rather than expelled from our country."

He called for the U.S. to take the lead in developing technology to address climate change. He made clear his hopes that a long period of war is nearing its end but pledged to remain vigilant in defending democracy abroad.

Obama did not address the issue of gun control directly, but he did refer to Newtown, Conn., the site of last month's horrific school shootings, as part of his call to keep "all our children ... always safe from harm."

Inclusion was central to the president's message, particularly in passages that highlighted the struggle for civil rights.

The invocation was delivered by Myrlie Evers-Williams, the widow of Medgar Evers, a martyr of the civil rights era of the 1960s.

"Our journey is not complete until our wives, our mothers and daughters can earn a living equal to their efforts," Obama said.

That may have been a reference to an equal-pay bill that was the first one Obama signed into law as president in 2009. That bill, in turn, came in response to a Supreme Court decision on the issue.

With the Supreme Court set to consider same-sex-marriage rights in March, gay-rights activists were heartened by the president's mention of Stonewall — a New York City bar that was the scene of rioting in 1969 that helped kick off the modern gay-rights movement.

"Our journey is not complete until our gay brothers and sisters are treated like anyone else under the law," Obama said, "for if we are truly created equal, then surely the love we commit to one another must be equal as well."

"Mentioning Stonewall in the same breath as Selma moves us beyond the era of gay rights as special pleading and into the era of full gay integration," says Jonathan Rauch, a guest scholar at the Brookings Institution and author of a book about gay marriage. "The fact that he made the theme so prominent tells me that he sees gay equality as a major legacy item, which it will be. He's gays' LBJ."

No Room For Compromise?

If Obama's supporters were heartened by the sentiments that he expressed in favor of equality and communitarian effort, Republicans sounded less impressed.

Many had chosen to be elsewhere during his inauguration, including the two living former GOP presidents. George W. Bush had sent his regrets last Friday, while his father has been recovering from an illness.

Early reaction from conservatives on social media suggested concern that this speech will be the first among many in his second term in which Obama will offer calls for "big government."

"I think it showed part of what we've seen through the last month or so since the election, that he's going to be a more aggressive president," says Michael Tanner, a senior fellow at the libertarian-leaning Cato Institute.

"He believes he's got a short period of time to get things done, which is true, and he's going to try to be aggressive," says Tanner. "The 'let's-all-get-along president' we saw at the beginning of his first term has changed to, 'I won, so let's all fall in line.' "