Accessibility links
Stonewall? Explaining Obama's Historic Gay-Rights Reference : It's All Politics President Obama made history in his inaugural address when he mentioned Stonewall in the same breath as Selma, the Alabama town considered the birthplace of the black-rights movement. A historian discusses what happened at that New York bar in 1969 that kindled the nation's gay-rights movement. 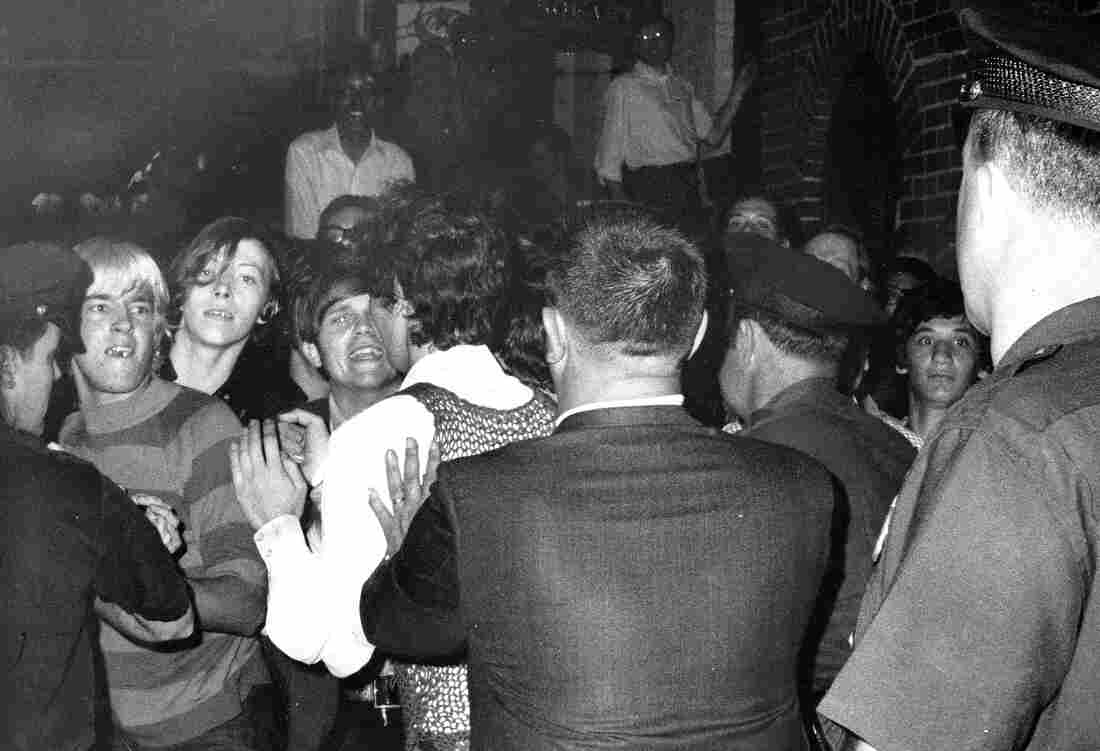 The crowd faces off with police at the Stonewall Inn nightclub raid in the summer of 1969 in New York City. New York Daily News Archive/NY Daily News via Getty Images hide caption 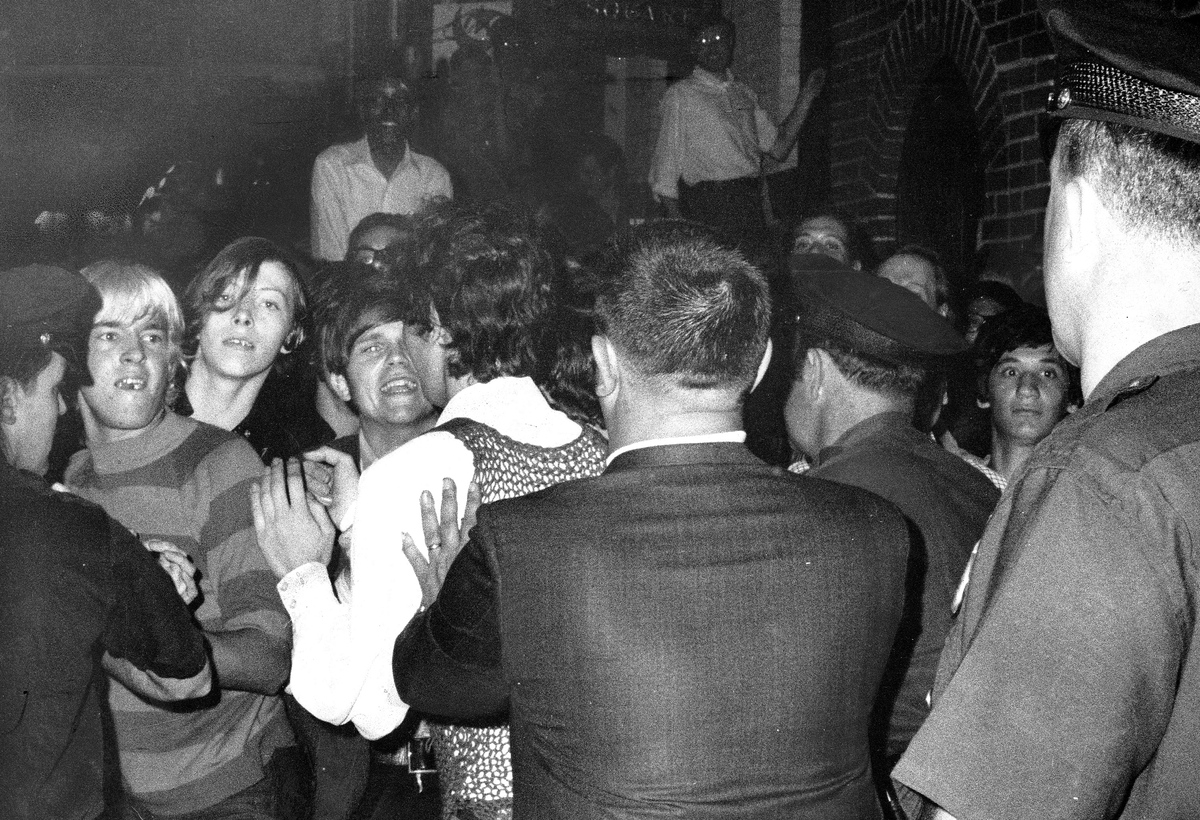 The crowd faces off with police at the Stonewall Inn nightclub raid in the summer of 1969 in New York City.

President Obama made history in his inaugural address when he mentioned Stonewall in the same breath as Selma, the Alabama town considered the birthplace of the black-rights movement, and Seneca Falls, the upstate New York site of the first women's-rights convention.

But Obama's reference was very likely lost on many in the generations that have come of age long after gay men resisted police harassment at the Stonewall Inn gay bar in New York City.

Their five days of riots in the summer of 1969 kindled the nation's gay-rights movement, which Obama placed in the heart of the nation's civil rights struggles in Monday's speech. Obama said:

"We, the people, declare today that the most evident of truths — that all of us are created equal — is the star that guides us still, just as it guided our forebears through Seneca Falls, and Selma, and Stonewall, just as it guided all those men and women, sung and unsung, who left footprints along this great Mall, to hear a preacher say that we cannot walk alone, to hear a King proclaim that our individual freedom is inextricably bound to the freedom of every soul on Earth."

So, what was Stonewall?

To get the story from someone who was part of the nascent gay-rights effort, and who has written extensively about Stonewall's role as the galvanizing event of the movement, we turned to Martin Duberman.

To Duberman, 82, a historian, author of the 1993 book Stonewall and gay-rights activist for most of his life, Obama's reference — and linking the watershed event to Selma, in particular — was a surprise.

"I was very startled; I was pleased," he said Tuesday from his home in New York City.

We asked Duberman to take us back to the late 1960s in New York City, where gay Americans there and across the nation were openly discriminated against in most areas of life, from the workplace to housing, from family life to free time.

It was a time that every gay man Duberman knew in New York City would carry in his wallet the telephone number of the only two lawyers in the city "who could get you out of jail in case you were arrested by plainclothes police officers."

The Stonewall Inn, in Greenwich Village, was one of the few places where gay men, almost all necessarily closeted, could gather. It was an unlicensed establishment because, at the time, it was illegal to serve alcoholic beverages to gay people. 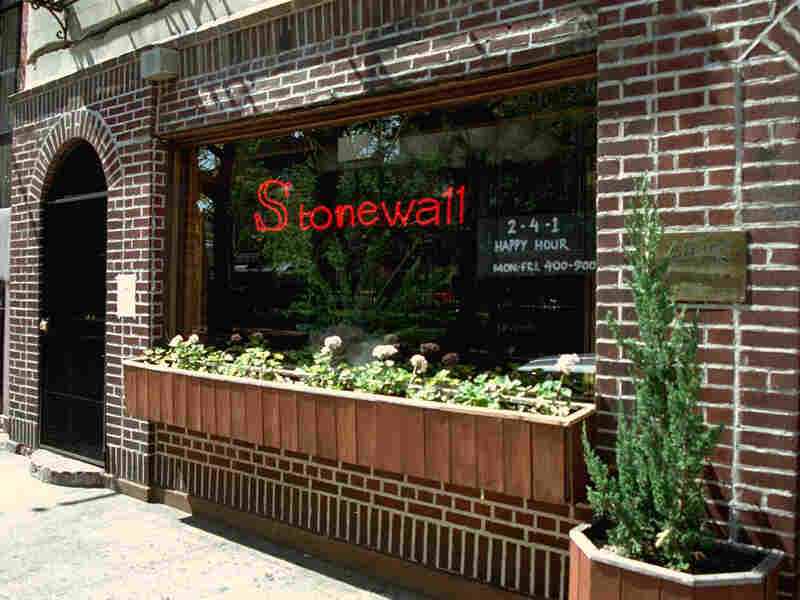 The Stonewall Inn in the Greenwich Village section of New York City was the site of the 1969 riot that sparked the gay-rights movement. Kevin Larkin/AP hide caption 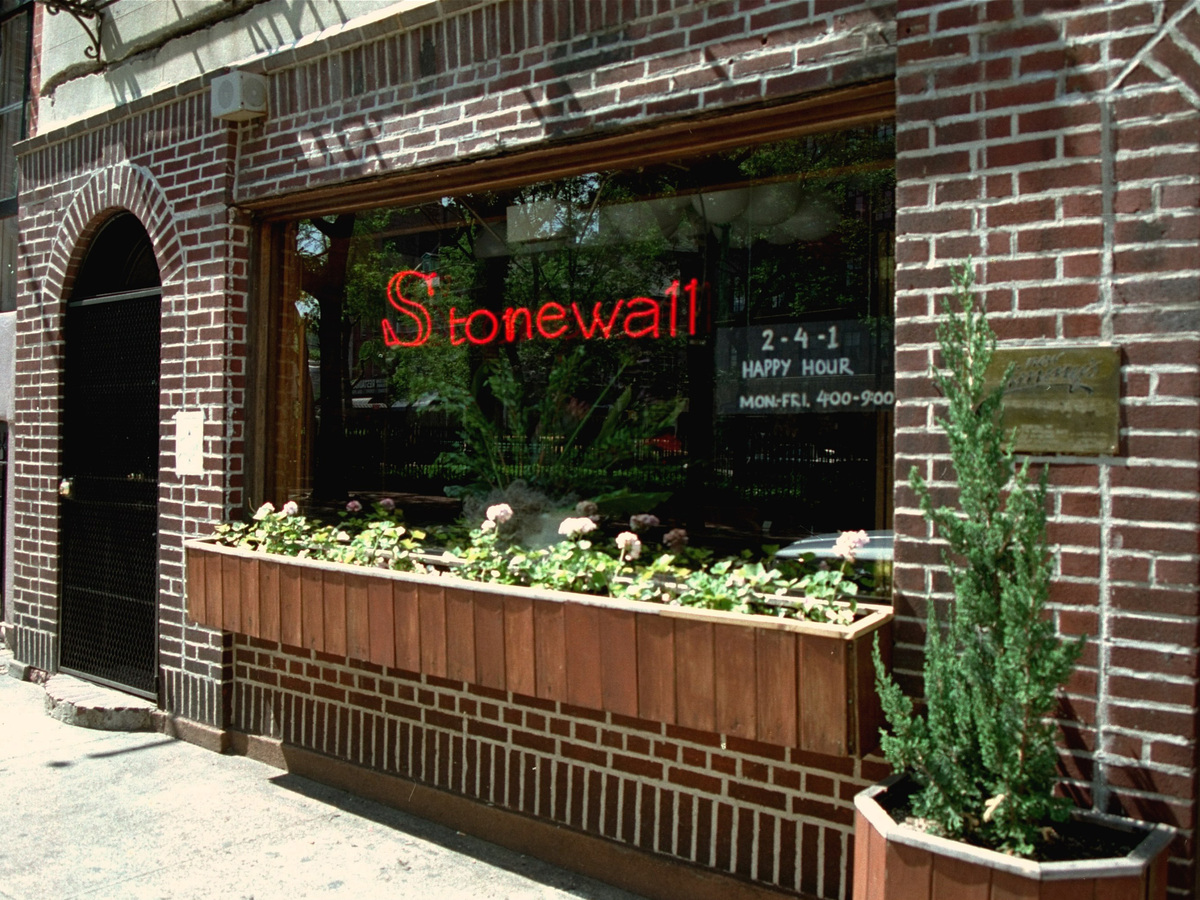 The Stonewall Inn in the Greenwich Village section of New York City was the site of the 1969 riot that sparked the gay-rights movement.

"Stonewall was probably the most popular gay male bar in New York in the late '60s," Duberman said. "It was one of the few, or maybe the only place where you could dance."

Controlled by the Mafia, as Duberman said most gay bars were at the time, it was his bar of choice.

"I liked the mix of people," he said. "It was not filled, as some accounts have it, with drag queens and street hustlers — it was a nice mix of young and middle-aged, prosperous and not prosperous."

Bouncers at the door screened patrons, but they couldn't keep out police, who with some frequency would "raid" the bar, roust the patrons, and perhaps charge them with infractions ranging from loitering to specific regulations that at the time targeted gay men.

"They were using any excuse," Duberman said. "For example, you had to be wearing at least four pieces of 'gender-appropriate' garb."

Usually, he said, patrons would cower when the police would storm through, at times throwing customers against the wall, sometimes making arrests.

When police raided the bar, and pushed customers outside, Duberman said, the men began to throw things back at the police — coins, bricks; eventually, a parking meter.

"It was really a howling mob, filled with the pent-up fury of years of oppression," he said. "It just all came out then for some reason. These things have a spontaneity to them that is never predictable."

The police, holed up in the Stonewall bar, were saved by a tactical support crew; there were injuries.

Here's how The New York Times described it the following day, in a story headlined, "4 Policemen Hurt In 'Village' Raid":

"Hundreds of young men went on a rampage in Greenwich Village shortly after 3 a.m. yesterday after a force of plainclothes men raided a bar that the police said was well known for its homosexual clientele. Thirteen persons were arrested and four policemen were injured.

The young men threw bricks, bottles, garbage, pennies and a parking meter at the policemen, who had a search warrant authorizing them to investigate reports that liquor was sold illegally at the bar, the Stonewall Inn, 53 Christopher Street, just off Sheridan Square."

The New York Daily News a few days later, in a story headlined "Homo Nest Raided, Queen Bees Are Stinging Mad," characterized the riot as exploding "with all the fury of a gay atomic bomb."

We would never have dreamed that a president would mention Stonewall in the same breath as Selma."

The rioting continued for five nights.

It wasn't the first time gay men had pushed back, said Duberman, who earned his doctorate at Harvard, taught at Princeton and Yale, and as a distinguished professor at the City University of New York founded the Center for Lesbian and Gay Studies.

Gay men in San Francisco had already been protesting their treatment at the hands of police. But, for whatever reason, he said, "Stonewall somehow became the symbol for all of this."

From the Stonewall uprising came activists groups, gay-rights organizations, and in 1970, the first Gay Pride marches in New York and other major American cities on the anniversary of the first night of the riots.

In 1999, the Stonewall Inn building, and the small streets around it, was listed on the National Register of Historic Places.

M. John Berry, then the assistant secretary of the Department of the Interior, told The New York Times that Stonewall was the "first such historic site recognizing the national significance and contributions of lesbians and gay men."

"Even those of us who became active immediately after Stonewall never dreamed that even 40 years later there would have been enough progress to be noteworthy," Duberman said. "We would never have dreamed that a president would mention Stonewall in the same breath as Selma."