Accessibility links
Key Player In '94 Assault Weapons Ban: 'It's Going To Be Much More Difficult' Now : It's All Politics Since the assault weapons ban passed in the mid-1990s, Congress has had little appetite for gun control measures. "I think it was a very different time in 1994. I don't think there's very many lessons to learn from that," says Ted Kaufman, who was then-Sen. Joe Biden's chief of staff. 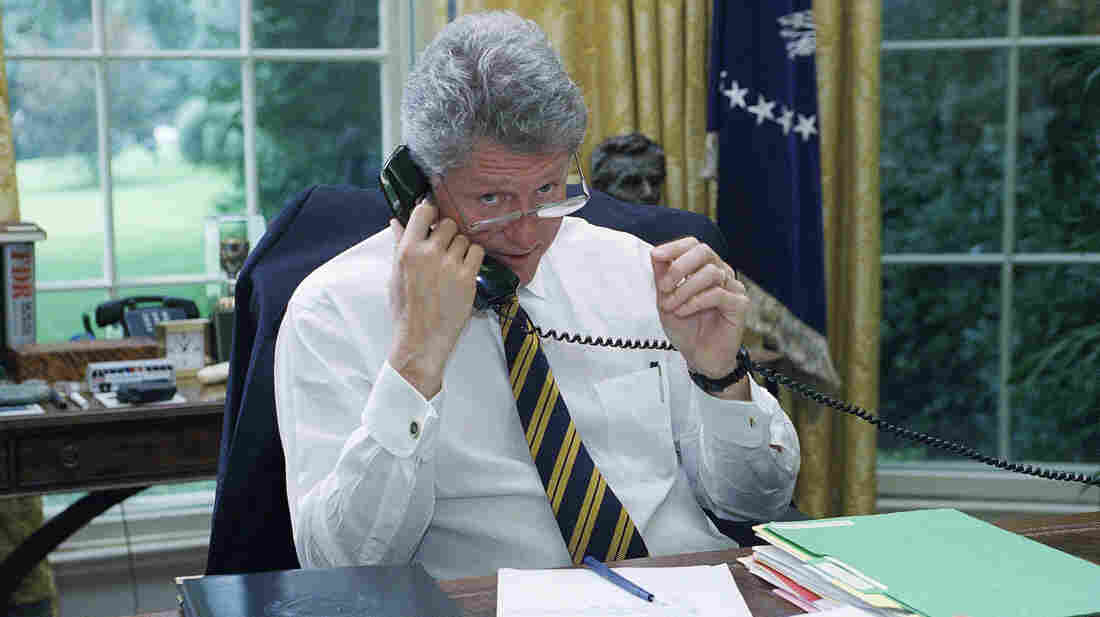 President Clinton speaks to a member of the House on Aug. 11, 1994, lobbying for votes for the crime bill. Marcy Nighswander/AP hide caption 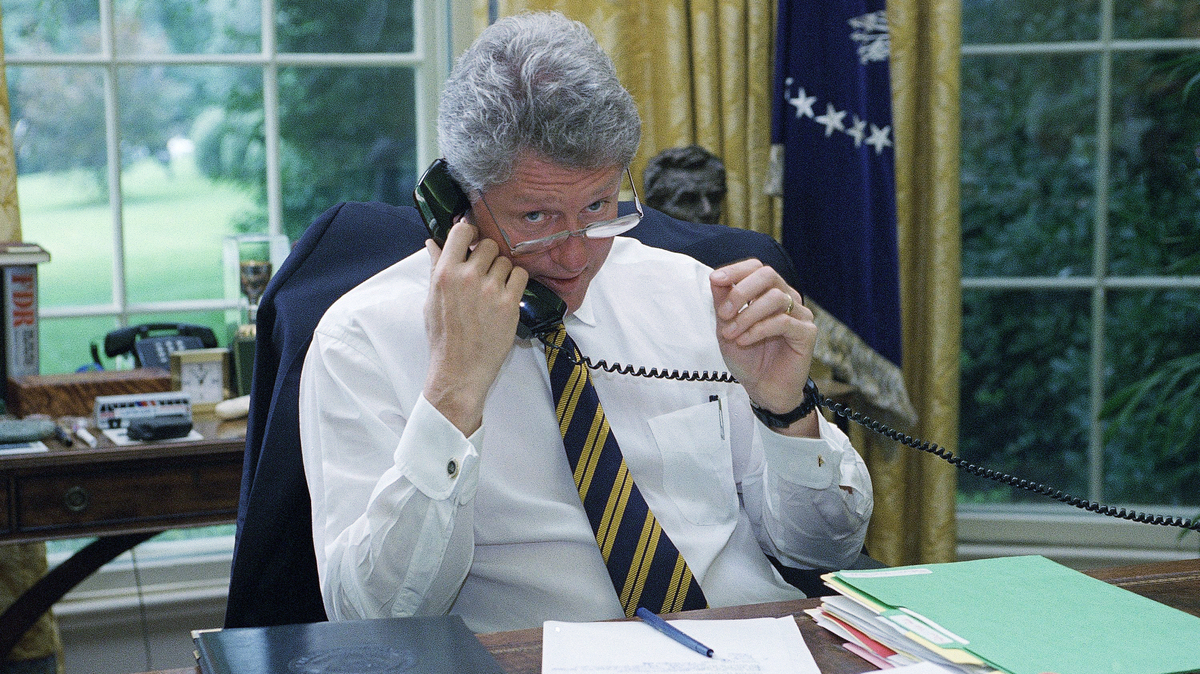 President Clinton speaks to a member of the House on Aug. 11, 1994, lobbying for votes for the crime bill.

President Obama's proposed renewal of a ban on assault-style weapons is expected to be based on the legislation approved by Congress in 1994 that expired 10 years later.

Democrats controlled both the House and Senate, and the nation's crime rate was a major concern. The assault weapons ban was part of an extensive crime bill that included money to hire additional police, build new prisons and fund crime prevention programs.

President Clinton made the bill a top priority of his first term.

"The American people have waited long enough," he said. "We don't need to waste their time with frivolous or political amendments and delay. We don't need to take months on a task that can be done in a couple of weeks."

Then as now, Vice President Biden played a central role in the debate. In 1994, Biden, then a senator from Delaware, strongly argued in favor of banning assault-style weapons. "In case after case of murderous rampages by disturbed and violent thugs, the ability of military-style assault weapons to kill and maim not just a few but eight or 10, 14, 35 people in just minutes has been proven beyond any reasonable doubt," he said.

In 1994, former Delaware Sen. Ted Kaufman was Biden's chief of staff and, as such, a key player in negotiations that led to passage of the crime bill. He says he's not sure much that happened then applies nearly 20 years later.

"I think it was a very different time in 1994. I don't think there's very many lessons to learn from that," he says. "This was a very small part of a much bigger bill and people were really interested in dong something about crime. I think right now this bill is going to have to be standalone. It's going to be much more difficult than 1994."

Not that it was easy in 1994. As Paul McNulty remembers it, that August — a time when lawmakers would normally have been on their summer recess — was filled with meetings and late-night bargaining.

McNulty, who went on to become deputy attorney general and is now in private practice, was then working as a House Republican staffer. He says the crime bill nearly died on a procedural vote.

"The gun control issue was the top issue that had stirred up a lot of controversy at that point," he says.

Lawmakers argued over how to define the ban, and which specific weapons and features it would apply to. They eventually settled on a list of 19 guns and agreed to sunset the law entirely in 10 years. Those concessions were necessary to win support for the ban.

Perhaps the biggest difference between then and now: In 1994, there were House Republicans who backed the crime bill.

"There were a group of Republicans, approximately 40 or so, who represented more moderate districts, districts in the North, Midwest, where they weren't in complete opposition to an assault weapon ban," McNulty says.

In the November election later that year, Republicans won control of Congress, which some have attributed to Democratic support for the crime bill. While that's a matter of debate, it's clear that Congress has had little appetite for gun control measures since then — a dynamic President Obama hopes will have been changed by the Newtown, Conn., school shootings.