Accessibility links
Immigration Opponents Remain Adamant, Despite Political Risk : It's All Politics President Obama will address the immigration issue in a speech Tuesday, following hard on the heels of a new overhaul proposal out of the Senate. Despite new momentum on the issue, those who favor a harder line against illegal immigrants are not convinced they need to change tack. 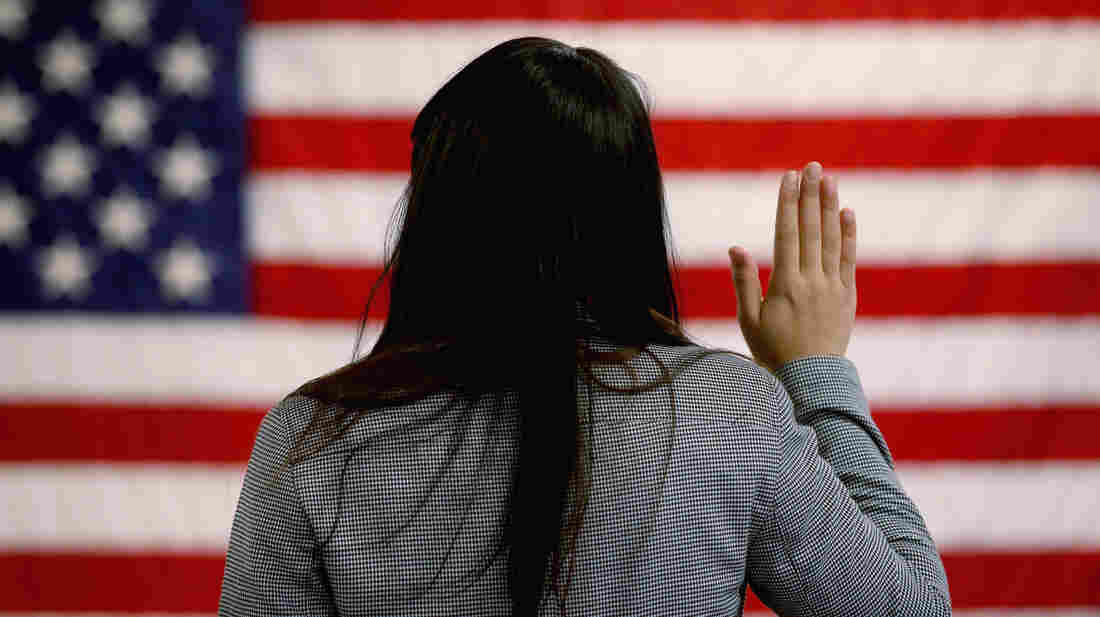 A woman takes the oath of allegiance during a naturalization ceremony at the district office of the U.S. Citizenship and Immigration Services in Newark, N.J. John Moore/Getty Images hide caption 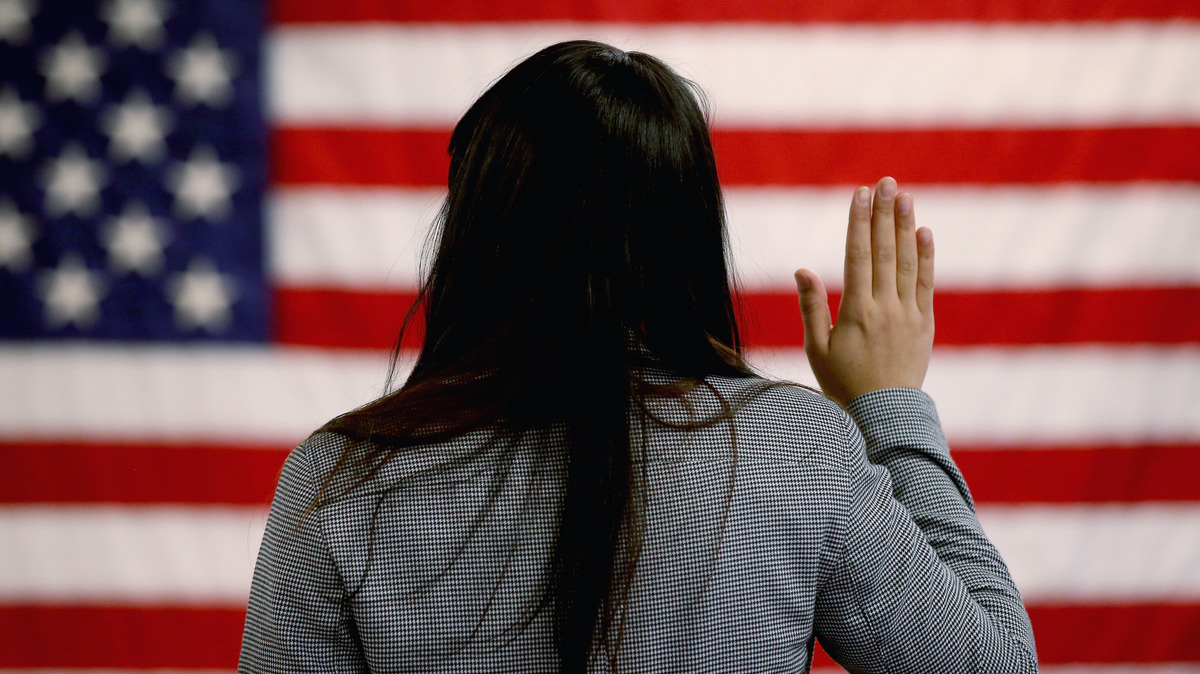 A woman takes the oath of allegiance during a naturalization ceremony at the district office of the U.S. Citizenship and Immigration Services in Newark, N.J.

After years of inaction, immigration policy changes suddenly have notable momentum in Washington.

President Obama will address the issue in a speech Tuesday in Las Vegas — a day after a bipartisan group of senators outlined their ideas for a bill that could move through the chamber as early as this spring.

There's little mystery as to why immigration is gaining traction. Obama owes his re-election victory in large part to Hispanics, who gave him 71 percent of their vote in November, according to exit polls.

Since then, conventional wisdom in the media has held that the GOP is going to have to soften its stance on the immigration issue in order to have a chance in national elections.

"There are some Republicans who have read the results of the election to suggest that they need to change their position on immigration in order to have a hope of winning the votes in the future of Latinos," says Jessica Vaughan, director of policy studies at the Center for Immigration Studies, which favors limits on immigration.

But the conventional wisdom could be wrong, Vaughan says. Not all Republicans have changed their minds — and not all Democrats, either.

Many continue to believe the best way to curb the influx of undocumented immigrants is to make it more difficult for such people to get employment, housing and other necessities of life.

They will have to be convinced of the merits of the comparatively open approach favored by Obama and the bipartisan working group in the Senate, if such ideas are going to have a real chance of becoming law. 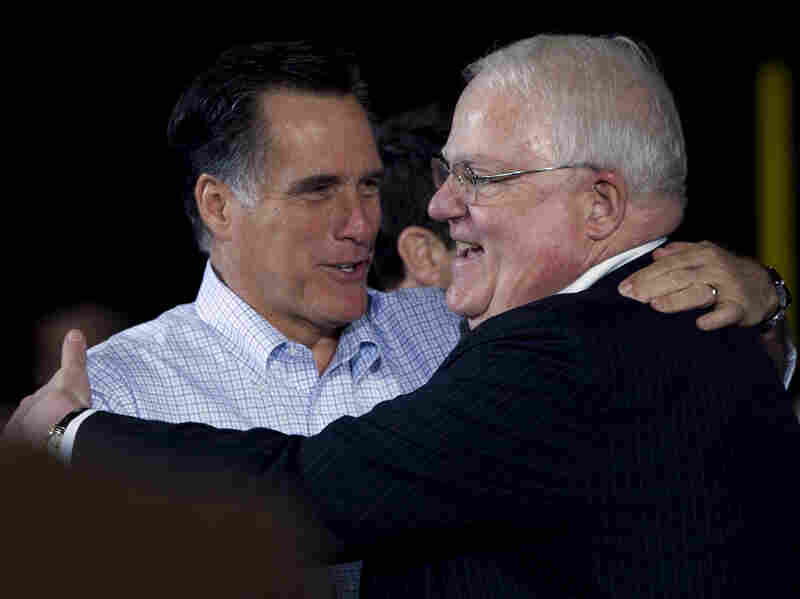 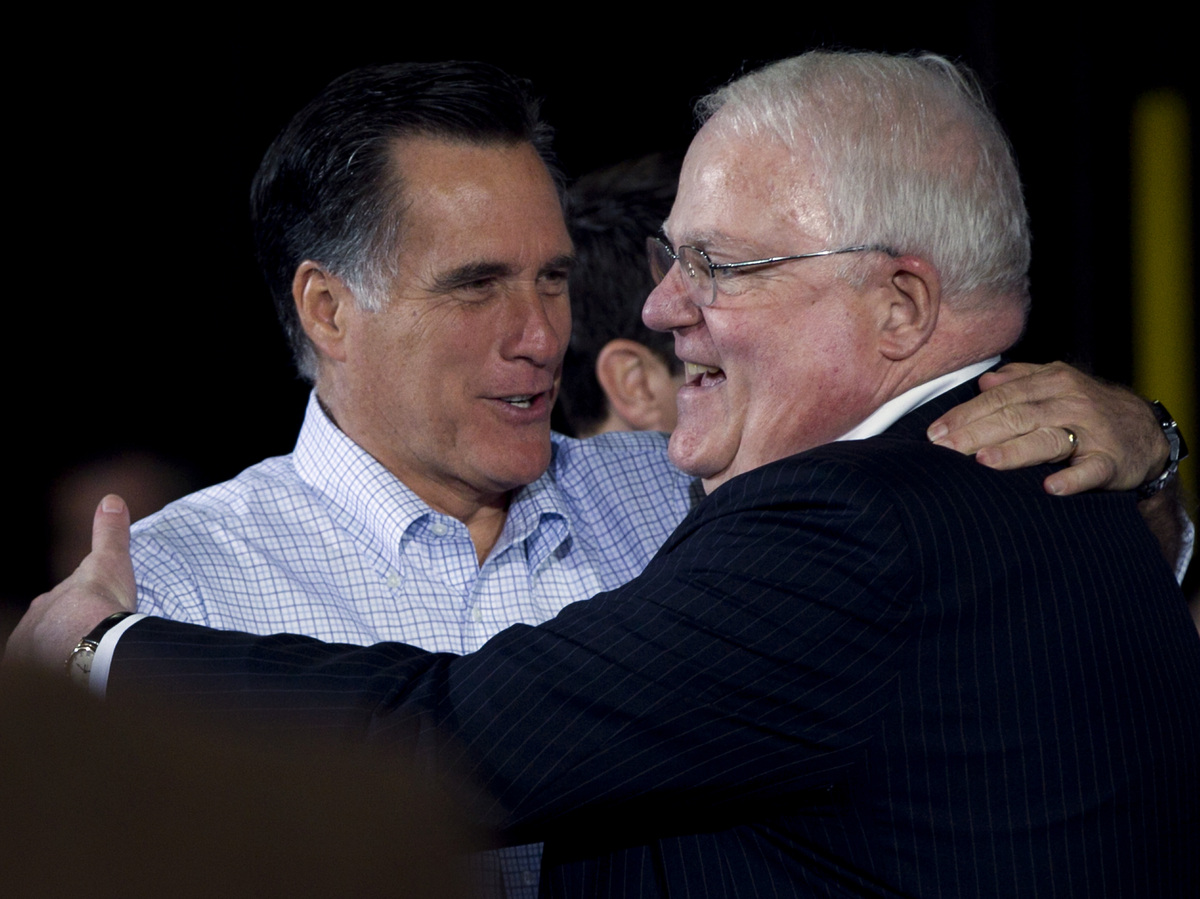 A fair amount of Republicans support making life so uncomfortable for illegal immigrants that they will "self-deport," as Mitt Romney said during last year's GOP primaries. Such thinking has damaged the GOP brand among Hispanics, but some Republicans argue that it's still the right approach.

The fact that net migration from Mexico has dwindled during the recession is proof that such tactics work, says Bob Dane, communications director for the Federation for American Immigration Reform, a group that favors immigration limits. "If you dry up the jobs magnet [through employment eligibility verification], that would solve the problem," he says.

"The economy will ultimately rebound, and if a major amnesty bill passes, it really will send a global message that America's de facto immigration policy is occasional amnesty," he says. "People will stand in line and wait for the next round of amnesty."

The last time Congress made a serious effort at addressing immigration came toward the end of George W. Bush's presidency. Back then, the House and Senate made moves in different directions.

The House in 2005 passed a bill that would have, among other things, classified illegal immigrants as felons. The following year, the Senate passed a bill that closely resembles the proposal outlined this week, including an increase in guest workers and ways for people presently in the country illegally to gain citizenship. Senate sponsors tried again in 2007 but didn't get very far.

"We had an identical bill proposed, and the American people said, 'No, thanks,' and that's putting it nicely," Dane says. "Nothing is different."

Congress has since done little with the immigration issue — a vacuum filled by numerous states that have enacted hundreds of laws in recent years, including controversial measures calling on local police to check the immigration status of people they believe are in the country illegally.

But the political dynamics surrounding the immigration issue have changed. For one thing, it's lost some salience among rank-and-file Republican voters who once viewed it as a top priority.

Six years ago, illegal immigration was the second-leading concern among Republicans, after terrorism, according to the Pew Research Center. Now, it's tied for 12th.

Even among Hispanics — as critics of a more open immigration policy, such as Texas Rep. Smith, are fond of pointing out — immigration does not rank as the paramount concern, lagging the economy and health care, some polls show.

Still, the issue clearly remains important to Latino voters, a majority of whom have relatives or friends who are undocumented, according to the polling firm Latino Decisions. Nearly a third of Hispanics would be more likely to support Republicans if the party takes a leading role in passing legislation that includes a path to citizenship, the group says.

And they are increasingly important political players. Hispanics cast 10 percent of the ballots last November. By 2030, according to Pew, their ranks are likely to double as a share of the electorate.

Many members of Congress will weigh the new proposals based on principle, talking up the need to secure the border and figuring out ways to encourage skilled workers to come to the U.S. without opening up the floodgates.

"Extending amnesty to those who came here illegally or overstayed their visas is dangerous waters," Wisconsin Rep. James Sensenbrenner, a Republican who sponsored the 2005 House bill, said in a statement Monday. "We are a nation of laws, and I will evaluate any proposal through that matrix."

But political calculations undoubtedly will be part of the mix. And that cuts both ways. Some Republicans will be wary of the direction Obama wants to go, if only because granting citizenship to millions of illegal immigrants could turn them into loyal Democratic voters.

"The problem is not just longtime opponents, but people who are Republicans we need, who are from districts that need the workers," says Tamar Jacoby, president and CEO of ImmigrationWorks USA, a business-backed group that favors the approach outlined by the Senate working group. "They say, 'I don't have Latinos in my district' or 'I'm worried about being primaried from the right.' "

Just as Obama will be pressing his case, people who favor maintaining a hard and fast line against illegal immigration will be working to sway colleagues who might be nervous about shifting political demographics.

Mitch McConnell of Kentucky, the Senate Republican leader, told reporters Monday that the issue was too important to be "written in a back room, sent to the floor with a take-or-leave-it approach."

"There's no indication that the House of Representatives is interested in passing anything like this," says Vaughan, the CIS policy studies director. "I don't even know if it can pass the Senate in the form that's being talked about."

Vaughan says she has heard from Republicans who believe the party will never gain traction among Hispanics, no matter how it votes on a so-called amnesty proposal.

"Let's appeal to Hispanics like we appeal to all Americans, which is to talk about improving their economic fortunes," Rep. Smith says. "I don't think it will ever be natural for Republicans to outbid Democrats in giving benefits to people who are in the country illegally."