Accessibility links
Obama Lays Out Immigration Plan But Avoids Thorny Issues : It's All Politics The president endorsed the proposals unveiled Monday by a bipartisan group of senators. He called for a path to citizenship for the more than 11 million illegal immigrants. But he avoided issues such as how long those in the country illegally could be forced to wait before applying for citizenship. 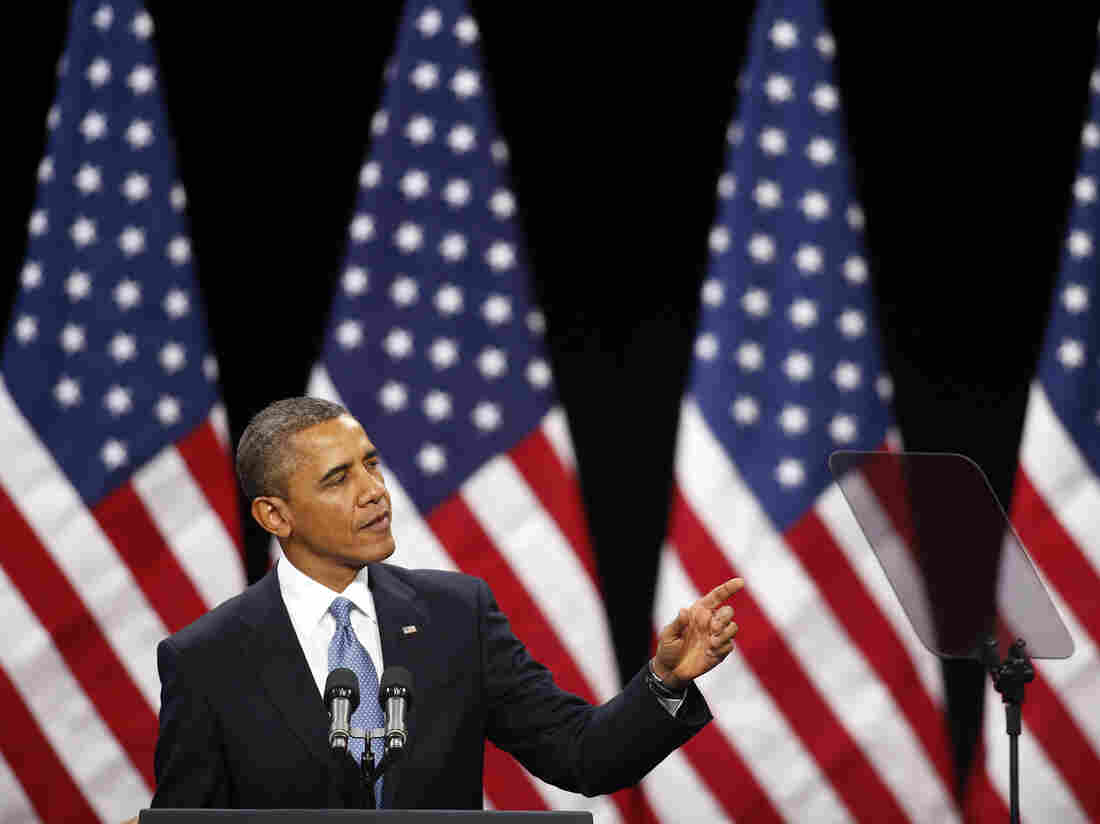 President Obama's speech in Las Vegas on Tuesday on the country's immigration system was as notable for what was said as for what wasn't. Isaac Brekken/AP hide caption 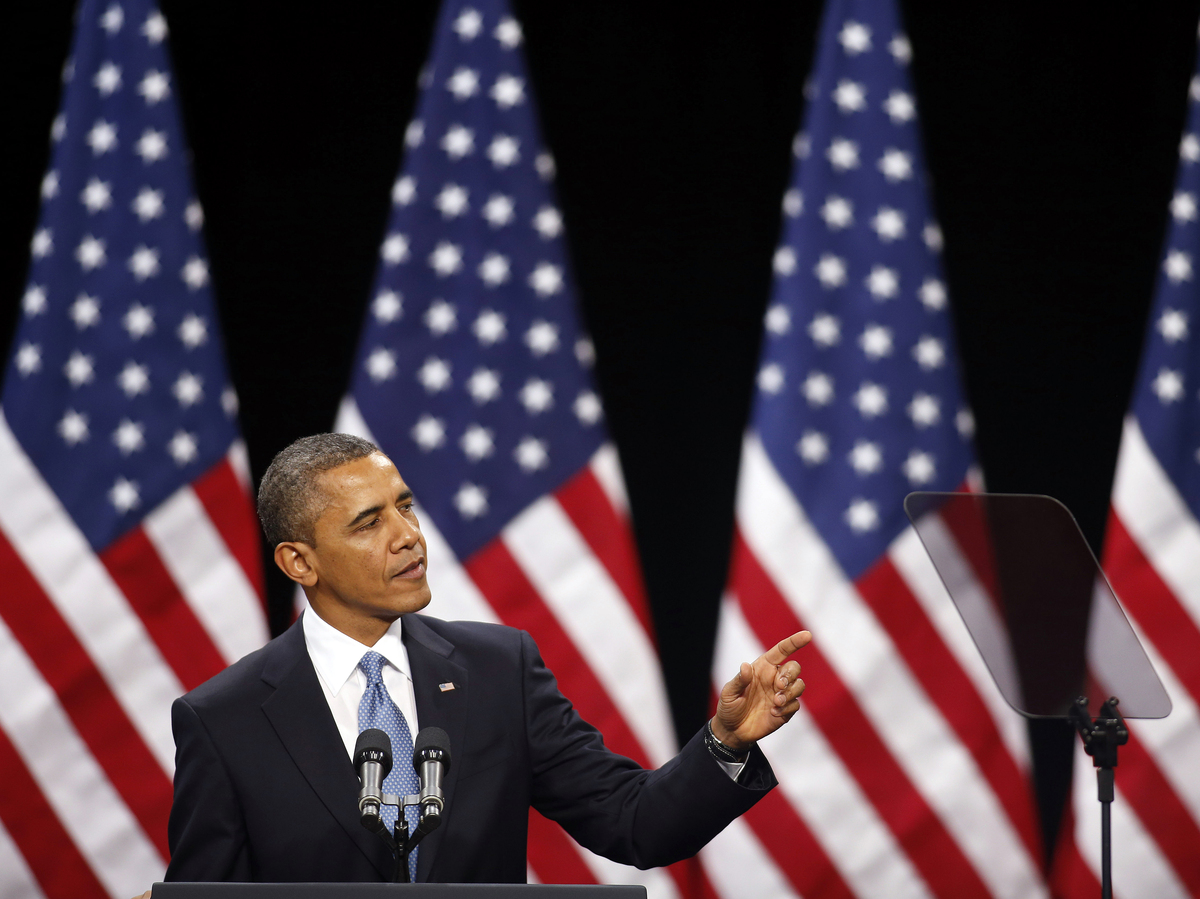 President Obama's speech in Las Vegas on Tuesday on the country's immigration system was as notable for what was said as for what wasn't.

President Obama's highly anticipated speech Tuesday outlining his blueprint for an overhaul of the nation's immigration system was perhaps most notable for the big issues left unaddressed.

Rather than wade into thorny territory, and potentially derail the bipartisan momentum in the Senate, the president struck an optimistic, populist tone as framer-in-chief.

"The good news is for the first time in many years, Republicans and Democrats seem ready to tackle this problem together," Obama said in Las Vegas. "The question is do we have the resolve as a people, as a country, as a government, to finally put this issue behind us? I believe that we do."

Obama was clear in calling for a route to citizenship for the more than 11 million illegal immigrants living in the U.S. That question is expected to be the most contentious in the legislative fight looming in Congress.

Otherwise, it's precisely the message that many people on both sides of the issue had expected to hear.

"How could he encourage the bipartisan process without becoming a hostage to it?" says Frank Sharry, executive director of America's Voice, a pro-immigrant group. "He faced a pretty difficult tactical decision on whether he was going to introduce his own bill or stay back and respect the legislative process. I thought he did a pretty good job."

The president endorsed the proposals unveiled Monday by a bipartisan group of senators that include a path to citizenship for those in the country illegally. He also joined the senators in calling for strengthened border security, a mandatory system for verifying workers' immigration status and "bringing our legal immigration system into the 21st century" with streamlined processes to handle future flows of newcomers.

Obama did warn lawmakers, however, that he'd "send up my own proposal and insist that they vote on it right away" if they steer negotiations on a bill into partisan gridlock.

Before Obama's speech, Republican Sen. Marco Rubio of Florida took to the chamber floor and urged the president not to go beyond endorsing the principles outlined by the group of bipartisan senators:

"We have now a very common-sense and reasonable set of principles, and I hope what the president will say today is that he hopes that that process succeeds. But if his intentions are to trigger a bidding war to see who can come up with the easiest process, this is not a good start."

Some of the issues Obama avoided will figure prominently in lawmakers' deliberations, such as the sensitive question about the length of time those in the country illegally could be forced to wait before applying for citizenship.

"Of course I wanted more," says Kica Matos, a spokeswoman for the pro-immigrant group Fair Immigration Reform Movement. "We want to hear, for those of us who have been working so hard for long time frames, specifics of the legislation, exactly how we're going to get at citizenship. But we're certainly heartened that the speech happened in the first place and that the president finally, in a very public way, is taking this on."

Another matter Obama sidestepped is a proposal offered by the senators that U.S. borders be secured before illegal immigrants can seek green cards. The proposal is favored by Republicans in Congress but is a major concern among pro-immigrant groups.

Tying green-card eligibility to border security isn't part of Obama's own plan, a distinction that Rubio later criticized in a statement reacting to the president's speech.

Critics also noted the president's decision to omit from his speech a provision in his plan to allow a foreign partner in a same-sex relationship to apply for a green card. The Senate plan doesn't include the provision. (Currently, only married opposite-sex partners can sponsor a spouse for a green card.)

"That would be a poison pill that would guarantee the whole thing would collapse," says Mark Krikorian, executive director of the Center for Immigration Studies, which advocates for limited immigration and stricter enforcement. "How could the Catholic Church and evangelical groups support that?"

Sen. Patrick Leahy, D-Vt., in a statement praised Obama's speech as "courageous." Leahy, chairman of the Senate Judiciary Committee, said he has scheduled the chamber's first hearing on immigration for Feb. 13, a day after Obama's State of the Union address.