Accessibility links
Rubio's Job: Play Second Fiddle To The President, And Don't Mess Up : It's All Politics The State of the Union address has always been a tough act to follow, no matter who delivers the opposing party's response. Since the first response was televised in 1966, it has often seemed doomed to be ignored and forgotten. 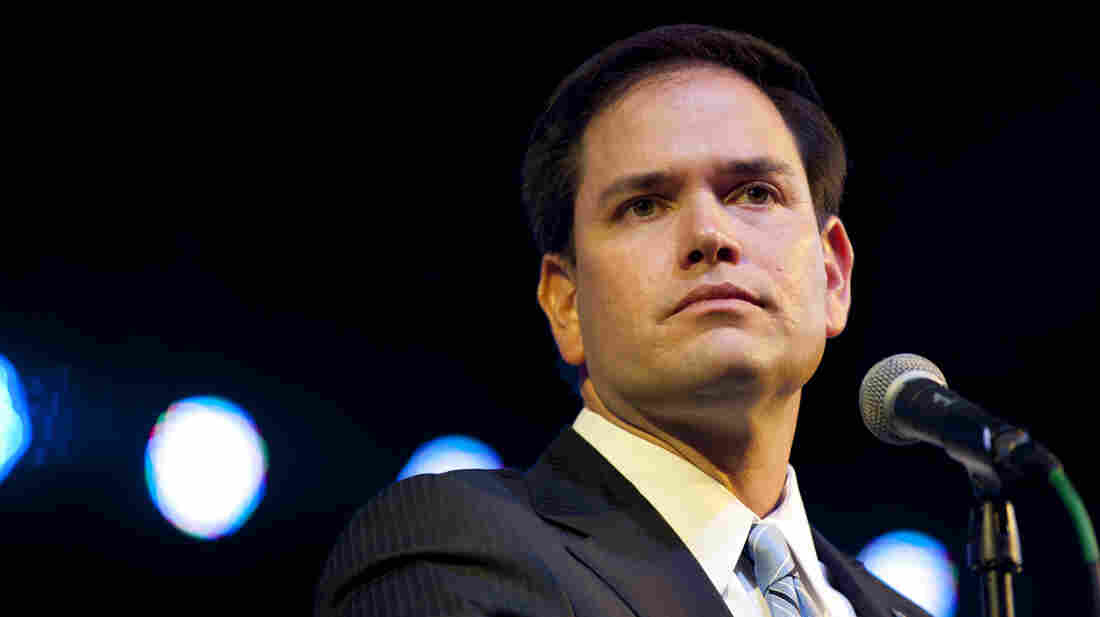 Sen. Marco Rubio, shown in November, has been chosen to deliver the GOP response to President Obama's State of the Union address on Tuesday. Michele Eve Sandberg/Corbis/AP hide caption 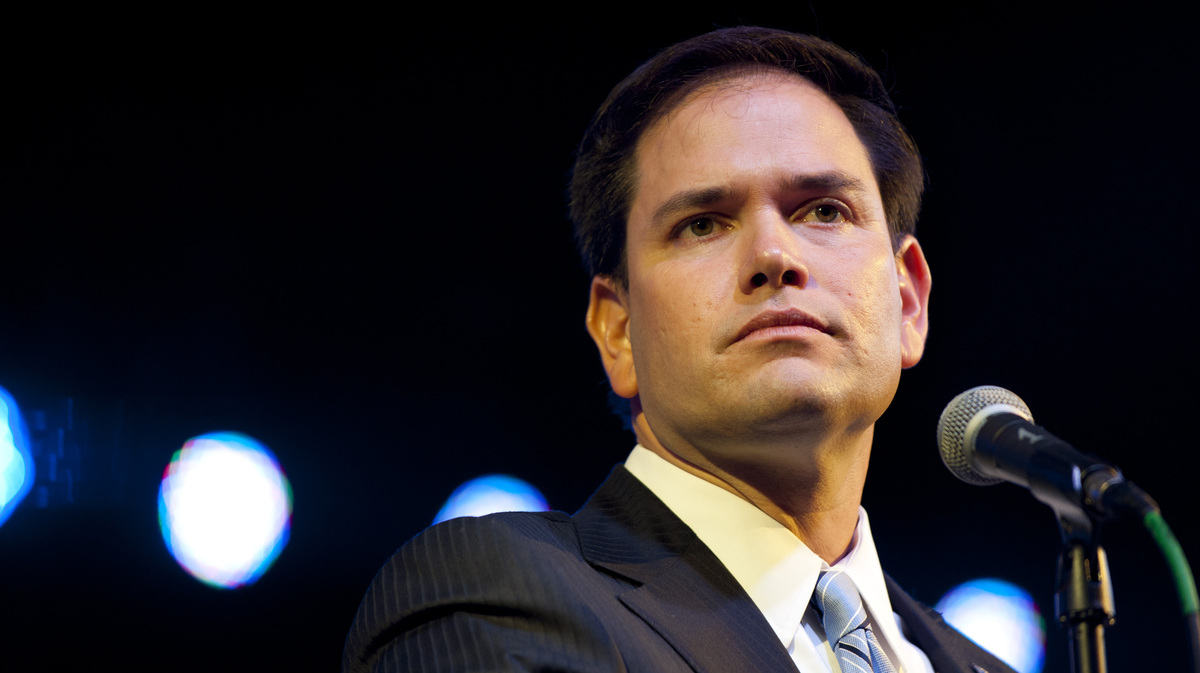 Sen. Marco Rubio, shown in November, has been chosen to deliver the GOP response to President Obama's State of the Union address on Tuesday.

Sen. Marco Rubio of Florida has been chosen to deliver the Republican response to President Obama's State of the Union address next Tuesday. And in a first, Rubio will deliver his speech in both Spanish and English.

But no matter who delivers the response or in what language, the State of the Union address has always been a tough act to follow.

Yet that hasn't stopped people from trying.

The first televised response to a presidential State of the Union message came in 1966. It was not an immediate answer. Sen. Everett Dirksen of Illinois and Rep. Gerald Ford of Michigan waited five full days to deliver the Republican rebuttal to Democratic President Lyndon Johnson. 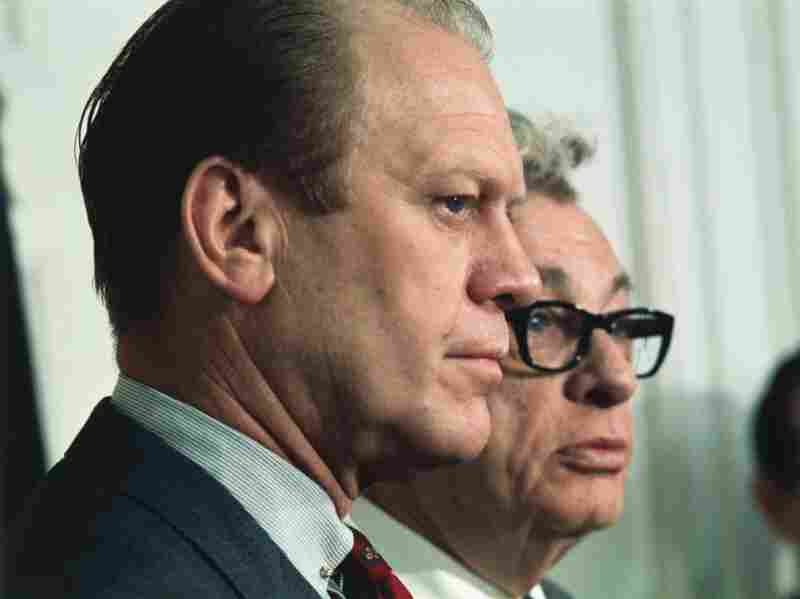 Sen. Everett Dirksen and then-Rep. Gerald Ford, shown in 1969, delivered the first televised response to the State of the Union address in 1966. Bettmann/Corbis/AP Images hide caption

Dirksen focused on foreign affairs, mellifluously offering support to Johnson on the biggest foreign policy question of the day, the growing U.S. involvement in Vietnam.

"Let it be intensified if necessary, as sound military judgment dictates there is, after all, no substitute for victory," he said.

Ford's job was to rebut the president's domestic policies, which he did while sounding a familiar GOP theme: "The executive branch has become a bureaucratic jungle, and time has come to explore its wild growth and cut it back."

Ford and Dirksen's response was delivered before an audience of Republicans in the old Senate chamber — a template for future State of the Union responses, which more often than not have been delivered by congressional leaders in the Capitol.

In 1974, then-Senate Majority Leader Mike Mansfield responded to President Richard Nixon with the cloud of a major scandal overhead. "The question of impeachment and the matters of the Watergate hearings create onerous responsibilities for the Congress," said the Montana Democrat. "They are also inescapable responsibilities."

The State of the Union response itself has at times seemed an inescapable responsibility — doomed to be ignored and forgotten.

Jeff Shesol, who was a speechwriter for President Bill Clinton, says following the State of the Union is near impossible.

"This is the big one. This is the one that gets the Super Bowl buildup. And then you cut to someone else, who is not president of the United States, in a room somewhere giving a speech that is shorter and smaller in probably every respect," he says. "So the dynamics of the moment are always going to cut against the person or people delivering the rebuttal."

In the 1980s, Democrats had the thankless task of following the Great Communicator himself, President Ronald Reagan. Twice they sent out House Speaker Jim Wright and Senate Majority Leader Robert Byrd, who were of Reagan's generation, yet seemed to speak for an even older era.

"We still marvel at what we've achieved when government has been both America's sail and her keel, when we have driven ahead but stayed clear of the shoals," Byrd said in one response.

Democrats debuted a new wrinkle in their 1985 response to Reagan, showcasing politicians from outside Washington. The first of these was a young governor from Arkansas, Bill Clinton.

"We have a new list of strong Democrats to lead the way — bold leaders who are building bridges to the 21st century," the future president said.

Shesol, the former Clinton speechwriter, says who is chosen to deliver the response is often meant to send a message.

"Often opposing parties will try to take the discussion out of Washington so that they can run in the next election as Washington outsiders," he says.

Christie Todd Whitman gave the 1995 response from the Statehouse in New Jersey after being elected governor. In 2009, Louisiana Gov. Bobby Jindal gave the response to the new President Obama from the governor's mansion in Baton Rouge.

"As a child, I remember going to the grocery store with my dad," Jindal said. "Growing up in India, he had seen extreme poverty. As we would walk through the aisles, looking at the endless variety on the shelves, he would tell me, 'Bobby, Americans can do anything.' I still believe that to this day."

Jindal's speech did not give his own career much of a boost.

This year, Rubio — also the son of an immigrant — will have to make his party's case to voters after a disappointing election. For Rubio, as for others before him, the honor comes with a cautionary note: First, do no harm.