Accessibility links
Fixing Long Lines At The Polls May Be Harder Than You Think : It's All Politics President Obama is expected to once again address Election Day problems in his State of the Union address, this time with some possible solutions. But some worry that involving Congress will just make things worse. And one MIT professor says it's not yet clear what would fix the problem. 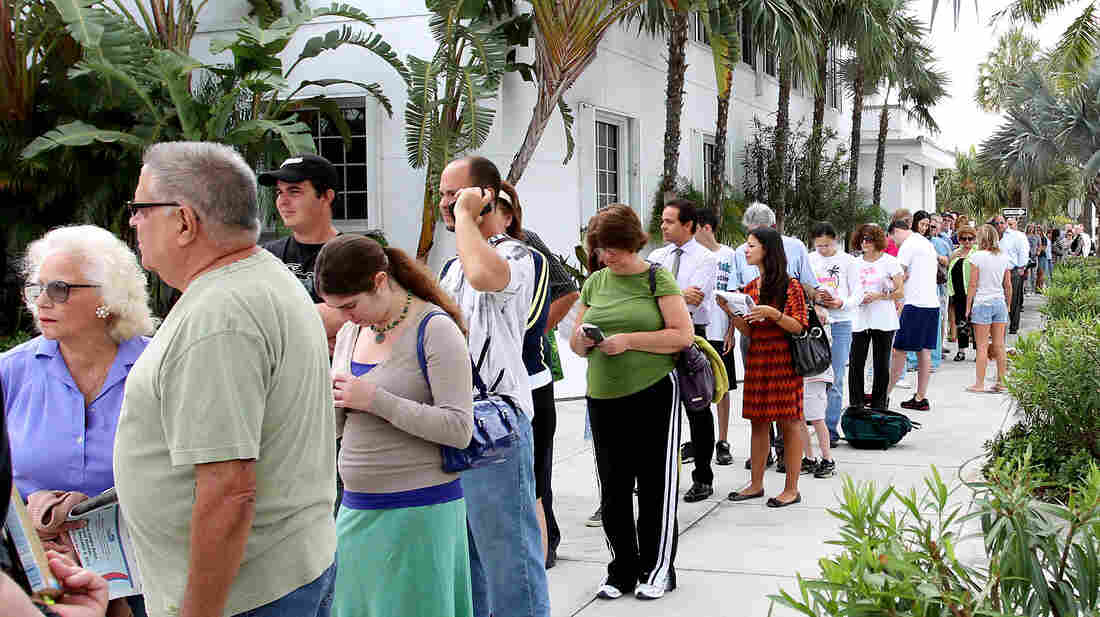 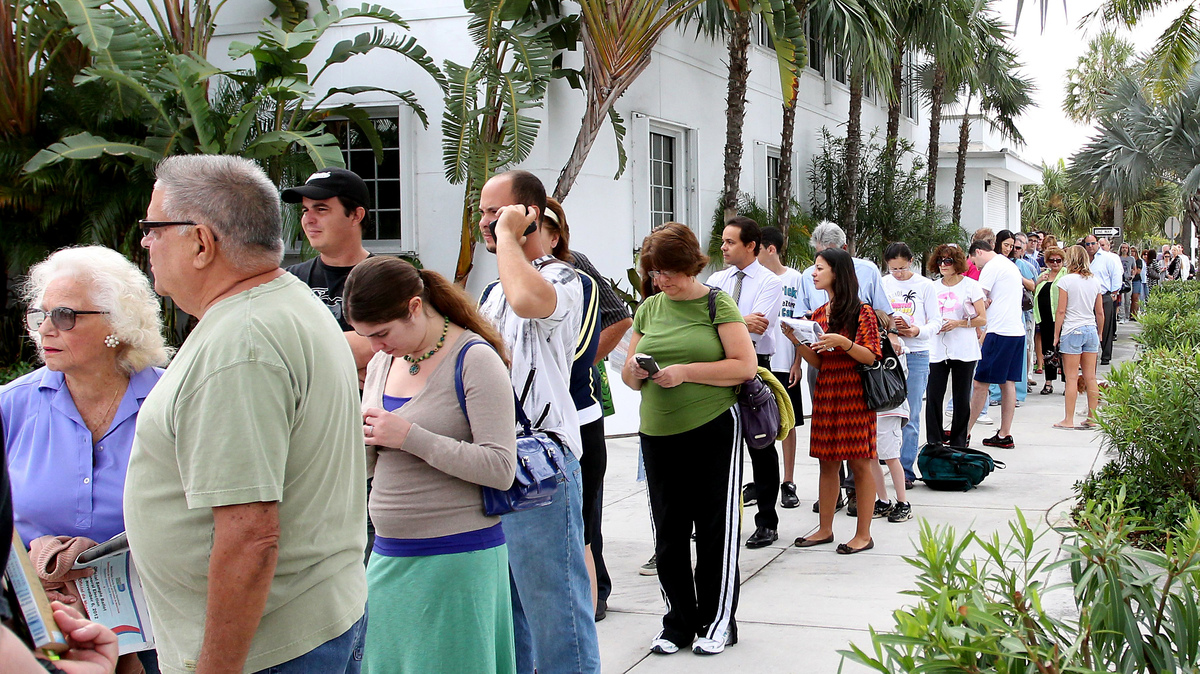 People wait to vote on Election Day in November at the Surfside Town Hall in Miami.

Minutes after he was re-elected in November, President Obama vowed to fix the long lines that many voters faced at the polls. He mentioned the problem again in his inaugural address. And now, the president is expected to raise it once more in the State of the Union address on Tuesday — this time with some possible solutions.

When Obama made his initial vow after midnight on election night, some Miami polling places had just closed — after voters stood in line for six, seven, even eight hours to cast ballots. There were similar waits at other polling sites in Florida and elsewhere.

"For me, who voted in the state of Maryland, I was in line for seven hours," says Judith Browne Dianis, co-director of Advancement Project, a leading voting-rights group.

Today, not all Americans have equal access to the polls, she says. "We have 13,000 election jurisdictions that run elections 13,000 different ways," she says. "That is what we have to fix."

So her group and others hope the president, in his State of the Union address, will push for some national election standards — things such as a minimum number of early-voting days and rules on how to count ballots.

The White House and the Justice Department have been studying the options, which also include improving voter registration systems.

Lawrence Norden of the Brennan Center in New York, which has been working on the issue, says 1 in 8 registration records is inaccurate.

"Registration doesn't follow people when they move, even though a lot of people think it does," he says. "And the result of that is people show up to the polls and poll workers can't find their names in the poll books."

That can lead to confusion and delay. Norden notes that by one estimate, 200,000 Florida voters, discouraged by long lines, didn't vote last November.

"Obviously, in close elections that can have a real impact," he says.

But some proposed solutions are already facing strong Republican opposition. Legislation introduced by House and Senate Democrats last month would require states to provide at least 15 days of early voting, to register some voters automatically, and to allow voters to register on Election Day.

At a recent forum at the conservative Heritage Foundation, South Dakota Secretary of State Jason Gant said his state didn't have long lines and doesn't need the federal government telling it what to do.

"We don't want to turn over the running of our elections to some bureaucrats in Washington," he said. "We want to keep that at the local level with local elected officials."

He and other secretaries of state note that they're already working together to deal with inaccurate and outdated registrations. Many are sharing voter rolls to help identify duplicates. And more than a dozen states — as politically diverse as Arizona and New York — have adopted online registration to make it easier and more accurate.

Doug Chapin, an election expert with the University of Minnesota, worries about the impact of a partisan national fight on these often bipartisan state efforts.

"In some ways, any effort in Congress is going to be in competition with and maybe sometimes in conflict with what's going on in statehouses across the nation," he says.

And there's another problem, says Charles Stewart of the Massachusetts Institute of Technology. He's done some of the only available research on voting lines.

"The more I look at it right now, the more I believe we don't really know the answers," he says.

Stewart says it's not at all clear what causes long lines. He thinks better registration systems will help, but he's not convinced that more early voting will ease the wait on Election Day. That could just as easily be the result of too few places to vote.

And that will be long after the debate over possible solutions has begun.

A hint that Obama will address the issue Tuesday is included in the invited guests: Desiline Victor, a 102-year-old Florida woman who stood in line for three hours to vote last year, is expected to join first lady Michelle Obama for the president's speech.