Accessibility links
Obama To Congress: With Or Without You : It's All Politics President Obama called repeatedly on Congress to address issues of paramount importance to the country during his State of the Union address Tuesday. But he also made it clear that when Congress fails to act or agree with his policies, he intends to push ahead on his own.

Obama To Congress: With Or Without You

Obama To Congress: With Or Without You 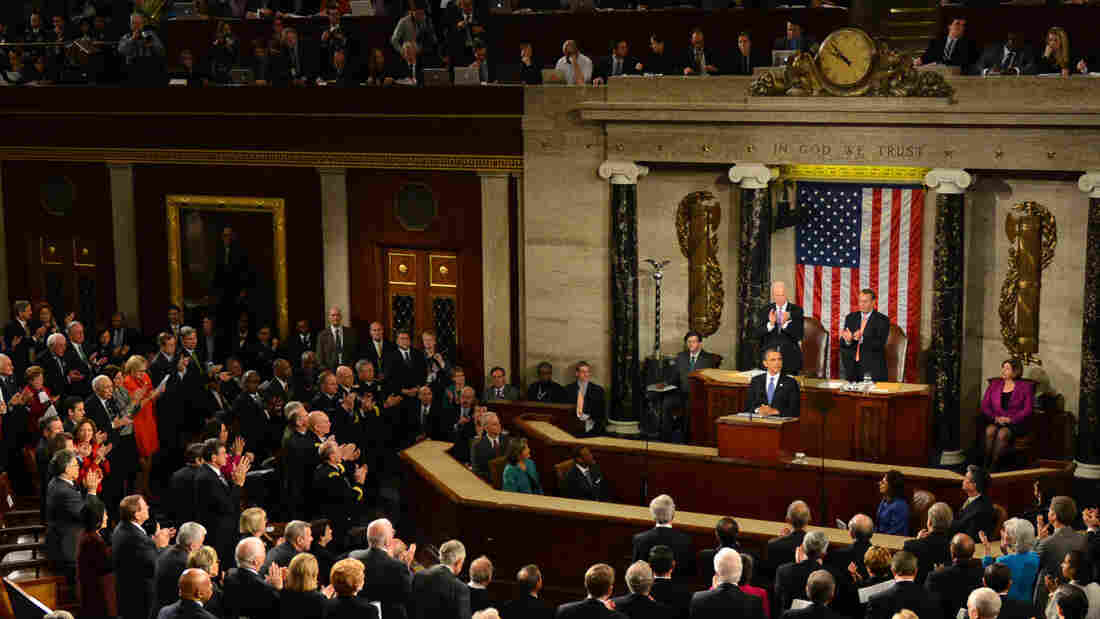 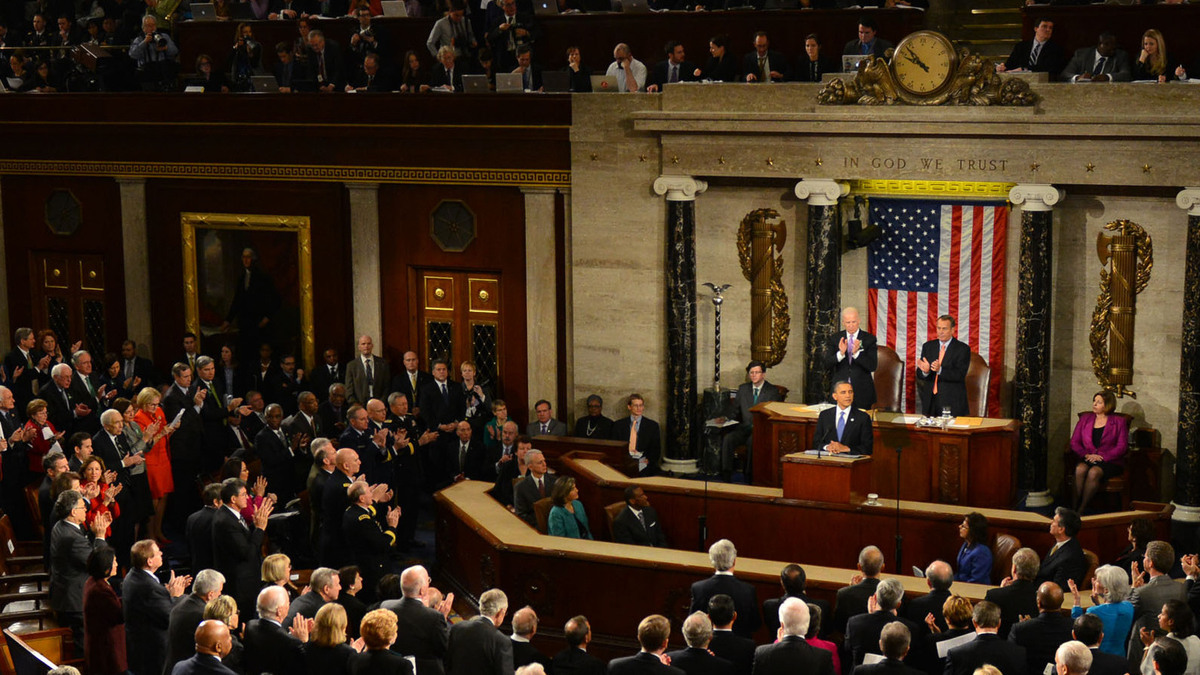 President Obama delivers his State of the Union address Tuesday night to a joint session of Congress.

President Obama called repeatedly on Congress to address issues of paramount importance to the country during his State of the Union address Tuesday. But he also made it clear that when Congress fails to act or agree with his policies, he intends to push ahead on his own.

As is traditional for a State of the Union speech, Obama called on Congress to send legislation to his desk addressing not just immigration, gun control and the budget but a range of policy areas including women's rights, industrial policy and relief for homeowners.

In this, his fourth such address, a recurring refrain from the president was an admonition that Congress needs to act — even if it's only to vote "no."

Americans "don't expect those of us in this chamber to agree on every issue," Obama said. "But they do expect us to put the nation's interests before party."

But Obama gave Republicans very little to cheer, insisting on keeping entitlement spending at robust levels and calling on the wealthy to pay more in taxes.

Knowing many of his ideas are likely to receive a familiar cold shoulder from a divided Congress, Obama announced that he would move forward on a number of fronts, if only on his own.

The president announced unilateral actions he had just taken through executive order or other means to address cyberwarfare, voting rights and climate change, among other issues.

"I urge this Congress to pursue a bipartisan, market-based solution to climate change," Obama said. "But if Congress won't act soon to protect future generations, I will."

Obama said little about what he intends to do to address climate issues, other than directing his Cabinet to find ways of reducing pollution and encouraging use of sustainable energy.

He applauded past legislation on the issue that was co-sponsored by Arizona Sen. John McCain, his Republican rival for the presidency in 2008.

In fact, Obama praised both his GOP opponents, noting that former Massachusetts Gov. Mitt Romney shared support for an idea to raise the minimum wage by linking it to the cost of living.

But despite calls for bipartisanship sprinkled liberally throughout his speech, Obama put forward few ideas that congressional Republicans are likely to support.

Although GOP leaders have said they will not support tax increases that go beyond those included in a budget package enacted last month, Obama said the nation could "save hundreds of billions of dollars by getting rid of tax loopholes and deductions for the well-off and well-connected."

Obama declared himself open to ways of finding savings in Medicare. But on Monday, White House Press Secretary Jay Carney stated flatly that the president won't support raising the age of eligibility for Medicare from 65, which is at the center of GOP ideas for reducing long-term health care costs.

"Our government shouldn't make promises we cannot keep," Obama said during his address to both chambers of Congress, "but we must keep the promises we've already made."

Where Will The Money Come From?

"Let me repeat: Nothing I'm proposing tonight should increase our deficit by a single dime," he said.

Obama said that policymakers have already shaved $2.5 trillion from projected deficit spending over the next 10 years.

In fact, over the short term, the budget news has gotten better recently. The size of the deficit for the current fiscal year is now projected to be at least $150 billion lower than previously expected. And the president did not point out that the Treasury Department actually ran a $3 billion surplus in January, thanks largely to increased Social Security revenues due to the end of a two-year reduction in payroll taxes.

But Obama counted as part of his $2.5 trillion savings some $1 trillion in cuts scheduled to take effect automatically through sequestration, beginning next month.

He called those across-the-board cuts "a really bad idea" but offered no indication of where he would find some other trillion dollars in savings, as Republicans have demanded.

As an unspoken acknowledgement of how tight money has gotten, Obama expressed hopes that many of his ideas would be carried forward by other actors — whether it was the states, which he called on to improve high school education, or the "private capital" he looks to for help in funding infrastructure.

Obama made clear that he intends to seek action from Congress on divisive social issues — namely, gun control and immigration.

Obama outlined three of the four main pillars of immigration legislation he and a bipartisan group of senators had separately outlined last month — better border security, an improved visa system to streamline legal immigration, and a way for 11 million undocumented immigrants currently believed to be in the country eventually to earn citizenship.

But Obama did not mention the issue of how to penalize employers who knowingly hire undocumented workers.

In what may have been the most emotional portion of his speech, Obama called on Congress to vote on a package of proposals meant to reduce gun violence.

He told the story of Hadiya Pendleton, a 15-year-old Chicago girl who was killed a week after taking part in inauguration activities last month. Her parents sat beside first lady Michelle Obama, while "more than two dozen Americans whose lives have been torn apart by gun violence," as the president said, sat elsewhere in the chamber as guests of members of Congress.

Numerous lawmakers, as well as Vice President Biden, wore ribbons signifying solidarity with victims and survivors of the December attack at a school in Newtown, Conn., and other shootings.

But many of Obama's gun control proposals remain highly controversial. Some, such as a renewed ban on assault-style weapons, are thought to have limited prospects for passage. Obama didn't explicitly mention a ban in his speech.

The Senate Judiciary Committee on Tuesday held a second hearing on gun violence, while a bipartisan group of senators has been working on legislation to expand background checks on gun purchasers.

Obama announced that 34,000 American troops will come home from Afghanistan this year, continuing his long-expected phase-out of the active U.S. military presence there. He said more than a decade of war will have achieved the desire of decimating the core of al-Qaida but promised the U.S. would not abandon Afghanistan or the cause of counterterrorism.

"Today, the organization that attacked us on 9/11 is a shadow of its former self," he said.

But Obama said he would not engage in large-scale military operations to address the "evolving" danger of terrorism. "To meet this threat, we don't need to send tens of thousands of our sons and daughters abroad or occupy other nations."

The president did say he would remain vigilant against nuclear proliferation, condemning North Korea for its nuclear test Monday and saying the U.S. would block Iran from attaining a nuclear weapon, while working with Russia to further reduce nuclear arsenals.

Without explicitly referencing drone strikes, which have engendered controversy in recent days, Obama said he would work with Congress to allow greater transparency in the administration's targeting of terrrorists.

"I recognize that in our democracy, no one should just take my word that we're doing things the right way," Obama said.