Accessibility links
Hagel's Nomination Sidelined In Senate Stalling Action : It's All Politics Chuck Hagel's nomination to become defense secretary came just short of the required 60 that would have allowed it to proceed to a final vote. The vote, largely along party lines, was 58 to 40, with one senator voting present. Further action is expected later in February. 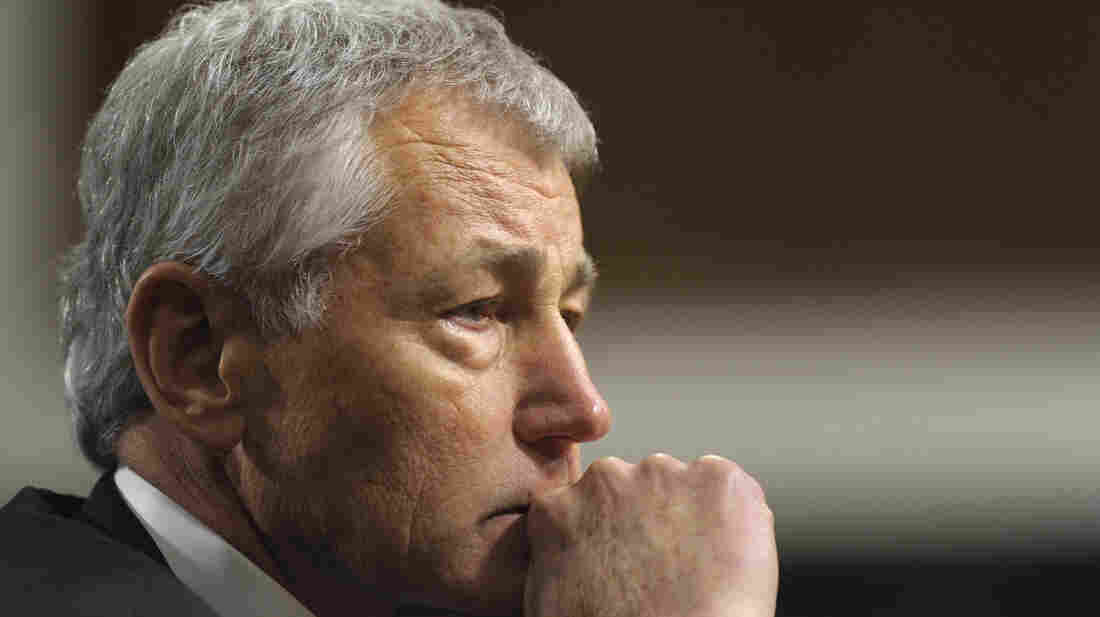 Thursday brought the latest twist in the saga of Chuck Hagel's nomination to be President Obama's second-term defense secretary.

Hagel's nomination came two Senate votes short of the required 60 that would have allowed it to proceed to a final vote. The vote, largely along party lines, was 58 to 40 with one senator voting present.

Four Republicans voted with Democrats to end debate and proceed to a final vote. They were Mike Johanns of Nebraska, Thad Cochran of Mississippi, Susan Collins of Maine, and Lisa Murkowski of Alaska.

"Just when you thought things couldn't get worse, it gets worse" said Sen. Harry Reid, D-Nev., the majority leader. Reid said he planned to schedule another procedural vote for the week after next to try to advance Hagel's nomination to a final vote.

Reid and other Democrats insisted that the Republicans had filibustered the Hagel nomination, the first time a defense secretary has had his nominations stalled in such a way.

Republicans insisted they hadn't filibustered the nomination. "This is not an attempt to kill this nomination," said Sen. John Cornyn, R-Texas, the Senate minority whip. "It's not a filibuster." Cornyn said some Republicans were merely seeking more time to have additional questions answered.

Although Hagel had drawn immediate early opposition, it had looked for many weeks that while many Republicans would vote against Hagel's confirmation, no one would actively try to block it.

Among the Republican senators reportedly open to at least allowing Hagel's nomination to receive an up-or-down final vote — so long as it comes after the recess — are Lamar Alexander of Tennessee and Lindsey Graham of South Carolina. In a final post-filibuster floor vote, Hagel would need only 51 votes to be confirmed.

Senate Republicans have argued that before a floor vote on his nomination happens, Hagel needs to answer more questions about speeches he has given since leaving the Senate in 2009, including to an Arab-American group. They've also raised questions about his financial dealings, queries which Senate Democrats say are unjustified.

Meanwhile, Senate Republicans have expanded the questions they want answered before they allow a vote on Hagel. Some questions for the administration center on an issue unrelated to Hagel: the Sept. 11, 2012, Benghazi attack on the U.S. Consulate and its aftermath. The attack led to the deaths of Ambassador Chris Stevens and three other Americans.

For President Obama's choice to become defense secretary, first came the flaying, then the filibustering.

It wasn't that much of a surprise that Senate Republicans on Wednesday refused to end debate on Chuck Hagel's nomination, forcing Senate Majority Leader Harry Reid, D-Nev., to try to find 60 votes to move the nomination forward to a final vote.

Some Senate Republicans, after all, have been telegraphing that a filibuster was a very real possibility. That was after they pummeled Hagel, a Nebraskan who once counted himself among their number, during a grueling confirmation hearing.

They were displeased with Hagel for any number of reasons: He had gone from supporting to opposing the Iraq War and surge during the George W. Bush administration. He was too soft on Iran and too hard on Israel, they said. And Hagel didn't help himself at the hearing when he often came across as unfocused.

Hagel's nomination made it out of the Senate Armed Services Committee Tuesday on a straight party line vote, another ominous sign.

Then on Wednesday afternoon, Reid announced he was filing a cloture motion, Senate-speak for an attempt to end a filibuster. He couldn't reach agreement with Sen. James Inhofe, the Oklahoman who is the top Republican on the Armed Services panel, to end debate.

Among Inhofe's stated concerns about Hagel, he has said, is that the Iranian Foreign Ministry supports his nomination. Sen. Carl Levin, the Michigan Democrat who is the committee's chairman, has suggested that perhaps the Iranians are being bomb throwers and trying to cause mischief in American policy circles.

In any event, Reid has scheduled the vote to end the debate for Friday unless an agreement is reached beforehand.

"This is the first time in the history of our country that a presidential nominee for secretary of defense has been filibustered," Reid said Wednesday on the Senate floor. "What a shame. But that's the way it is."

The Democrats who control the Senate have 55 votes they can count on, a number that includes the Senate's two independents. And two Republicans have said they will vote for Hagel, Mike Johanns of Nebraska and Thad Cochran of Mississippi. But that still leaves Reid three votes short of the 60 needed to end a filibuster. And it's unclear where the other three votes come from.

Even Sen. Susan Collins of Maine, the closest thing to a moderate in the Senate Republican caucus, said on Wednesday that she would be voting against Hagel.

This keeps alive the possibility that Hagel might not be confirmed.

If the Hagel nomination goes down, that would leave the president with two options. He could find a nominee more pleasing to Senate Republicans than the former Senate Republican now before them.

Or he could go the John Paul Jones route, tell Senate Republicans he has not yet begun to fight, and send them another nominee who would get their hackles up.