Accessibility links
Republicans Make 'Benghazi' A Frequent Refrain : It's All Politics Republicans delayed a vote on President Obama's defense nominee, saying they wanted more answers about the attack in Benghazi, Libya, last year. In recent months, Benghazi has become a sort of catchword. To Republicans, it symbolizes everything bad about the Obama administration. 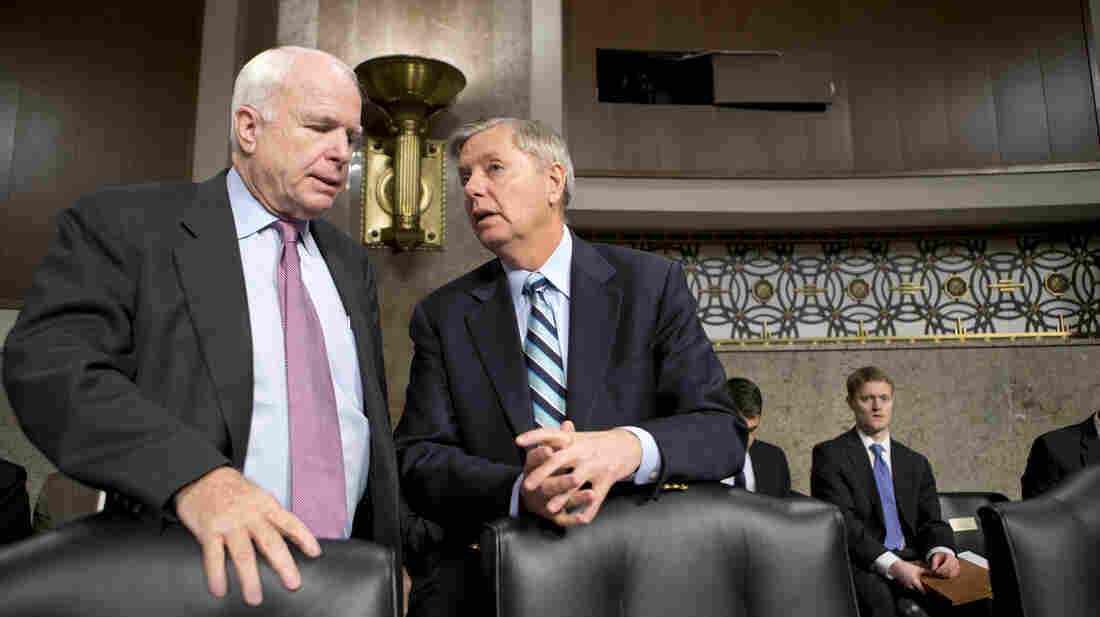 Sens. John McCain, R-Ariz., and Lindsey Graham, R-S.C., confer at the start of a Senate Armed Services Committee hearing last week on the appointments of military leaders. McCain and Graham have been among the Republicans pushing the Obama administration for answers about the Benghazi attack. J. Scott Applewhite/AP hide caption 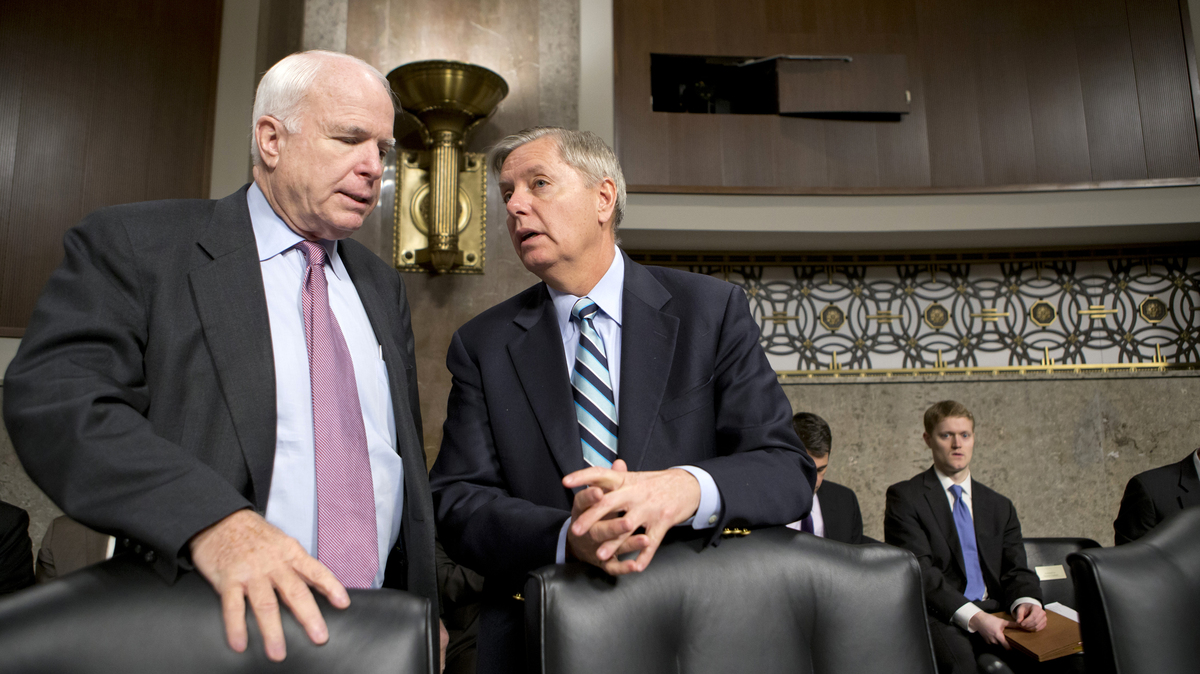 Sens. John McCain, R-Ariz., and Lindsey Graham, R-S.C., confer at the start of a Senate Armed Services Committee hearing last week on the appointments of military leaders. McCain and Graham have been among the Republicans pushing the Obama administration for answers about the Benghazi attack.

The White House hopes the Senate will confirm Chuck Hagel next week as defense secretary.

Republicans delayed the vote for the same reason they scuttled Susan Rice's bid to be secretary of state: Benghazi.

The attack on the U.S. Consulate in Benghazi, Libya, last September killed four Americans, including the ambassador to Libya. And Benghazi has since become a rallying cry for Republicans.

On Tuesday night in Rock Hill, S.C., Republican Rep. Mick Mulvaney met with his constituents. When he opened the floor for questions, one man brought up Benghazi, and Mulvaney spoke about it with passion.

"There were times in our nation's past where, if our ambassador was killed, it was cause for going to war," he said. "We're treating it like it was a cause to, you know, go down and order a pizza. And that's just not — that's not right."

Mulvaney mentioned the president, and someone in the audience shouted: "Impeach him."

Mulvaney responded: "Everybody says, 'Now, wait a second, what are you guys going to do about impeachment?' Now remember, OK, this is not an impeachment discussion. You don't get impeached for having bad judgment."

Benghazi has become a sort of catchword. To Republicans, it symbolizes everything bad about the Obama administration. It's not the first word to fill that role. At the start of the president's first term, it was Obamacare. Later, Solyndra.

Now Benghazi helps Republicans raise money, fire up the base and take a whack at the guy in charge. And in this case, unlike with Obamacare or Solyndra, the administration acknowledges it screwed up.

"We need to make sure that never happens again," says Tommy Vietor, a White House spokesman. "We all have a role in this. And when the focus gets politicized — when words like 'cover-up' are used, when we're focused only on talking points, not what do these individuals need to keep them safe — that's when I think we kind of miss the runway."

Beyond the pressure cookers of Congress and AM talk radio, even many Republicans agree that the debate over Benghazi has moved away from substance into a political hall of mirrors.

"I missed the meeting among Republicans where it was decided this would become an angry cause célèbre that should be pursued at all costs and with no holds barred," says Republican strategist Ed Rogers.

Juan Zarate, who was a counterterrorism adviser to President George W. Bush, says people could be asking meaty questions about the nature of the evolving terrorist threat, but they're not.

"I think it's been substance that's lost amidst the debate about talking points and the way that the administration portrayed the incidents in the early days after the attacks," Zarate says.

There was a substantive investigation into the attacks. Retired Ambassador Thomas Pickering co-chaired the independent commission. The State Department accepted all of his recommendations. One employee resigned, and three were placed on administrative leave. That was two months ago.

Now, Pickering says, the Benghazi debate is in a new chapter.

"The political questions will obviously continue as long as people feel there's political mileage to be made of them," Pickering says.

When asked if that's par for the course in Washington, Pickering says, "I think this is quite unusual. This is the first time that this kind of a review has been so politicized."

One reason for the politicization is that the attack took place in the final weeks of a presidential campaign — but the election was three months ago. And still the Benghazi drumbeat continues, after 10 congressional hearings and many more staff briefings.

Tad Devine, a Democratic political consultant, points out that for the first time in decades, Republicans trail in polls on foreign policy and national security. "And I think they see an opportunity here to try to diminish the president on one of his strongest suits."

Republican strategist Rogers fears it could be having the opposite effect.

"I think there is Benghazi fatigue — a lot of conscientious followers of the news that are somewhat bewildered by why this issue has lingered," he says.

But data from the Pew Research Center suggest not every voter is following this story equally.

In November, Pew found that Republicans were twice as likely to follow Benghazi closely as Democrats or independents.

That could be because conservative media hammered the story nonstop. But the discrepancy suggests that this rallying cry could be effective at ginning up the base without driving away people on the other side, who may not be paying attention.

In the audio of this story, as in a previous Web version, we say the State Department fired four employees. The employees were not fired. One resigned; the other three were placed on administrative leave.