Accessibility links
Meet The Virginian Shaping The House GOP's Immigration Plan : It's All Politics Republican Rep. Bob Goodlatte is charged with drafting the House immigration bill. He is against a path to citizenship for unauthorized immigrants but says the "broken" system needs work. And he says President Obama "should calm down, back off and let the Congress do its work." 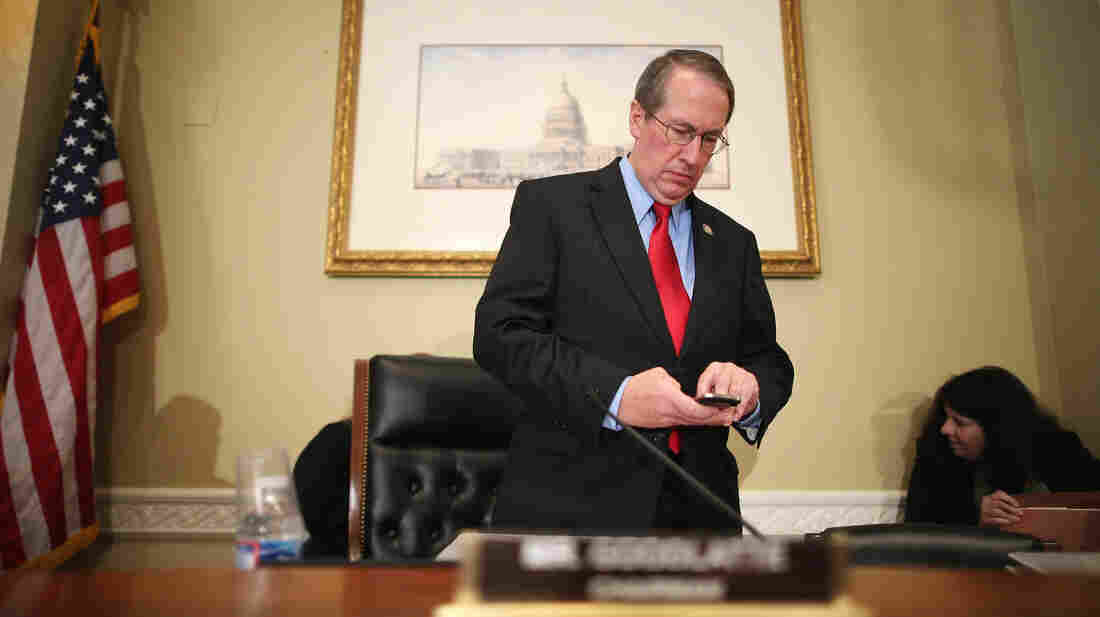 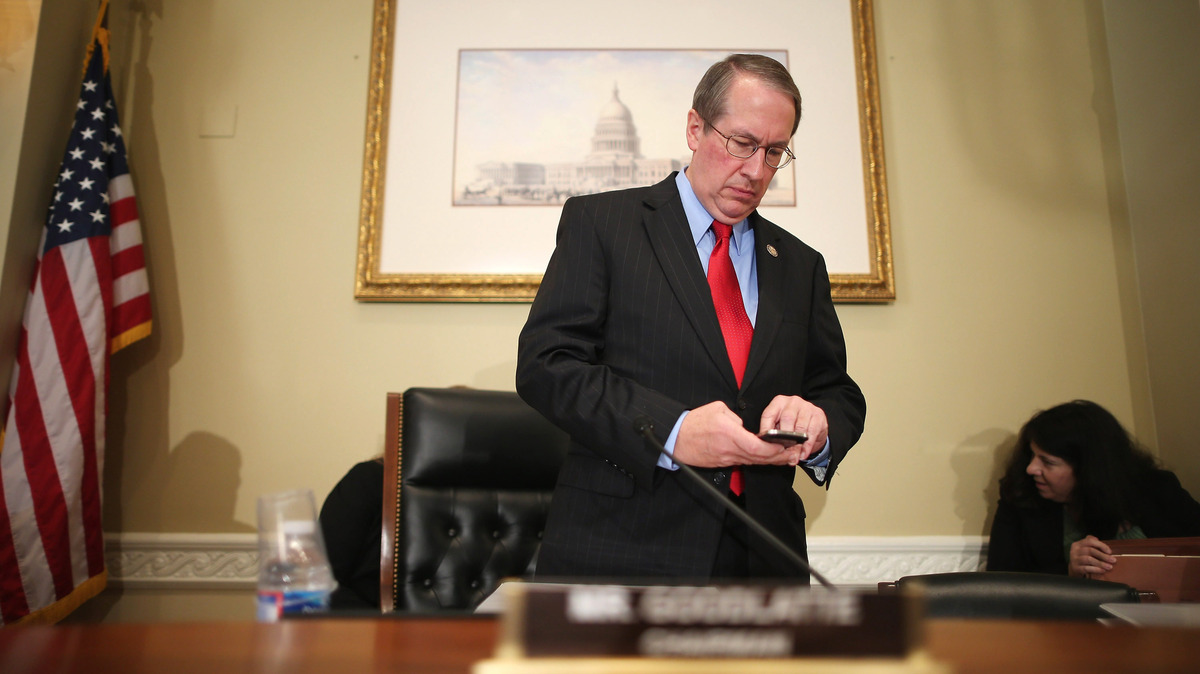 Rep. Bob Goodlatte, R-Va., checks his phone before a hearing on Capitol Hill in September.

Comprehensive immigration reform seems to top everyone's legislative wish list this year, and bills are already taking shape in the White House and the Democratic-led Senate.

A bipartisan group of senators recently laid out a path to citizenship for millions living in the country unlawfully. Less clear is where the Republican-led House is headed on immigration.

The man charged with drafting the House immigration bill is Judiciary Committee Chairman Bob Goodlatte, a Republican from Virginia.

Goodlatte's district is home to Roanoke, Va., a tidy city of nearly 100,000 between the Allegheny and Blue Ridge mountains. In recent years, immigrants from more than 70 nations have settled there and elsewhere in the Shenandoah Valley — some working in apple orchards, many others in poultry-processing plants and still others in construction or the restaurant business.

House Gears Up For Immigration Battle

At a gathering this week in downtown Roanoke, local business people offer varied views when asked what should happen with the millions of immigrants who are in the country unlawfully.

"We use Mexicans in our work," says building contractor Ed Toomey, "and, you know, they're fine people. But there has to be a law. They have to abide by the rules, like everybody else."

Realtor Cindy Sanchez says it's not for her "to judge them."

"The people that I come across, I know they're here because they want a better life for their family," she says.

Mike Sutton, a real estate agent who favors some form of amnesty, calls it "a tough issue."

"But I would like to see ways that we could figure out how to get them — go through some steps to make them legal," he says.

During the gathering, the business people are joined by another local — Goodlatte, who is well-known, having represented this district for more than two decades.

Closing The Door On A Path To Citizenship

When the Republican conservative and former immigration lawyer sits down for an interview to discuss the bill he aims to produce, he makes one thing clear: He is against a path to citizenship for unauthorized immigrants.

"This is a broken immigration system; it's had problems for a long time," he says. "And work needs to be done, both in terms of reforming legal immigration programs and in terms of enforcing our immigration laws and addressing what happens to the 10 million or more people who are not lawfully in the United States."

"People have a pathway to citizenship right now: It's to abide by the immigration laws, and if they have a family relationship, if they have a job skill that allows them to do that, they can obtain citizenship," Goodlatte says. "But simply someone who broke the law, came here, [to] say, 'I'll give you citizenship now,' that I don't think is going to happen."

It annoys Goodlatte that President Obama has been weighing in on the immigration debate.

"I think the president should calm down, back off and let the Congress do its work," he says.

What's really required to get an immigration bill, he says, is bipartisan cooperation.

"If people start prescribing or prejudging how we're going to find that common ground in the middle, he's going to simply not have a bill," Goodlatte says.

A top objective for Goodlatte is to expand a guest-worker program for immigrant-labor-dependent U.S. agriculture, should millions already here illegally be allowed to stay.

"You're going to have to have a program that assures those farms and those processing plants that there will be workers," he says. "Because if you give them legal status, they can work anywhere in the United States — they're not going to necessarily work at the hardest, toughest, dirtiest jobs."

Those who have watched Goodlatte over the years say he should have considerable political leeway at home for drafting an immigration bill.

"I don't think immigration is a real core issue in this district," says Harry Wilson, a political scientist at Roanoke College, "so I don't think it's a do-or-die issue for him. [It] may be one of some importance, but it's not one where he's likely to lose the next election based on what he does."

But it would appear that even in Goodlatte's mostly rural, mountain-bound district, people do want him to do something about an immigration system that all agree is broken.