Accessibility links
A User's Guide To Washington Jargon : It's All Politics If you can't tell what politicians in Washington are talking about, you're not alone. But eventually terms such as "sequester" and "reconciliation" can become less impenetrable, if only because of their constant repetition.

A User's Guide To Washington Jargon

A User's Guide To Washington Jargon 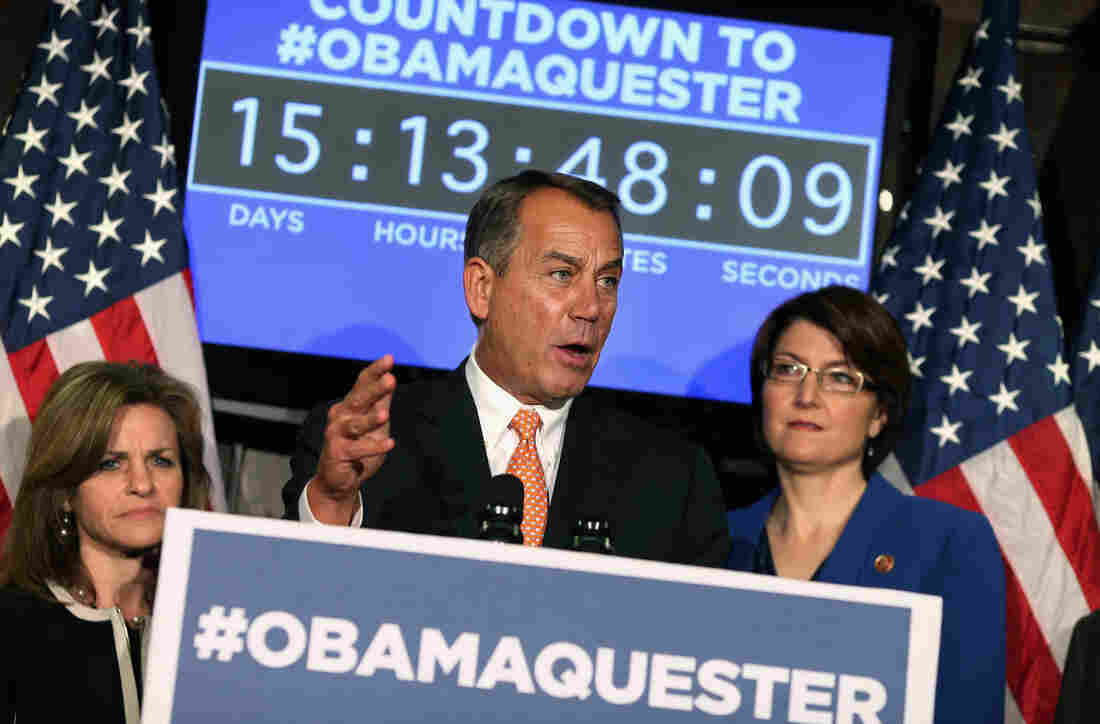 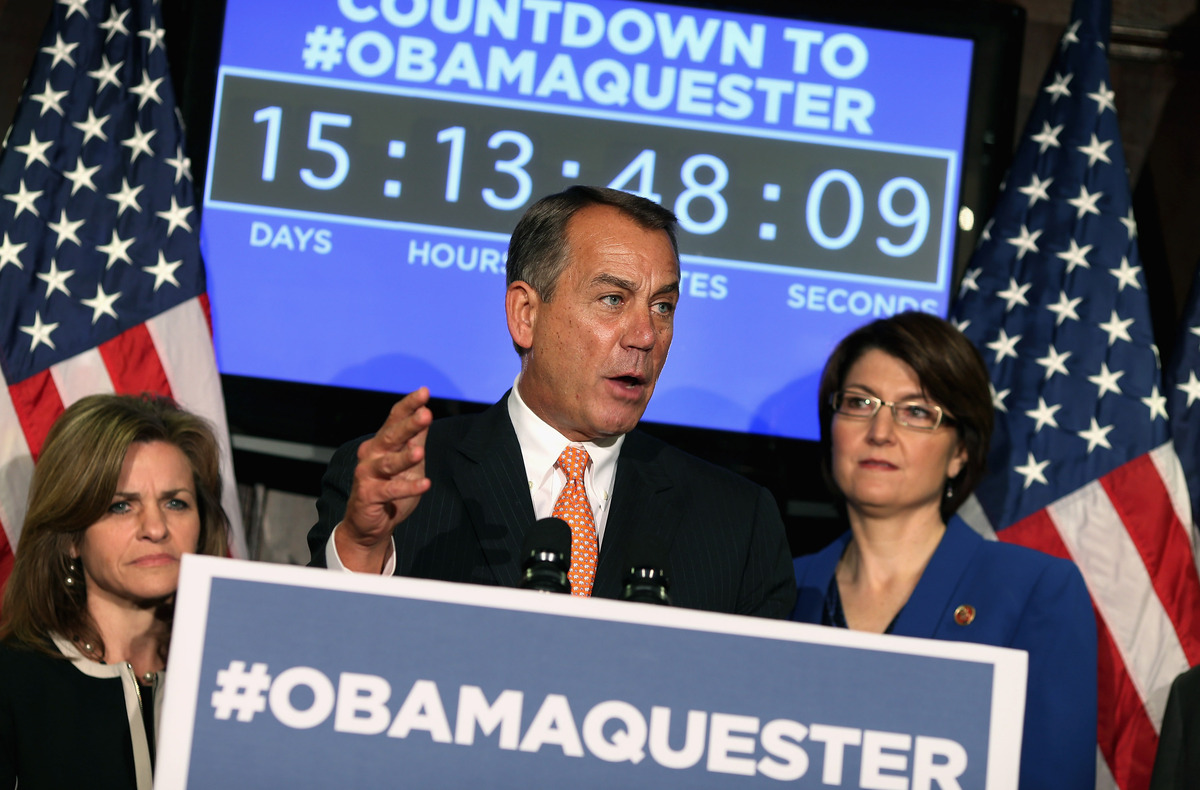 It's not as elegant as some languages, but neither is it as impenetrable as, say, an economics textbook or the iTunes user agreement.

"We have our own language on Capitol Hill," says Don Ritchie, head of the Senate Historical Office.

That language — the budget terms and political euphemisms that fly freely through the air in Washington, D.C. — often ends up seeping into the nation's discourse.

Reporters and bloggers pick up and spread terms such as "sequester" and "debt ceiling limit." The next thing you know, you just might find yourself using such jargon as you talk with friends about what a mess the country is in. But most people understandably might not be able to tell a COLA from a COBRA. It's primarily Beltway insiders who speak fluent acronym.

"Politics, like any other field, has its own language, its own jargon," says Martin Medhurst, a professor of political science and rhetoric at Baylor University. "It would be an odd field that didn't."

Conference
A) A meeting you hope to sneak out of to play golf.
B) The way the House and Senate align different versions of legislation.

Impoundment
A) What happens to your car after it gets towed.
B) A power presidents had not to spend funds approved by Congress, up until 1974.

Message
A) Something that pops up on your phone.
B) Any thought or idea expressed briefly in a plain or secret language and prepared in a form suitable for transmission by any means of communication.

Oversight
A) Something that has been overlooked.
B) Increased attention to an issue, say, the Benghazi killings.

Reconciliation
A) The course your marriage counselor hopes you'll take.
B) A procedure for matching new budget policies with existing law.

Answers: (B) in every case. The definition for "message" is official Defense Department language. "Oversight" is a trick question, because (B) is correct on Capitol Hill while (A) is correct everywhere else.

With billions of dollars typically at stake in your average Washington debate, it's worth getting some grasp on the terms that make up and shape the discussion.

Washington's current favorite word — sequester — came from a 1985 budget act named, as many laws are, after its chief sponsors, Gramm-Rudman-Hollings. The term referred to a mechanism set up to cut spending automatically if deficit targets weren't reached.

The legal term "sequestration" was chosen at the time specifically because it sounded neutral, mainly because it hadn't been used before, says budget expert and consultant Stan Collender.

It didn't sound as bad as other contenders, such as "quarantine."

"They came up with 'sequester' because it had not taken on any particular baggage," Collender says.

Now that it has caught on, though, sequester has become something of a scare word — code for all kinds of terrible impending cuts to essential programs. It's "brutal" and a "meat cleaver," or so President Obama said this week.

This often happens during political debates. A term is adopted as shorthand for a big argument over budget priorities or health care, and then it takes on all sorts of connotations.

Sometimes this is intentional. Clever lawmakers try to come up with terms that are potent enough to influence the debate: substituting "death tax" for estate tax, for example; or referring to modern rifles as "assault weapons."

"Either they're deliberately crafted because their meaning has been pretested, or they're recognized by the press pickups or blogosphere to have some resonance," says Marsha Lindsay, a branding consultant in Madison, Wis.

The habit of speaking in loaded terms and acronyms can become ingrained, which can be embarrassing when politicians return to their districts and talk to constituents who don't speak Washingtonese.

"One of the biggest problems members of Congress have is that they go home and they use terms like 'sequestration' and 'reconciliation,' " Collender says. "They're trying to explain Washington, and they sound like they're part of the problem."

Perhaps the most notorious example of this was during the 2000 presidential debates, when Democrat Al Gore was widely mocked for talking about a "lockbox" for Social Security funds and challenging Republican George W. Bush over the "Dingell-Norwood bill," which addressed managed care.

"What comes across when you're watching the debate is this guy from Washington doing Washington-speak," news analyst Cokie Roberts said on ABC.

No Taxation Without Obfuscation

Politicians should remember what audience they're speaking to, says Medhurst, the Baylor professor, and "de-emphasize the jargon and use more common language that has the same meaning but is more clear and accessible to more people."

But lawmakers don't always want to be clear. In the heyday of "earmarking," or directing spending to favored projects, few members of Congress were bold enough to spell out in a bill that they wanted $1 million spent on a new building at their alma mater.

The tax code, meanwhile, is filled with language chosen carefully for its difficulty to mask the fact that a senator has slipped in a provision that will mean millions of dollars in breaks for a favored industry.

"It's a great way to obfuscate the discussion," Collender says.

Broader talk of tax policy has generated its own terminology. If tax cuts sound good, some politicians believe "tax relief" will sound even better. And if tax increases are unpopular, "revenue enhancements" may help take out some of the sting.

Sometimes jargon does take on a life of its own. Formerly technical terms can enter the common parlance. Ben Bernanke, chairman of the Federal Reserve, did not mean to coin a phrase that would dominate post-election budget debate last year, but that's what happened when he popularized the term "fiscal cliff."

It has happened before. "Entitlement" was first given its social-welfare connotations by an article in the Yale Law Journal, while the oxymoronic "tax expenditure" was the brainchild of Stanley S. Surrey, an assistant Treasury secretary in the 1960s.

After largely lying dormant for decades, "tax expenditures" (also known as loopholes, tax credits and breaks) gained some currency a couple of years ago, bandied about a fair amount as official Washington talked about a "Simpson-Bowles"-style "grand bargain."

But it never really caught on.

That's true of most Washington jargon, of course.

People keep trying to come up with catchy slogans they hope might catch fire — something like the "New Deal," says Ritchie, the Senate historian. "They're looking for the right hook," he says.

Others look for ways of tarring their opponents and their ideas together. "Obamaquester" is something conservatives like to type on Twitter these days, while last year the president mocked his opponent for suffering from "Romneysia."

Sometimes, politicians will embrace such implicit criticism and turn it to their advantage, as happened years ago with "Reaganomics," and as Obama has sought to do with "Obamacare."

The search for headline-ready and hashtag-friendly terms means Washington is likely to generate even more jargon, Collender says.

"Words have long served as an emotional shorthand, used not just by politicians and marketers," says Lindsay, the branding expert. "The best politicians redefine words to their advantage."