Accessibility links
States Take Sides As Court Revisits Voting Rights Act : It's All Politics The last time the Supreme Court heard a challenge to the Voting Rights Act of 1965, only one state asked that its key provision be struck down. But just four years later, seven states say the most effective civil rights statute in the nation's history has outlived its usefulness. 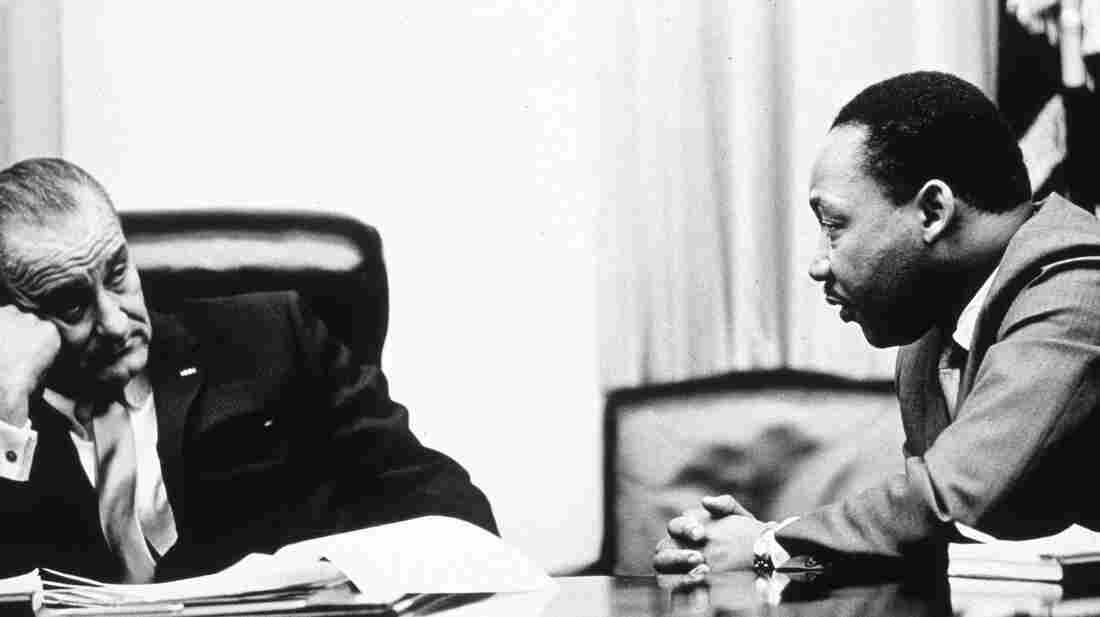 President Lyndon Johnson and civil rights leader Martin Luther King Jr. discuss the Voting Rights Act in 1965. On Wednesday, the Supreme Court hears arguments on whether a key part of the law is still needed nearly a half century after its passage. Hulton Archive/Getty Images hide caption 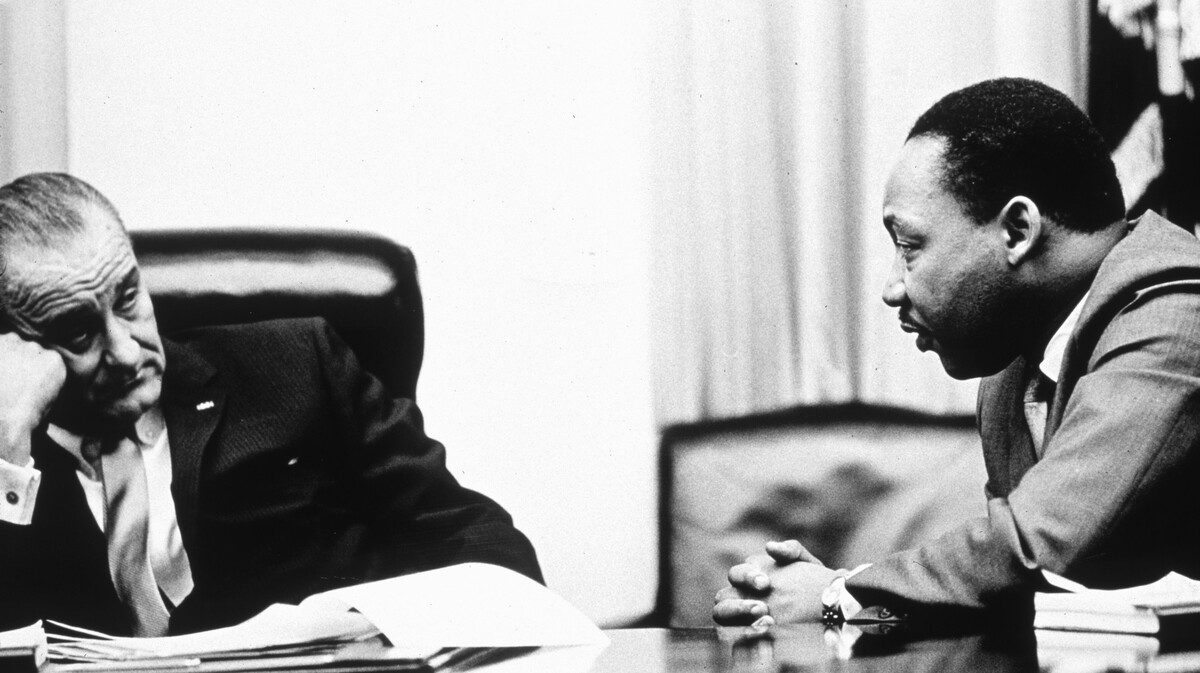 President Lyndon Johnson and civil rights leader Martin Luther King Jr. discuss the Voting Rights Act in 1965. On Wednesday, the Supreme Court hears arguments on whether a key part of the law is still needed nearly a half century after its passage.

The U.S. Supreme Court hears arguments next week in a case that tests the constitutionality of the 1965 Voting Rights Act, the law considered the most effective civil rights statute in American history. At issue is whether a key provision of the statute has outlived its usefulness.

A staggering 49 friend of the court briefs have been filed, among them briefs from 11 states urging the court to either strike down or uphold the law. What is intriguing is that some of the states now arguing against the law were not troubled by its provisions just four years ago, the last time it was before the court.

In 2009, a small Texas utility district challenged the so-called preclearance section of the law, which requires nine states, most of them in the South, and parts of other states like California and New York, to get advance approval from the Justice Department or a federal court in Washington before changing any voting laws or regulations.

When the case got to the U.S. Supreme Court, only one state — Georgia — came out clearly against the law, claiming that the provision was unconstitutional. Alabama filed a brief echoing part but not all of Georgia's arguments. Both emphasized that their respective states have changed dramatically since 1965, and asked the court to seriously consider the legality of the preclearance section, given its burden on covered states.

The Supreme Court in 2009 dodged the preclearance question, but the issue is back this year in a challenge brought by Shelby County, Ala. And this time seven states — Alabama, Alaska, Arizona, Georgia, South Carolina, South Dakota and Texas — are asking the court to strike down the law.

Of the seven, Arizona has made the most noticeable switch between 2009 and 2013. In 2009, Arizona joined a brief supporting the law, along with North Carolina, California, Louisiana, Mississippi and New York.

Back then, Arizona and the other states said that the preclearance section of the law was "not onerous," and that indeed, preclearance had offered "some benefits," for example, protecting them from expensive litigation. The states supporting the law said that although some of them had expressed initial resistance to the preclearance process when the Voting Rights Act was originally adopted, "by 2006 the process for seeking preclearance had become painless and routine."

Today, however, Arizona is on the other side of the debate, saying something very different. The preclearance requirement, it now argues, is "arbitrary and burdensome," and unconstitutional.

Arizona's governor this time, as last, is Republican Jan Brewer. Though she was quite new to the job in 2009, she had previously held the job of Arizona secretary of state, the position that deals with elections.

Among the states that are fully covered by the preclearance requirement, Mississippi seems to be the only one that has consistently supported the law. The state signed on to briefs in 2009 and again this year urging the Supreme Court to uphold the law.

New York, California and North Carolina — states that are only partially covered by the preclearance mandate — also have remained true to the positions they took four years ago. Like Mississippi, they are supporting the constitutionality of the law, declaring that it is not unduly burdensome.