Accessibility links
Loaded Words: How Language Shapes The Gun Debate : It's All Politics The debate currently raging over guns goes beyond a disagreement over policy. Advocates on both sides literally disagree on the terms of the discussion — as in, the words they use to describe it. They know that the specific phrases they use tap into deeply held values in the people who hear them. 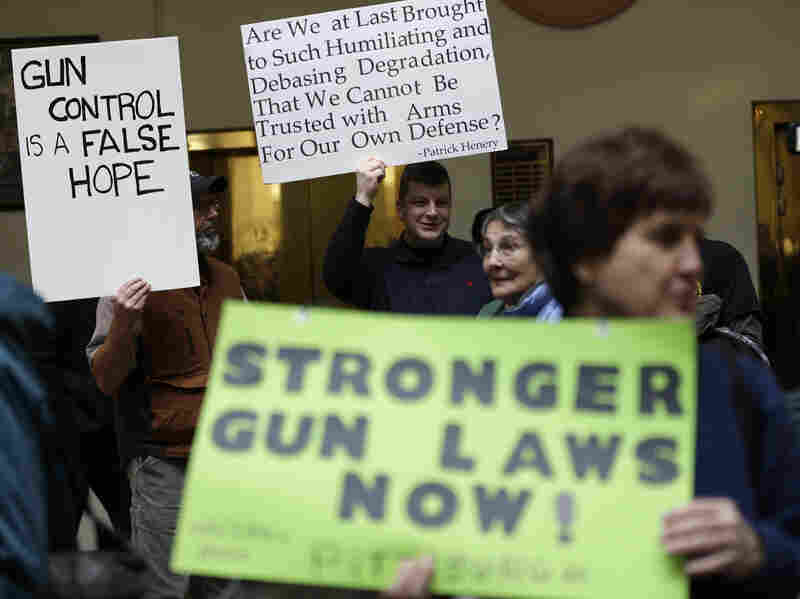 Advocates for and against stronger gun laws demonstrate in the Pennsylvania Capitol on Jan. 23 in Harrisburg, Pa. Matt Rourke/AP hide caption 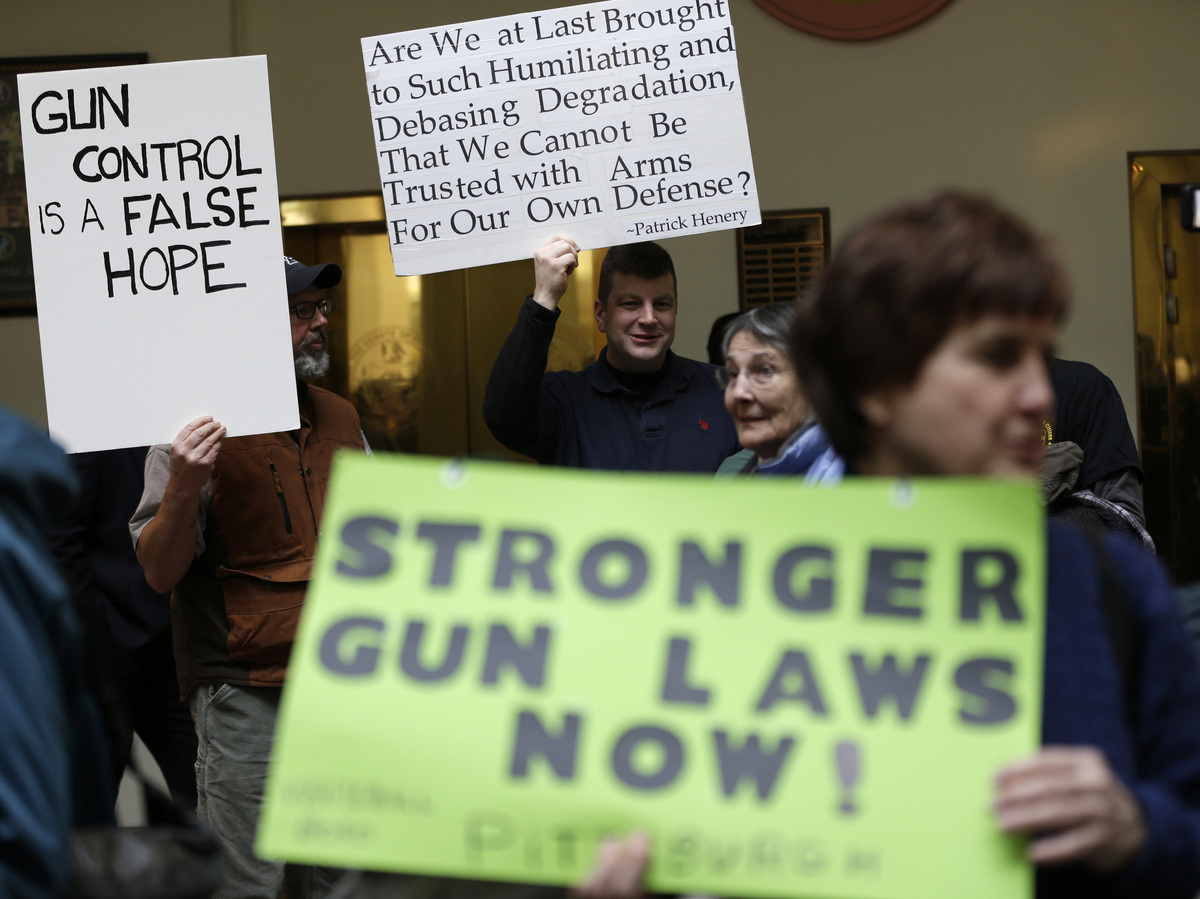 Advocates for and against stronger gun laws demonstrate in the Pennsylvania Capitol on Jan. 23 in Harrisburg, Pa.

The country has been debating gun regulations for months. Later this week, a Senate committee will start work on various proposals, including a background check on every gun sale and a ban on assault weapons.

But this debate over guns goes beyond disagreements about policy. Advocates on both sides quite literally disagree on the terms of the discussion — as in, the words they use to describe it.

Ask "gun control advocates" to describe what this debate is about, and they'll say "control" really isn't the word they prefer.

"We find that it's one of those terms that has some baggage," says Mark Glaze, director of Mayors Against Illegal Guns. "We talk about gun violence prevention, because that's what it is."

"Gun control" suggests big government telling Americans what to do. "Violence prevention" — well, that's something everybody could support in theory.

Change words, and you can change opinions.

On the other side of the debate, the National Rifle Association does its own polling, though it's not as open about what the conclusions are.

"We do polling all the time, and, you know, it runs the gamut of how people feel about certain issues, and certainly that includes some language," says Andrew Arulanandam, an NRA spokesman. But "I'm not going to divulge our polling numbers out there."

You can make an educated guess about what the polls show by listening to the NRA's language. It never uses its opponents' phrase, "violence prevention."

"For us, it's a debate over gun rights," Arulanandam says.

The NRA talks about defending the Second Amendment and protecting the Constitution. Those are deeply held American ideals.

Words do more than just describe the world. They literally define it. They shape and frame it.

"Most people don't understand this," says linguist George Lakoff of the University of California, Berkeley. "Most people think that words just refer to things in the world and that they're neutral. And that's just not true."

Lakoff has written many books about this idea. "English does not just fit the world. English fits the way you understand the world via your frames," he says. "And in politics they are morally based frames."

This is not just spin. Words in political debates tap into deeply held principles — like freedom and safety — and the specific phrases people use determine which values come up, in the same way that playing different notes on a piano will make music that evokes different emotions.

These principles apply to every debate, not just guns.

Decades ago, pollster Frank Luntz helped Republicans figure out the power of words. He showed them that voters are more likely to oppose the estate tax if it's called a "death tax." He found that Americans like oil drilling more if it's called "energy exploration."

But words are not fixed points on a map. They exist on shifting ground. A phrase that once carried a punch may grow toxic or just fall limp.

"An example of this can be seen in the recent announcement that Planned Parenthood would no longer be using the term 'pro-choice,' " says Ben Zimmer, executive producer of the Visual Thesaurus.

And he has lots of examples from government. Democrats used to proudly call themselves "liberal." They abandoned that word for "progressive." And now "liberal" is making a comeback.

Then, there's "reform." Zimmer says politicians of both parties tack that word onto any effort to change a program — from tax reform to immigration reform.

" 'Reform' is one of those terms that is very charged and helps to present one's own position as something positive — a way of advocating change in a positive light," Zimmer says. "But what counts as reform, of course, is in the eye of the beholder."

Politicians might call any proposal for change a "reform." But not every change is a good change.