Accessibility links
Obama's Sequester Gamble: What If Nobody Notices? : It's All Politics A slow-motion train wreck of $1.2 trillion in spending cuts spread out over 10 years would definitely be at odds with the growing urgency of the president's warnings as the March 1 deadline draws near.

Obama's Sequester Gamble: What If Nobody Notices?

Obama's Sequester Gamble: What If Nobody Notices? 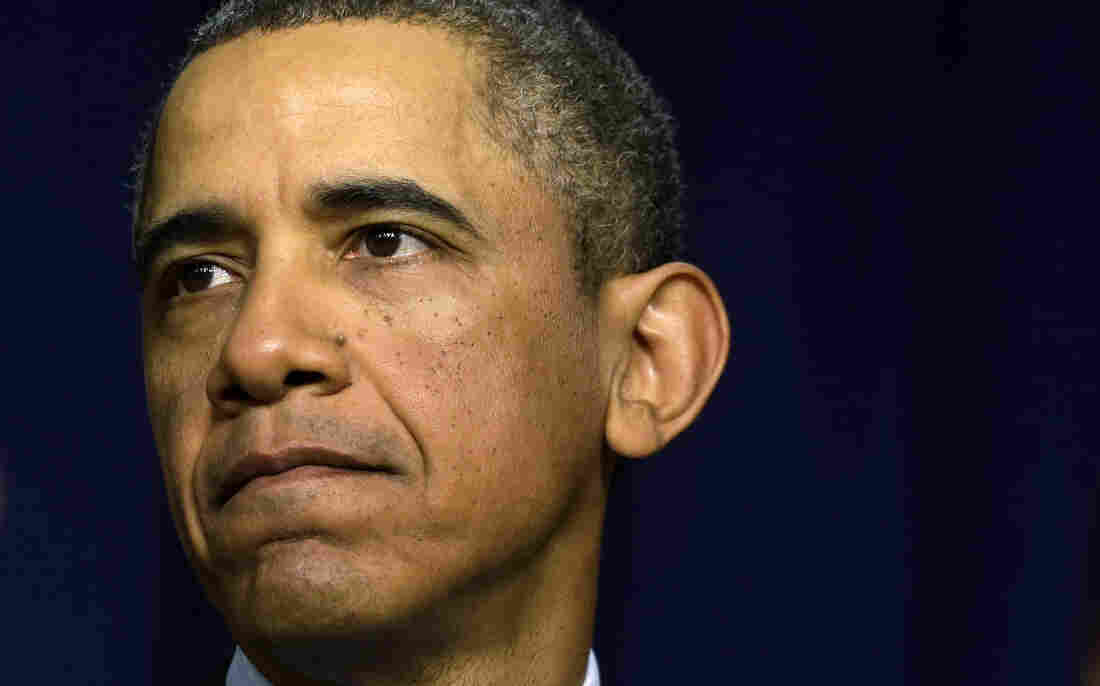 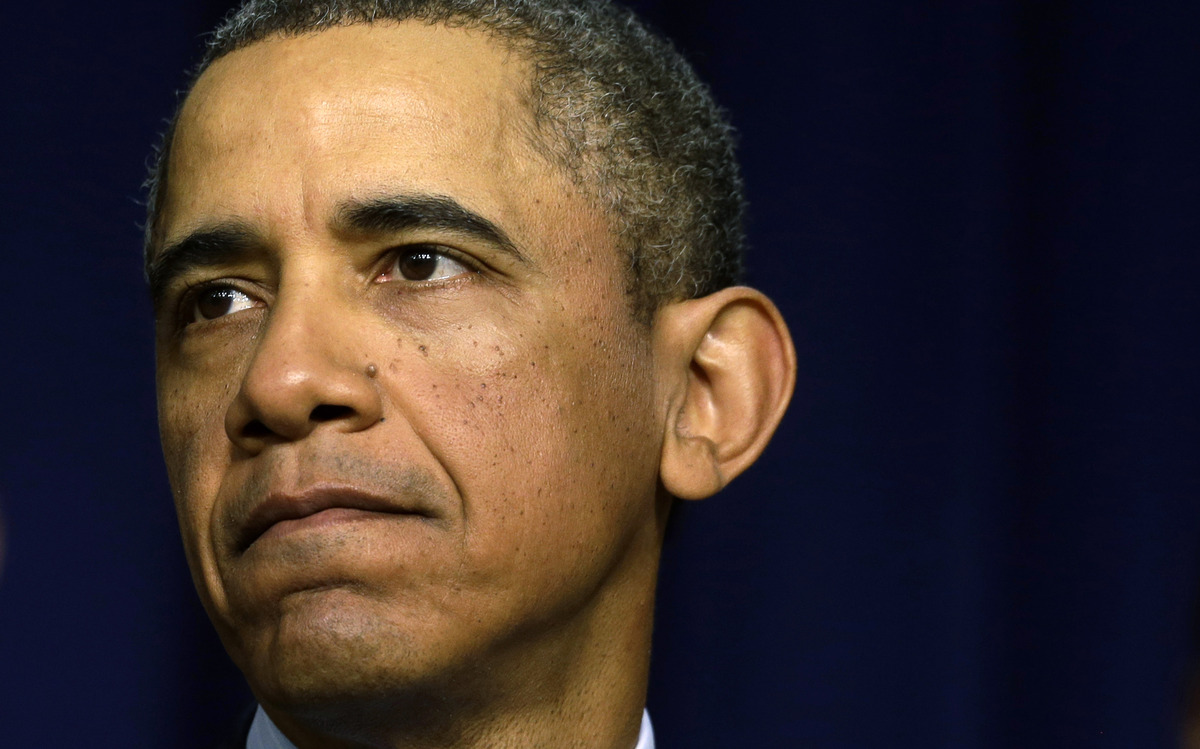 President Obama speaks about the sequester on Feb. 19.

President Obama has for weeks warned congressional Republicans and the American public of the dangers facing the nation from the sequester budget cuts.

Failing to reach a deal between the White House and Congress by Friday could lead to some young children being dropped from Head Start, the FBI furloughing agents and fewer food inspectors, according to the president.

If the cuts unleash these and other harms, like longer lines at airports, Congress and voters won't be able to say they weren't warned.

But what if the sequester, which would cut $85 billion from federal spending between March 1 and the end of September, turns out to be less of a calamity than Obama has warned? How might that affect his credibility and his political capital?

First, the mere fact of a sequester could be used to put Obama on the defensive. Why? Because there's video of him saying, flatly, that it wouldn't come to this.

During a presidential debate in October, Obama responded to a jab from Republican Mitt Romney that the sequester would take a large bite out of military preparedness:

Leave aside the credibility problem that arises from Washington Post journalist Bob Woodward reporting persuasively that the sequester was, indeed, the White House's idea. The president still has the additional problem that he declared before millions of TV viewers that sequester spending cuts "will not happen."

If the sequester does happen, expect video of Obama's declaration to be put into heavy rotation by his Republican critics and the news media. Such declarations gone wrong are never good for a president's credibility, as President George H.W. Bush learned after his "Read my lips: No new taxes" pledge was overtaken by his agreeing to new taxes.

But the "it will not happen" statement is just one possible risk to the president's credibility. Another is if the sequester cuts turn out to elicit a big yawn from the public. And that's a possibility because the automatic, across-the-board cuts won't happen all at once.

So the first few weeks of March could come and go without the sort of dramatic disruptions in government-provided services that would force Americans beyond the Beltway to take notice.

A slow-motion train wreck of $1.2 trillion in spending cuts spread out over 10 years would definitely be at odds with the growing urgency of the president's warnings as the March 1 deadline draws closer.

That dissonance could be exploited by numerous Republican skeptics who accuse the president of crying wolf.

In remarks on the Senate floor Tuesday, Mitch McConnell of Kentucky seemed to have Chicken Little in mind when the Senate minority leader said:

"The president's been running around acting like the world's going to end because Congress might actually follow through on an idea he proposed and signed into law — all the while pretending he's somehow powerless to stop it. ...

"Personally, I don't believe the world will end if the president's sequester takes effect. But our country would be much better served if the Democrats who run Washington would get off the campaign trail and work with us to trim the budget in a more rational way."

On Fox News Sunday, for instance, Sen. Tom Coburn of Oklahoma alleged that the president, through all of his alarms, was setting up a "straw man." Conservative columnist George Will pooh-poohed Obama as the "hysteric in chief."

A sequester-induced credibility hit combined with the reality that a second-term president's political capital starts to erode fairly early anyway could seriously damage Obama's ability to energize the nation and his supporters on the rest of his agenda, including tough issues like gun control and immigration.

President George W. Bush's second term never recovered from his failed push just after re-election to partially privatize Social Security. His lame-duck status could be dated to that. Obama could be facing something similar if the sequester turns out to be not nearly as bad as his warnings.

Of course, there's always the chance that the president's warnings of disruptions could prove to be accurate, or that the public will perceive them that way. Mike McCurry, White House press secretary to President Clinton during the federal government shutdowns in 1995 and 1996, thinks it's likely that Americans will notice and care about longer airport security lines. In an interview with NPR, he said:

"I think we're in for a month of follies here. And probably some increasing pressure as the month of March goes on where people begin to say, 'Now, wait a minute. I'm now reading in the paper that meat inspections are being curtailed at a time when we're worried about horse meat coming from somewhere. Or it's taking longer to get approval on things.'

"I have a friend going through a patent process right now. The trademark and patent office is going to have fewer people clocking fewer hours. So how's that going to impact the patent applications? So there'll be dozens of little ways in which the pain will start to get felt. And it just will create more political pressure than anything else."

That pressure, he believes, will fall largely on congressional Republicans.

"So he's got the better ability to control the public dialogue every day, and that should add up to driving his case a little harder."

McCurry sees a resemblance between what Obama is doing now and the playbook Clinton used during the mid-1990s government shutdown fights with House Speaker Newt Gingrich:

"We had a mantra every day saying, 'This fight is about preserving Medicare, preserving investments for our future and making sure we don't ruin our environment.' We just said that over and over again ... so it was a clear message delivered daily. I see the White House beginning to move into that pattern."