Accessibility links
Has The U.S. Outgrown The Voting Rights Act? : It's All Politics The Supreme Court is reviewing a key section of the Voting Rights Act of 1965, originally designed to wring institutionalized discrimination from voting in the Old South. It follows an election season when the act was used to forestall proposed changes in several states.

Has The U.S. Outgrown The Voting Rights Act?

Has The U.S. Outgrown The Voting Rights Act?

The nation has twice elected an African-American president.

Black voters have been turning out for general elections in rates that for the first time in U.S. history rival those of whites.

There can be little argument that those developments illustrate dramatic change in a country still scrubbing at the enduring stain of slavery.

But do they suggest that the Voting Rights Act of 1965, a civil rights breakthrough originally designed to wring institutionalized discrimination from the nation's voting process in the Old South, is obsolete? 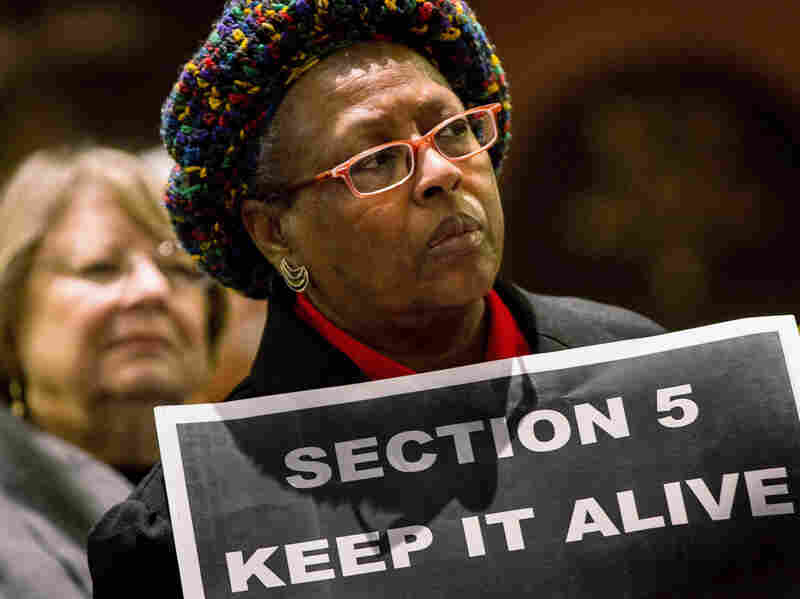 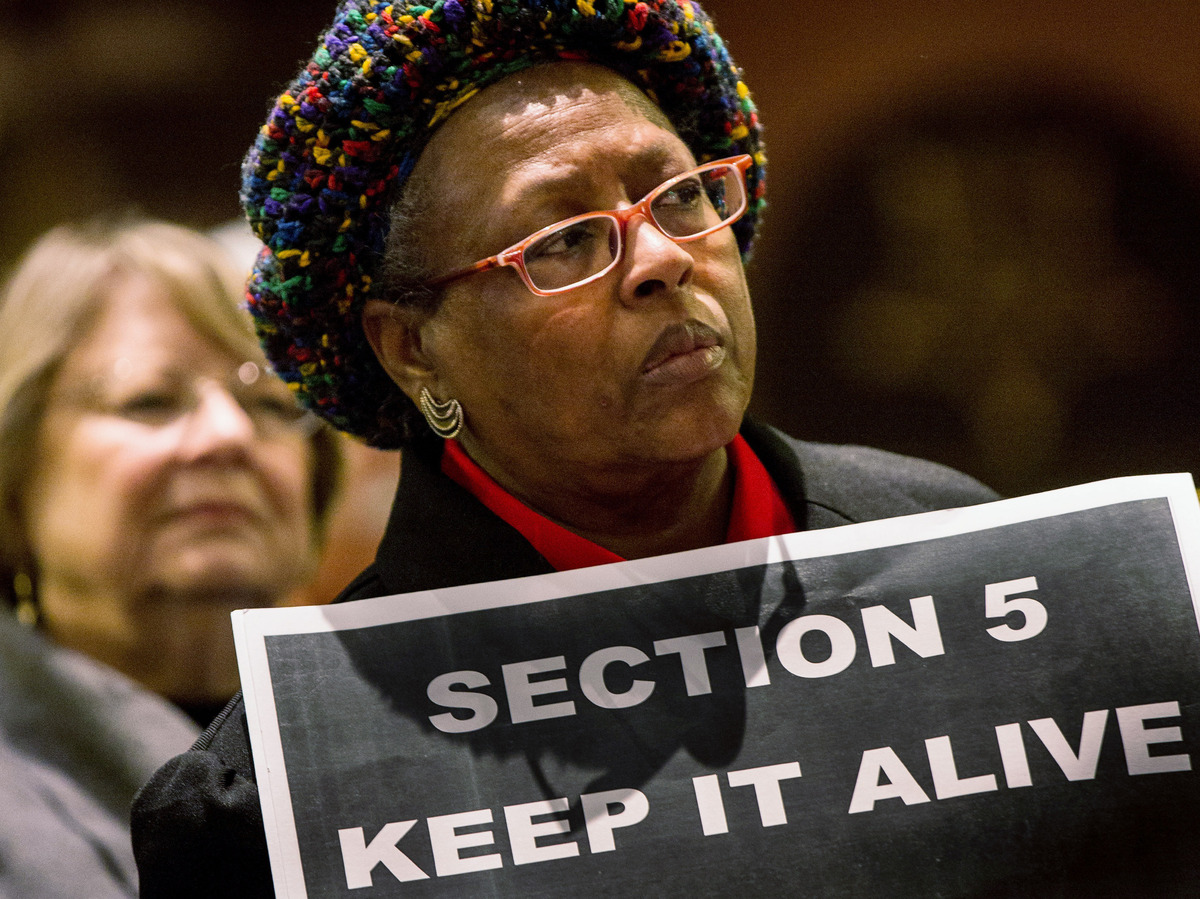 A supporter of the Voting Rights Act attends a rally Columbia, S.C., on Tuesday.

The Supreme Court on Wednesday will consider just that, as justices hear a challenge to the act's key Section 5, which requires federal preapproval of proposed election and voting changes — from voter ID to redistricting — in nine states and a smattering of smaller jurisdictions elsewhere with histories of voting-related discrimination.

The constitutional challenge, which originated in Alabama's Shelby County, comes seven years after Congress overwhelmingly reauthorized the act for another quarter century.

And it follows an election season when the act was used to forestall a number of efforts that would likely have made voting more difficult for poor and minority Americans — including those in the rapidly growing Hispanic community.

"Election laws need to apply to every state and jurisdiction equally, whether they're heavily Hispanic or heavily African-American," Edward Blum, a leading force behind the high court challenge, told us in a recent interview. "Those laws need to be one-size-fits-all."

Lining up on the other side are civil rights activists, fair voting experts and even Virginia lawyer Gerald Hebert, who has made his name helping jurisdictions get off -- or, in the common vernacular, "bail out" — of the federal government's election watch list.

A Way Out, If You Don't Discriminate

One of the most persistent arguments made by those who want to see Section 5 go away is that states are unfairly compelled to remain on the federal list because of outdated formulas contained in the original 1965 act, and not based on current evidence of discrimination.

They also argue that bailing out, which requires proof of a decade of nondiscrimination in elections and voting, is complicated and prohibitively expensive.

Hogwash, says Hebert, who notes that since 2009, when the Supreme Court made bailing out easier, nearly 130 jurisdictions (though no states) have successfully been released from the federal list.

An additional 69 jurisdictions successfully bailed out between 1982 — when Congress amended the Voting Rights Act to include new bailout standards for local governments — and 2009.

More than 100 Virginia jurisdictions, including 24 counties and seven independent cities, have successfully bailed out of federal pre-clearance.

The costs of the process, which is largely paperwork, Hebert says, rarely exceed $5,000.

"It's affordable and cost-effective, it's administratively feasible and readily achievable," says Hebert, a former longtime Justice Department voting rights official who has argued as much in an amicus brief filed with the Supreme Court. "Bailout is not illusory; it's actually workable."

Blum and other critics, however, also argue that every citizen or entity may pursue voting discrimination claims through other provisions contained in Section 2 of the Voting Rights Act.

Section 2, however, puts the onus of proof on the plaintiff. Hebert argues that the cost and time of mounting a discrimination lawsuit under that section of the act is an "uphill climb." Some statewide redistricting challenges, for example, can run well over $1 million, he says.

The Voting Rights Act in recent years has been used to block efforts that have included a photo ID law change in South Carolina, early voting curtailment in Florida, and, perhaps most significantly, Texas redistricting that federal officials found intentionally discriminatory.

If the high court decides to strike Section 5, redistricting experts like Michael McDonald suggest that the biggest effect will be felt in state and local voting districts.

"They are the most likely to be splintered," says McDonald, a principal investigator for the Public Mapping Project, which is dedicated to providing more transparency in drawing legislative district lines after each new census.

"The effect at the federal level for congressional districts would likely be rather small," he argues, because the threat of litigation would remain for such high-profile redistricting efforts.

At the state and local level, however, parties in power would have much more ability to gerrymander with impunity, dividing voting communities, redistricting experts argue, or packing them with minority voters to dilute their ability to build crossover coalitions in more diverse districts.

In testimony before Congress in 2006, before legislators reauthorized the Voting Rights Act, Chandler Davidson of Rice University noted that the act had been in effect for more than four decades.

"From one perspective, this is a rather long period of time," he said. "On the other hand, that period constituted the longest uninterrupted stretch of time in the history of our republic in which blacks nationwide have been able to vote with relative freedom."

"From this perspective," said Davidson, author of Quiet Revolution in the South: The Impact of the Voting Rights Act, "black voters have barely got their sea legs on the American ship of state."

It's now up to the high court justices to decide whether black Americans and other emerging minorities can maintain those sea legs in places like Texas and Arizona, South Carolina and Mississippi, Florida and Alabama without the enhanced scrutiny of federal officials.