Accessibility links
Obama Team Stops Saying 'Global War On Terror' But Doesn't Stop Waging It : It's All Politics When President Obama took office, he changed the rhetoric from the Bush years. But he never abandoned the idea of global war — a concept with profound legal implications. 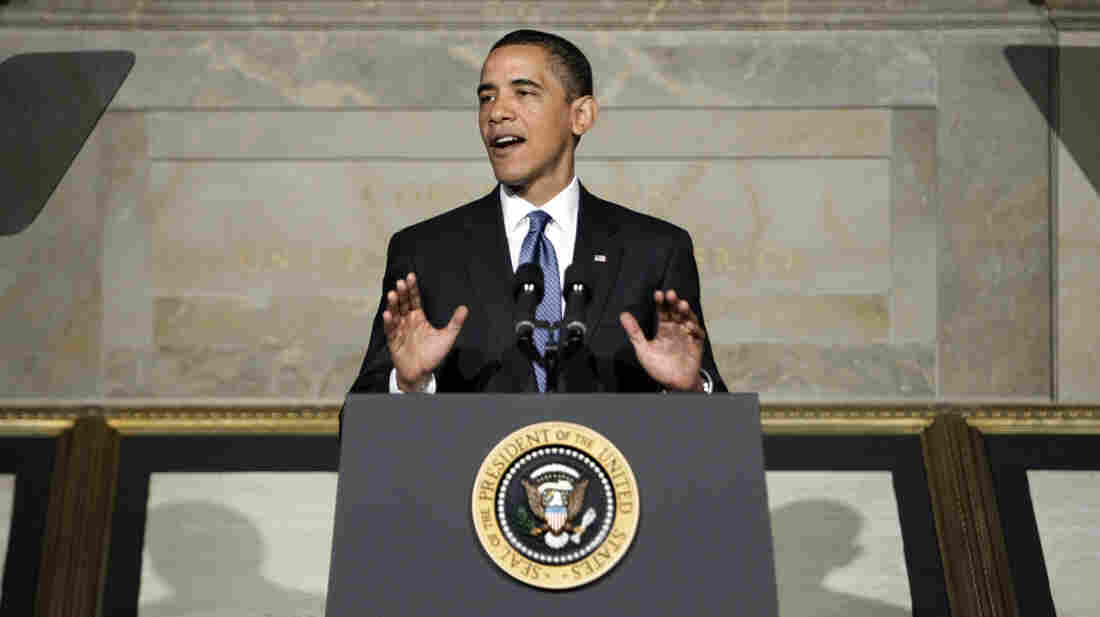 Standing in front of the Constitution, President Obama delivers an address on national security and terrorism in 2009 at the National Archives in Washington. J. Scott Applewhite/AP hide caption 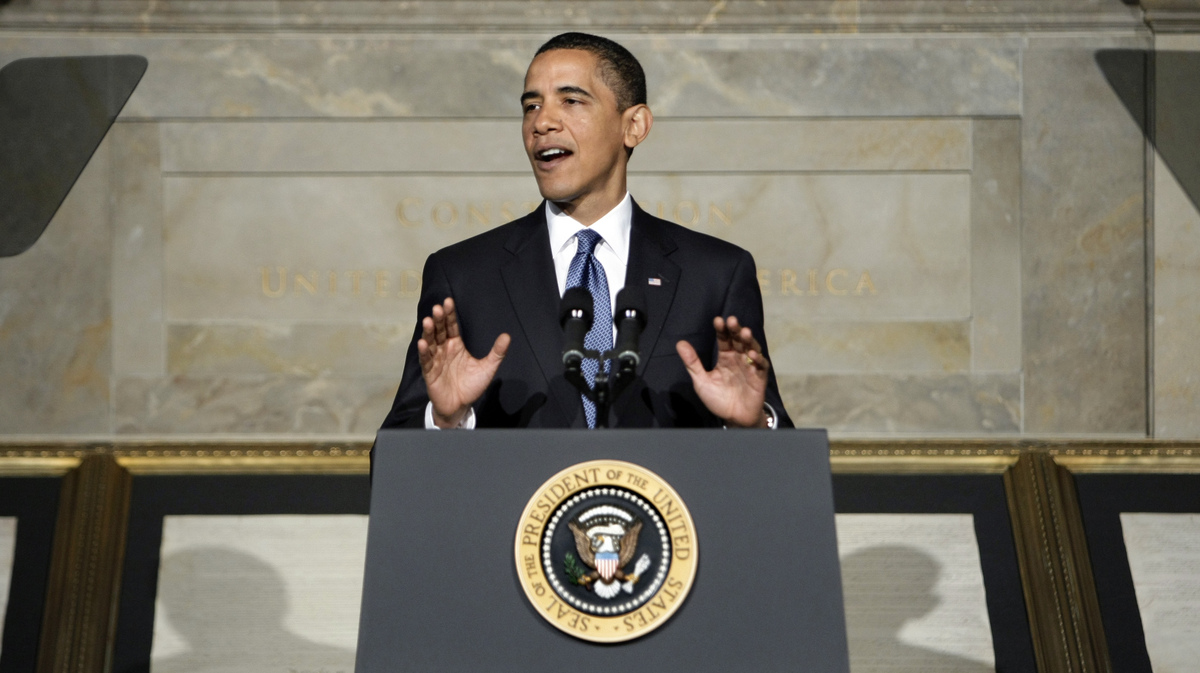 Standing in front of the Constitution, President Obama delivers an address on national security and terrorism in 2009 at the National Archives in Washington.

After the attacks of Sept. 11, 2001, President George W. Bush often made a provocative claim: He argued that the U.S. was fighting a war without a typical battlefield. In effect, he said, this war is everywhere.

"Our enemies make no distinction based on borders," he said in a 2007 speech in Michigan. "They view the world as a giant battlefield and will strike wherever they can."

He said the U.S. has to fight back accordingly — without borders.

That idea has profound legal implications. If the whole world is a battlefield, then the laws that apply uniquely to war apply everywhere for the foreseeable future.

When President Obama took office, he changed the rhetoric. "Global war on terror" had bad connotations from the Bush years, and al-Qaida was using it as a recruiting tool. But Obama never abandoned the idea of global war.

"We are indeed at war with al-Qaida and its affiliates," he said at the National Archives a few months after taking office.

"Its affiliates" include a range of terrorist groups, in countries around the world — some with only loose ties to al-Qaida. So it remains a global war in practice, if not in name — something the administration has struggled to explain.

"What I'm hearing you say," she said, "is that the Obama administration continues to see that there is such a conception as a global war on terror, and I would just urge you to reconsider."

"You believe that it's possible to target to kill," she said.

"You know, I said a lot of things in my remarks. That's not one of the things I said," Koh answered.

Now the administration has revealed more of its legal thinking behind these policies, and the debate is getting even hotter.

Karen Greenberg, who directs the Center on National Security at Fordham Law School, says it walks like a duck, and it quacks like a duck.

"Look, when you are using Predator drone strikes to attack enemies in countries from Africa to South Asia, you are engaged in a global war on terror," she says.

The administration likes to emphasize that drone strikes are just one tool, used sparingly.

"Most of counterterrorism work is not killing people," says Tommy Vietor, who just stepped down as spokesman for the White House's National Security Council. "It's governance and development and capacity-building with our partners. The president views this as being really a long game."

Yet Vietor acknowledges that Obama's use of drones is constrained less by legal handcuffs than by the judgments of those in his administration.

"Those are judgment calls," he says. "I mean, a specific action is taken based on the specific circumstances involved."

Obama has used drones far more than Bush did. That's partly because the technology keeps getting better and cheaper.

Drones are also a useful substitute for putting American troops in harm's way, says Matthew Waxman, a Columbia Law professor who served in the Bush administration.

"The Obama administration has learned once you get into office and are dealing with national security crises around the world, you want to assert the kinds of powers you see as necessary to deal with them," Waxman says.

The legal authority for drone strikes comes from a law that Congress passed just after the Sept. 11 attacks, called the Authorization for Use of Military Force.

On Sunday, a New York Times editorial said that law has created a "perpetual, ever-expanding war" and called on Congress to repeal the law. Neither Congress nor the president has shown any desire to do so.