Accessibility links
Reluctant Justices May Be Forced To Make History : It's All Politics A look back at landmark cases makes clear that the Supreme Court never really knows exactly how its decisions will play out — especially not in the long run. That uncertainty must loom over the justices now as they contemplate the issue of gay marriage.

Reluctant Justices May Be Forced To Make History

Reluctant Justices May Be Forced To Make History 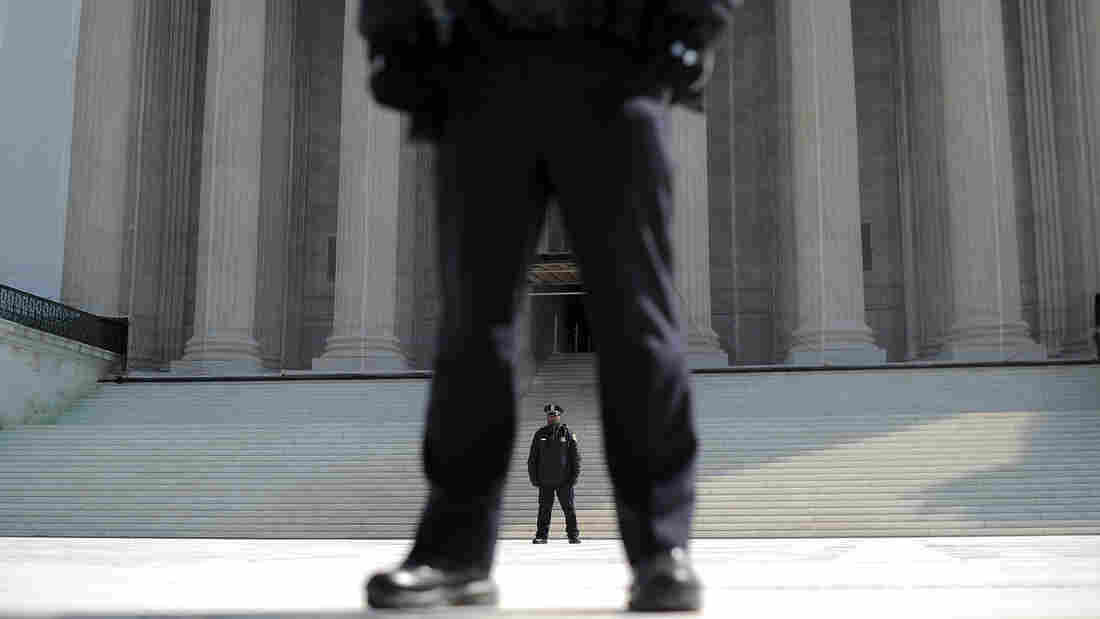 Police stand guard in front of the U.S. Supreme Court on Wednesday as the justices hear arguments on the constitutionality of the federal Defense of Marriage Act. Jewel Samad/AFP/Getty Images hide caption 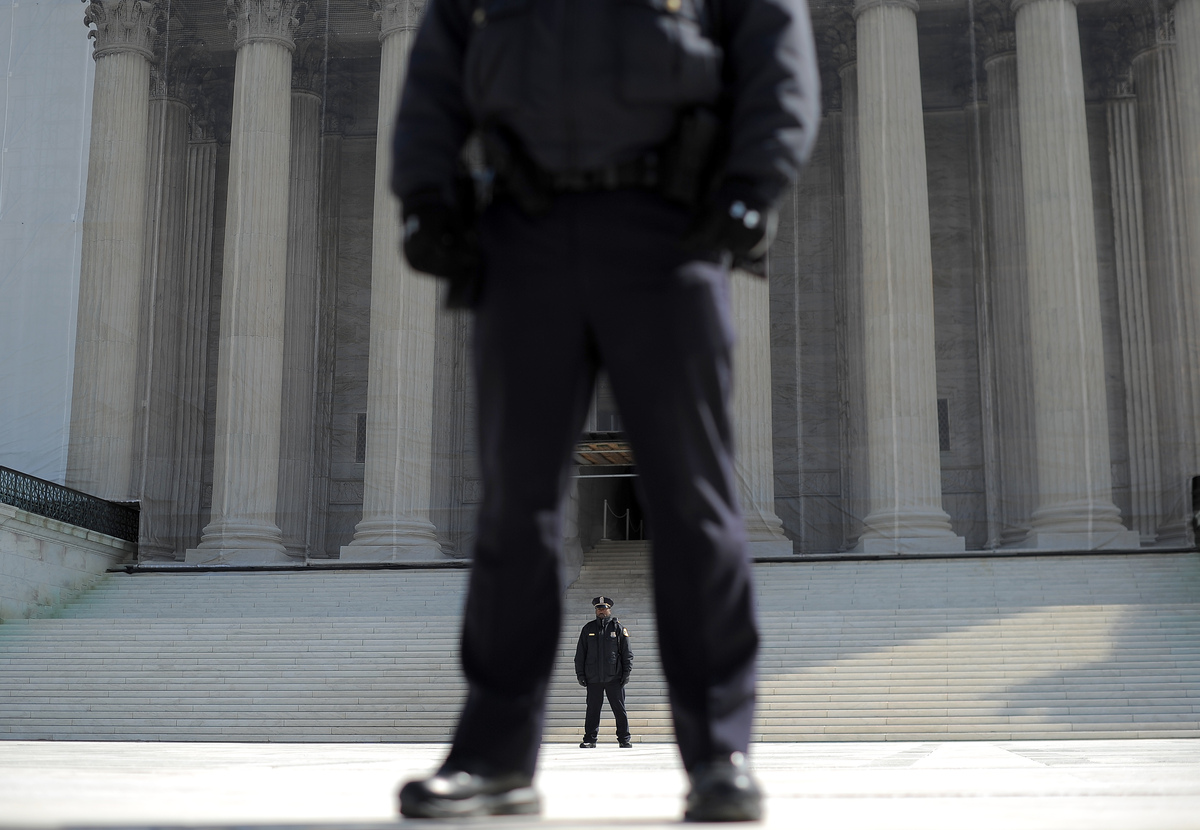 Police stand guard in front of the U.S. Supreme Court on Wednesday as the justices hear arguments on the constitutionality of the federal Defense of Marriage Act.

Now and then, an issue before the U.S. Supreme Court changes the course of the nation's political history — whether the justices like it or not.

It's happening again with gay marriage. This week the court heard oral arguments in two key cases. One could restore legal same-sex marriage in California; the other could end discrimination against gay married couples in the administration of more than 1,000 federal programs.

The questions from the pivotal justices indicated they might prefer these cases — and these issues — be decided by someone else. Nearly half of each day's session was devoted to questions of standing and jurisdiction, with much of the court clearly skeptical about the task at hand.

Given that politicians were "falling over themselves" to support gay marriage, in his phrase, Chief Justice John Roberts seemed loath for the court to get involved.

For the justices, it has always been axiomatic that their deliberations are legal and rational and divorced from the winds of political sentiment and the vagaries of political consequences. But for the rest of the world watching the court, this has seemed a conceit often difficult to credit.

The court surely knew it was shaking the foundations of society when it ruled against school segregation in 1954 (Brown v. Board of Education), and when it announced its landmark "one person, one vote" principle in a series of cases starting with Baker v. Carr in 1962. And there was little chance it missed the significance of Bush v. Gore, the case that decided the presidential election of 2000.

But it is hard to imagine that the court foresaw, in deciding Roe v. Wade in 1973, that 40 years later we would still be embroiled in a political war over it. Just this week North Dakota enacted a clutch of new laws seeking to force Roe's reconsideration. And in the intervening decades the abortion issue has divided friends and even families, while influencing or determining the outcome of countless elections from local boards to the White House.

Similarly, the majority in Buckley v. Valeo in 1976, which decided that campaign money enjoyed First Amendment protection as speech, might well be flabbergasted to see how money has changed our politics since. Yet when the court opened the campaign finance floodgates wider still in 2010 in Citizens United, the author of the opinion, Justice Anthony Kennedy, flat out denied that it would create even an appearance of corruption.

Similarly, for generations, the court refused to take up congressional redistricting plans, no matter how egregious their partisan gerrymandering. Of course, that refusal was itself a huge weight on the political balancing scales, enabling outrageous schemes. But later, when the court did start throwing out such plans on the basis of racial discrimination, the effects were immediate and lasting. Parts of the South began electing black representatives to Congress and legislatures for the first time.

Later, in the early 1990s, when the court pressed the states to create as many of these "majority minority" districts as possible, the unintended byproduct was a concentration of white voters in surrounding districts. That led immediately to an explosion of Republican wins in those districts in 1994 and the GOP had its first majority of House seats from Dixie since Reconstruction. They have had that majority ever since.

What is believable, and in fact undeniable, is that the court never really knows exactly how its decisions will play out — especially not in the long run. That uncertainty must loom over the justices now as they contemplate the issue of gay marriage.

The attitudinal turnaround in society, as Roberts noted, has happened so fast that the political community cannot scramble fast enough to keep up. As recently as 2008, every major Democratic candidate for president opposed same-sex marriage. This past week, Hillary Clinton joined President Obama and Vice President Biden in crossing over to the new party orthodoxy. So did half a dozen Democratic senators. As of this writing, only nine of the 55 senators in the Democratic caucus are still opposed to gay marriage.

How much of a reversal is this? In 1996, the Defense of Marriage Act had the overwhelming bipartisan support of 85 senators and 84 percent of the House, and it was signed into law by Hillary Clinton's husband, who was president at the time. He, too, has recently recanted.

The Democrats are, of course, reacting to polls that show as many as 58 percent of Americans now support gay marriage. Republicans' base has yet to shift on the issue, but their leaders know that among voters under 30 support for gay marriage now crosses party lines.

The dilemma the GOP faces is the clear contradiction between the way things have been and the way things are going. Whatever it decides now will have political consequences for many years to come.

In the end, the court confronts the same dilemma. Whatever decision it makes in its gay marriage cases — including any effort not to decide — will have huge and lasting political ramifications.

Whether the court wants them or not.