Accessibility links
Some Gun Control Opponents Cite Fear Of Government Tyranny : It's All Politics Gun-rights advocates are increasingly arguing that they need weapons to protect themselves from the government. They say that's what the Second Amendment is really about. Now some elected officials seem to be playing off those fears. 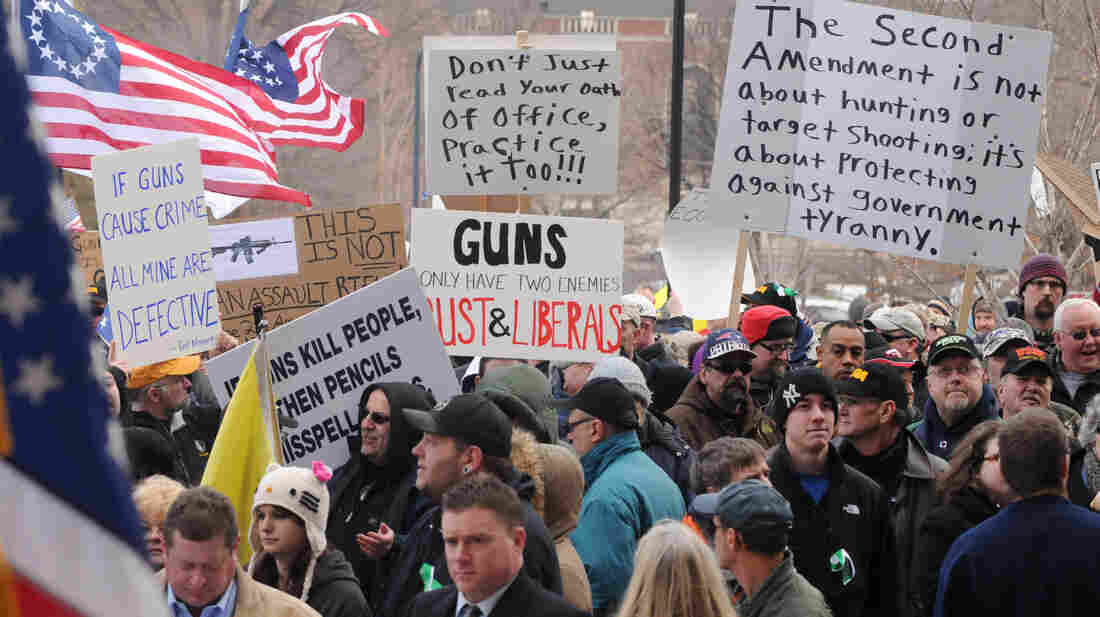 Hundreds of gun owners and enthusiasts attend a rally at the Connecticut Capitol in Hartford on Jan. 19. Rick Hartford/MCT/Landov hide caption 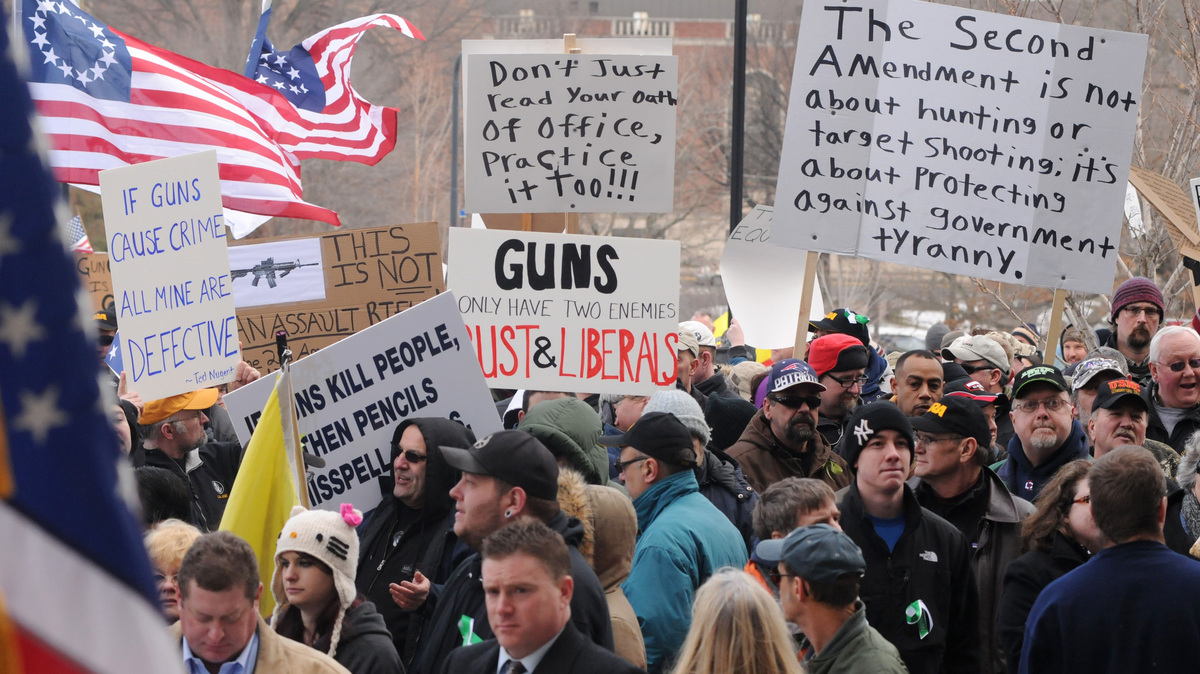 Hundreds of gun owners and enthusiasts attend a rally at the Connecticut Capitol in Hartford on Jan. 19.

As the Senate returns from a two-week spring recess Monday, topping its agenda is legislation to try to curb the kind of gun violence that took the lives of 20 first-graders in Connecticut last December.

Recent polls show broad popular support for enhanced background checks and bans on military-style guns and ammunition. But many members of Congress side with gun-rights advocates who oppose such measures.

And those advocates are increasingly making the case that Americans need guns to fight government tyranny.

It was late January, six weeks after the shooting in Newtown, Conn. The Senate Judiciary Committee was holding its first hearing in the aftermath on what to do about gun violence.

Seated at the witness table was Wayne LaPierre, CEO of the National Rifle Association. Sen. Dick Durbin, D-Ill., had a question for the NRA chief: Did he agree with the point of view that people needed firepower to protect themselves from the government?

"Senator, I think without any doubt, if you look at why our Founding Fathers put it there, they had lived under the tyranny of King George and they wanted to make sure that these free people in this new country would never be subjugated again and have to live under tyranny," LaPierre said.

The same argument is being made by a smaller, more strident gun lobbyist, the Gun Owners of America.

"I think principally the Second Amendment deals with keeping the government from going astray in a tyrannical direction," says Larry Pratt, the group's executive director.

That notion — that there's a constitutional right to take up arms against the government — has gained wide currency among gun advocates, says Adam Winkler, a constitutional law professor at the University of California, Los Angeles, and the author of Gunfight: The Battle over the Right to Bear Arms in America.

They put the Second Amendment in the Constitution ... in order for us individuals to protect ourselves against a power-hungry government."

"The idea that the Second Amendment protects the right to have guns to fight against the government used to be a fringe idea, just among militia groups and Second Amendment purists," he says. "But it's become much more mainstream over the last 10 years or so."

'I Fear The Government'

To get a sense of how much more mainstream, I spoke with some gun owners at a diner in Hellertown, Pa. All said the government is not to be trusted.

"I fear the government, and I think when they start getting background checks, they're going to — just like in Germany years ago, they used that to confiscate weapons later on," David Kulp said.

"Everyone who has a gun, they want to take them and put them into a system that everyone can look at and say this person has a gun," said gun owner Michael Shallot.

Vasilios Christogiannis put it this way: "They put the Second Amendment in the Constitution ... in order for us individuals to protect ourselves against a power-hungry government."

Elected officials seem to be playing off those fears. Ted Cruz, the newly elected Republican senator from Texas, had the crowd on its feet at the recent Conservative Political Action Conference.

The Tea Party-backed Texan is one of five Senate Republicans vowing to filibuster Democratic-sponsored gun legislation. Senate GOP leader Mitch McConnell, who's seeking re-election in Kentucky, had this message sent to hundreds of thousands of phones there in February: "President Obama and his team are doing everything in their power to restrict your constitutional right to keep and bear arms."

A response of sorts came last week at a police academy in Denver. President Obama declared there that opponents of tougher gun measures have "ginned up fears among responsible gun owners."

"You hear some of these quotes — 'I need a gun to protect myself from the government.' 'We can't do background checks because the government's going to come take my guns away,' " Obama said. "The government's us. These officials are elected by you."

And at least some of those officials in Congress will be trying this week to pass proposals on curbing gun violence, which the president has said he'll sign into law if they reach his desk.