Accessibility links
Notes On A Sex Scandal: Rebounding From Disgrace : It's All Politics Politicians who were caught up in sex scandals have often achieved second careers in media and lobbying. Now, some want to return to elective office.

Notes On A Sex Scandal: Rebounding From Disgrace

Notes On A Sex Scandal: Rebounding From Disgrace 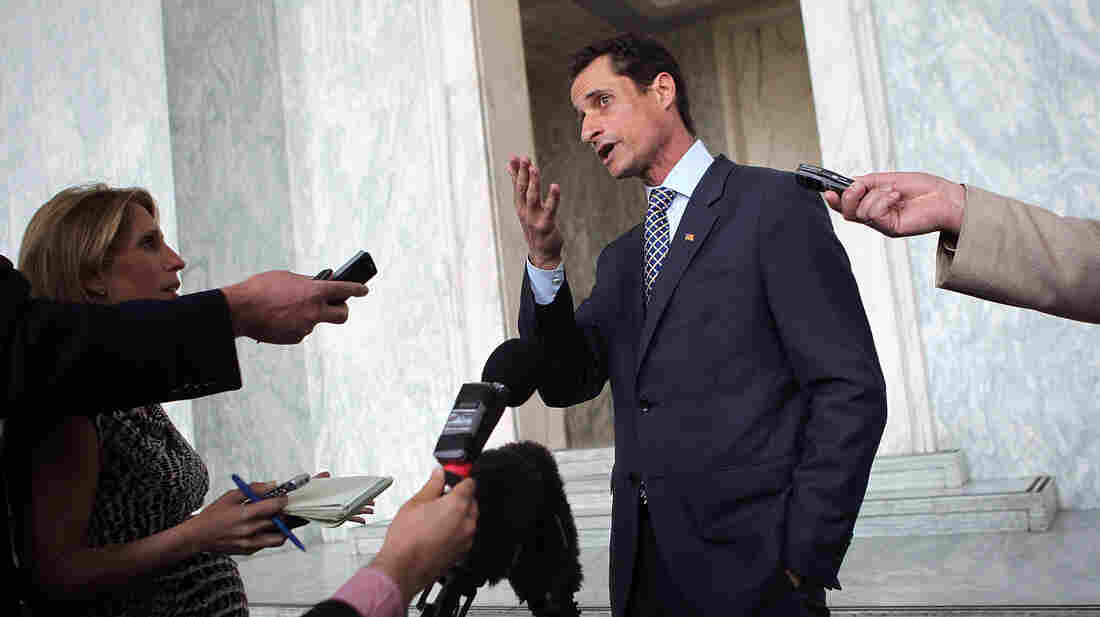 It's comeback season for public figures who have been disgraced by their own sex lives.

Former South Carolina Republican Gov. Mark Sanford, who received national attention after leaving the country to pursue an extramarital affair five years ago, is favored to win a May 7 special House election. He won Speaker John Boehner's endorsement this week.

In New York, Anthony Weiner, a Democrat who resigned from Congress after tweeting a salacious photo of himself, is talking about running for mayor.

And in the world of sports, golfer Tiger Woods, who had engaged in multiple extramarital affairs, has regained his top ranking and is seeking his fifth green jacket at the Masters. 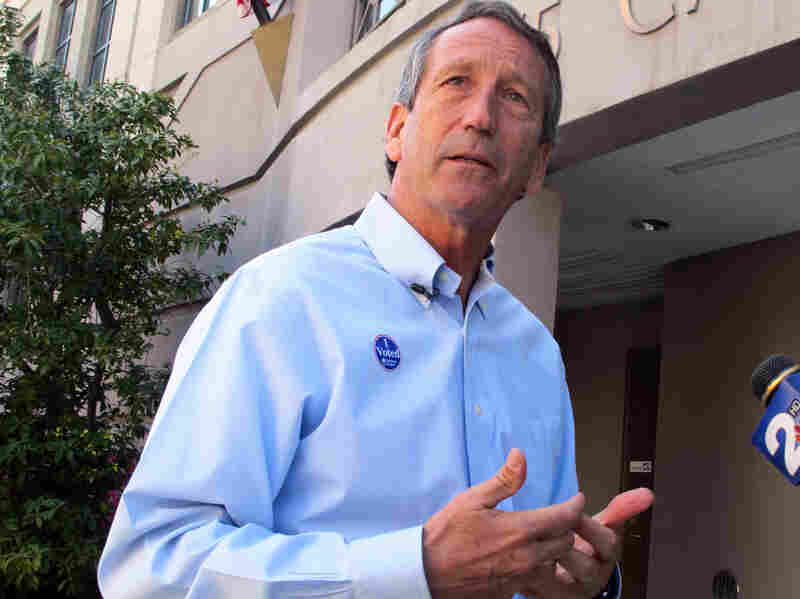 Mark Sanford will go before the court of public opinion on May 7, when voters decide whether he or Elizabeth Colbert Busch is deserving of a U.S. House seat. Bruce Smith/AP hide caption

"We've become over and over again more used to scandals in our public figures, and more accepting," Johnson says. "It's no longer a big deal."

There's nothing unusual these days about politicians who resigned their seats in the midst of scandals returning to the public eye — generally as pundits or lobbyists.

What makes Weiner and Sanford stand out is their attempt to return to elective office, normally a road strewn with land mines for those with any kind of negative image.

"You don't run for Congress or mayor of New York without doing polling," says John P. David, a public relations consultant in Miami. "They wouldn't be in the race — Weiner's camp, Sanford's camp — unless they thought they had a valid chance."

There are undoubtedly behaviors too upsetting or disgusting from which to recover politically (and corruption probably presents a more difficult climb toward redemption than sex). And neither Sanford nor Weiner has any guarantee of success.

But their comeback attempts illustrate that it may be possible to bounce back not just from sin but from becoming a national laughingstock.

By now, there's a well-worn set of steps you take in trying to wipe off the stink of disgrace. You apologize, you serve a period of penance and you attempt some kind of comeback by arguing that you still have something to contribute.

In many cases, it works.

"From the distance of 15 years, the public probably thinks very little about the fact that Bill Clinton was impeached by the House and tried by the Senate," says Tom Fiedler, dean of the college of communication at Boston University. "That's faded quite a bit."

The ability to recover from a scandal depends on several factors, suggests Bob Thompson, a pop culture professor at Syracuse University.

One: It's important that the scandal didn't touch directly on job performance or public image. Sex doesn't ultimately have much to do with Tiger Woods' golf game, while Lance Armstrong's steroid use had a big impact on his cycling career. For politicians, a corruption scandal is harder to recover from than something involving sex.

Two: You don't want to come across as a hypocrite. That's why family-values politicians such as former Idaho Sen. Larry Craig (Republican accused of men's room solicitation) have a difficult time surviving sex scandals. Some governors caught in affairs — including Mark Sanford — have managed to serve out their terms, but Eliot Spitzer, who had been known as a zealous prosecutor, resigned within a couple of days of news breaking about his dalliance with a call girl.

Three: Your ability to come back depends on how much you lied about your behavior in the first place. Categorical denials are almost the knee-jerk response to news about affairs, but you can recover by apologizing quickly for the denial. Stonewall or lie for too long, and it's tough to come back.

Former New York Gov. Eliot Spitzer (Democrat caught with a prostitute) has made a second career for himself as a columnist and cable personality. Former Florida Rep. Mark Foley (Republican who sent sexual emails and instant messages to teenage pages) hosted a radio talk show in North Palm Beach.

But there's a big difference between working in media or lobbying and seeking elected office, for which you by definition have to win approval from a majority of the public.

"There are limits to the extent of your comeback," Fiedler says. "I don't believe that somebody who has been involved in a sex scandal has been able to return to the position from which they fell."

In Weiner's case, he's seeking what would amount to a promotion, just two years after resigning his House seat. He'd been contemplating a run for New York City mayor before his career appeared to be derailed by his tweeting and sexting scandal.

His highly public re-emergence is like "an early Christmas present" for headline writers in New York, David says. Weiner also provides sure material for TV comedians.

"You've got to pass that laugh test," says Johnson, the consultant in Georgia. "Weiner probably has a more difficult task ahead of him than Mark Sanford, because of the New York media market."

Johnson suggests that one strategy Weiner could pursue is to "exhaust the media" by holding an open-ended news conference in which he would answer any questions that might be put to him for however many hours it takes, after which he could say, "I've answered those questions and it's time to move on."

Each case of scandal is different, and chances for recovery depend on the personality of each individual. Those who are otherwise popular, such as Clinton or former Massachusetts Rep. Barney Frank (Democrat whose former boyfriend ran a prostitution ring out of his apartment), can put the taint of scandal mostly behind them.

There are some politicians who will never receive public absolution. One likely recent example is former Sen. John Edwards, the North Carolina Democrat who fathered a child out of wedlock, misleading his wife, his staff and the voting public in the process. 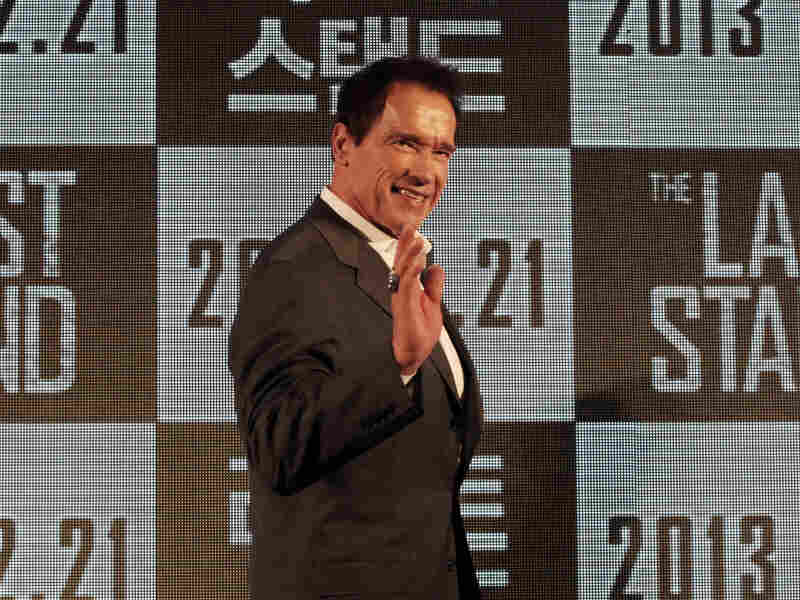 Arnold Schwarzenegger's political career had already tanked before he admitted to fathering a child out of wedlock. Now he's making movies such as The Last Stand. Ahn Young-joon/AP hide caption

Republican Arnold Schwarzenegger was able to survive allegations of sexual harassment when he first ran for governor of California because his star was on the rise, says Jack Pitney, a government professor at Claremont McKenna College, near Los Angeles.

By the time Schwarzenegger admitted he had fathered a child out of wedlock, he was already out of office and a political pariah within his own party. "He was already spoiled goods before this emerged, and that just confirmed for many Californians that he was a schmuck," Pitney says.

That hasn't stopped Schwarzenegger from making movies, but standards are different in Hollywood than they are on the campaign trail, where both the media and political opponents like to highlight every possible fault.

Still, at some point, the opponent of a disgraced former official has to decide how often to raise the issue of past sins. If you sling mud at someone who is already caked in the stuff, you run the risk of looking like you're wallowing in the muck yourself.

"If you didn't like Mark Sanford because of what happened, there was nothing a negative campaign could do," Johnson says. "Your mind was already made up against him, and his negatives can't go down any lower."

That's something Elizabeth Colbert Busch, Sanford's Democratic opponent in the special election, has taken into account. She appears to have decided it's less fruitful to raise the issue of his infidelity yet again than to try to distance herself from national Democrats in a heavily Republican district, for instance by criticizing President Obama's budget.

If Sanford prevails, it makes the rest of his life look a little less cloudy, says David, the Miami consultant.

"If you're the governor of South Carolina and you end up leaving office in this scandal, that's the last thing people are going to remember you for, absolutely, positively," he says. "If you go back and run for Congress, that makes the speaking engagement money a little better or the opportunity to lead an association a little easier for you."