Accessibility links
While Congress Slumbers, Laws Pass Elsewhere : It's All Politics During a time of paralysis in Washington, states are taking the lead on a whole host of issues, from guns and gay marriage to education and tax policy. Of course, not everyone applauds the laws they pass. The Daily Show's Jon Stewart recently called states the "meth laboratories of democracy." 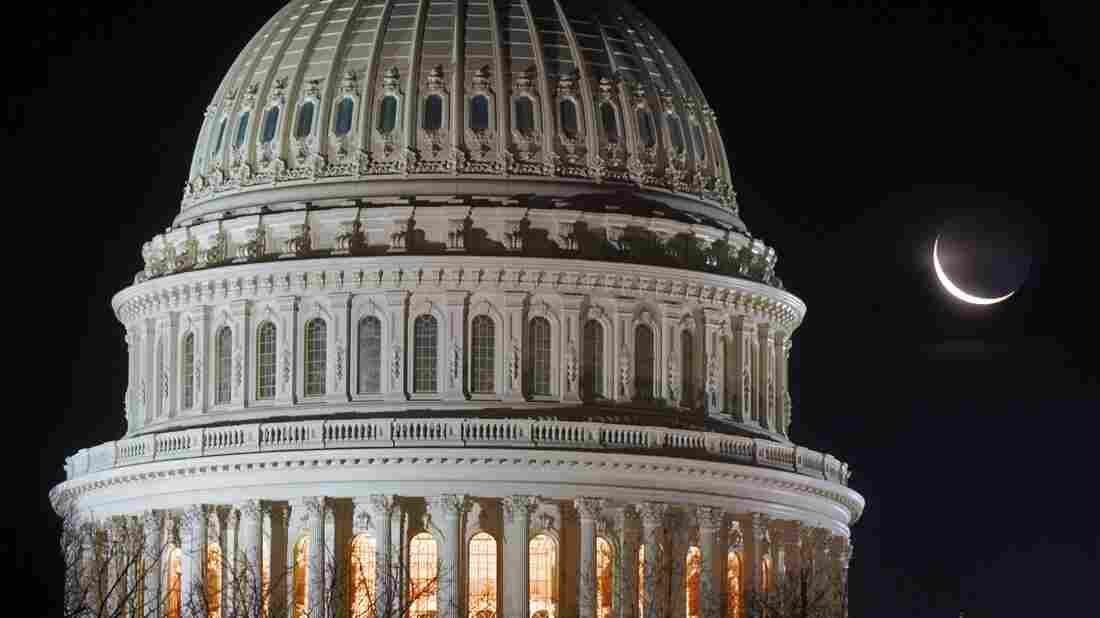 A sliver of moon rises behind the Capitol dome in Washington, D.C. While Congress has shown signs of life this spring, its veritable hibernation has left plenty of room for states to experiment with policy. Bill O'Leary/The Washington Post via Getty Images hide caption

Maybe Barack Obama would be happier as a governor.

It's early days in his second term, but the president's agenda doesn't appear to have a whole lot of momentum. His budget last week was greeted with more criticism than applause from Democrats and Republicans alike.

There's been a flurry of activity on Capitol Hill lately regarding immigration and gun control, but chances for Obama's proposals to make it into law remain uncertain. That's what life is like when you're working with a divided Congress and few bills can even make it to your desk.

But many of the ideas Obama favors have already passed into law out in the states.

He's made a habit lately of traveling to states that have enacted strict gun control legislation. "Connecticut has shown the way," he said in Hartford last week. "And now is the time for Congress to do the same."

It's a comment the president could make on issue after issue. Obama's hope of giving tuition help to college students who were brought to this country illegally as children has already been fulfilled in more than a dozen states.

States On The Move

Taxes: Blue states such as Connecticut and California have raised rates on top earners. Governors in states like Kansas, Louisiana and Oklahoma want to eliminate the state income tax altogether, but none has yet succeeded.

Abortion: On Friday, North Dakota's Legislature sent GOP Gov. Jack Dalrymple a "fetal pain" bill outlawing abortions after 20 weeks. This latest move comes after restrictions on abortion have been put in place in numerous states over the past two years.

Guns: While Connecticut, Colorado and New York have enacted new gun control laws, other states are moving to strengthen concealed-carry laws and other gun rights.

Minimum Wage: Nearly half the states (23) have minimum wage levels that are higher than the federal standard of $7.25 an hour.

Energy: After several years in which about half the states enacted laws designed to combat climate change, such as requiring renewal energy consumption, many are engaged in debates about allowing so-called fracking to extract natural gas.

Education: The bulk of states are revamping their curricula to match a new set of teaching standards known as the "common core." Many are moving away from a model of sending money to public schools, instead letting families decide among charters, private and parochial education, or home schooling.

The president's call during his State of the Union address to increase the minimum wage to $9 prompted yawns in Congress, but helped persuade legislators in New York to approve such a boost in March. Maine workers may soon get the same raise.

If Obama has reason to smile when he scans the horizon of state activity, conservatives are even happier. A proposal by Louisiana Republican Gov. Bobby Jindal to eliminate state income taxes recently blew up on the launching pad, but a number of states have slashed personal and corporate income taxes. Red states have also placed new limits this year on abortions and on labor unions.

It's a time of nearly unequaled legislative activity at the state level, even as partisan polarization means Washington can't get its act in gear.

"Congress is notoriously slow, and now it's gotten to where nothing happens, practically," says Marcie McNelis, chairwoman of MultiState Associates, a lobbying firm. "There are certainly businesses and industries and causes that say, 'I can't get it done at a national level, so I'm going to take it out to the state level.' "

Look To The States

The inability of Democrats and Republicans to see eye to eye in Washington has led lots of people to look to the states as friendlier and more productive venues. That's true not only for opponents of abortion, but proponents of gay marriage, legalized marijuana and environmental policies meant to combat climate change.

"A lot of these issues are more prominent at the state level than the federal level, because you know nothing can happen on them at the federal level," says Bill Pound, executive director of the National Conference of State Legislatures.

There's a lot of pent-up demand in states to address policy concerns, McNelis says, because they spent several years dealing almost exclusively with budget issues following the financial crisis of 2008.

Now, not only are states ready to make changes on taxes, education and health, but often there's an easier path toward passage than is currently conceivable in Washington. That's because partisan differences are playing out much differently elsewhere in the country.

Congress might be hopelessly divided between a Democratic Senate and Republican House, but in the vast majority of states, one party or the other now controls everything — often with legislative supermajorities.

As a result, Democrats are getting their way in blue states such as Connecticut and California, while the Republican agenda is unstoppable in Texas and Tennessee. "You're not deadlocked, necessarily, unlike the House and Senate, which seldom seem to agree in Washington," Pound says.

Washington remains the venue of choice for many interest groups. Business groups, in particular, have long looked for a single federal law to pre-empt states when they start creating differing sets of regulations.

As states pursue their separate paths, however, there's no federal authority to play referee. When it comes to individual rights, courts may step in — as the Supreme Court may do this term if they decide that gays have a right to marry nationwide.

In general, this Supreme Court has been respectful of states' rights — notably in finding that states don't have to participate in the expansion of Medicaid under Obama's Affordable Care Act. On Monday, the court refused to hear a case challenging a New York State law that limits the public's ability to carry handguns in public.

"The U.S. has always been historically a highly decentralized country," says Edward Rubin, a professor of law and political science at Vanderbilt University. "For the first 100 years, most of the basic forms of government were being done in the states. The only federal agent anyone would have seen is a postal agent, until the 1870s."

States have long taken the lead as policy innovators, acting as "laboratories of democracy," in one much-quoted phrase from 1932 attributed to Supreme Court Justice Louis Brandeis.

The first comprehensive workers' compensation law was enacted 102 years ago in Wisconsin and was quickly copied by more than 40 other states. Wisconsin's experiments with requiring welfare recipients to work became the model for the last major federal legislation on welfare back in 1996.

And although Mitt Romney was loath to admit it during last year's presidential campaign, the health law he shepherded through as governor of Massachusetts requiring individuals to buy insurance provided the template for Obama's own signature legislation.

Federalism And Its Hypocrites

Of course, not everyone applauds the laws that states pass — particularly at a time when various states are moving mainly in either liberal or conservative directions. Jon Stewart called them the "meth laboratories of democracy" in a Daily Show segment the other day mocking social policies in the states.

People are happy about states taking the lead only when their party is out of power in Washington, says Boise State University political scientist Gary Moncrief. "When it comes to federalism, we're all hypocrites," he says.

These things run in cycles. Congress steps in to impose a single standard when there is a clear national consensus on an issue, says Rubin, co-author of Federalism: Political Identity and Tragic Compromise.

But on most issues today, there isn't anything like consensus. That's why Congress can't act, leaving plenty of room for states to experiment.

"There is not likely to be as strong a role for Congress in picking sides between divergent state policies, because it gets back to the paralysis of the national government," says Tim Conlan, a federalism expert at George Mason University.