Accessibility links
Immigration Proves A 'Rubik's Cube' For Many Republicans : It's All Politics They don't want to offend Hispanic voters, but they don't want to turn off the GOP base either, says Ron Bonjean, a former Republican leadership aide. And competing for Hispanic votes is not a top priority for the sizable number of Republican rank and file who still see the bill as amnesty. 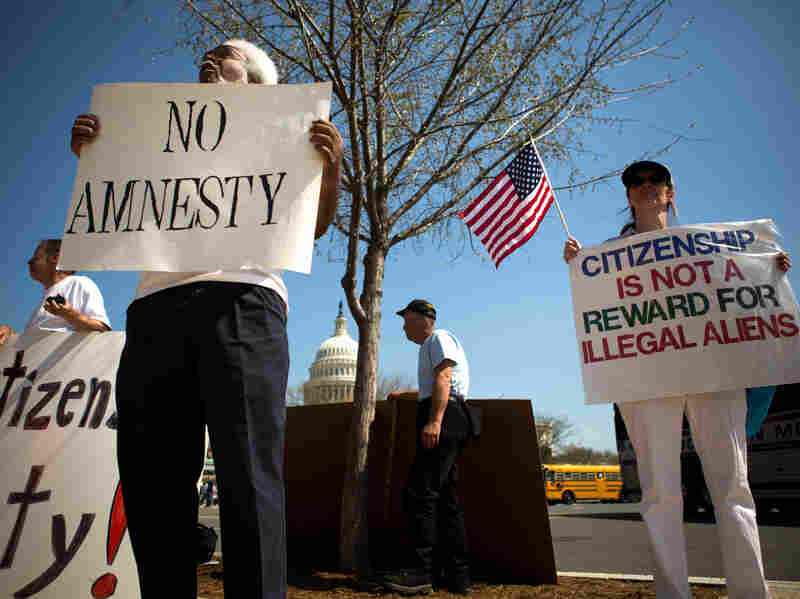 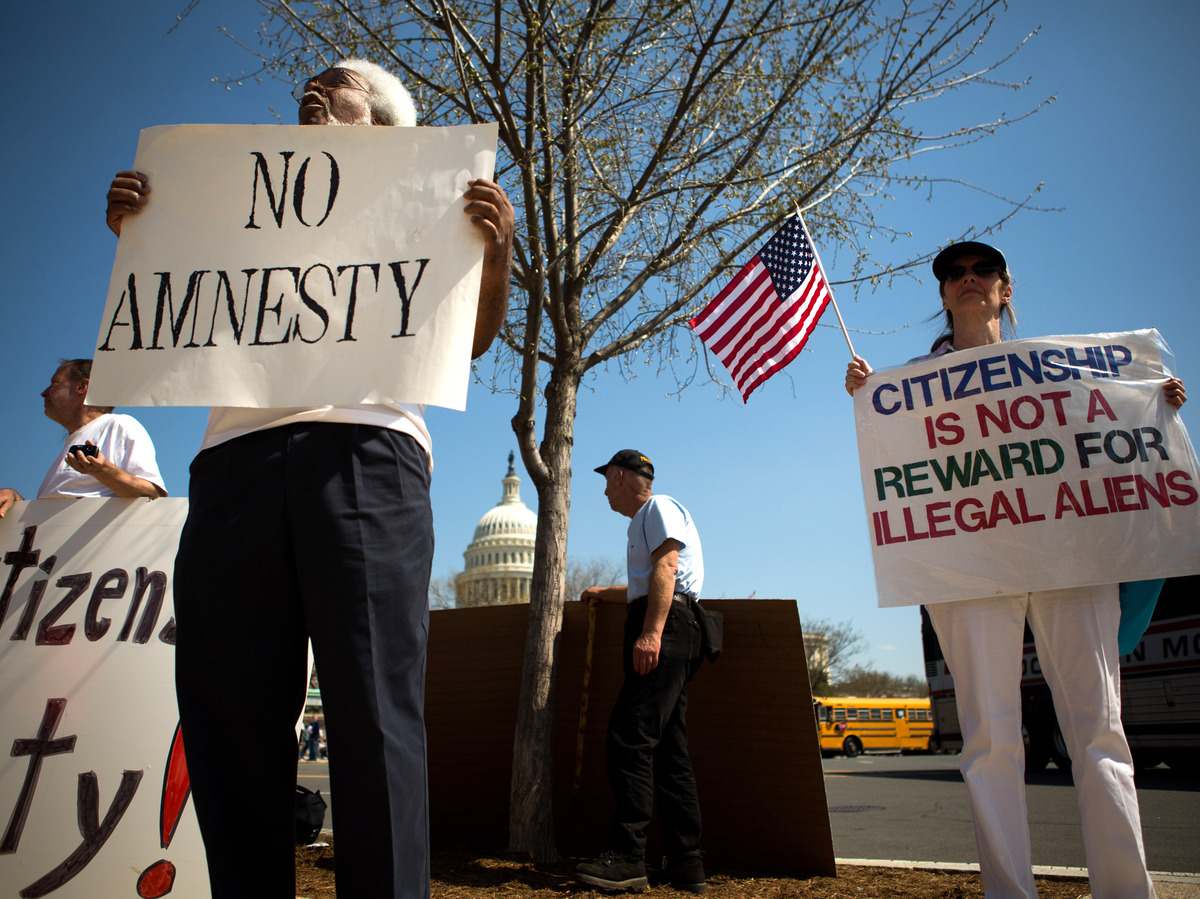 Protesters demonstrate in front of the U.S. Capitol on April 10.

While an immigration overhaul has drawn support from church groups, business, labor and even former opponents, there's still deep opposition — mostly centered in the Republican Party.

The last time a president tried to pass a comprehensive immigration overhaul was in 2007, and George W. Bush's fellow Republicans in Congress killed his bill. Republican strategist Kevin Madden says a lot has changed since then — including the way the Republican Party is dealing with its own internal divisions.

"The difference between success and failure this time around will be whether or not those that are very interested in seeing a solution arrived at recognize those objections as substantive and work to either remedy them or address them in some way," Madden says. "What we cannot do is demonize those who happen to disagree."

Florida Sen. Marco Rubio, the GOP's point person on immigration, understands this very well. That's why in a record-breaking round of seven Sunday TV appearances last weekend, he had the same message aimed at the same conservative audience, in English and in Spanish.

"This is not amnesty. Amnesty is the forgiveness of something," he said. He also repeated the idea that the current system is "de facto amnesty."

Rubio has also, perhaps more importantly, made the rounds of conservative talk radio, where he has received a warmer welcome than might have been expected.

"I think the Tom Tancredo days within the party are over," says conservative radio host Erick Erickson, who also runs the blog RedState, "if only because of the shell-shock results of 2012 that the base has had to suffer through."

Erickson says this time around many groups that were previously against an immigration overhaul have changed their minds — such as "some of the local Chambers of Commerce that have been suspicious in the past, some of the Tea Party groups."

Especially since Paul, the de facto leader of the Tea Party in Congress, is also in favor of a comprehensive bill.

Ron Bonjean, a former Republican leadership aide, says he thinks there's a recognition among "hard-line conservatives that are anti-amnesty that they do need the Hispanic voters in 2016, that ... there's a long-term threat to the existence of the Republican Party."

But competing for Hispanic votes is not a top priority for the sizable number of Republican rank and file who still see this bill as amnesty.

"I really respect the work of the Gang of Eight," Alabama Sen. Jeff Sessions said on ABC. "But they have produced legislation, it appears ... that will give amnesty now, legalize everyone that's here effectively today and then there's a promise of enforcement in the future."

Beyond the Beltway, in the first caucus state of Iowa, conservative talk show host Steve Deace thinks anyone who supports the bill will have a liability in 2016.

"There's not an overwhelming majority of people in a Republican presidential primary in 2016 that are going to go to the polls to vote because of illegal immigration. But those who will all are against anything that looks like any path to citizenship, any amnesty at all," he says. "That's really where the passion on the issue is."

And that's why this issue is so difficult for the GOP, Bonjean says.

"For Republicans, this is the Rubik's Cube," he says. "In order to get this done, they have to walk a fine line from not offending the Republican base — and ... trying not to offend Hispanic voters."

But time is not on the side of Republicans who want to work out their internal party politics on immigration carefully and slowly. The legislative clock is ticking. The closer it gets to the 2014 election season, the harder it will be to pass anything.