Accessibility links
Obama Uses And Loses Political Capital On Gun Control : It's All Politics The president had put his political weight behind expanded background checks. But if he couldn't get an important win on a popular measure in a Democratic-controlled Senate, what's in store for other parts of his second-term agenda? 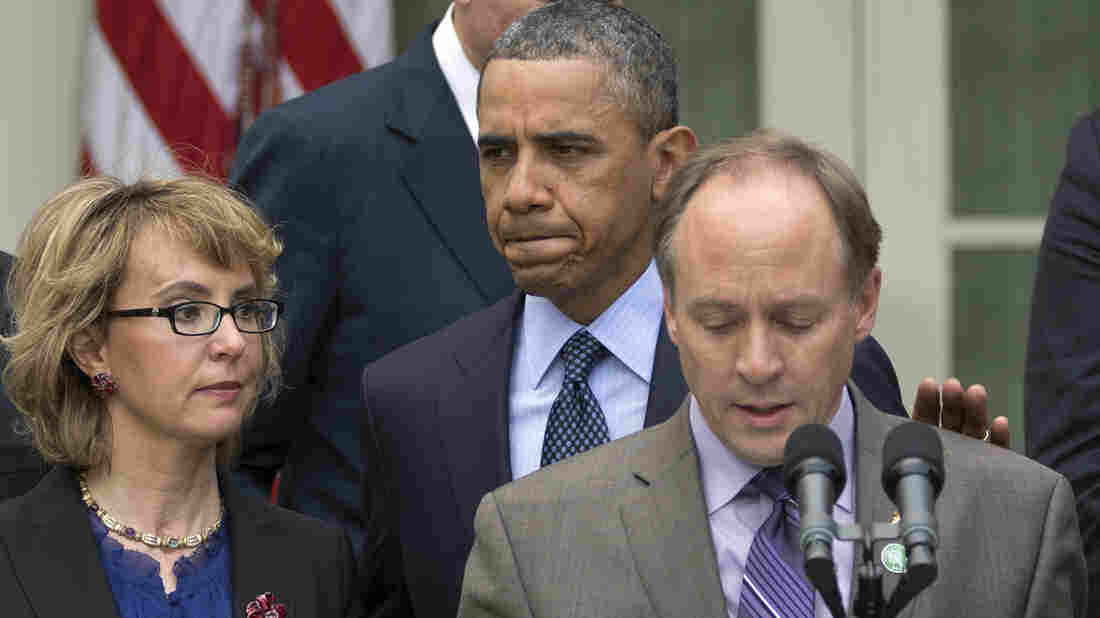 Mark Barden, the father of a young Newtown, Conn., shooting victim, speaks at a White House news conference on Wednesday, with President Obama and former Rep. Gabby Giffords. Obama denounced the Senate's defeat of a measure to expand background checks for gun buyers. "This was a pretty shameful day in Washington," he said. Carolyn Kaster/AP hide caption 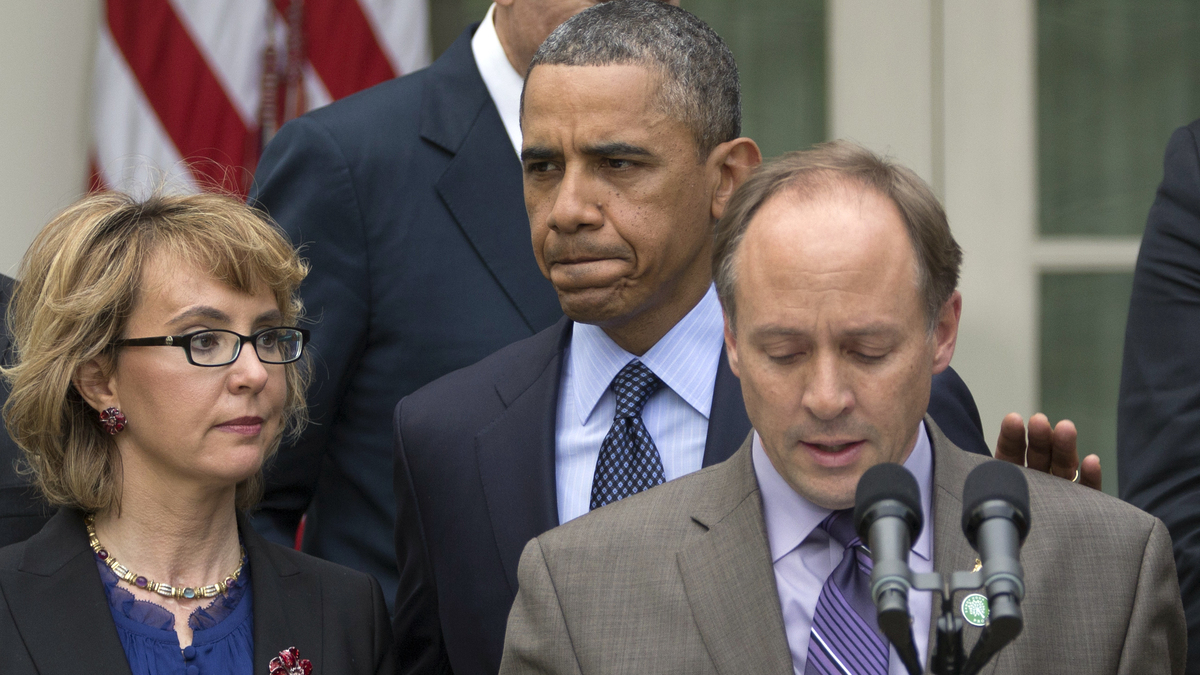 Mark Barden, the father of a young Newtown, Conn., shooting victim, speaks at a White House news conference on Wednesday, with President Obama and former Rep. Gabby Giffords. Obama denounced the Senate's defeat of a measure to expand background checks for gun buyers. "This was a pretty shameful day in Washington," he said.

The Senate's rejection of more robust gun purchase background checks was a stinging blow to President Obama that raised questions about his second-term agenda.

Expanding background checks had become a key part of Obama's post-Newtown push for tougher federal gun control laws. And in recent weeks, the president had campaigned for overall gun control legislation — especially the bipartisan background-check compromise — with a sense of urgency.

But neither the president's campaigning or plaintive personal appeals by family members of the Newtown victims, some of whom witnessed Wednesday's Senate vote in person, were able to push the Senate to cast the 60 votes needed to move the measure forward.

At a news conference, an obviously angry Obama blamed the loss on what he called NRA distortions of the legislation's purpose:

"The point is, those who care deeply about preventing more and more gun violence will have to be as passionate and as organized and as vocal as those who blocked these common-sense steps to help keep our kids safe. Ultimately, you outnumber those who argued the other way. But they're better organized, they're better financed, they've been at it longer and they make sure to stay focused on this one issue during election time."

The amendment introduced by Sens. Joe Manchin, D-W.Va., and Pat Toomey, R-Pa., fell short in a 54-46 vote. Five red-state Democrats up for re-election voted with most of the Republicans against the measure.

If Obama couldn't get an important win in a Democratic-controlled Senate on a measure that had overwhelming public support, according to polls, what's in store for other issues?

"He's using political capital, and when you use political capital this way and you lose, it hurts," said James Thurber, an American University political science professor and director of the school's Center for Presidential and Congressional Studies.

But, Thurber added: "There will be new policies, new events that will come that will help him. He isn't a total lame duck, even though it's his second term. He still has a lot of power in certain areas, and certainly in the area of immigration he's going to have some leverage in terms of helping to bring a bill through the Senate and the House."

Still, Thurber says the administration bears some blame for not organizing its side well enough in the face of the well-funded and well-organized National Rifle Association.

"He's gone above the heads of Congress. He's used grass roots," Thurber said. "I think he has not been effective, however, in building a coalition, particularly a coalition that reaches over to the other side — gun owners and NRA members. ... There's no contest in battling the NRA if you don't have a similar organization on the other side. The president doesn't have that organization and therefore, he's failed."

Organizing for Action, the advocacy group Obama's 2012 campaign transformed into, was simply no match for the NRA. And neither was Obama's rhetoric.

"You cannot simply deliver votes by giving speeches in this case," Thurber said.